By now, maybe you have succeeded at bringing in and setting up the tree, which reaches almost to the ceiling. Of the second floor. You’ve bought or made enough wreaths to hang in every window facing the street, and nailed the largest one to the front door, making bows and checking lights for every single one. And you’ve strung enough garland, that if stretched from end to end, would reach from the front curb to the back fence. Great. But you’re not finished yet! Go to the attic and retrieve those boxes full of keepsake holiday items, stuff ranging from your childhood to yard sale finds, and something given to you just last year. Now, find a place and a way to use them. Small holiday elements grouped together can make all the difference in the world in how really well decorated your house is for the holidays. 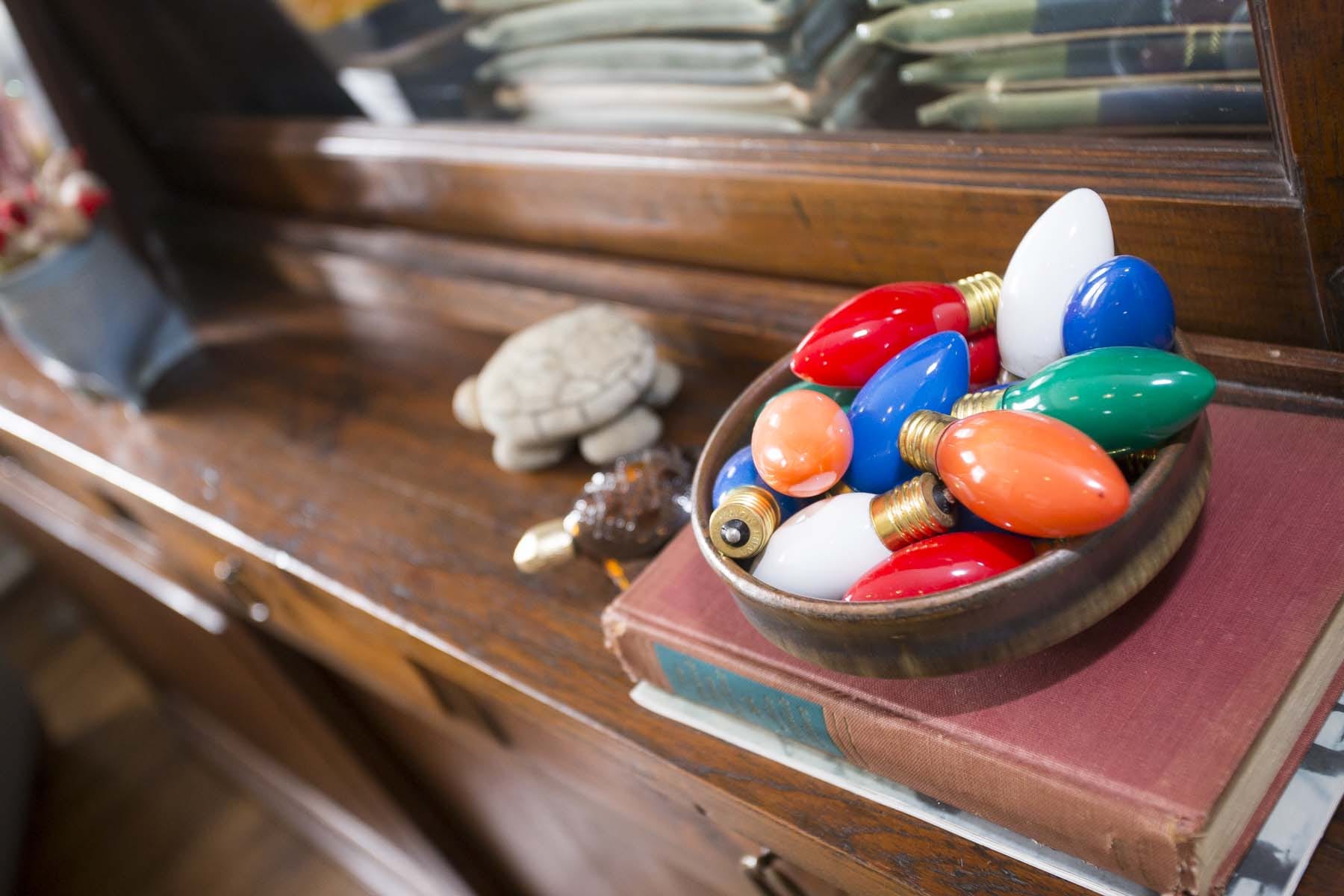 END_OF_DOCUMENT_TOKEN_TO_BE_REPLACED

Would you like to put your own stamp on holiday decorating? If this question was posed on a survey, responses would overwhelmingly be in the affirmative. Who wouldn’t want to use elements, colors, and a decorating scheme that matches their own taste and color preferences. But time after time, we haul boxes down out of the attic and set up the same red-and-green color pairing, along with the same items we dust off and place around the room.

I think you can decorate for the holidays and put your own personality and references in it, all without much work. Pick two colors you want to use. They can be hot colors, or cool. ‘Hot’ refers to reds and oranges, ‘cool’ to their opposites on the color wheel. A pairing of these colors works best because you want to limit your theme, so it’s readily seen. I love cool colors, and have accessories throughout my house that reflect my predilections. You will, too. And, instead of adding all the individual items that proclaim Christmas, limit them. I chose to use ornaments solely for the simple reason I have so many. Think about those boxes in the attic; I bet you have a lot, too. Use a mass of these items, not just a few, and pile them up. 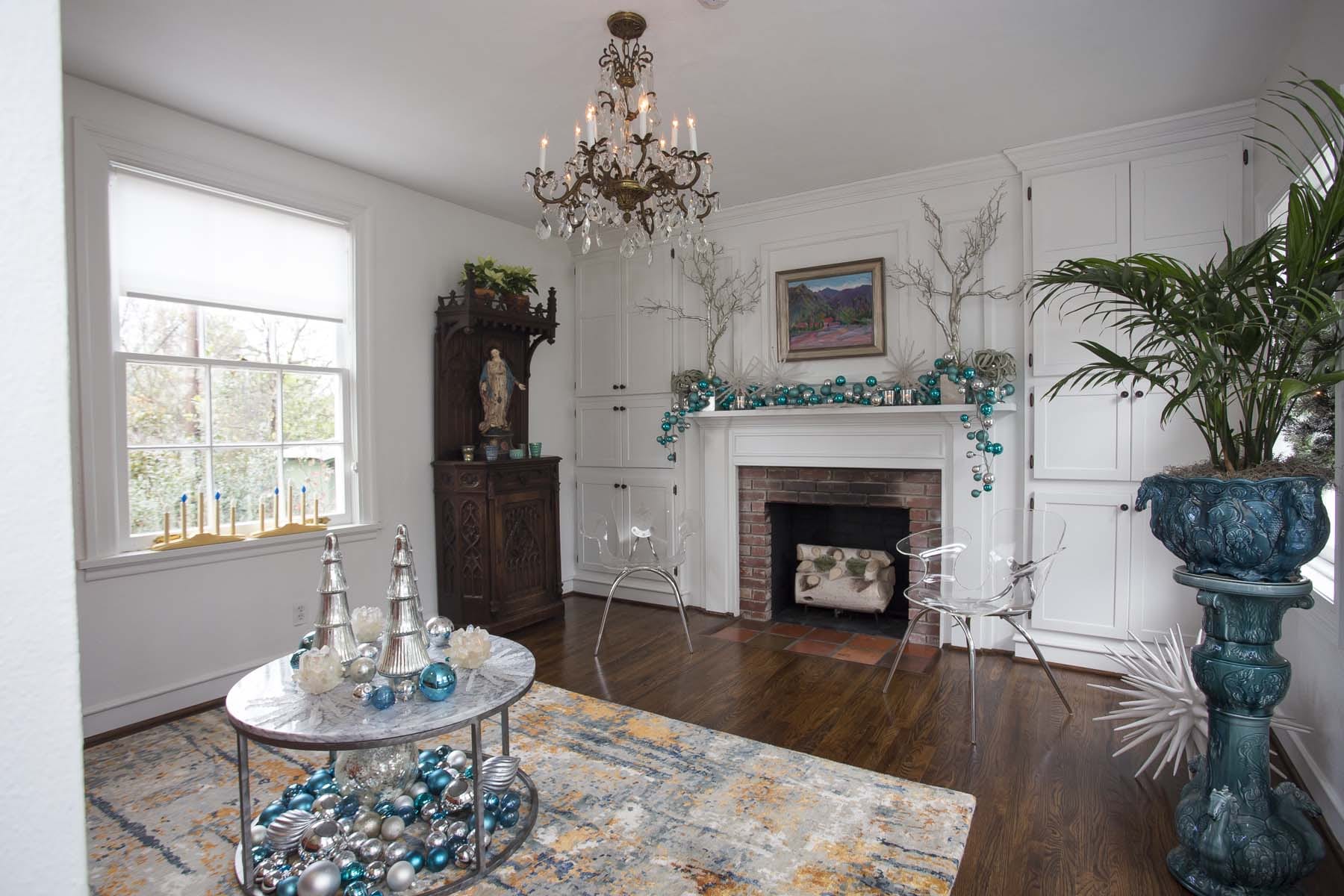 END_OF_DOCUMENT_TOKEN_TO_BE_REPLACED

There’s a lot to be said about meeting people’s expectations when it comes to seasonal decorating. After all, you don’t use shamrocks for Valentine’s Day, or lush banks of blooming flowers for the Halloween show on your front lawn. But you aren’t limited to a certain number of elements or prescribed colors every time you create a seasonal show. Many elements can be injected into your holiday tablescape that are not just unusual in themselves, but also bring in a color you might not have thought to use before. And that color can be from the purple family.

The color range for fall decor is typically restricted to the fiery tones, and for good reason. Ripened squash and pumpkins are always in various oranges or yellows, leaves turn into flame, mature wheat and cornstalks are, well, the color of mature wheat and cornstalks. But think back to art class and that color wheel. The use of contrasting colors, which are found on the opposite side of the wheel, can bring a bit of zing into your design. And they don’t have to be wildly exotic. Using African violets and a thrilling cerise phalaenopsis—both of which can be found at my nursery, as well as lots of other sources—can add a much-needed note of newness to your design. 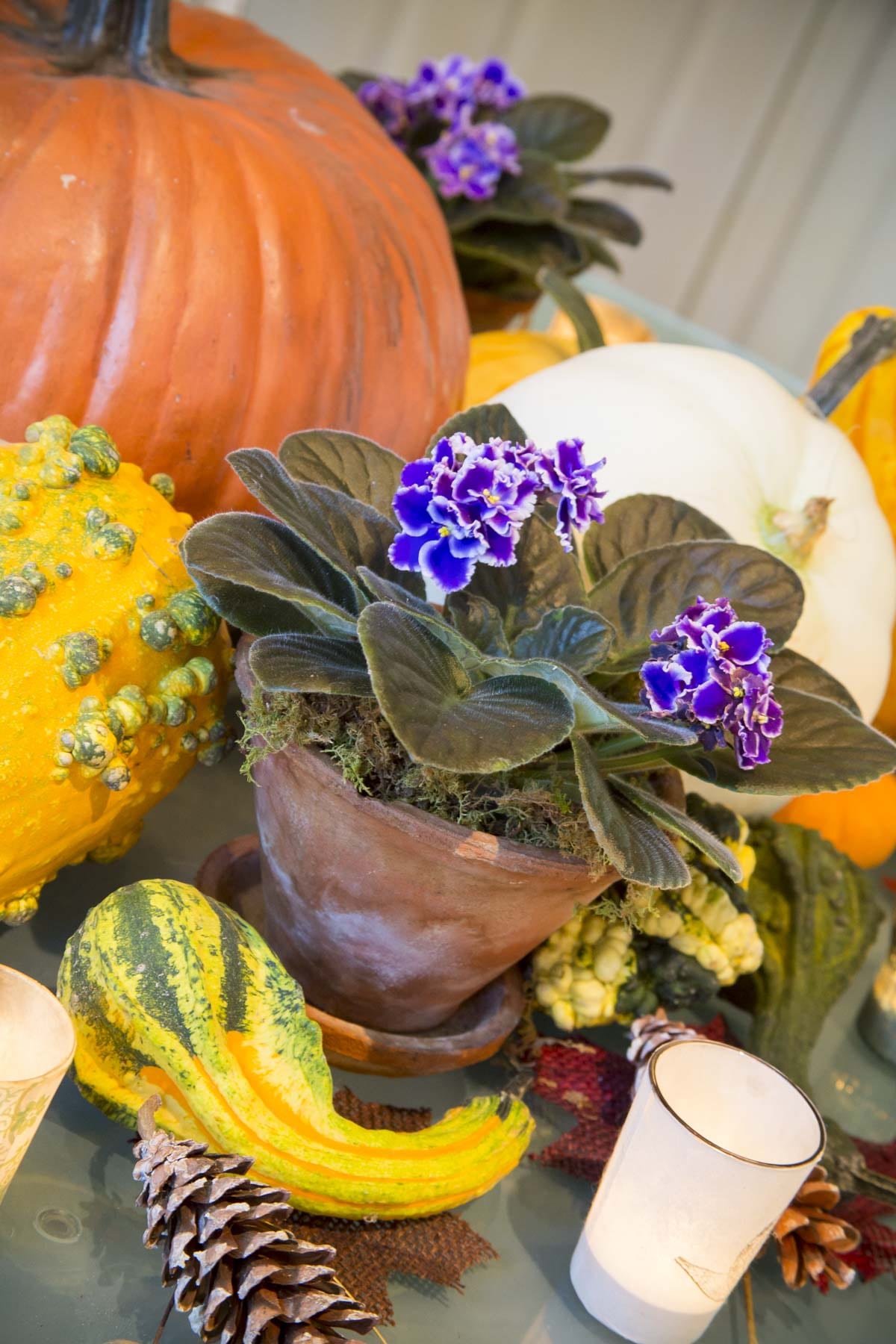 END_OF_DOCUMENT_TOKEN_TO_BE_REPLACED

The end of summer is a bittersweet time, but it’s also when certain crops are ready for market. And many of your summer annuals, so vibrant and luscious during the hot months, are now showing their age and wear (though some seem to thrive even now, at the end of the season—I’m looking at you, dragon-wing begonia). The last of the hay has been baled, apples and pears are beginning to tumble into the stores and farmers markets, and muscadines are ripe, a fact not lost on true Southerners. So here comes the fun stuff: pumpkins. 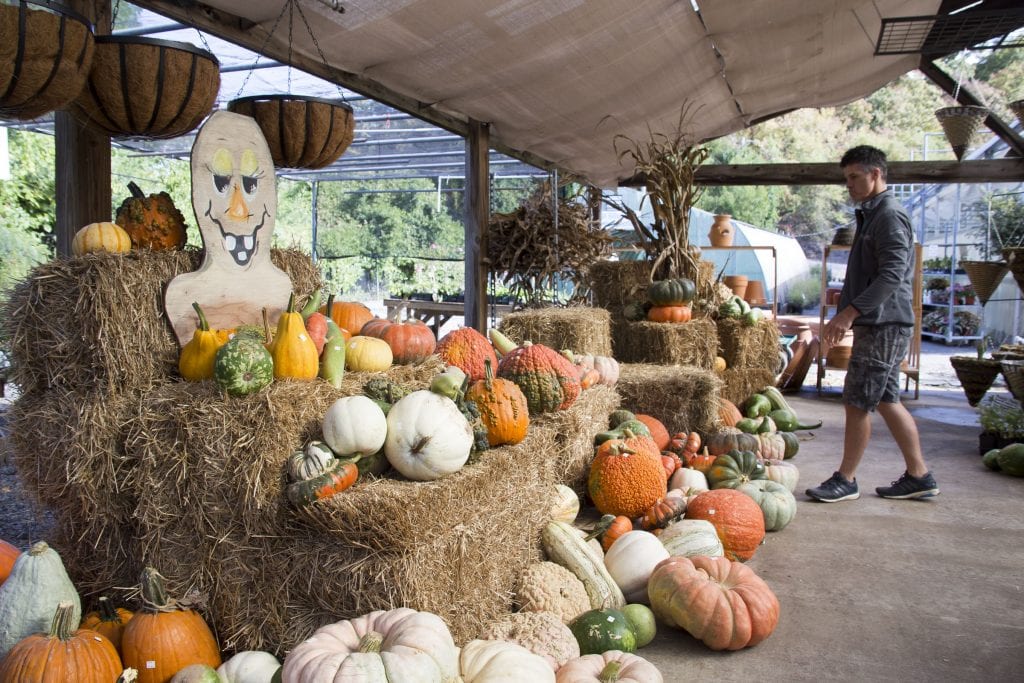 Above: A typical display we have at both Botanica and Plantopia. With such variety, how could you go home with just one? Mix the colors, combine shapes, stack them all cheek-to-cheek. There is no formal pattern for your fall display.…

END_OF_DOCUMENT_TOKEN_TO_BE_REPLACED

Often when we buy a house, we inherit rooms or areas that we don’t get enough use out of, or that we simply don’t care about. Just because a room is part of the structure, with a defined use, doesn’t mean you have to use it as it was originally planned. The room you’re going to see in this post was never actually a room; it was a garage. Actually, a carport—something with even less dignity. I had one already, so I decided to make this a functional room, with a door directly into the outside. I wanted more areas for seating, good light, and elements that echo the Spanish colonial design of my house. What does that last part mean? I needed terrazzo floors, architectural arches, a fireplace with a hearth, and stucco walls. By extending the theme of my house with this new room, I was able to keep it from looking like it had been added on. I wanted seamless design throughout. 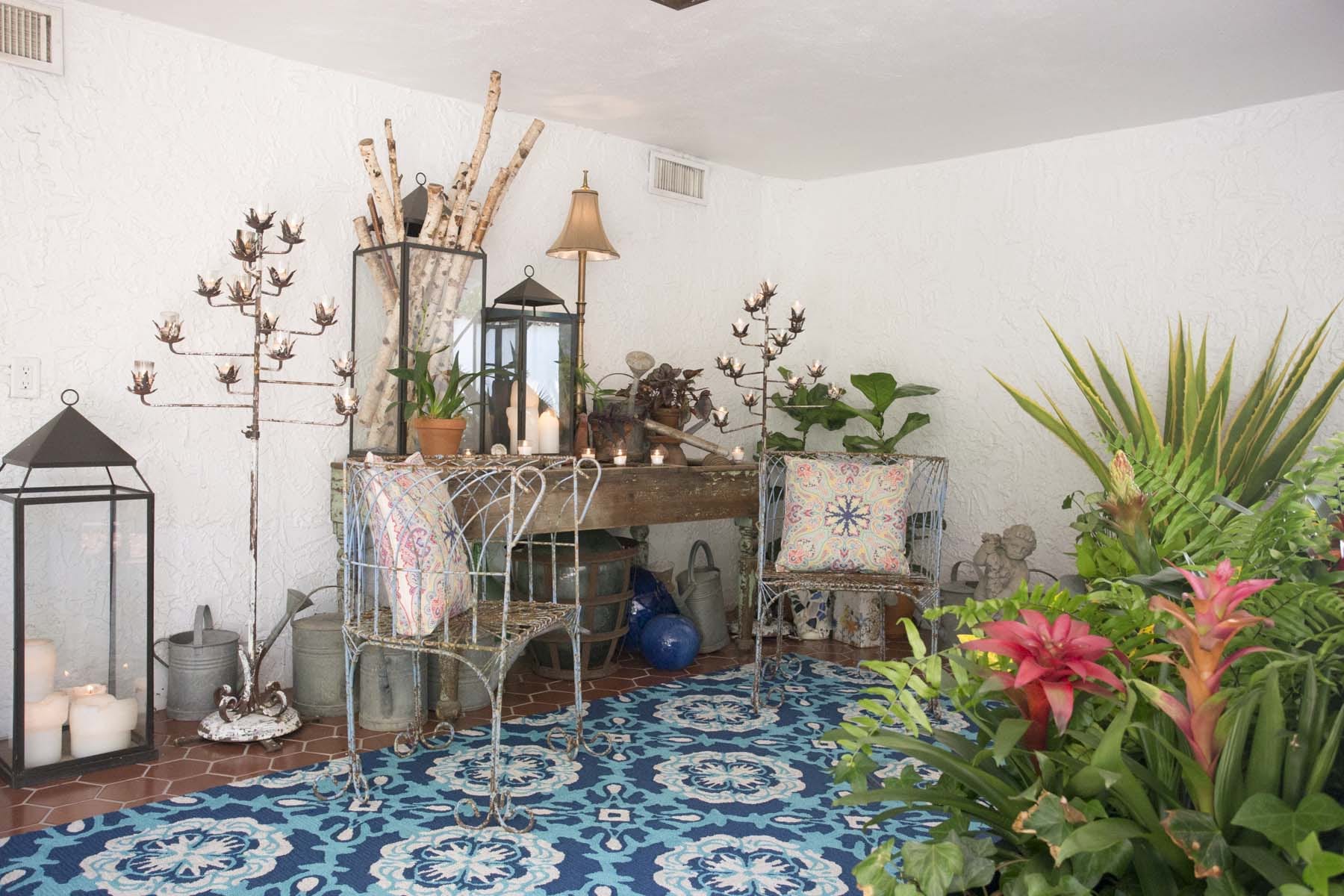 Looks like a nice room, right? No traces of cars or exhaust. In keeping with the Spanish design of my house, I brought in elements that underscored it. A worn farm table, wrought iron anything—including chairs and candelabras—a simple rug that zings with color, and plants associated with the desert southwest. Attention to detail can pay off. Nothing was pricey, but all fit within my design guidelines.

END_OF_DOCUMENT_TOKEN_TO_BE_REPLACED

I own a cool store. And I offer many bright and shiny objects for sale, in addition to plants and gardening supplies. But I also think that everything in your landscape does not have to be bought new. While it may seem startling that I’d say such a thing, it really isn’t. After all, I’m in the landscape business, and what is a garden anyway? It’s a mass of energy, color, and growth that is always changing, evolving and, above all, renewing itself. Take that idea in stride and look at what you already have. You can redefine an area of your garden by recycling and reimagining something that is maybe stacked away and forgotten, and through repurposing, create a sense of wonder and newness. For example, I needed to define the end of the terrace and patio, but I wanted to create something of interest, so here’s what I did. 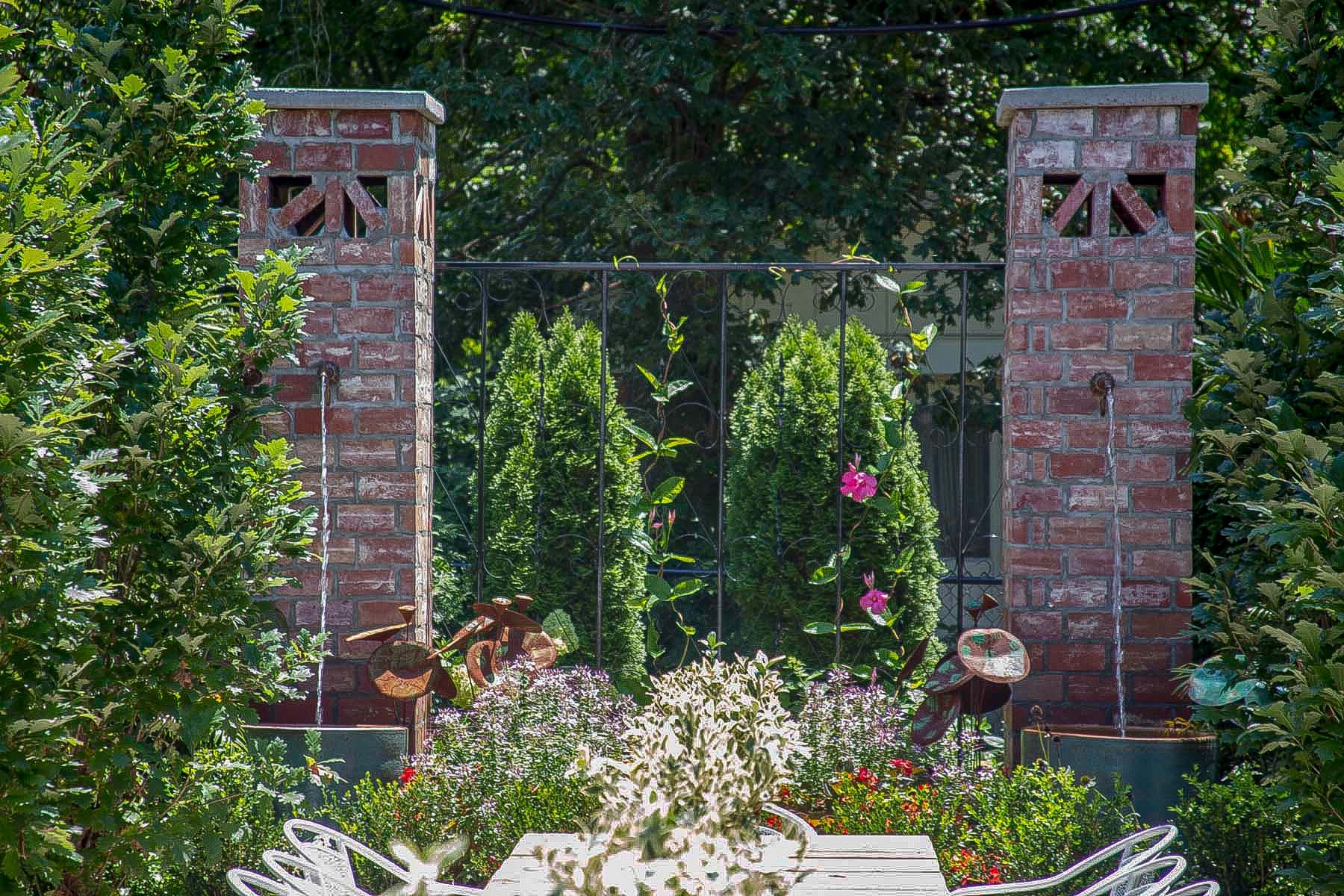 END_OF_DOCUMENT_TOKEN_TO_BE_REPLACED

You will have lots of choices this time of year when it comes to places to source and buy plants. Even those of us who live in small towns can drive to a big box store, one of those places with acres of parking and thousands of plants. The problem with those behemoth home improvement stores is that you can rarely find a knowledgeable person to answer your plant questions, and the inventory–while deep–is rarely varied, much less stimulating. Geraniums, anyone? Buying plants for your yard and garden should be a thoughtful process in order to ensure vigorous growth, color, and great seasonal display. And, you should have questions about plant growth habits and requirements, which will need answers that consist of more than a shrug. I’m in the plant business, and this is my opportunity to show you why buying from a typically smaller landscape and garden center can give you great return on your time and investment. 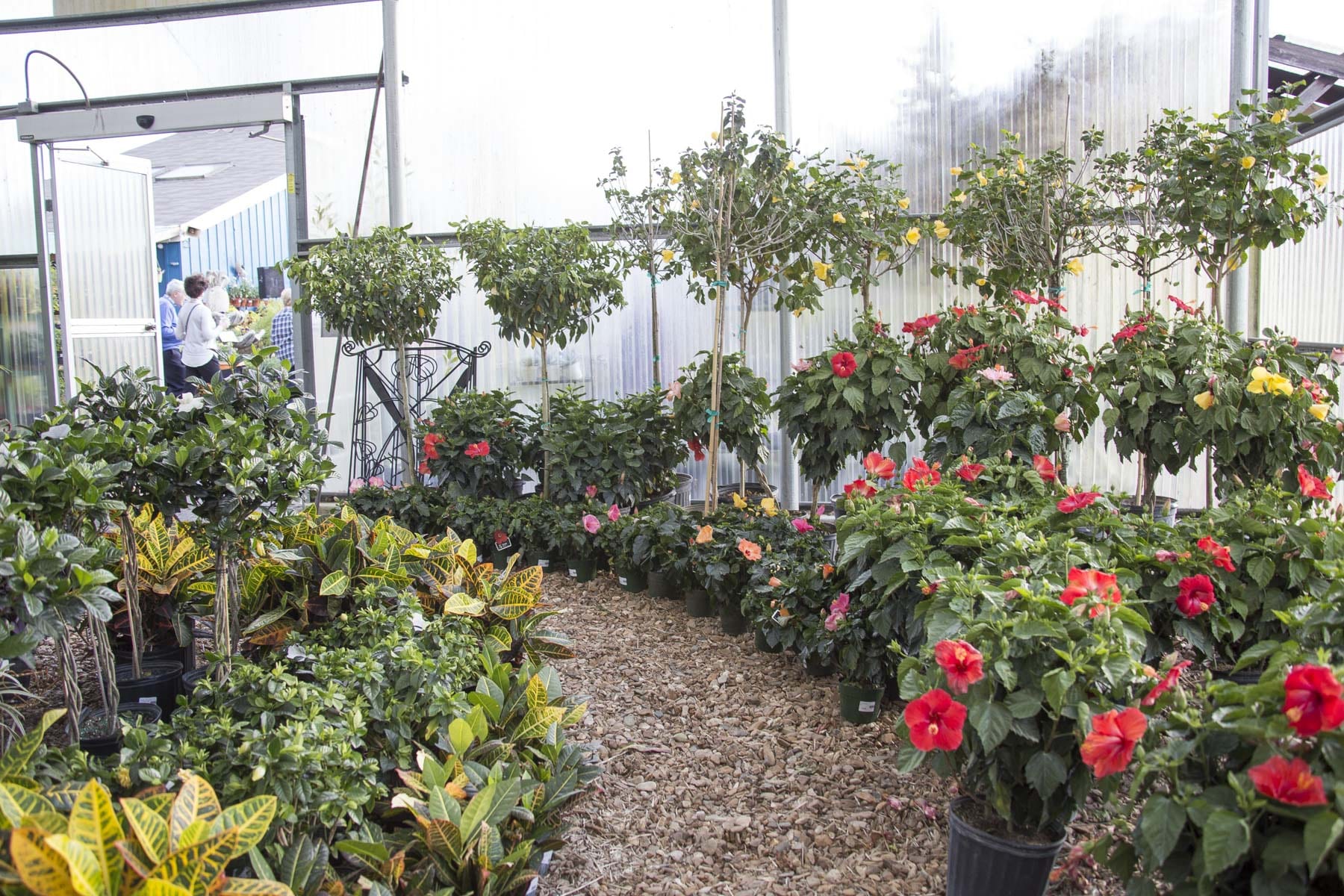 END_OF_DOCUMENT_TOKEN_TO_BE_REPLACED

Europeans have long known something that Americans are only just now finding out: You can create a “room” for entertaining within your landscape. And it won’t take a carpenter to do it. If you have a courtyard, patio, or level area in your yard that is wide and long enough to turn into a rectilinear space for table, chairs, and plants, you can treat your guests to a real indoors-goes-outdoors experience. Define the space and mark the “walls” with large specimen plants (read: dwarf or semi-dwarf trees), then plunk a table down between them. Add seating, accessories, personal touches, and then you have it. A delightful area for dining and conversation. 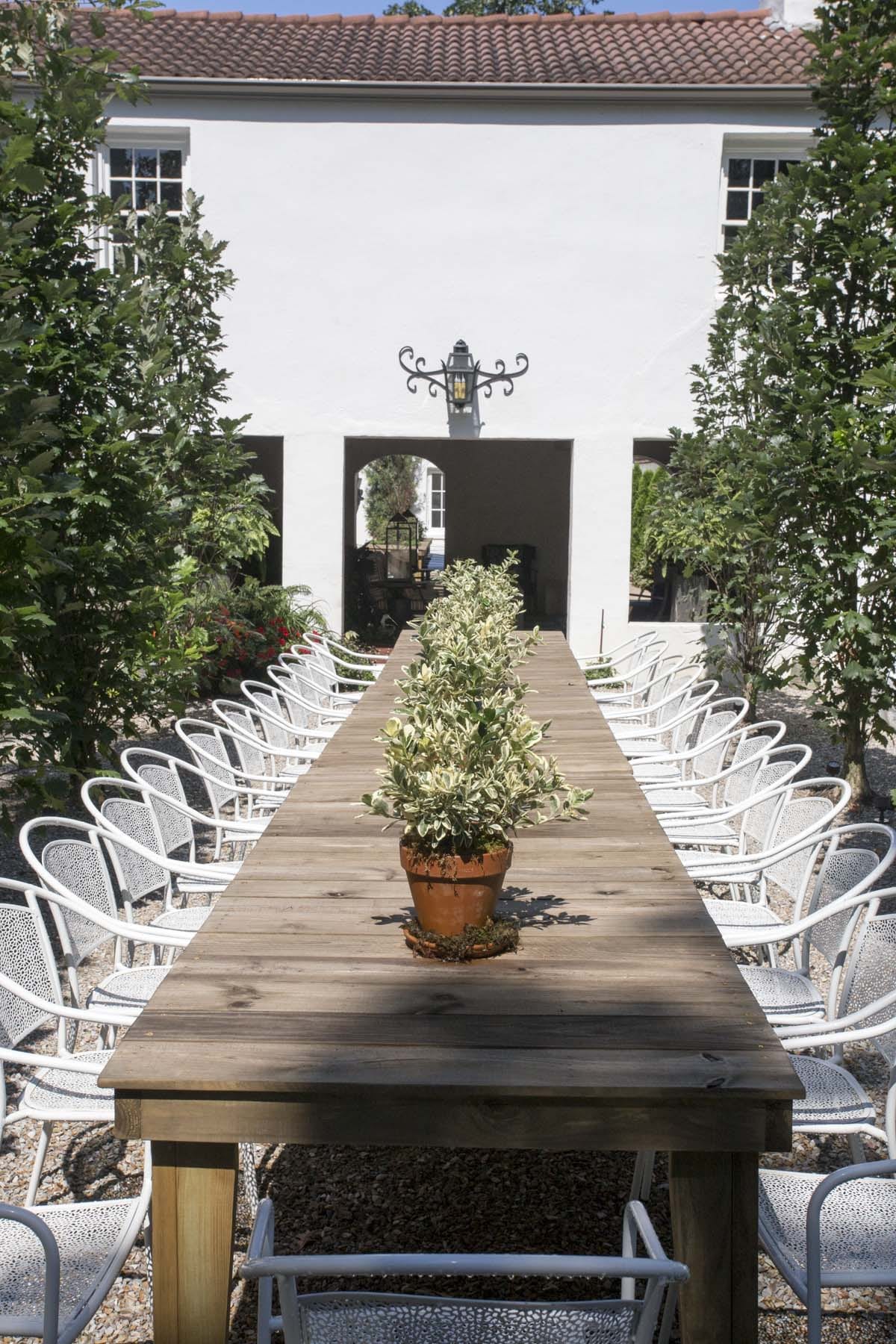 END_OF_DOCUMENT_TOKEN_TO_BE_REPLACED

You may not think a lot about walls, but they work on many levels at a property. They can keep something in or out, provide demarcation and boundary, and serve as punctuation for a landscape. They’re the very definition of utilitarian. But I have a question for you: do they have to be strictly about purpose, with nothing left for aesthetics or pleasure? I think a wall can become part of your plantings, which will mean seasonal interest, color, and a bit of something unexpected in your landscape. 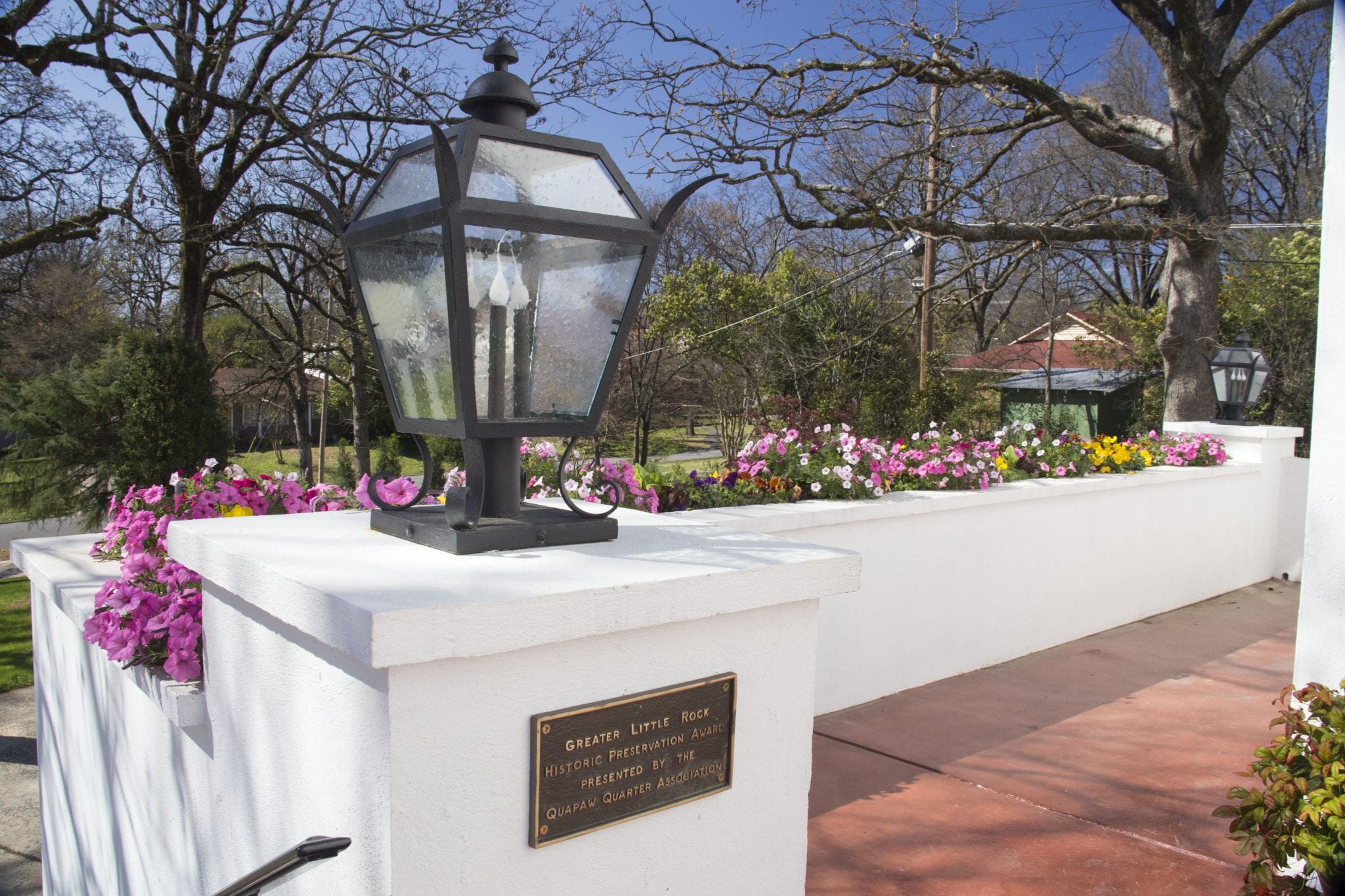 END_OF_DOCUMENT_TOKEN_TO_BE_REPLACED

Suburban houses usually come with a pre-poured concrete sidewalk. That idea is so pervasive we don’t even think about it. You arrive at your friend’s house, get out of the car, and stroll up the walk. A walk invariably flanked by green grass, carefully manicured and fed. What if you want to be just a little different? You can tear up the sod and replace with hardy perennials that will provide interest, no matter the season. And you can bisect your new planting area with a clearly defined pathway, which is both decorative and functional. People are beginning to discover the pleasures of plants, as opposed to sod, and adding rock strewn paths to provide for a pleasing note of individuality. 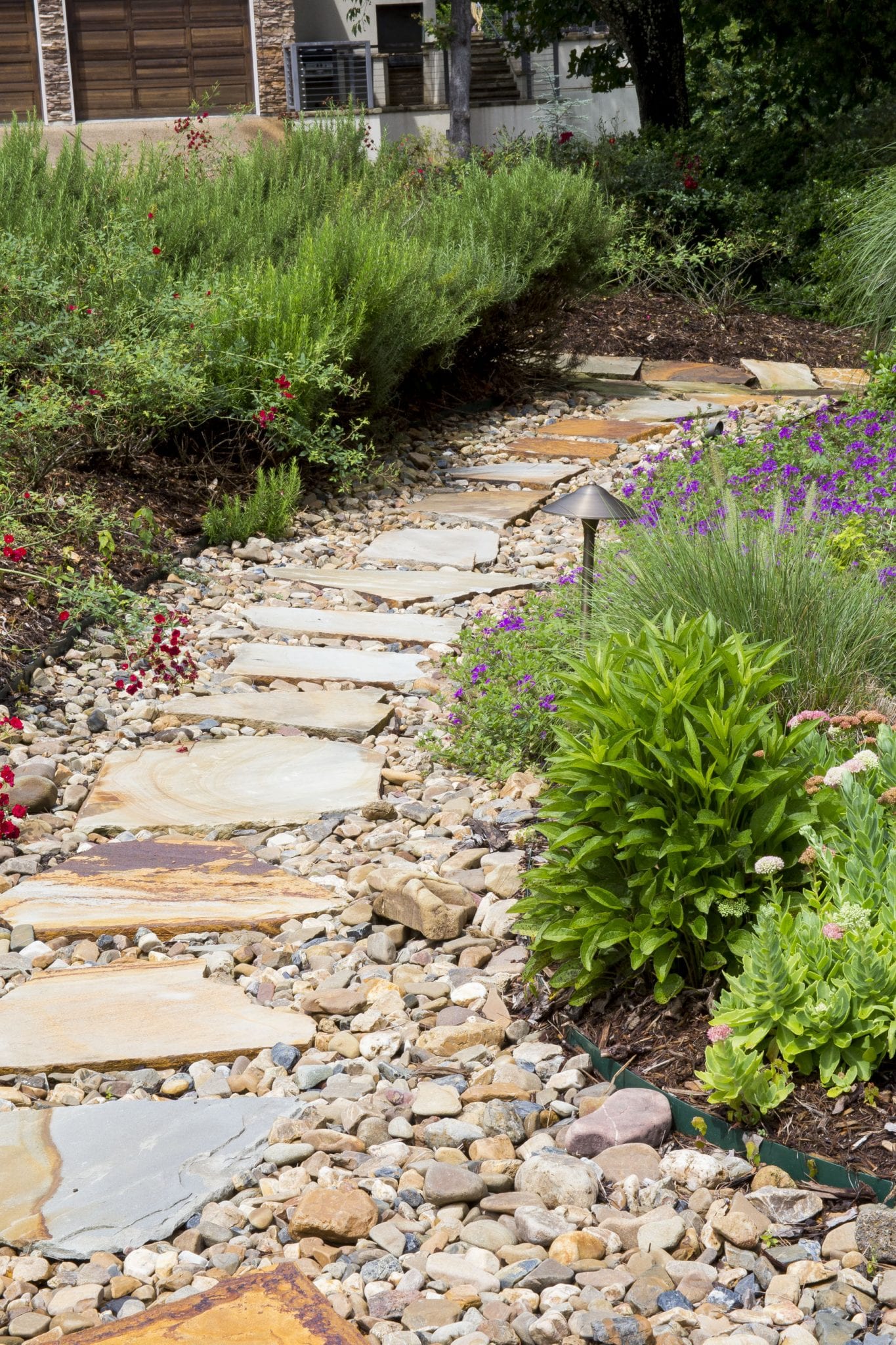 Once the sod was removed and the plants installed we provided the path. The idea came out of the need to access the backyard by maintenance crews. You can’t drive a mower through the plants, so what do you do? We levelled the designated—curved–area and created a bed for both large flat pavers, and plenty of rock. The pavers are for stepping, the surrounding rock for interest and drainage. And take a look at the perennials we chose; all are rugged, dependable and fit the proportions of the space. Nothing could be worse than having to dig and remove specimens on a regular basis that have outgrown their allotted segment. We chose a complementary mix of rudbeckia, verbena, salvia, rosemary, and other specimens chosen for their growth habits (more rounded than tall, more cascading than upright)….