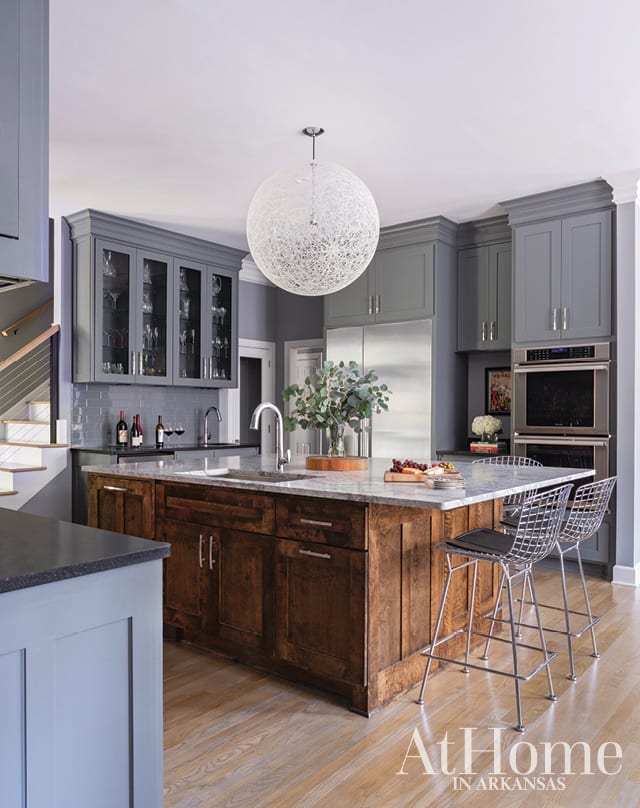 “We lived right downtown, and it was hard to have a place for him to ride a bike,” Leslie explains. When she and her mother first walked into this house, she immediately saw past its traditional, walled-in layout to a house they could soon call home. “The second time I saw this house, I had my designer and contractor come to make sure that what we wanted to do, we could do,” Leslie says. “What we could do in the kitchen and bathroom would make or break the decision to buy the house.”

While in Chicago, Leslie and Charley had connected with designer Scott Paterek, who has a shop there (Norcross and Scott Home) as well as Little Rock’s Massimo Interior Design. They had him over to their loft to get an idea of their style before the move; this was instrumental in helping Scott and Tammie Weaver, also of Massimo, visualize how the Parnells would live in their new space. 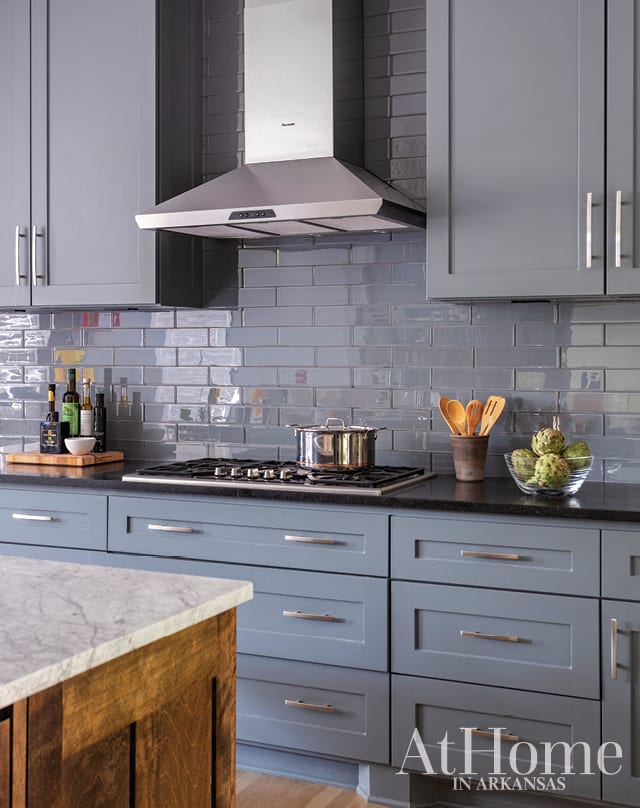 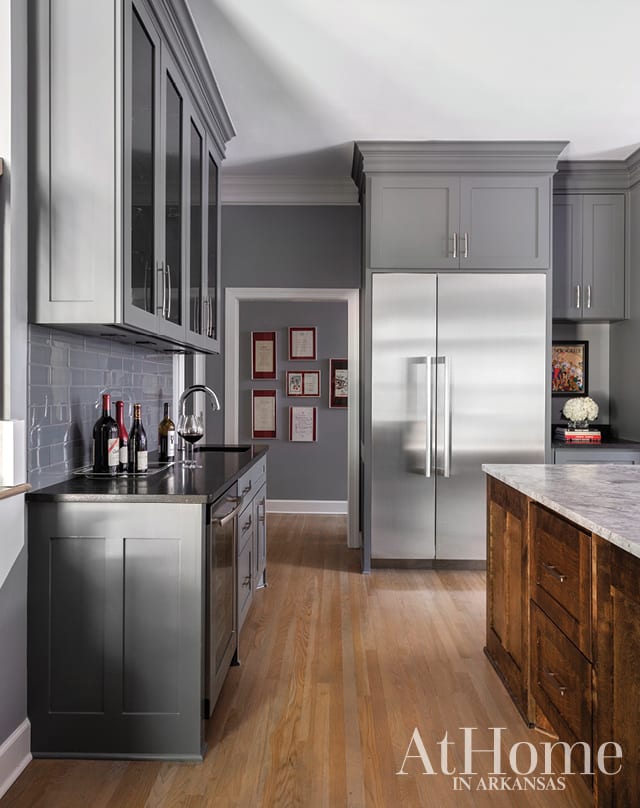 A collection of framed menus is displayed in the hallway just outside the kitchen. “That started right after we’d gotten married. The first anniversary gift is paper; I wrote to a restaurant we ate at on our honeymoon, and they sent me their menu,” Leslie explains. “Now, any time we go out for an anniversary or special occasion, we’ll get the menu signed and dated by the chef.”

“It was mostly taking out walls,” Scott says. “The kitchen was isolated, and the staircase completely cut the house in half.” The team ended up taking out 4 to 5 feet of wall around the enclosed staircase and moving the kitchen wall with the range back about 4 feet, removing an unnecessary hallway in the process. “The combination of those two things really changed the view lines. Now the living room communicates to the kitchen,” Scott says. “That was important to them.”

“I love the openness of the kitchen and the whole downstairs,” Leslie says. “It’s the center point of the house, and no matter what room we’re in, there’s an awareness and togetherness because it’s so open.”

The couple and two designers worked together to come up with a cool color palette and mixture of materials that conveys easy sophistication throughout the house. “They liked the gray color family and wanted a really clean look, and we leaned into the darker cabinets to give it a little oomph,” Scott says.

A few other smart changes helped the space make more sense for the family. A nook under the stairs was transformed into a wine closet and given a glass panel to make it feel more like an intentional addition to the kitchen. “From an aesthetic perspective, we wanted the design to be contemporary,” Leslie explains, “but we also wanted it to be useful for everyday life. This gets more use for us as a wine closet.” 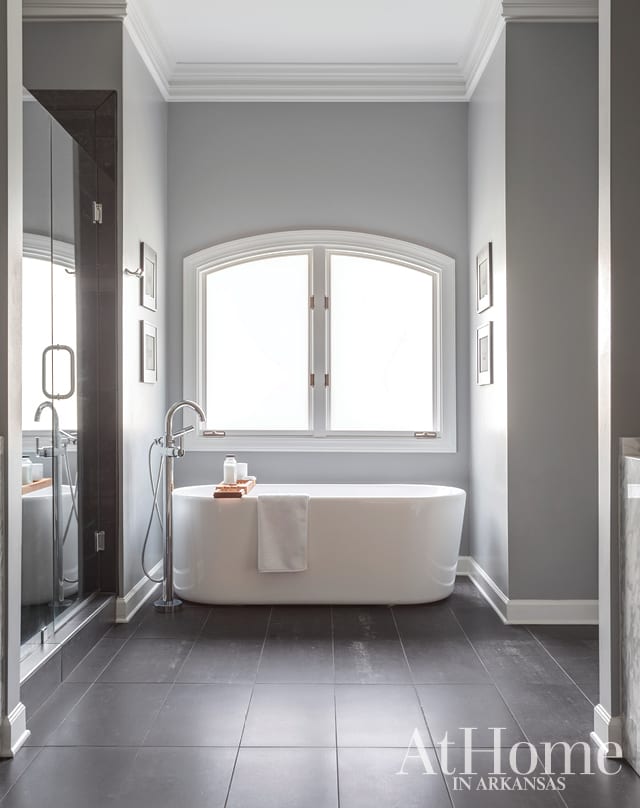 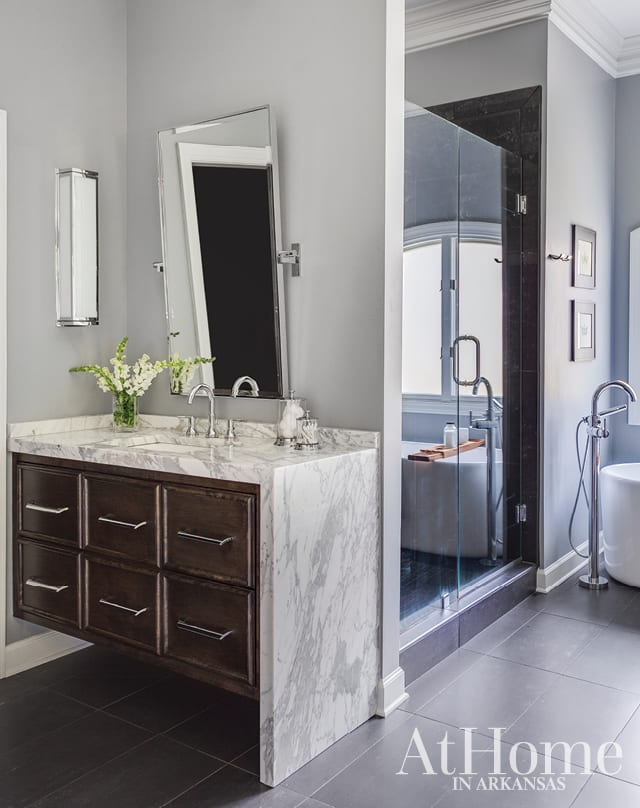 The master bathroom offered its own set of challenges; its size was generous but did not make the best use of space. “We had a whole conversation about, ‘This bathroom is enormous, but what are we going to do with it?’” Scott says. They realized they could turn the former vanity area into a closet for Charley, leaving the original closet entirely for Leslie. “It was so much wasted space,” Tammie says. “Without moving the door to the bathroom, we were able to produce his closet so they both have walk-ins, and still had enough room for two vanities, a walk-in shower, and a tub.”

The polished color palette from the kitchen is reflected throughout the house and into the master bath. Calacatta marble waterfall countertops encase floating vanities in the center of the space, while a large shower and freestanding tub are positioned near the room’s outer wall.

One of the most important elements of this home’s transformation was creating something that spoke to the Parnells’ modern sensibilities while staying consistent with the home’s traditional structure and exterior. “We wanted to respect the neighborhood and the exterior, but we were so glad Scott had seen our Chicago house and knew our tastes and what we liked,” Leslie says. “We were able to convert it into something that felt like theirs,” Tammie adds.

See photos of this home before renovations on our blog. 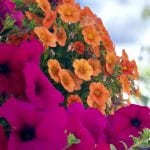 The 2020 Arkansas Flower & Garden Show opens February 28 at the Arkansas State Fairgrounds in Little Rock and showcases the latest in gardening, horticulture, and landscaping through the weekend. ...

END_OF_DOCUMENT_TOKEN_TO_BE_REPLACED 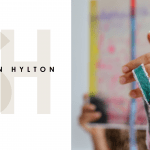 "Untitled" by Ziba Rajabi. Image courtesy Sutton Hylton Northwest Arkansas welcomes a new gallery to its ever-growing art landscape with the opening of Sutton Hylton in Bentonville. Owner and ...