Subscribe Today
Home / Articles / Up and Down the Delta

Discover Eastern Arkansas: Take in the sounds, tastes, and sights of the region to immerse yourself in this area’s rich heritage 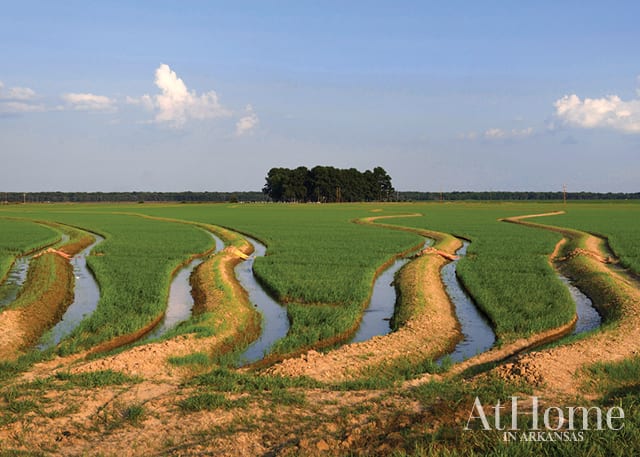 If you were to paint a portrait of the Delta, you could go a long way with just three hues on your palette. You would need a pure, cloudless blue for the sky, which goes on for miles and miles uninterrupted by anything taller than a silo. An earthy red would capture the sun bouncing off the side of a barn, rusted siding and abandoned farming equipment, and the ruddy tone of soil near the Mississippi. And then, of course, a vibrant green for the stalks of cotton, rice, soybeans, and other crops that grow in endless rows along state highways winding around the eastern edge of the state.

But that would be only one facet of the Delta—and an image will never do the place justice. What you really need to do is close your eyes and pick a spot on the map—Helena, Stuttgart, or Jonesboro maybe—as a starting point, and then hop in the car and hit the road. Explore. Between the many miles of farmland are mom-and-pop diners, local legends, and preserved pieces of history that help tell the complicated story of the Delta, and some of those places you’ll only find once you go looking.

What else, but take in the region’s best blues and country tunes? 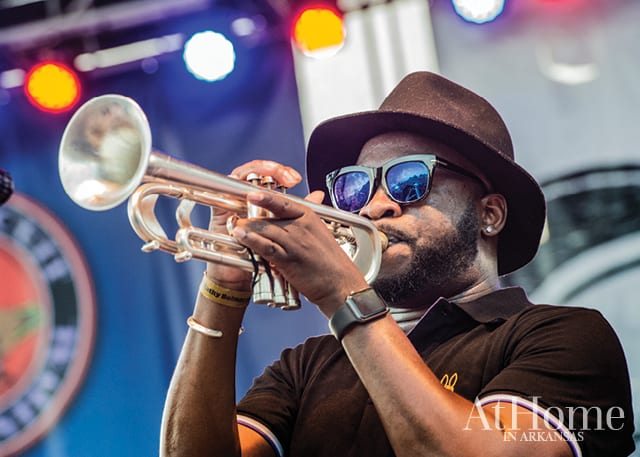 Above: Rodney Block performs at the 2017 King Biscuit Blues Festival.

Since 1941, Helena-based radio program King Biscuit Time has aired five days a week on AM 1360. While much has changed since then—wars fought, presidents elected, a man on the moon—the station acts as a time capsule, forever playing the blues in the early afternoon thanks to host “Sunshine” Sonny Payne, who has been at the helm since 1952. Eventually, organizers decided the radio show, which had hosted the likes of blues greats Muddy Waters, Pinetop Perkins, and Ike Turner, needed a festival of its own—hence the creation of the King Biscuit Blues Festival. Now in its 33rd year, the weekend-long festival features local and global acts on five stages across historic downtown Helena as well as street performers, food vendors, and artisans posted up and down the street. This year’s headliners are Bobby Rush, Dave Mason and Steve Cropper, and Blackberry Smoke. kingbiscuitfestival.com

While the Johnny Cash Heritage Festival is very much a music fest (with a name like Cash’s attached, what else would you expect?), its history and mission are not quite so straightforward. The festival was founded in 2011 as the one-day Johnny Cash Music Festival in Jonesboro as a means for the Cash family to raise funds to acquire and restore their father’s boyhood home. After successfully doing so in 2014 (read on for details on visiting the home!), organizers took a break to transition the festival from Jonesboro to Dyess, expand it into a weekend festival, and bring in a focus on the New Deal—the 1930s government program meant to help communities like Dyess bounce back after the Great Depression—and the effects it had on the region. Money raised will be used to recreate the outbuildings at the former Cash residence. This year’s lineup includes Jamey Johnson, Alison Krauss, John Carter Cash (the only son of Johnny Cash and June Carter Cash), and Ana Cristina Cash, singer-songwriter and wife of John Carter Cash. johnnycashheritagefestival.com

Dwight Yoakam is not your average country artist. In fact, he’s hard to pin down in that genre—he’s been described as hillbilly and honky-tonk, but also as skirting the boundaries of rock ’n’ roll and even punk. He’s been making music since the 1980s and his fan base has continued to grow steadily since then, citing an authentic sound akin to that of Merle Haggard (whom Yoakam called a friend) and Johnny Cash (who allegedly named Yoakam as his favorite country singer). Catch him at 8 p.m. at First National Bank Arena in Jonesboro. (Editor’s note: At time of publication, no opening act had been named.) astateconvo.com/events 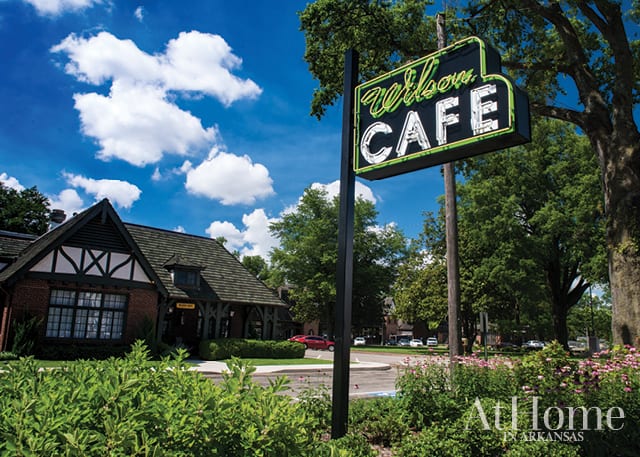 A trip to Wilson is not complete without a meal at the eponymous Wilson Cafe. For lunch, we recommend the Chubby Vegetarian’s Sweet Potato & Chipotle Burger (what a name!) with a serving of their mouth-watering Doughnut Bread Pudding. eatatwilson.com

While the exact history of tamales’ popularity in the Delta is varied and mythic, there’s no denying their position alongside pimento cheese and fried green tomatoes as a staple of the South. Pop into this storied hole-in-the-wall to try a couple of tamales paired with Rhoda’s equally famous sweet potato pies. (870) 265-3108

While 420 & Turnrow’s mission is to offer “coffee and community”—which it does through book signings, children’s events, and local get-togethers—it also offers a menu of salads, sandwiches, tacos, and nachos with ingredients sourced from local farms, meaning that it in turn supports the community it serves. facebook.com/420turnrow

This Jonesboro favorite doesn’t serve just any ol’ pub grub—there’s a level of creativity in the menu’s fried, cheesy, and delicious creations. Take for example the Gas Station Corn Nuggets (served with fries and ranch) or the Sloppy Joe Sweet Potato Fries (topped with both bacon and bacon slaw). jtownsgrill.com

Sky-high windows (meaning lots of natural sunlight) along with exposed brick and ductwork give this coffee shop/restaurant/bar a cozy yet open atmosphere that makes you want to linger. The shop is located in the recently renovated Lewis Supply Building, a century-old warehouse in downtown Helena. baileemaes.com

This is the fourth location of Nashville darling Holly Williams’s “general store for the modern-day tastemaker” (and the first in Arkansas). The shop’s specially curated collection includes home and kitchen wares, candles, apparel, and gifts—all inspired by life in the South. whitesmercantile.com

Looking for statement furniture and accessories to liven up a living space? Odds + Ends has it all, from conversation-starting lamps to sleek consoles and side tables. facebook.com/ShopOddsEnds

Ask any Helenian for shopping recommendations and they’re bound to mention Handworks. It’s a go-to destination for locals’ wedding registries, yes, but it also offers a wealth of art and goods that make the perfect gift for any occasion (even if it’s a gift to yourself). handworkshelena.com

Named for owner Jamie Darling, Darling’s carries on-trend clothing and accessories from some of today’s most popular brands, including Free People, Kendra Scott, and Arkansas’s own G. Spinelli jewelry. Don’t live in this area? Shop their Instagram feed and have packages delivered to your door. darlingsfinethings.com

If you’re looking to learn more about the Delta, this is perhaps the best starting point. Permanent exhibits detail the region’s complex history, from Native American settlements to plantation life, the Civil War, economic growth and hardship, and an enduring musical legacy. deltaculturalcenter.com 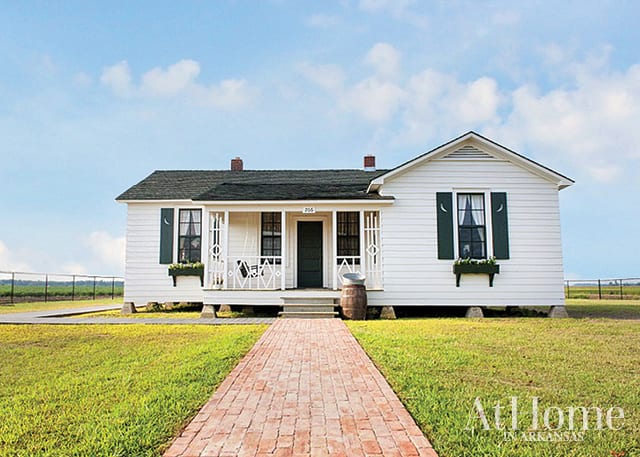 The Man in Black’s childhood home is only one part of the Historic Dyess Colony, an agricultural community established in 1934. Tours of the attraction (offered Monday through Saturday) begin at the Dyess Colony Museum and end with a shuttle to Johnny Cash’s restored home. dyesscash.astate.edu

This museum, which is located on the campus of Arkansas State University and offers free admission, presents rotating exhibits of contemporary art across all forms of media and plays host to the annual Delta National Small Prints Exhibition. From October 4 to November 7, see the temporary exhibit Eclectic, which features paintings and works on paper among neon-light installations, videos, and other non-traditional forms. bradburyartmuseum.org

The Rohwer Relocation Center was the site where more than 8,000 Japanese Americans were interned from 1942–1945. Visit the Museum for context about this mass relocation and stories of the families interned here before visiting the memorial cemetery at the camp, one of the only physical structures still standing on the site. rohwer.astate.edu 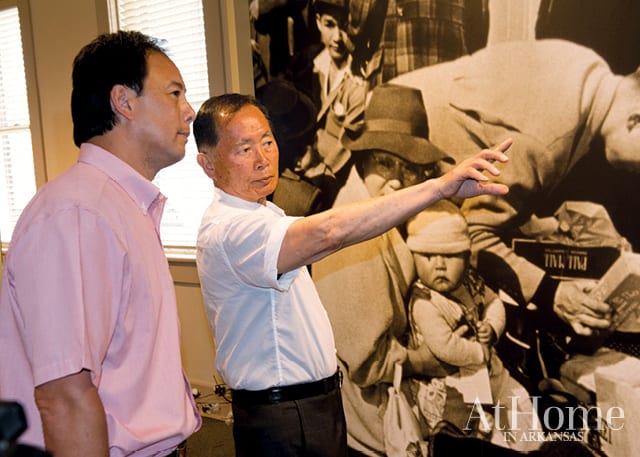 Above: Actor George Takei (right, best known as Sulu from Star Trek) visits the museum in McGehee for its dedication in 2013. Takei and his family were interned at Rohwer in 1942.

Although it was constructed in 1904, the Edwardian Inn stands as an example of the grand architecture of the antebellum South found in Helena (visit the nearby Pillow-Thompson House for a peek at another turn-of-the-century architectural wonder). The Inn features nine suites and a standout daily breakfast. edwardianinn.com

If an autumn camping trip is your speed, Craighead Forest Park offers all the amenities needed for tents and RVs plus access to biking and running trails, fishing at Craighead Forest Lake, disc golf courses, and playgrounds for the little ones. facebook.com/CraigheadForestPark