As Brandy and Richard Harp settle in to the sixth home they’ve built together for their family, they reflect on how their style and needs have evolved 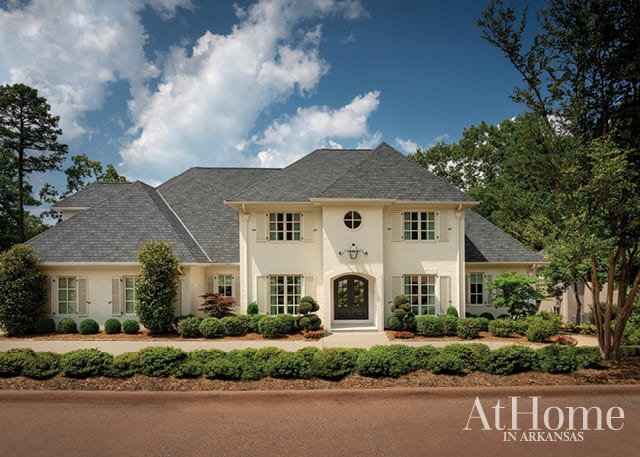 As a realtor and a builder, respectively, Brandy and Richard Harp are constantly surrounded by home design ideas, trends, and innovations. So, it may come as no surprise the pair had plenty of inspiration—and even a rough floor plan—when the opportunity to purchase the last lot in a highly sought-after west Little Rock subdivision presented itself.

However, they both seemed to know this home would be different from their previous residences. With two active children, Isabella, 12, and Nicholas, 10, as well as fast-paced careers, the two focused on not only style but also convenience and comfort. “We tried to design a house that was very low maintenance,” Brandy says. “We asked ourselves, ‘How can we ensure we are living efficiently and effectively but make sure it feels homey?’ We wanted it to feel authentic and be a reflection of our personalities,” she adds.

While inspiration and resources abounded for the Harps, they knew they wanted to work with a professional designer to help bring their vision to life. “This was our second time to work with Tobi [Fairley] on one of our homes. We’ve gotten to know her really well because I also did the renovation of her house,” Richard says. “In the past, I would say Brandy’s style was more traditional,” Tobi says of the goals for the new-construction project. “As we have worked together, it has evolved. I think she and Richard both wanted something clean, simple, and really comfortable.” 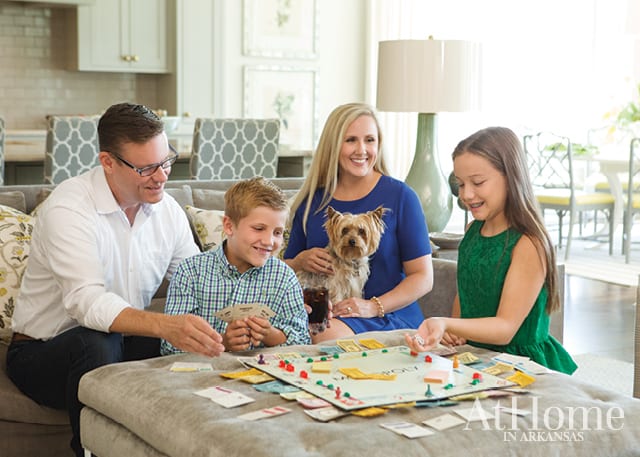 Above: The open floor plan allows conversation to flow from the kitchen to the living room with ease and means the family can go straight from dinner to game night (Monopoly is a favorite pastime!) with little transition.

These desires led to a timeless design in terms of both architecture and interior furnishings. “You can’t look at this house and tell when it was built. We kind of patterned it after homes from the 1930s and ’40s. The architecture in here is what builders would’ve been capable of in the ’30s and ’40s; For example, the trim is not overstated, the cabinets are fairly simple. Nothing is period specific but everything is clean,” Richard says.

Being in the home industry, it’s inevitable the couple’s residence serves as a model home for many of their clients. “We were able to build this house because we have a great group of vendors who we work with on a daily basis, and we are incredibly grateful for them,” Richard says. “When clients come here now, almost invariably, they will find some aspect of this house they want to replicate in their own: from paint color on the exterior to the floors to the layout of the master bath, or something in the kitchen or on the back patio. Things that are generally nondescript but that they pull out and want to use,” he adds.

As for their own plans to reinvent the place they call home once more, Brandy says, “Before kids we were pretty mobile. Now we have a cocktail napkin agreement that we’re going to stay here until our kids graduate—but we’ll see.” 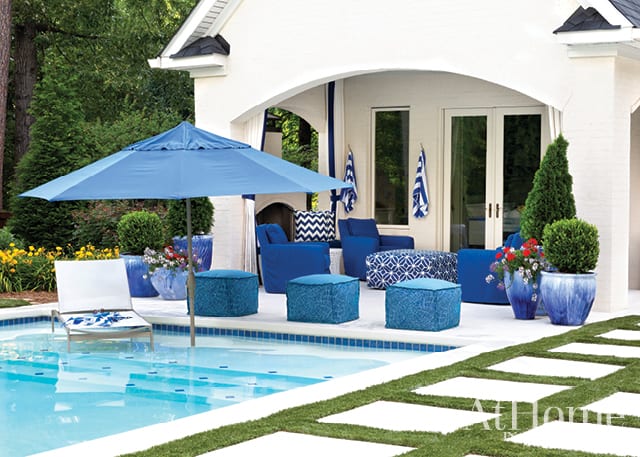 Best Laid Plans
Richard admits to drawing the plan for the home multiple times. “When we build one house, all those unused ideas that we really like but don’t have a place for in that house, we put toward the next house,” Richard says. “We were only in our previous home for a couple months when we drew the plan for this house and pocketed it—and it stayed pocketed for many years.” When the time was right, the draft for this home was reopened and finished to match the family’s current needs and tastes. Originally, the design included stonework on the front façade; however, stone was traded for painted brick, and a pool and pool house were installed at the back of the home’s multi-level lot.

Read more about the pool and pool house featured in our June 2019 issue: Personal Oasis 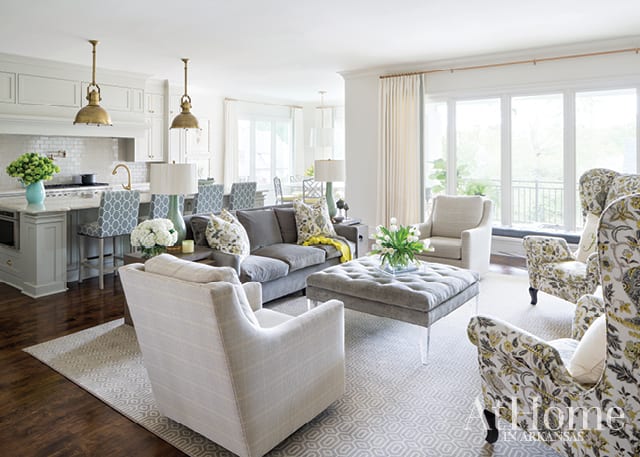 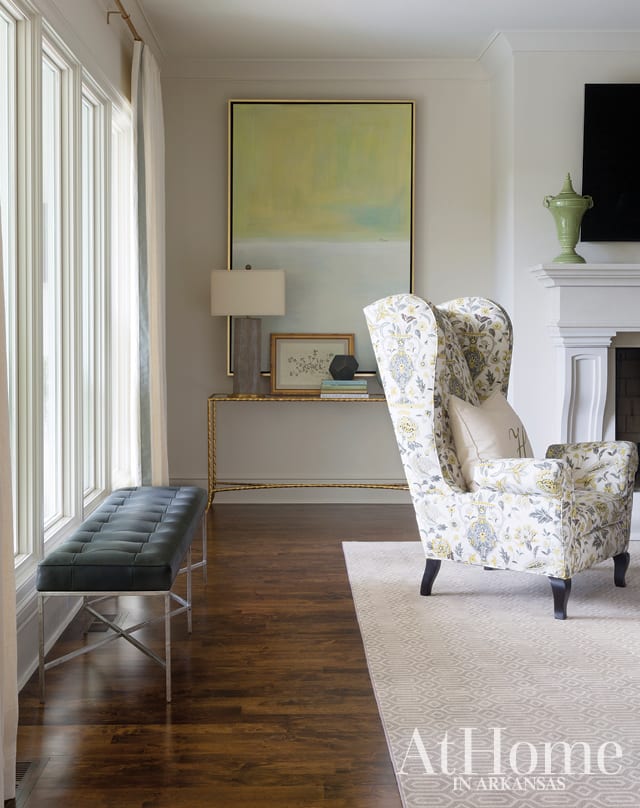 Made for Everyday Use
Equally chic and comfortable, the living room is the home’s number one hangout—whether for just the family of four or when they are entertaining a crowd. Brandy notes the room also includes personal touches, such as a pair of paintings on either side of the mantel by artist Ashley Jones Schwander, a friend of the Harps. “We wanted a piece of her art in our home and commissioned her to create these two,” Brandy says. 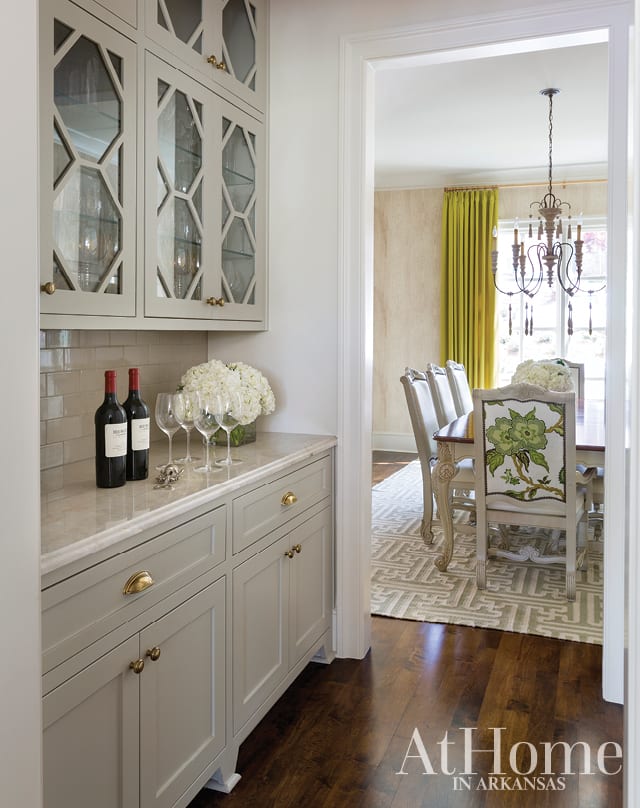 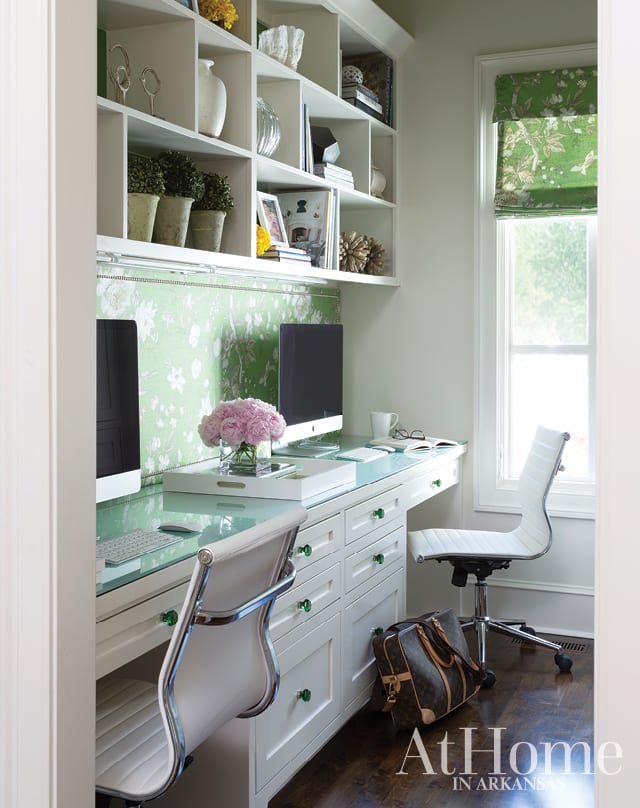 Green with Beauty
A small home office, located just off the kitchen, serves as a homework space for the Harp children. “We wanted this space to have energy and feel light-hearted,” Tobi says. A geometric-print wallpaper covers the ceiling while Thibaut’s “Nemour” floral print, seen on the Roman shade and tack board, softens the room. Doors conceal files and supplies, while vintage-look, green glass knobs and modern chairs adhere to the home’s mix of old and new. 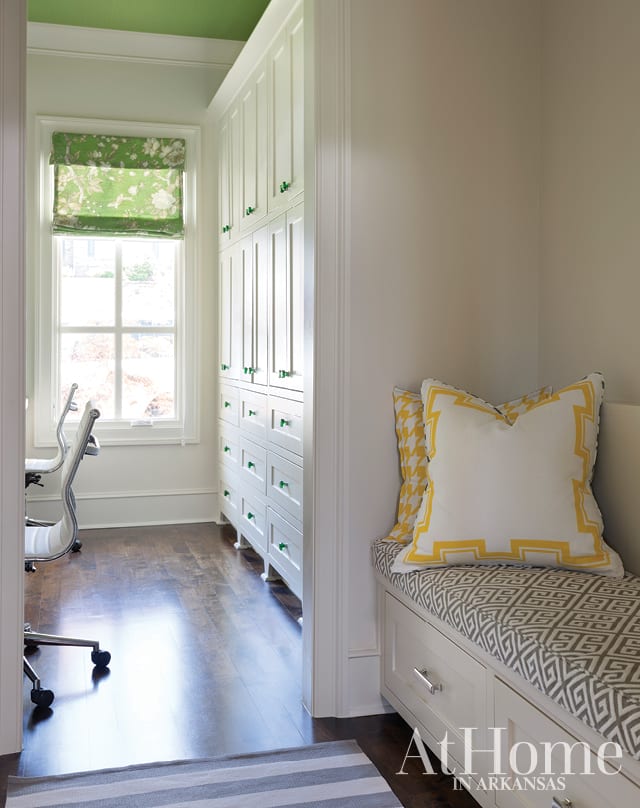 Above: A mudroom, the perfect drop zone for backpacks, connects the kitchen and homework station. 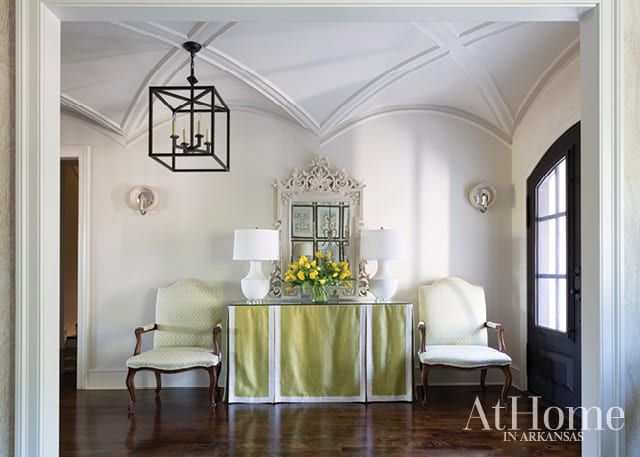 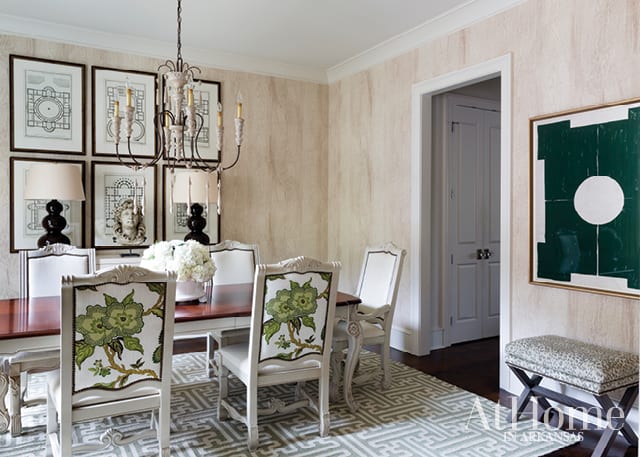 Cherished Pieces
“The Harps’ home is the perfect marriage of pieces they already had blended with new,” Tobi says. Case in point, the dining room where a table and chairs Brandy and Richard bought shortly after they were married was updated with a coat of paint and new fabric. “It’s nothing special … but it represents a piece of our family. It’s where our holidays are spent. Lots of memories that we’ve built over the years have been made around that table,” Brandy says. “Richard lost both of his grandparents—who played a pivotal role in his life—recently, and we remember his grandfather saying grace over that table,” she adds. Contemporary yet warm faux bois-style wallpaper envelops the room while a geometric print rug and a piece of art from Tobi’s collection with Soicher Marin complement the design.

“We used a lot of traditional shapes and motifs in this house, because a really modern or transitional style wouldn’t fit them. But we made it monochromatic to keep it light and relaxing.”
—Tobi Fairley, designer 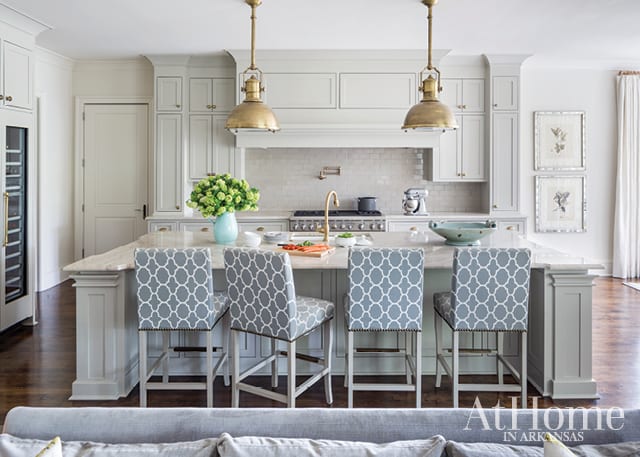 All Together Now
“We entertain a fair amount, so part of our wish list was a working area that we can still live in,” Richard says of the kitchen that opens to both the living room and breakfast nook. “People always want to congregate in the kitchen but this invites the kitchen into so many other public areas of the space, so you can have a fair number of people in this house and not run into each other,” he adds. For the design, Tobi paired quartzite countertops and a glazed ceramic tile backsplash with brass finishes for a layer of polish that blends with slightly more contemporary elements such as the barstools, which feature a geometric print—a design element that is repeated throughout much of the home. “Again, it’s that mix of traditional and new,” Tobi says. “The brass gives it a warm feel, but the gray feels updated and current.” 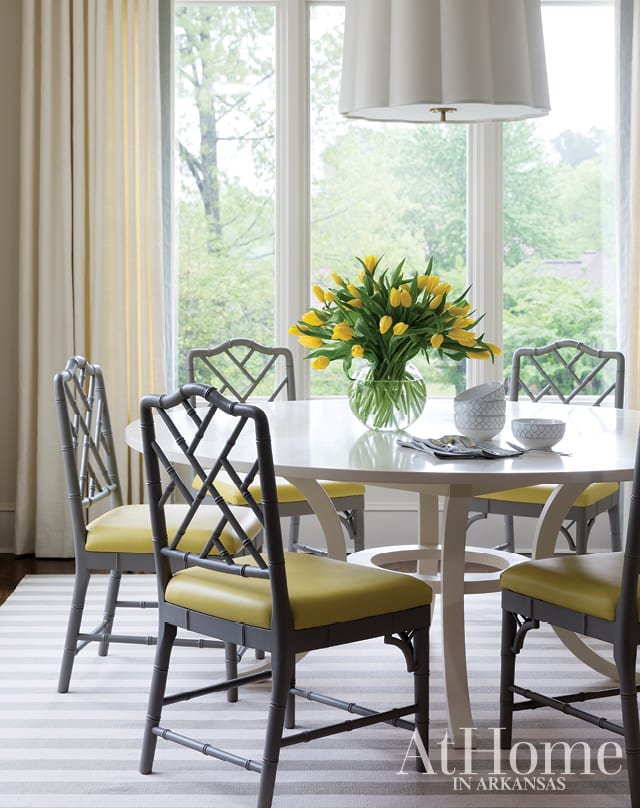 Dining In
Richard worked with local furniture maker Tommy Farrell on the design for the family’s breakfast table. Bamboo chairs are covered in a vinyl fabric for easy cleaning. Tobi notes the addition of the feminine shade and drapery panels soften the kitchen and dining table’s hard surfaces. 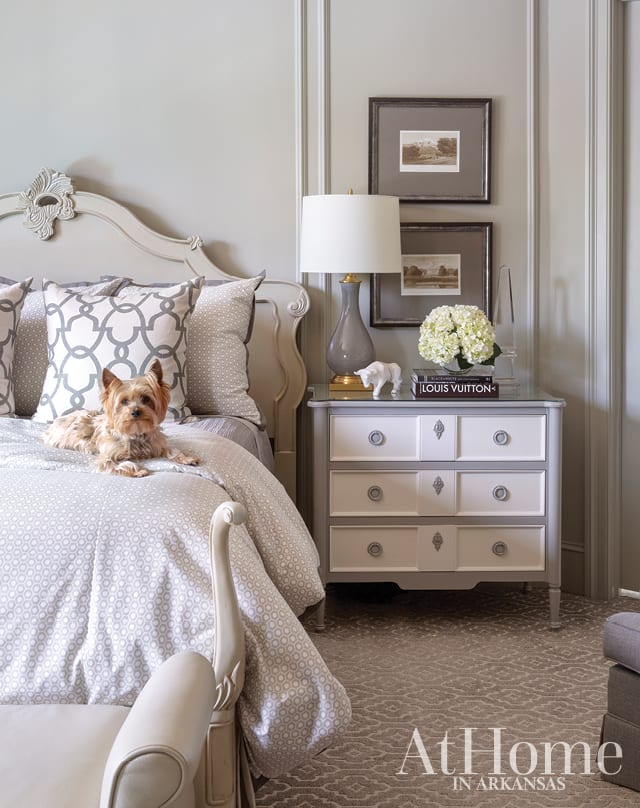 Calming Trend
The bed and bedside tables were pieces the Harps already owned and Tobi had painted in the cream, white, and gray palette to work in the new master bedroom. The designer notes the mix of scale and motif (as seen in the patterns on the linens and carpet) is a nod back to the couple’s traditional roots, while the choice of a geometric-print carpet is another example of the home’s modern influences. 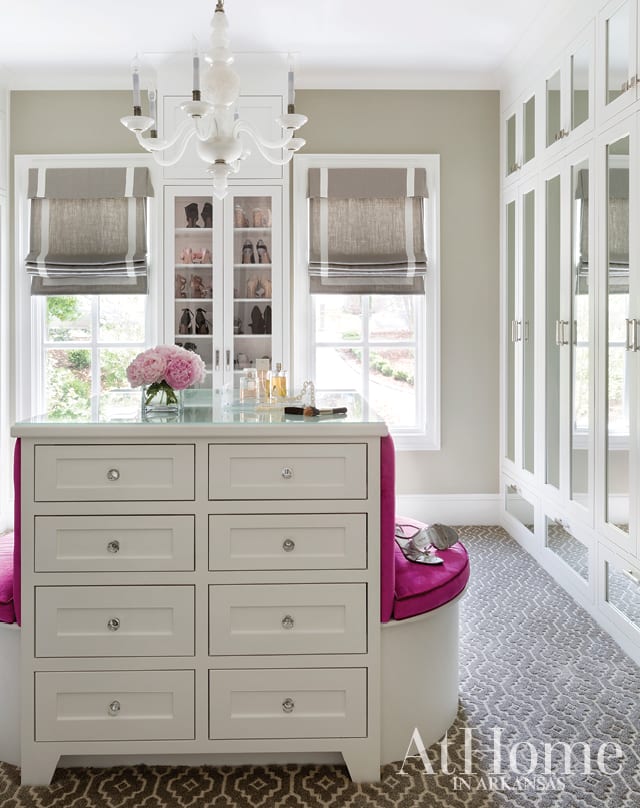 Her Domain
Richard designed the master closet as a special gift for Brandy, and it has become a concept he repeats in many of his new builds for clients. Tobi helped to finish out the space with the same neutral hues seen in the master suite along with a pop of feminine fuchsia seen on the two side benches. “Everything is concealed behind doors, so it never feels cluttered or messy—it’s all streamlined and organized,” Tobi says. Roman shades allow natural light into the room—a helpful addition for selecting and matching clothing—but pull down easily to close for privacy. 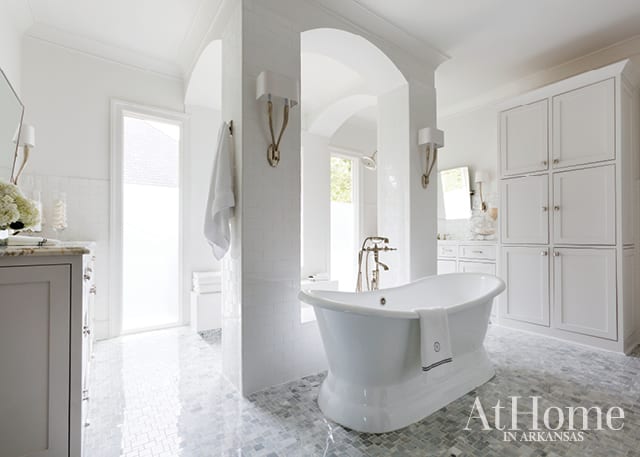 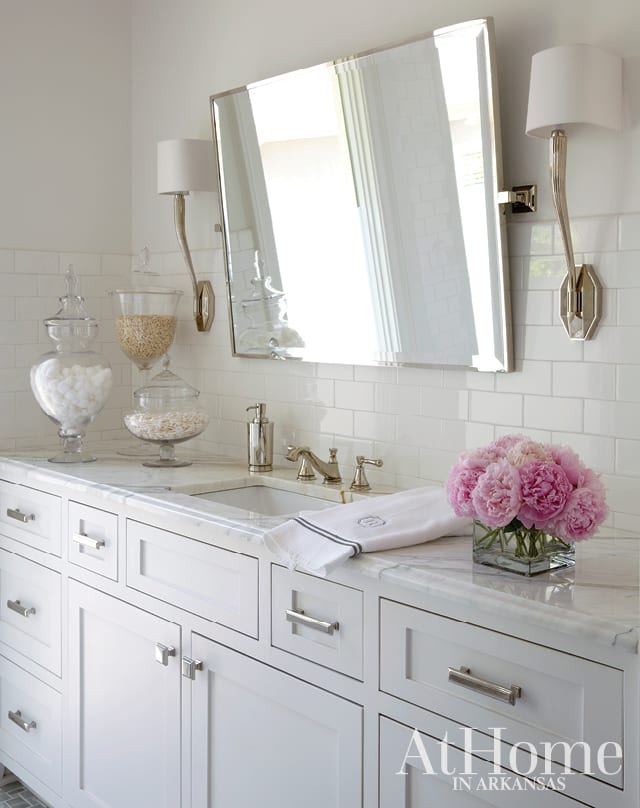 Spacious Spa
“Richard loved playing with the design of the columns,” Tobi says. “Their last bath had columns but it was a different, very traditional look with capitals.” The columns here create a grand entrance to the open shower, which harks back to the couple’s desire for a low-maintenance home because it requires no glass cleaning. The entire space is wrapped in white subway tile. “It gives it the room the feel of a Manhattan apartment,” Tobi says of the application. “I never get tired of subway tile; it can instantly create a spa-like atmosphere and makes this bath feel very clean and fresh.”

Read more about the pool and pool house featured in our June 2019 issue: Personal Oasis