Designer Jonathan Parkey of J. Parkey blends patterns, styles, and collections to imbue a Jonesboro home with life and history 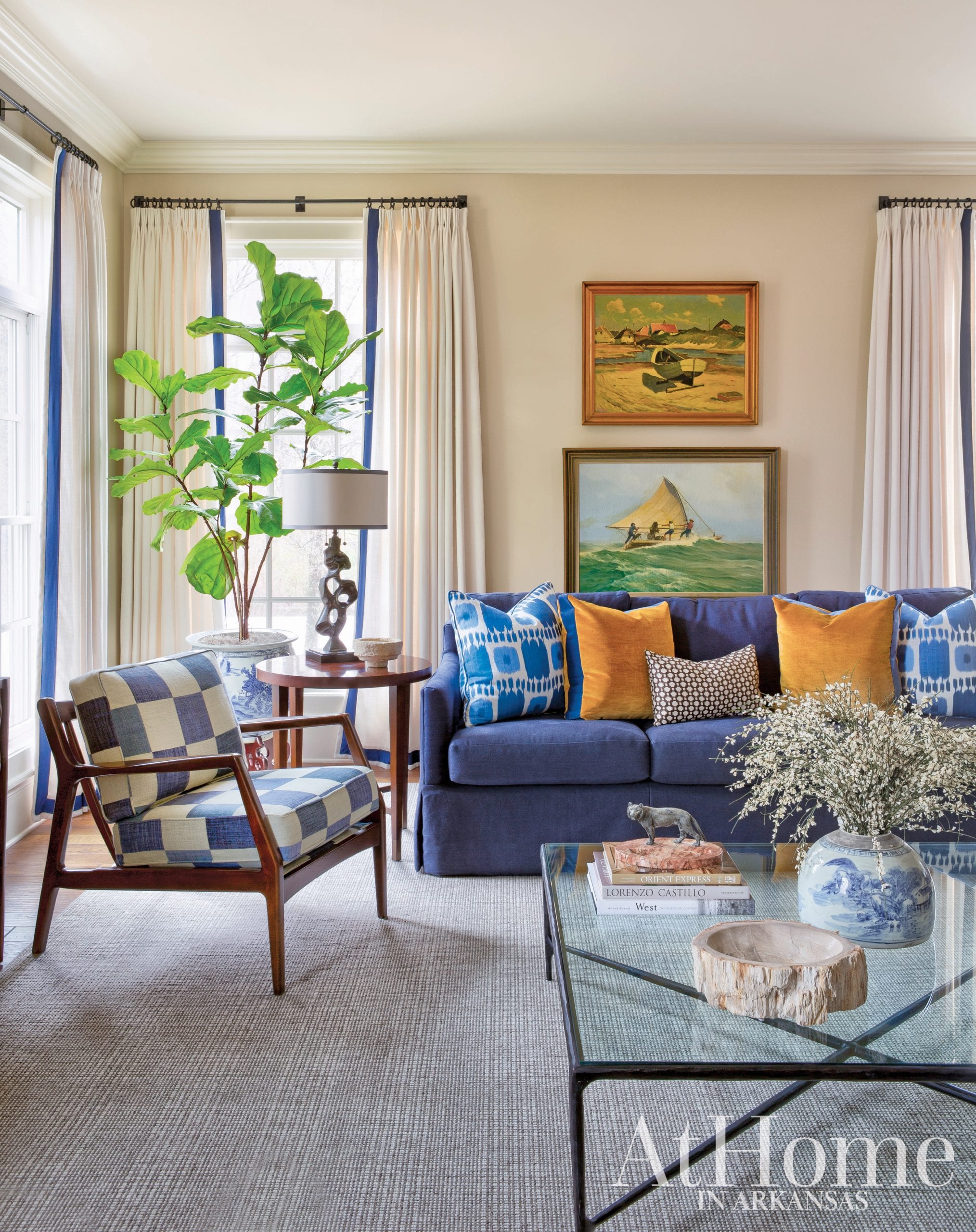 Like his path from Arkansas to New York and back, Jonathan Parkey’s design is anything but ordinary. A Jonesboro native, he moved to the Big Apple to pursue a career in theater after college in Michigan. Following a stint off Broadway, he found himself working in the fashion industry in luxury womenswear. “I opened up both retail spaces for the fashion startup I worked for, and that’s where I caught the bug of working in design professionally,” he says.

Four years ago, Jonathan moved back to Arkansas—“one of the best decisions I’ve ever made,” he says—where he works with design clients in both his hometown and Little Rock. When the owners of this home called him on board, Jonathan had a vision for the house that would help them feel like they’d lived there for years. “The previous homeowners built the house with so much care and purpose, so the bones were spectacular. This project was about taking the bones and stripping it down to fit the new homeowners’ style.”

The main challenge in achieving this came in working within the home’s open floor plan, where the kitchen, dining room, and two living spaces all adjoin one another. “It makes a big ‘L’ shape, which is great flow for a party and when all the family is over,” Jonathan says. “With no formal dining and living rooms, we wanted to make sure it all worked together while giving each space its own distinct personality.” Uniform draperies and accents in a palette of primary colors help tie the living spaces together, while eclectic accessories and boldly patterned pillows and upholstery add character to each room.

Jonathan was also mindful of incorporating some of the homeowners’ favorite antiques, rugs, and pieces of art, such as a limited edition Blue Dog print, into the design. “It was fun to pull out pieces that were hidden in their last home and really capture who they are right now in their life,” Jonathan says, noting the homeowners have several grandchildren, so the spaces also needed to work well for little ones. “I wanted it to feel lived in, like there’s history here even though it’s a fairly new house,” he says. “This has a look that could have been here a decade or two ago and will still be relevant in 30 years.” 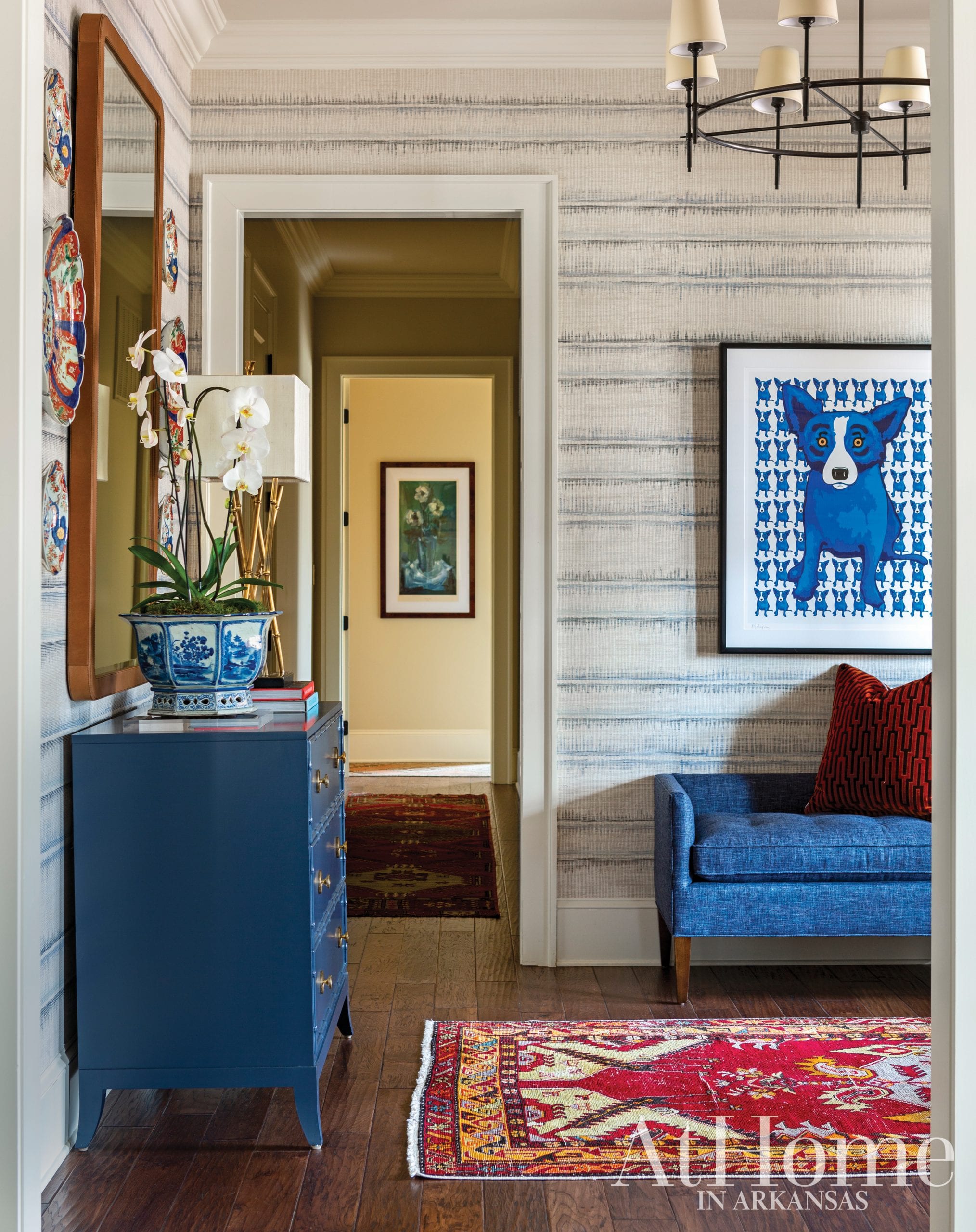 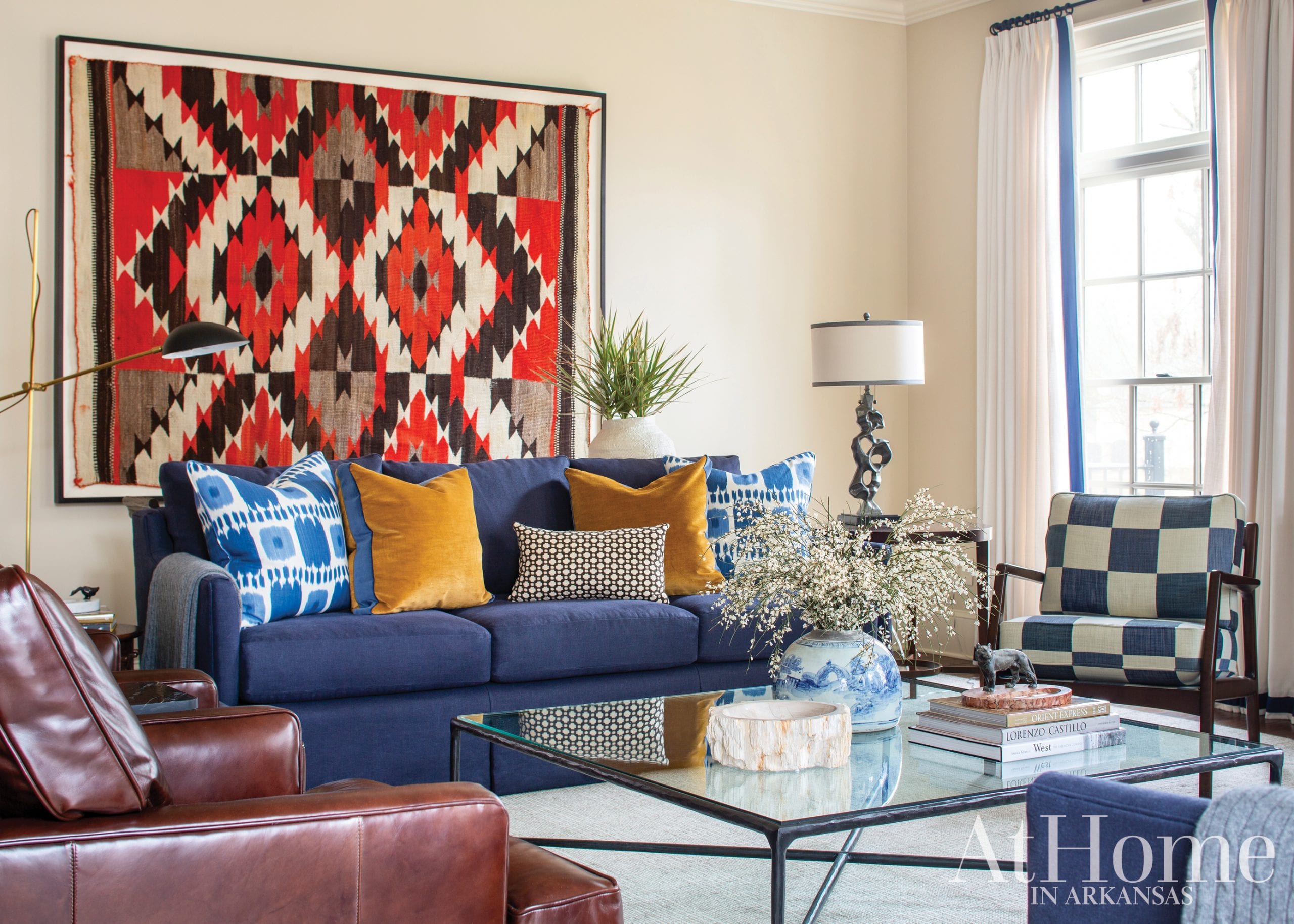 Dazzling Display
In the more casual of the living spaces, a pair of navy couches and a mix of leather and midcentury-inspired armchairs provide seating for a crowd. “Even though it’s a traditional home, I wanted to create some surprising moments within the design,” Jonathan says of the mix of styles. While pops of pattern and refined fabrics add interest, the real showstopper is an antique Navajo Eye Dazzler rug Jonathan found at an antique show and had framed by M2 Gallery in Little Rock. 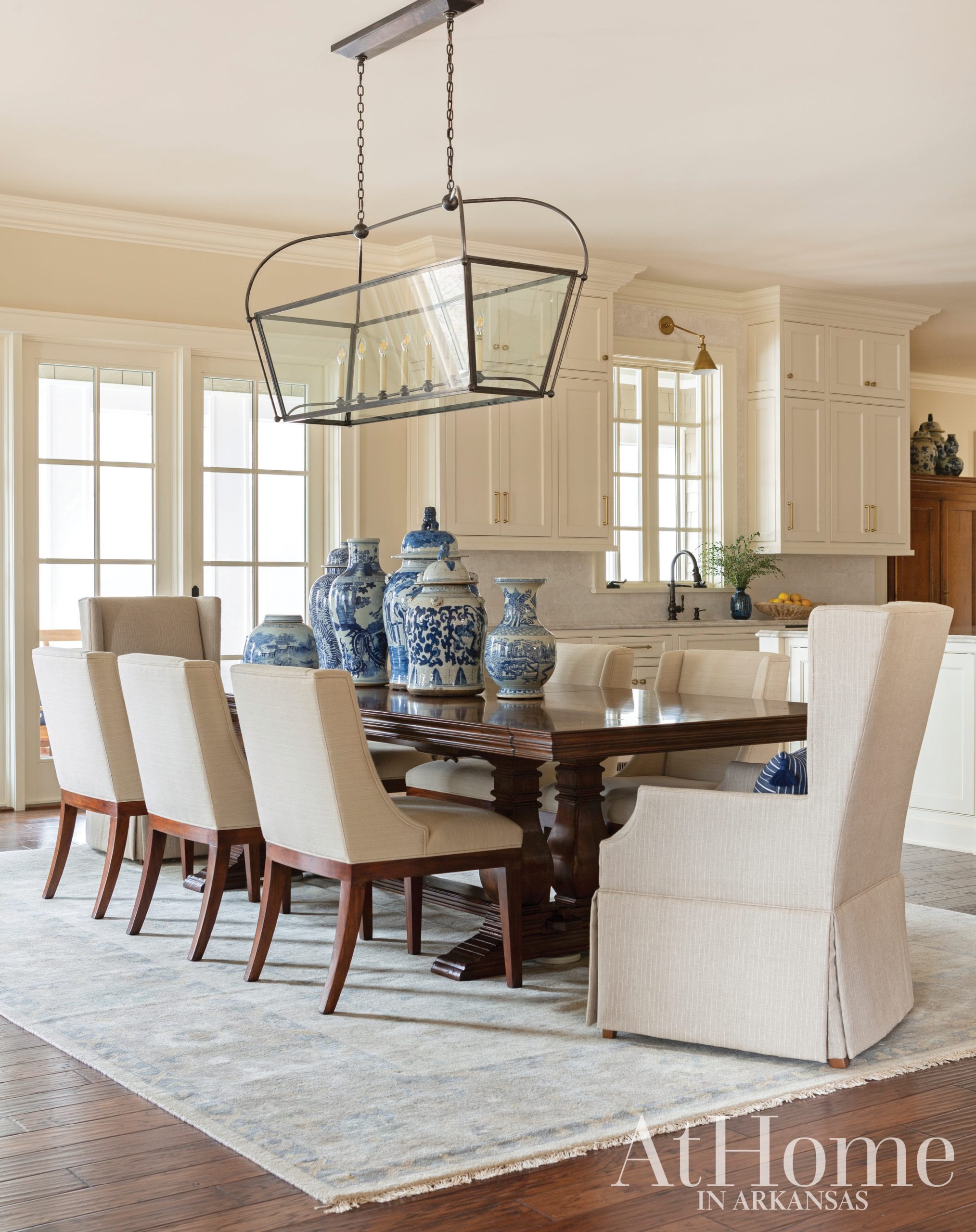 Dining Decisions
In the dining area, Jonathan made use of the table the homeowners brought from their previous house and added all of the leaves so it would make a statement. “I also wanted the biggest linear light I could find to help make this feel like its own space.” Upholstered seating encourages diners to linger, while a collection of ginger jars carries the home’s blue hue into the space. 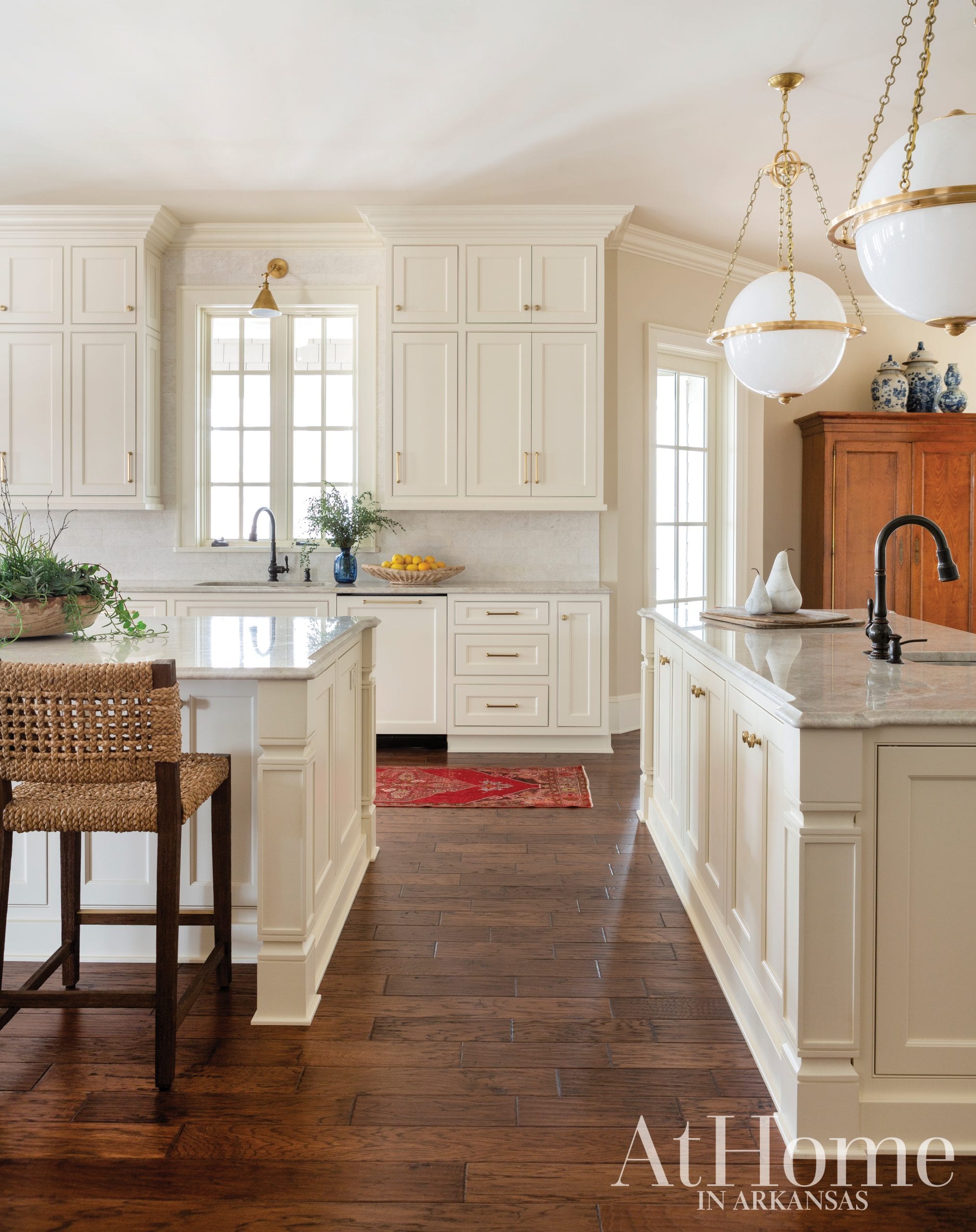 Kitchen Upgrade
Jonathan worked with Tommy Westbrook of Westbrook Premier Kitchen & Bath to reconfigure the layout of the kitchen as well as replace cabinetry and countertops. One of the most significant changes came in creating two separate islands and installing cabinetry that reaches the ceiling. “This was all about making the kitchen function for the family, especially when all the grandkids come over,” Jonathan says. The combination of black fixtures, brass accents, woven barstools, and ogee edging on the quartzite countertops achieve a style that’s both refined and comfortable.“The homeowner has always had a solid white kitchen, but she does love color and pattern,” Jonathan says, noting that all the red runners throughout the house came from her personal collection. 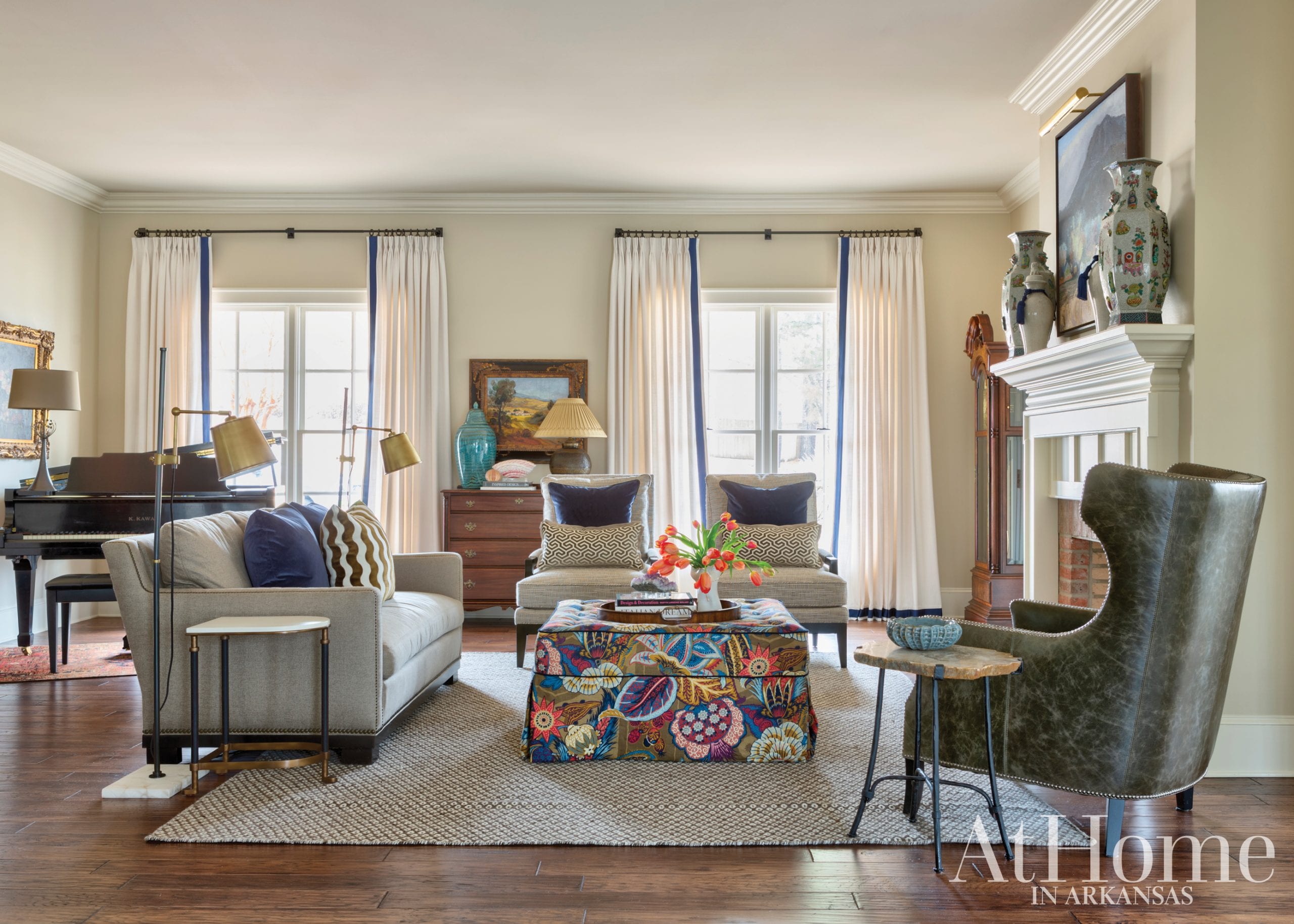 An oversized ottoman covered in Shumacher’s “Zanzibar” serves as both a coffee table and a focal point in one of the living rooms. 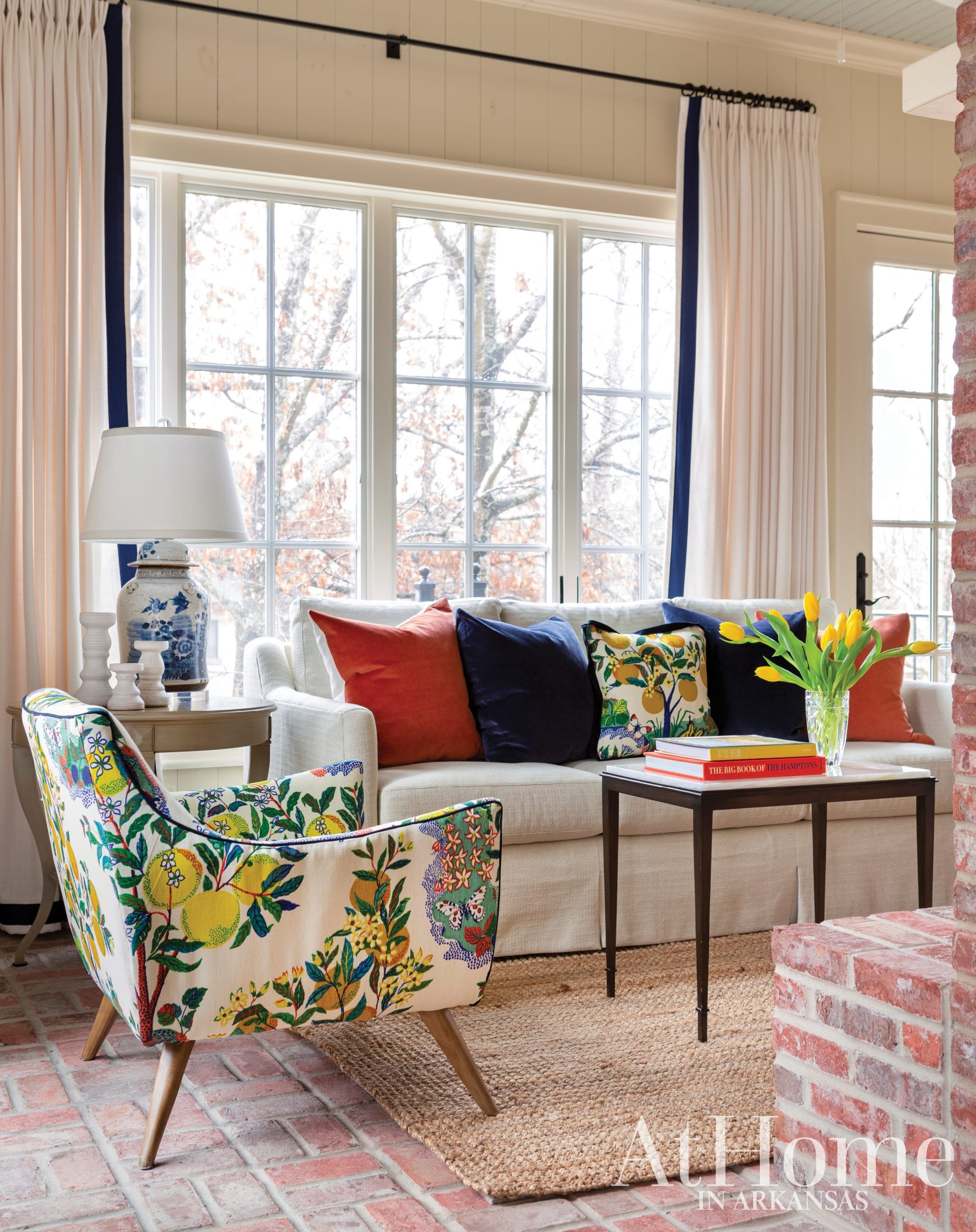 An airy sunroom is where the couple spends most of their time, often with their three dogs nearby. The pattern seen on the chair and pillow is Schumacher’s “Citrus Garden.” 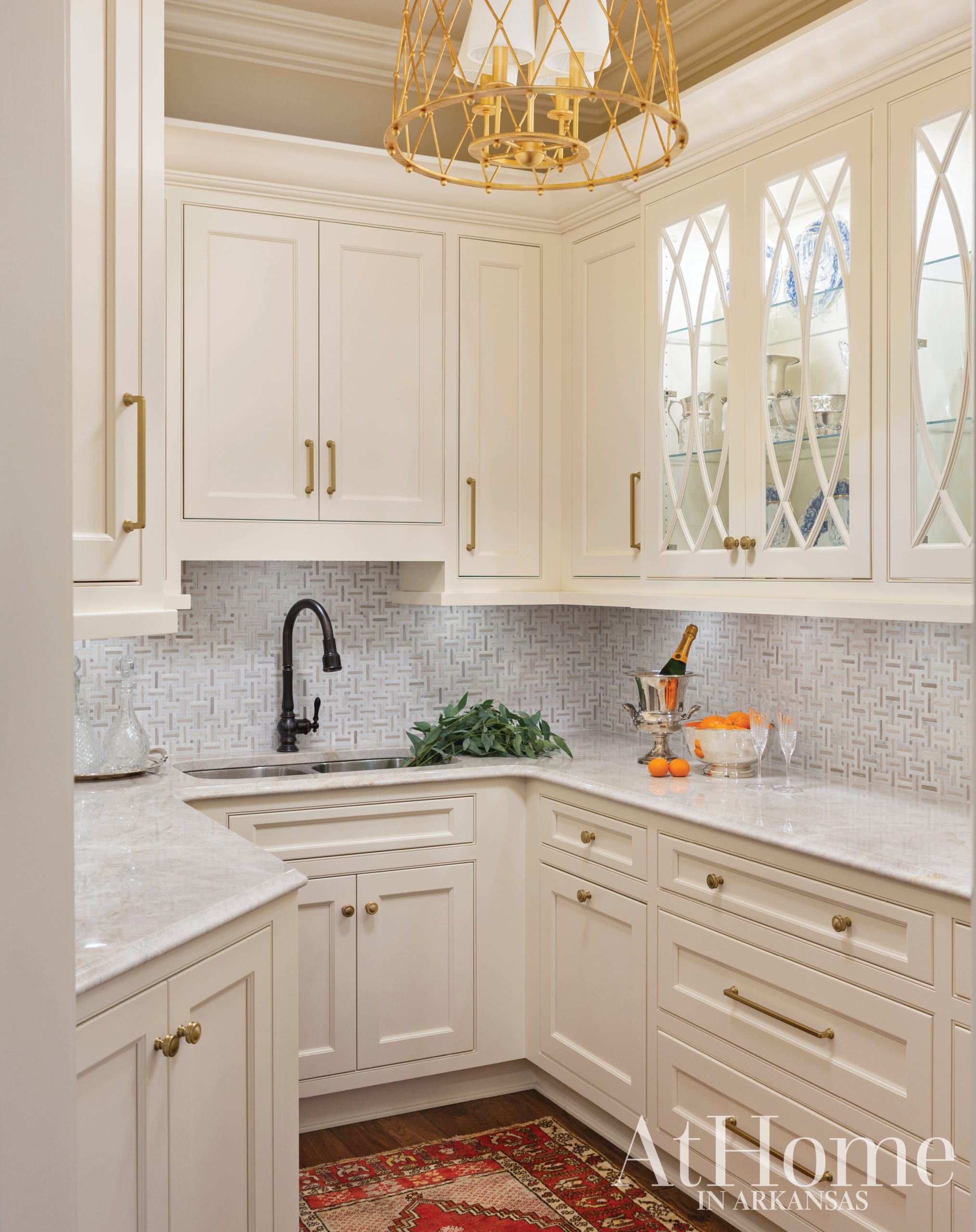 Small Spaces, Big Style
Off the kitchen, a butler’s pantry (above) received an upgrade as well. Open shelving and café curtains were replaced with custom cabinetry, and a few select glass-front cabinets create a stylish display for the homeowner’s china and crystal. A basketweave backsplash and transitional light fixture turn the polish up a notch. In the powder bath (below), design decisions were based on the homeowner’s “gut instinct” about things she loved—for example, the wallpaper. While they left the vanity untouched, Jonathan designed a custom mirror to hang over it. 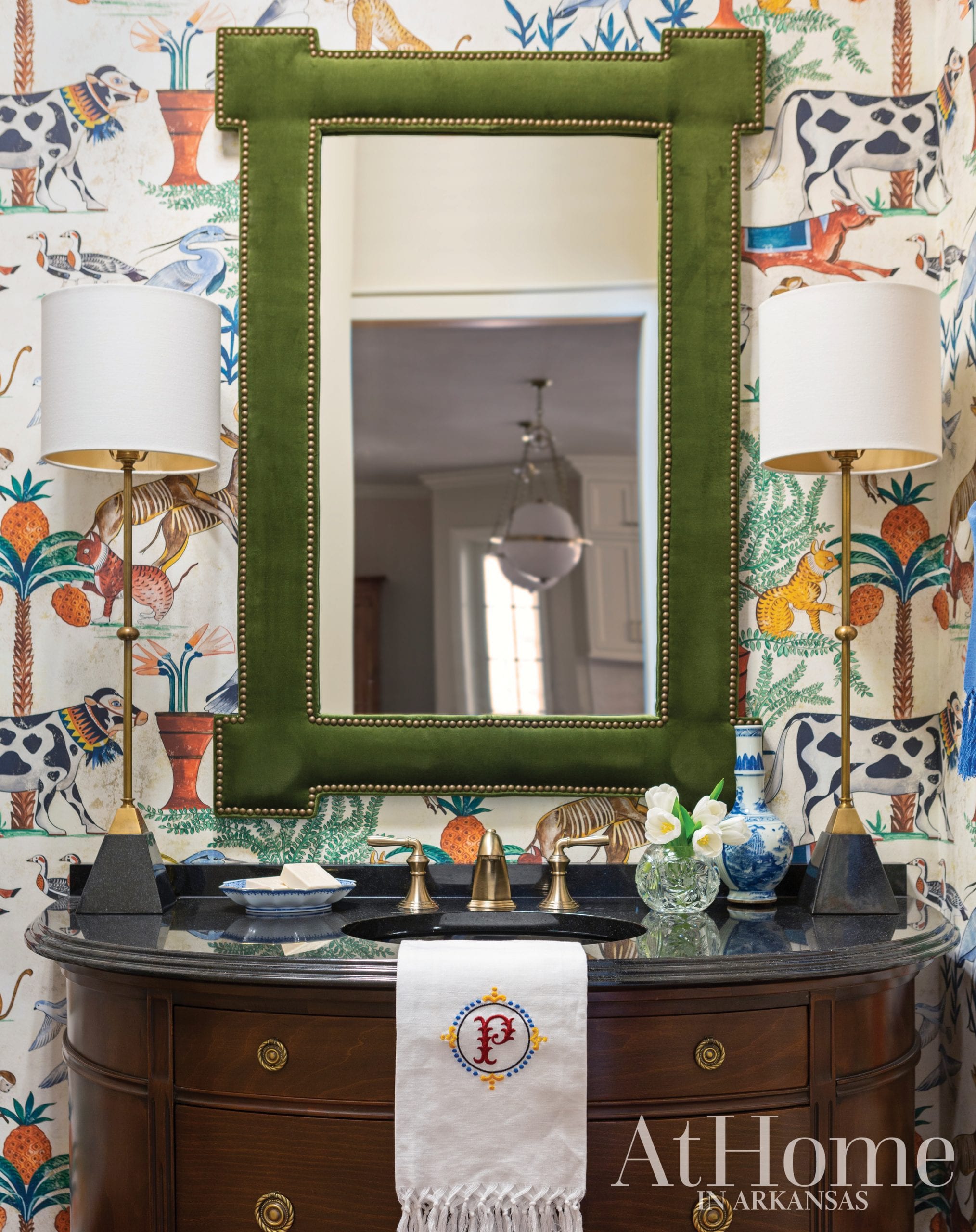 “Even though it’s a traditional home, I wanted to create some surprising moments within the design.”
—Jonathan Parkey, designer 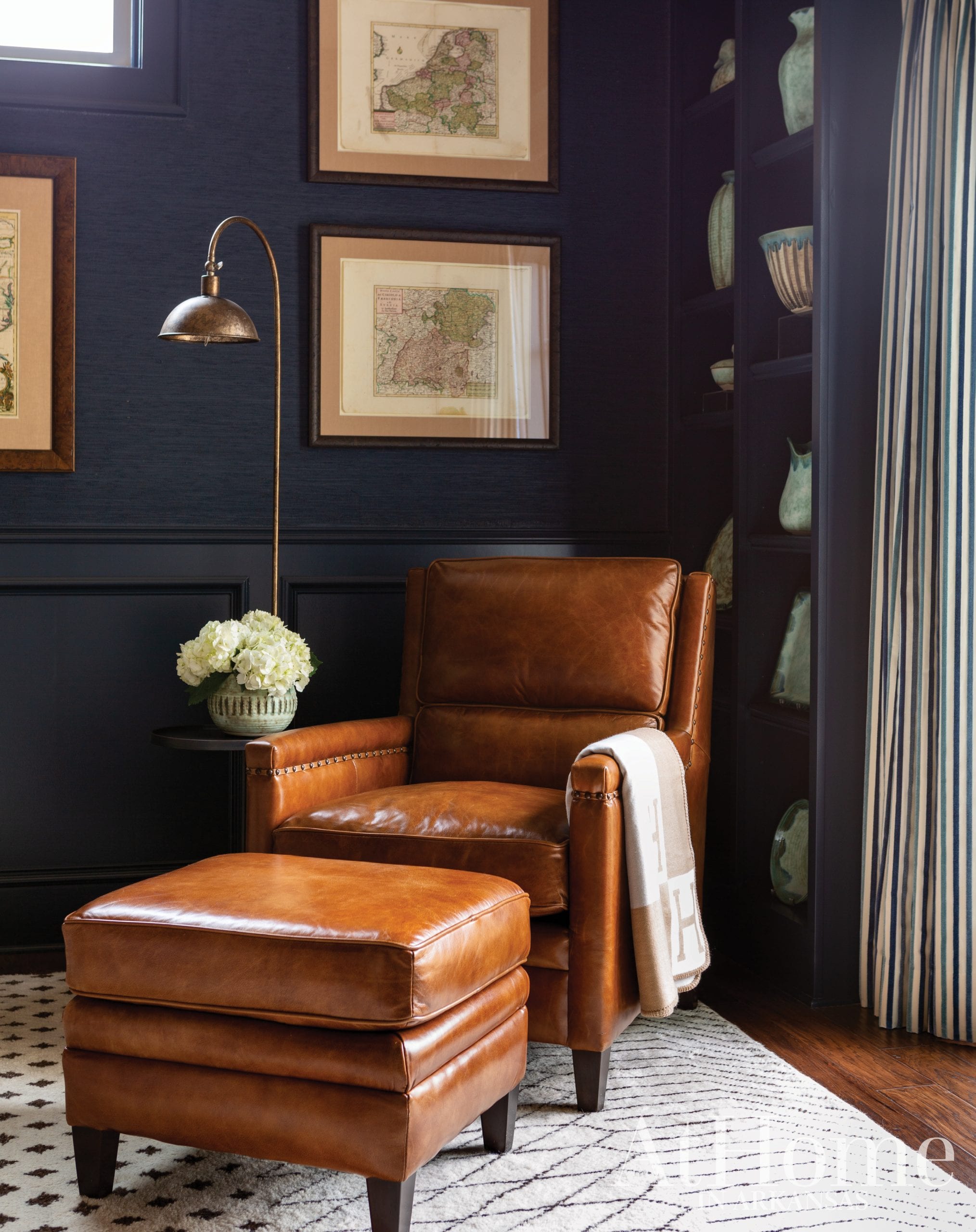 Cool & Collected
A library off the master suite plays host to a collection of 40-plus pieces of jade McCarty pottery as well as several of the couple’s antique maps, all of which depict locations meaningful to them. While the chair rail, millwork, and grasscloth wallcovering were existing, Jonathan had everything painted in Benjamin Moore’s “Hale Navy” to add a masculine air that carries throughout the home. 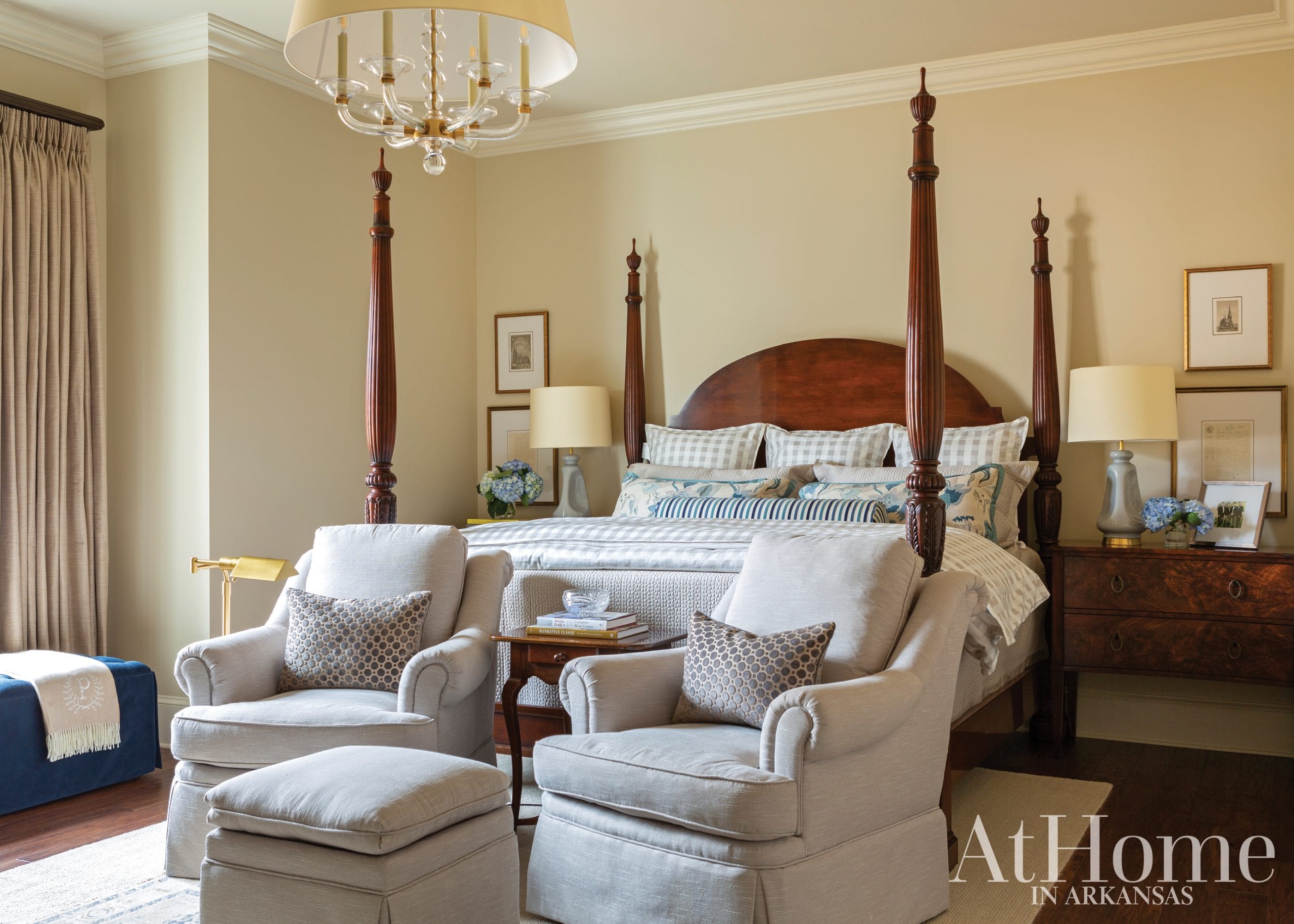 Softer Setting
The master bedroom takes on softer, more neutral tones of the palette used throughout the rest of the house. “I wanted to make this room feel as cozy as possible,” Jonathan says. He chose side tables, bedding, and custom pillows to complement the homeowners’ four-poster bed as well as the colors and fabrics used in the nearby library. 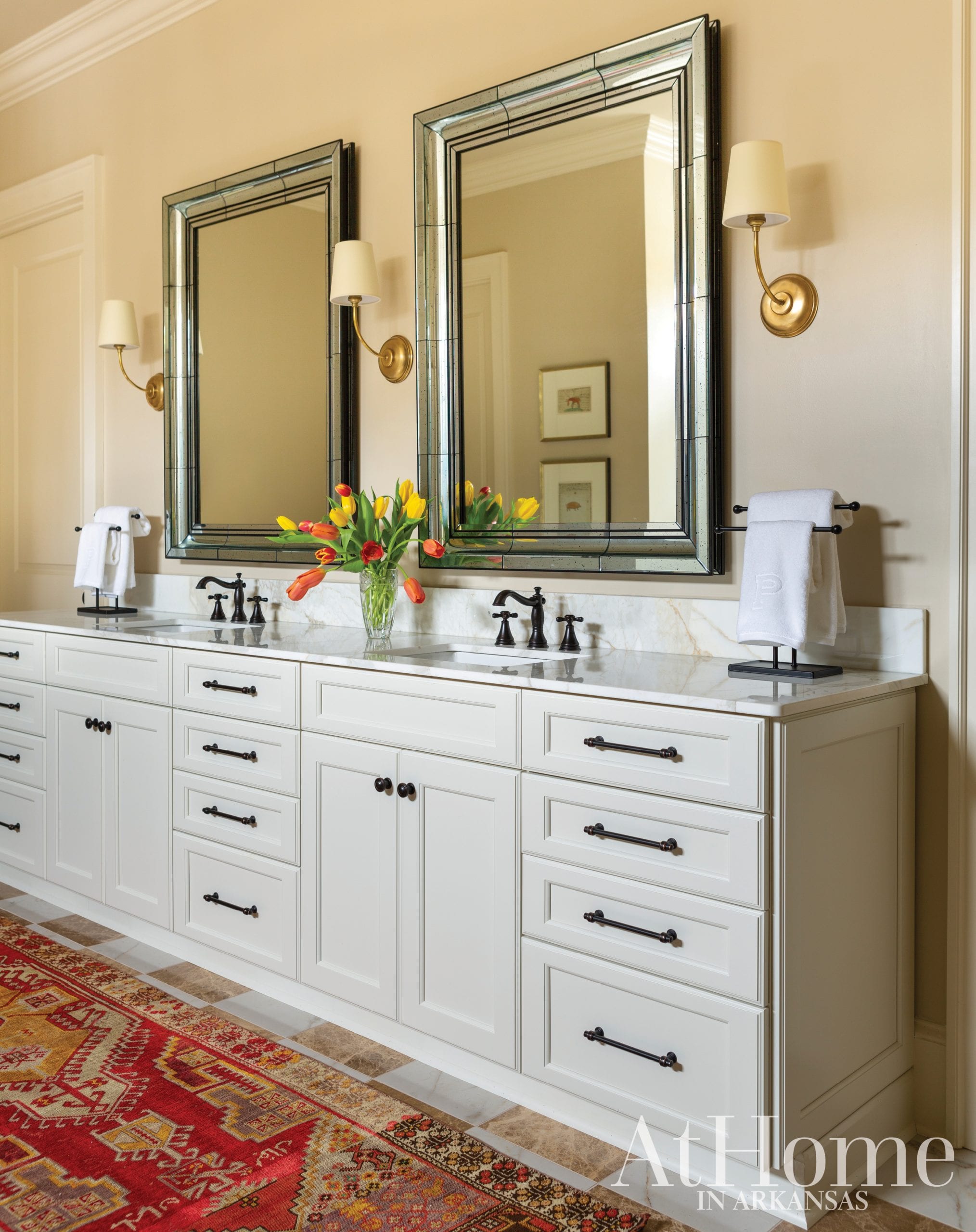 “The homeowner has always had a solid white kitchen, but she does love color and pattern,” Jonathan says, noting that all the red runners throughout the house came from her personal collection. 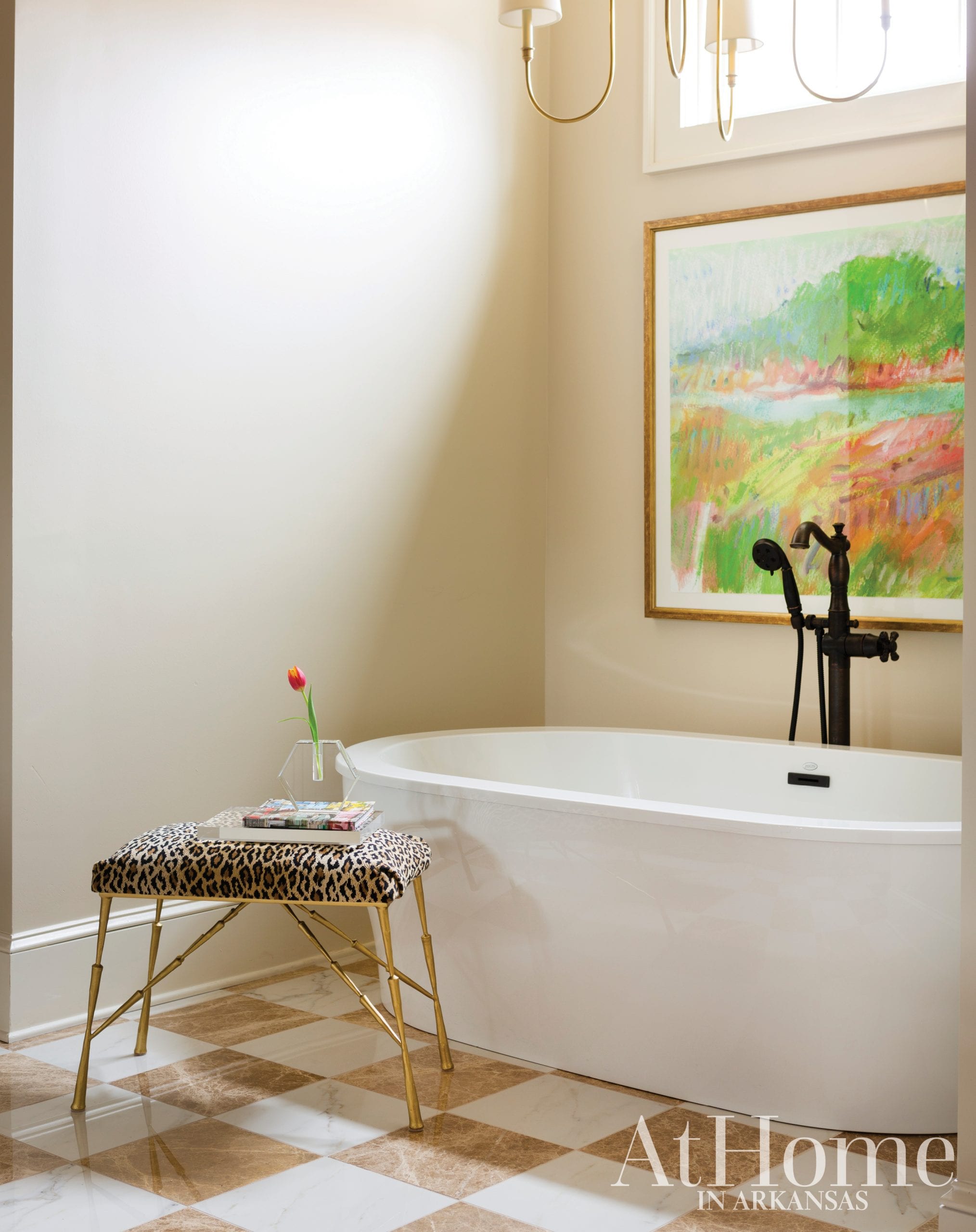 Neutral Design
The former iteration of the master bath was completely open with glass-block walls separating the built-in tub from the shower, and a single vanity situated between the doors to his-and-hers closets. To make this space more functional for two people, Jonathan had the closet doors moved out to accommodate a double vanity. A large-scale checkerboard pattern underfoot plays off patterns found throughout the rest of the house, and a sleek freestanding tub completes the space. 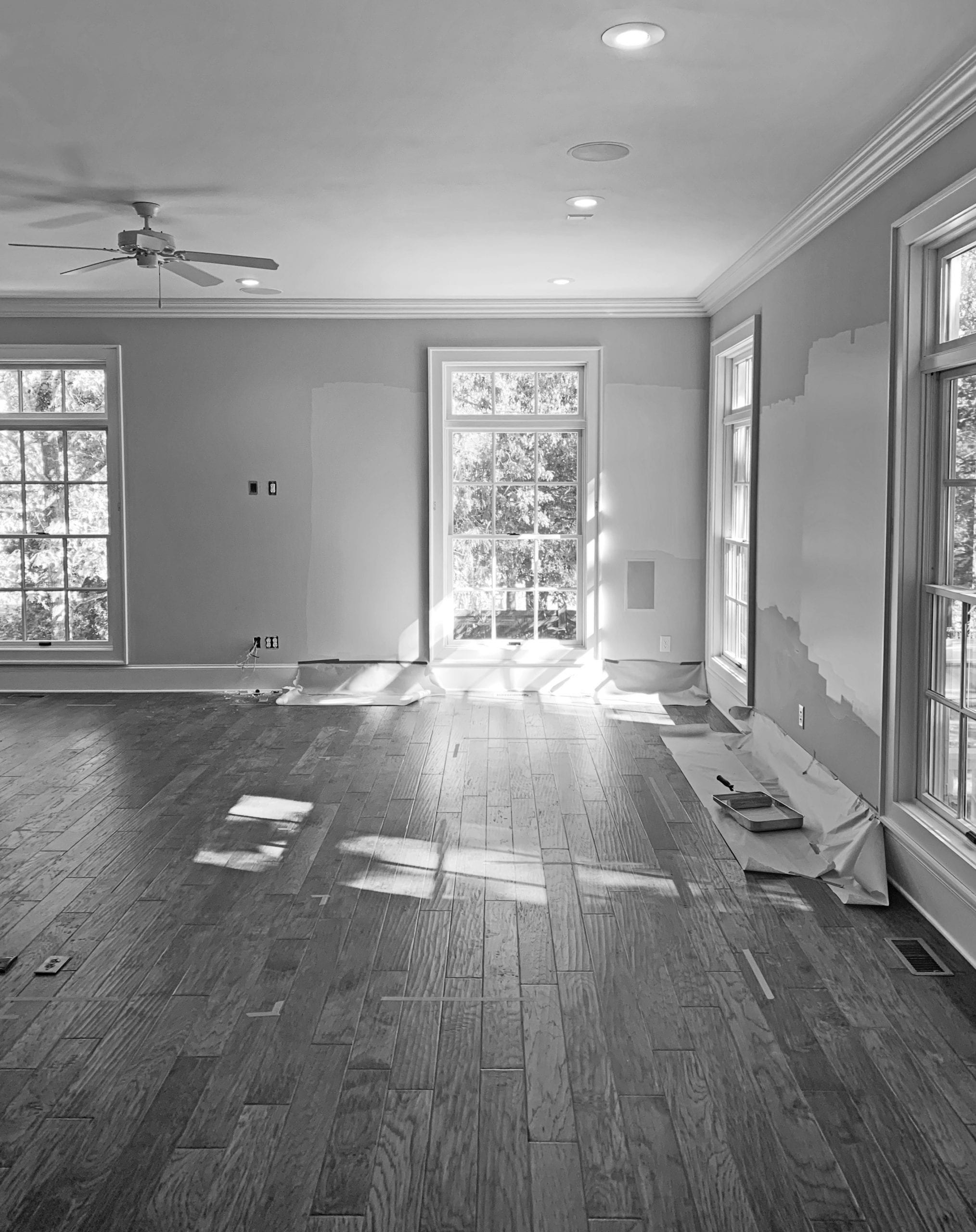 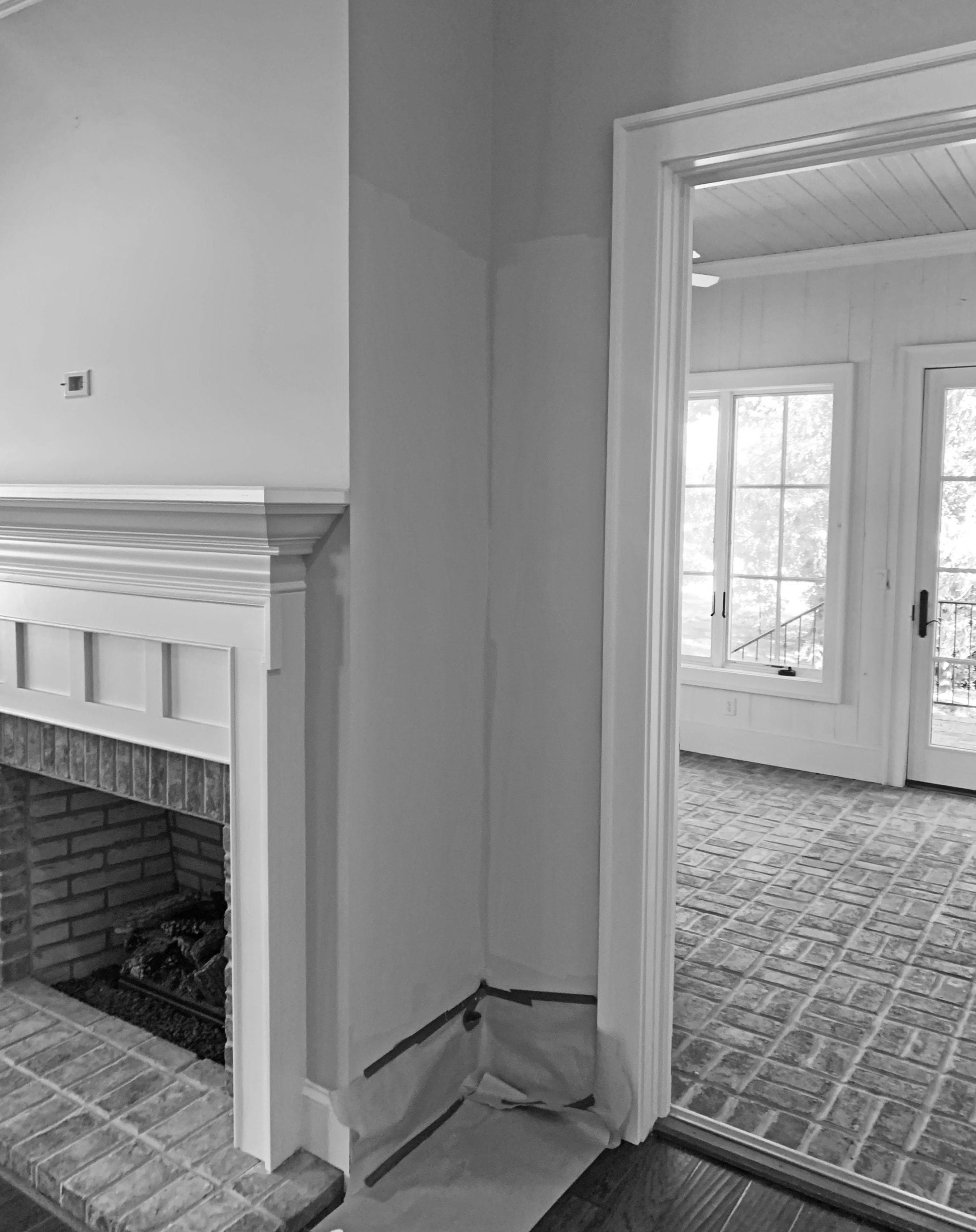 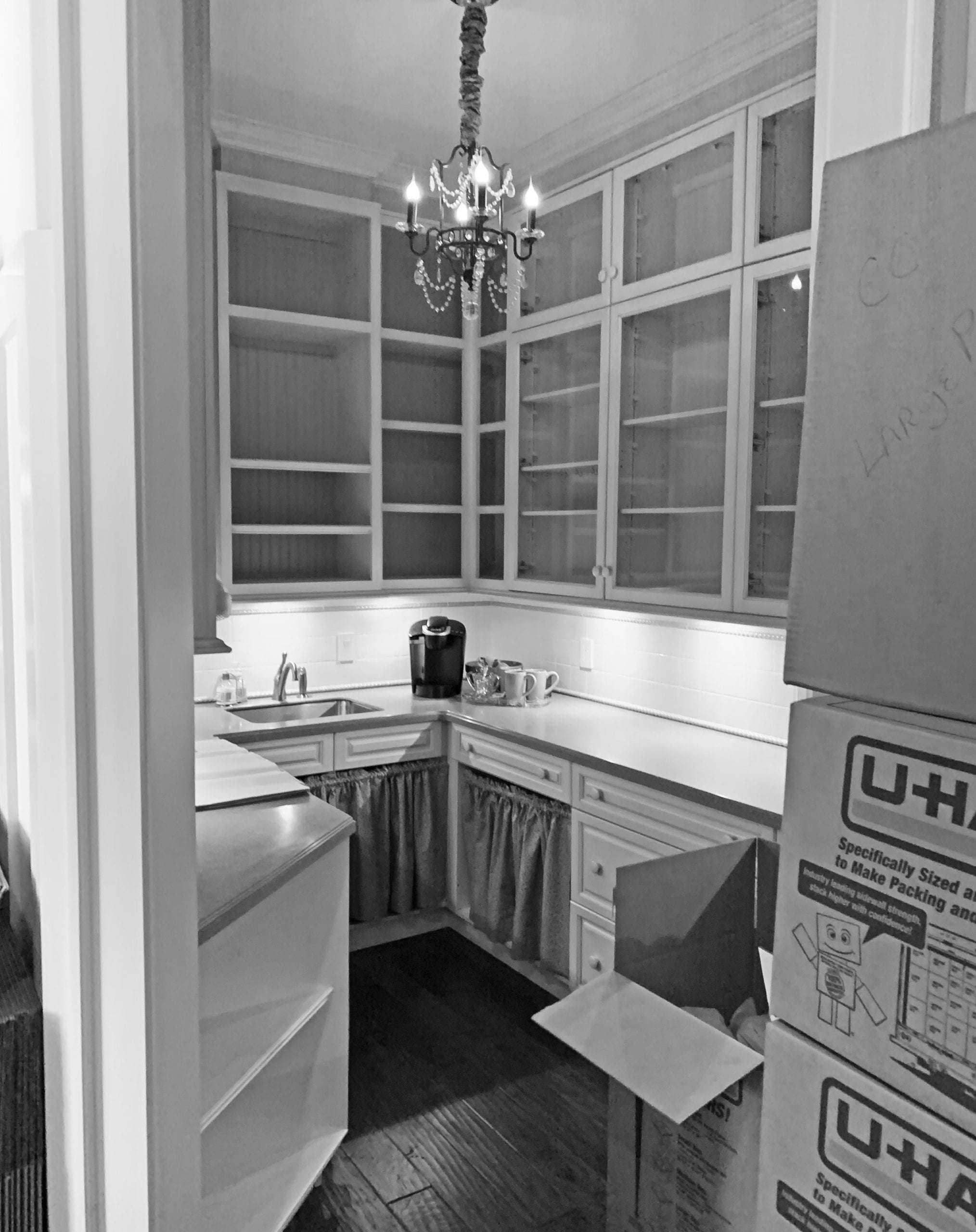 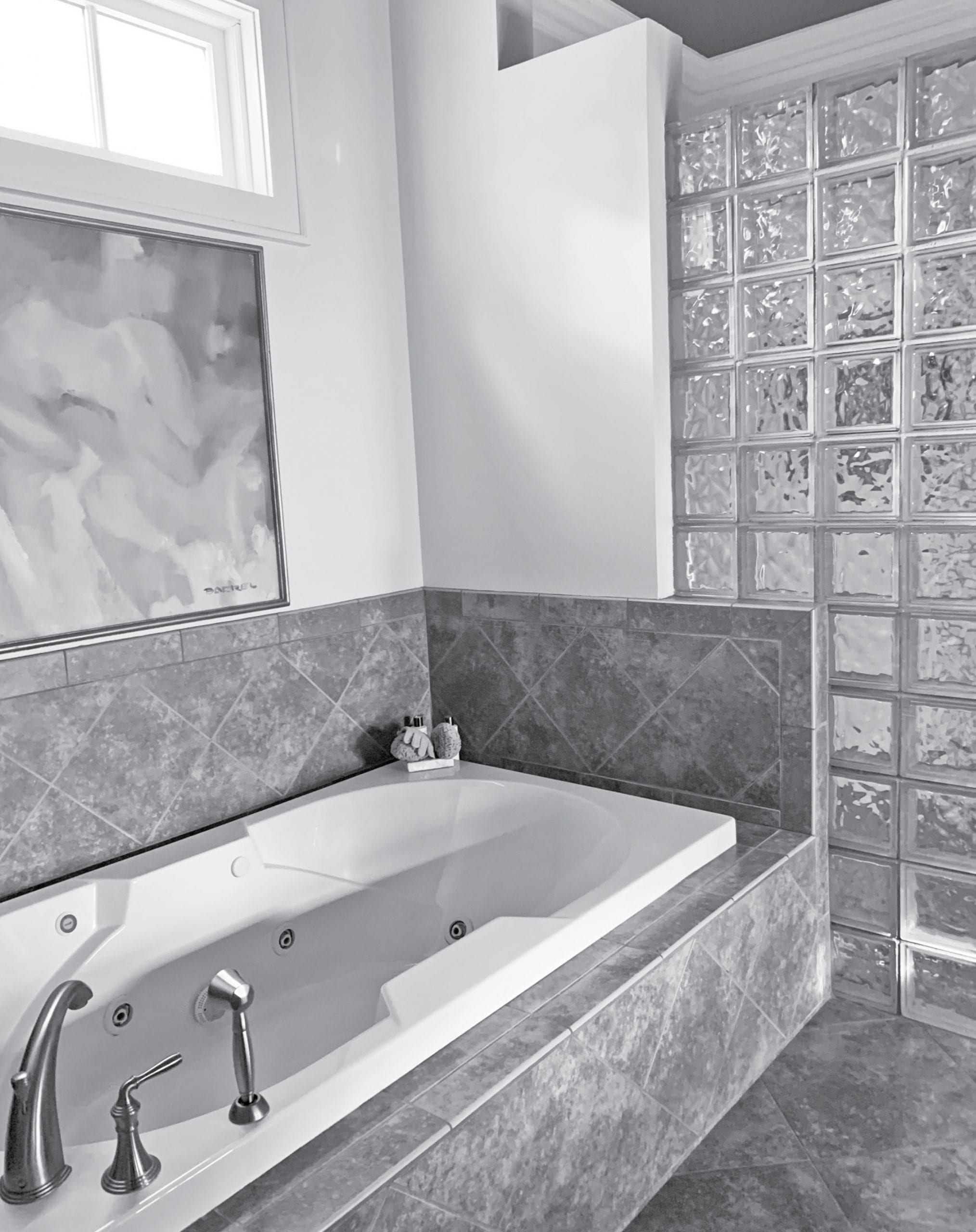