A Dallas designer helps a Northwest Arkansas couple turn an outdoor area into a comfortable, gracious interior addition with a flair for all things natural 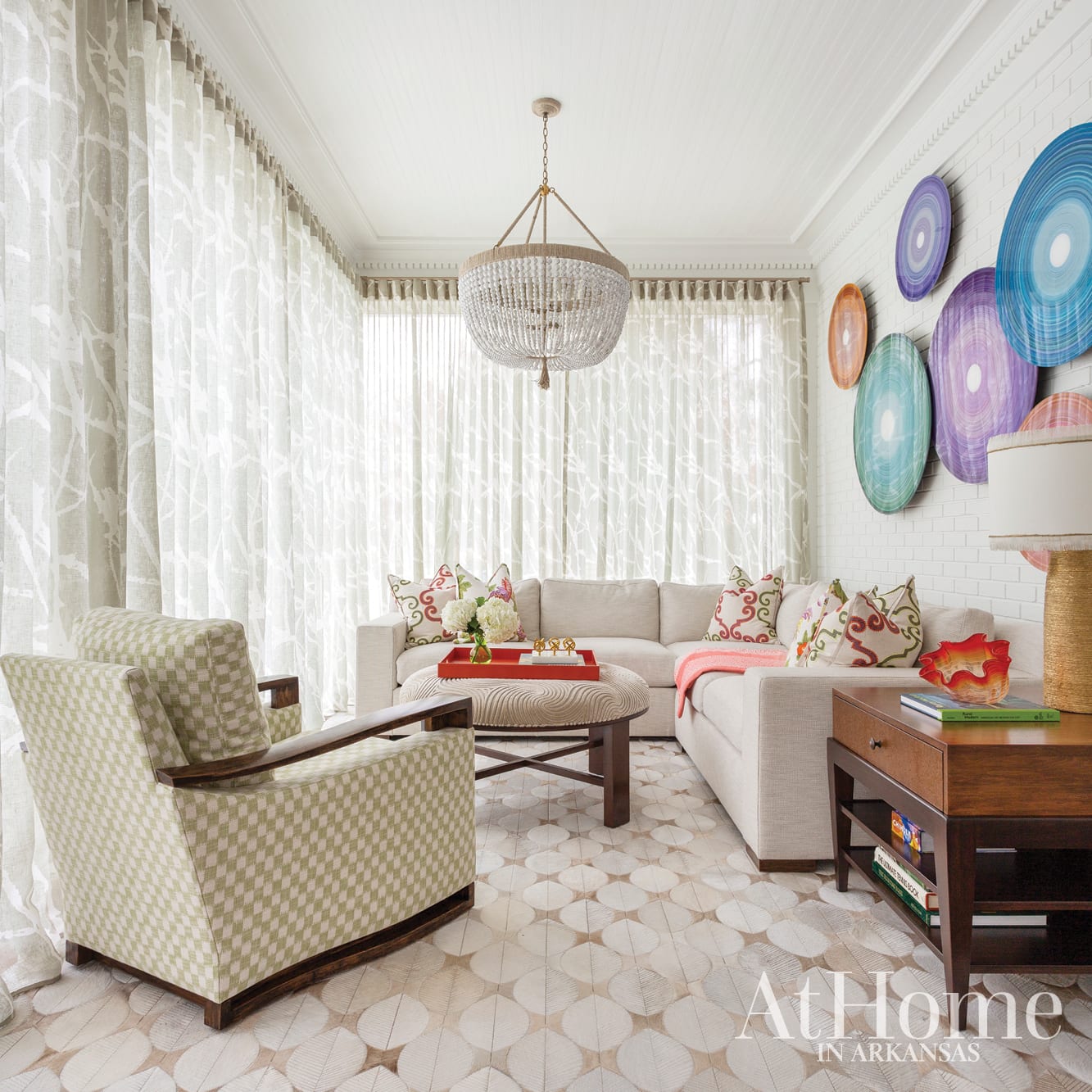 “Comfort and beauty must go hand-in-hand,” says Dallas-based designer Vicki Crew of Vicki Crew Interiors. That was the approach she took when a Northwest Arkansas couple asked for her guidance in enclosing their existing patio to create an addition to their home. “It was an underused patio, and they wanted to make a more comfortable space between the pool and home,” Vicki says.

Since the area was primarily a blank slate, the possibilities seemed endless. However, in talking with the couple, Vicki developed a clear vision of a grand, colorful solarium to connect the main house to this addition. “The wife is a lady of great style and taste, and we wanted this room, in particular, to reflect that,” Vicki says. “The colors are fresher, lighter, and the lines are cleaner,” Vicki adds, noting that this area is less formal than the rest of the home. Since the owners are very family oriented, they wanted the addition to accommodate their extended family as well. Case in point, the dining hall, which has the capacity to seat 20.

Working with Richard Drummond Davis Architects, David Harris Construction, and Andi Stephens of Kitchen Distributors, Vicki helped the couple create a space that’s sure to be well used for years to come. 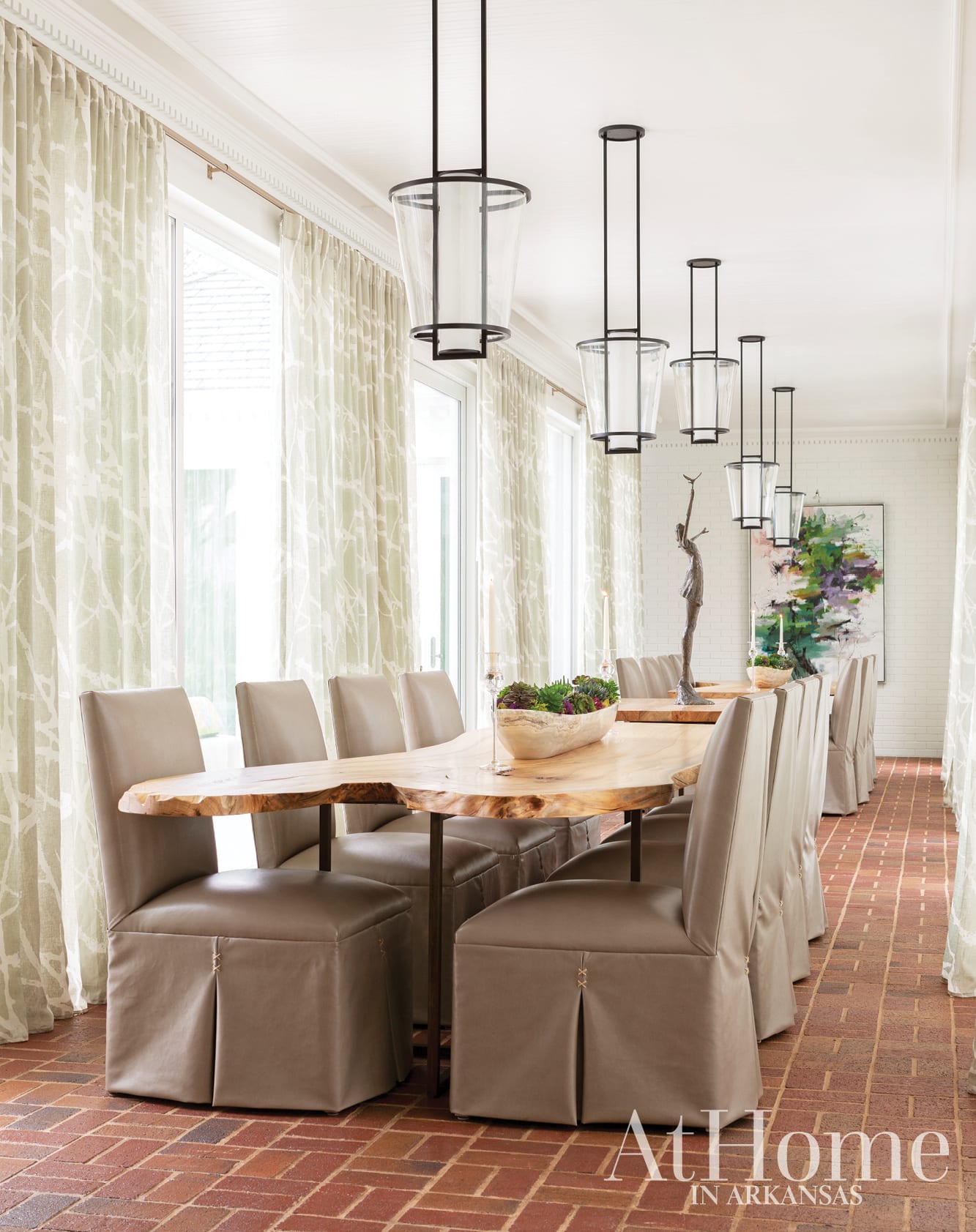 Room for a Crowd
In the dining hall, two American walnut live-edge dining tables pair with pleather-upholstered chairs that wipe clean easily. “These custom William Wesley tables are mirror images of one another and were cut from the same slab,” Vicki notes. A third table (as shown here) can be added in the center walkway to the pool to accommodate up to 20 guests when needed. Holly Hunt lanterns line the galley-style space, illuminating the area at night. 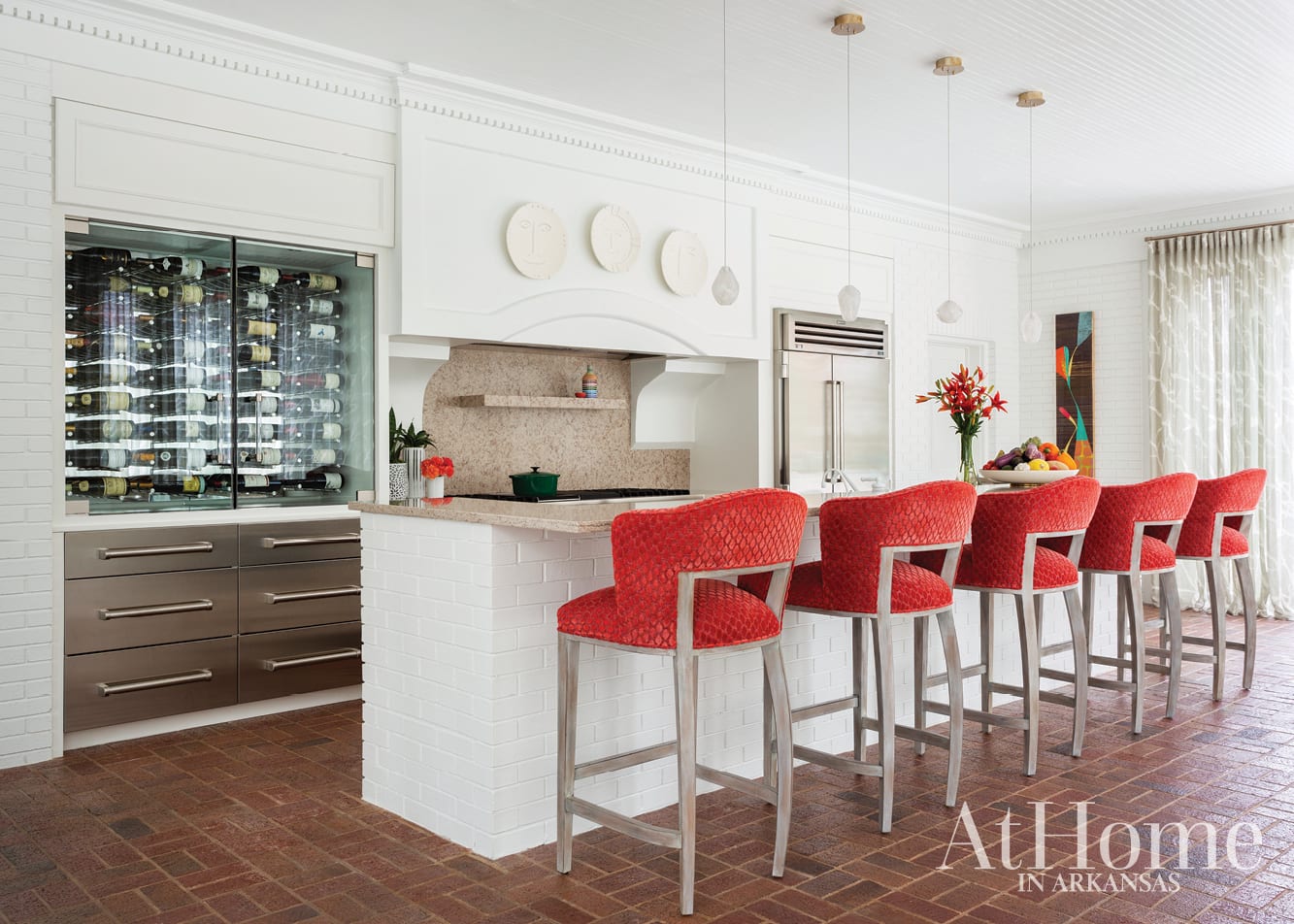 Culinary Creation
The brick bar was a part of the home’s outdoor kitchen before the space was enclosed. Andi Stephens of Fayetteville’s Kitchen Distributors reworked it with pieces suited to the new style, including panel-front appliances and numerous storage drawers with plate pegs and organization features, which do the heavy lifting in a kitchen with no upper cabinets. Additionally, Andi notes the wine fridge was a must-have on her clients’ wish list. “It features both white and red zones and interior lighting for ease of use,” she says. The cabinetry seen below the wine refrigerator is by Wood-Mode and was created to mimic the commercial-style refrigerator seen on the opposite side of the range. Vicki complemented the room’s functionality with high-style accessories, including cut-velvet fabric on the barstools and quartz pendants over the bar. 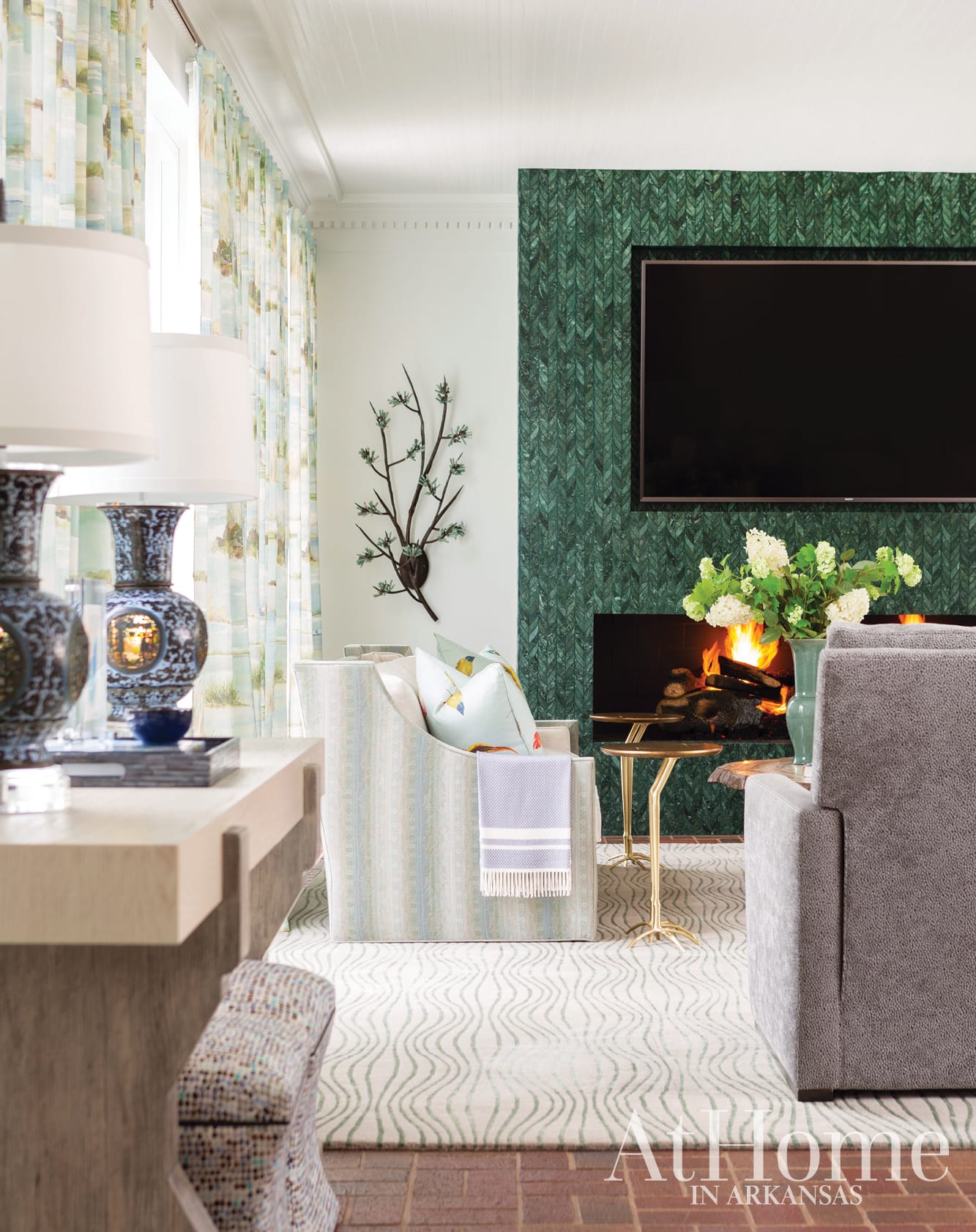 Sconces featuring jade stones flank the fireplace and echo the green of its surround. 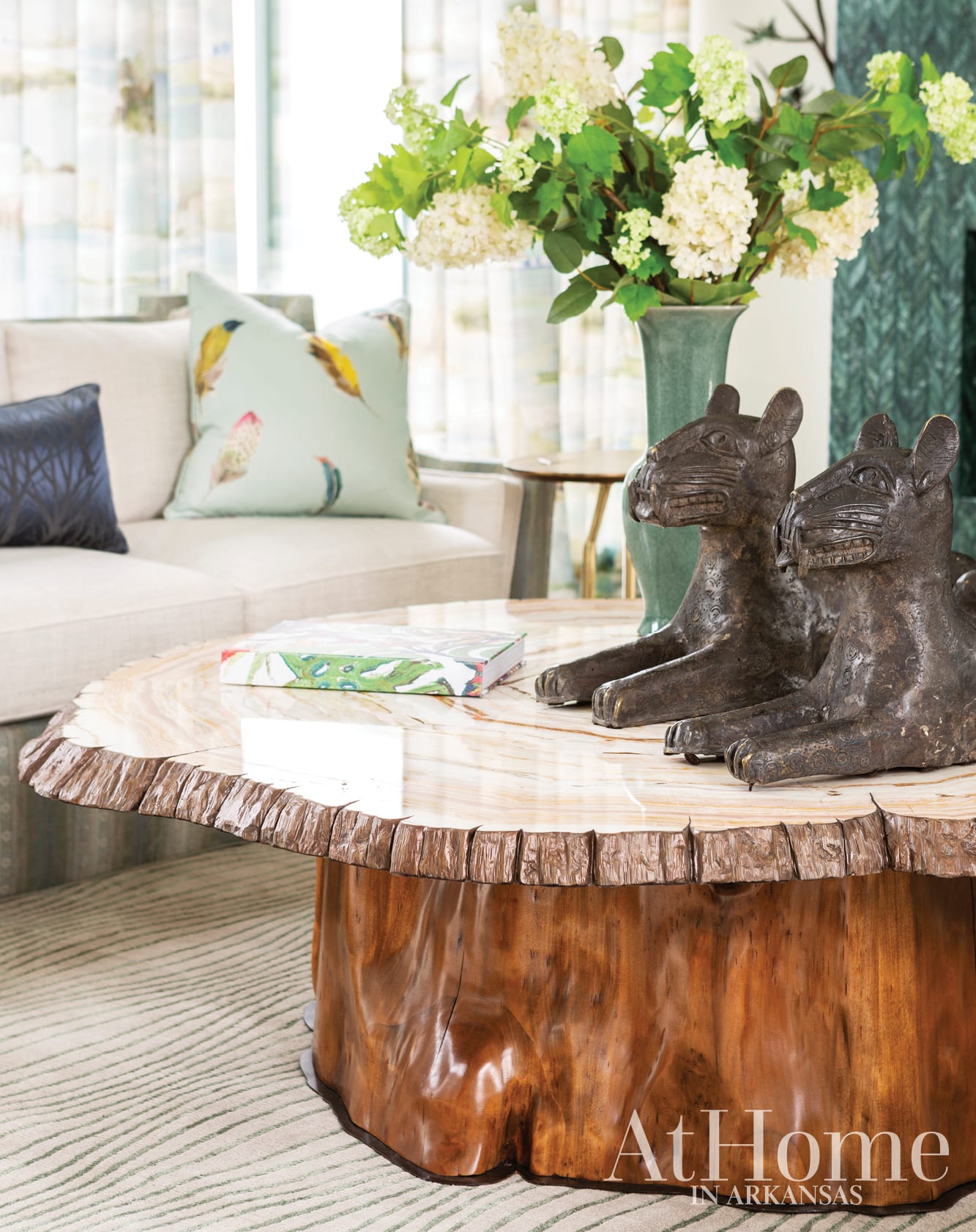 Green Living
An emerald, leaf-shaped marble tile from Ann Sacks sets the tone in the living room, which Vicki notes is the masculine counterpart to the more feminine solarium. “He wanted a big TV and a cozy recliner,” Vicki says of the husband’s requests for the space, both of which were fulfilled—two aubergine-hued recliners face a large television over the fireplace. Vicki turned a pair of cloisonné vases (seen on the console table in the foreground) into lamps. “These were one of my best antique finds ever, and I love to turn pieces like this into functional lamps,” the designer says. 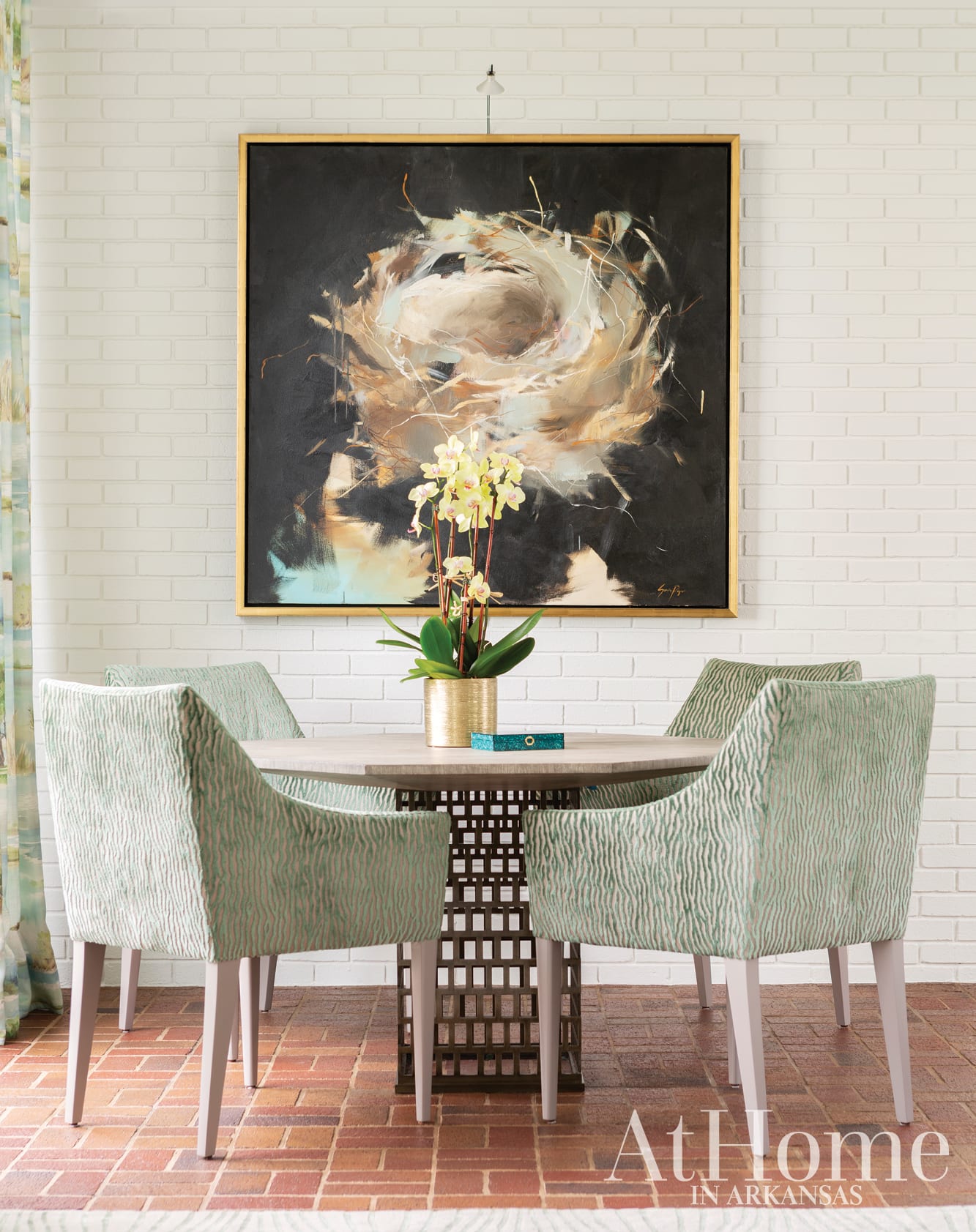 A corner of the living room is devoted to a game table that invites hours-long card games or domino matches. A work by Susie Pryor featuring a bird’s nest harks back to the natural theme of the space. 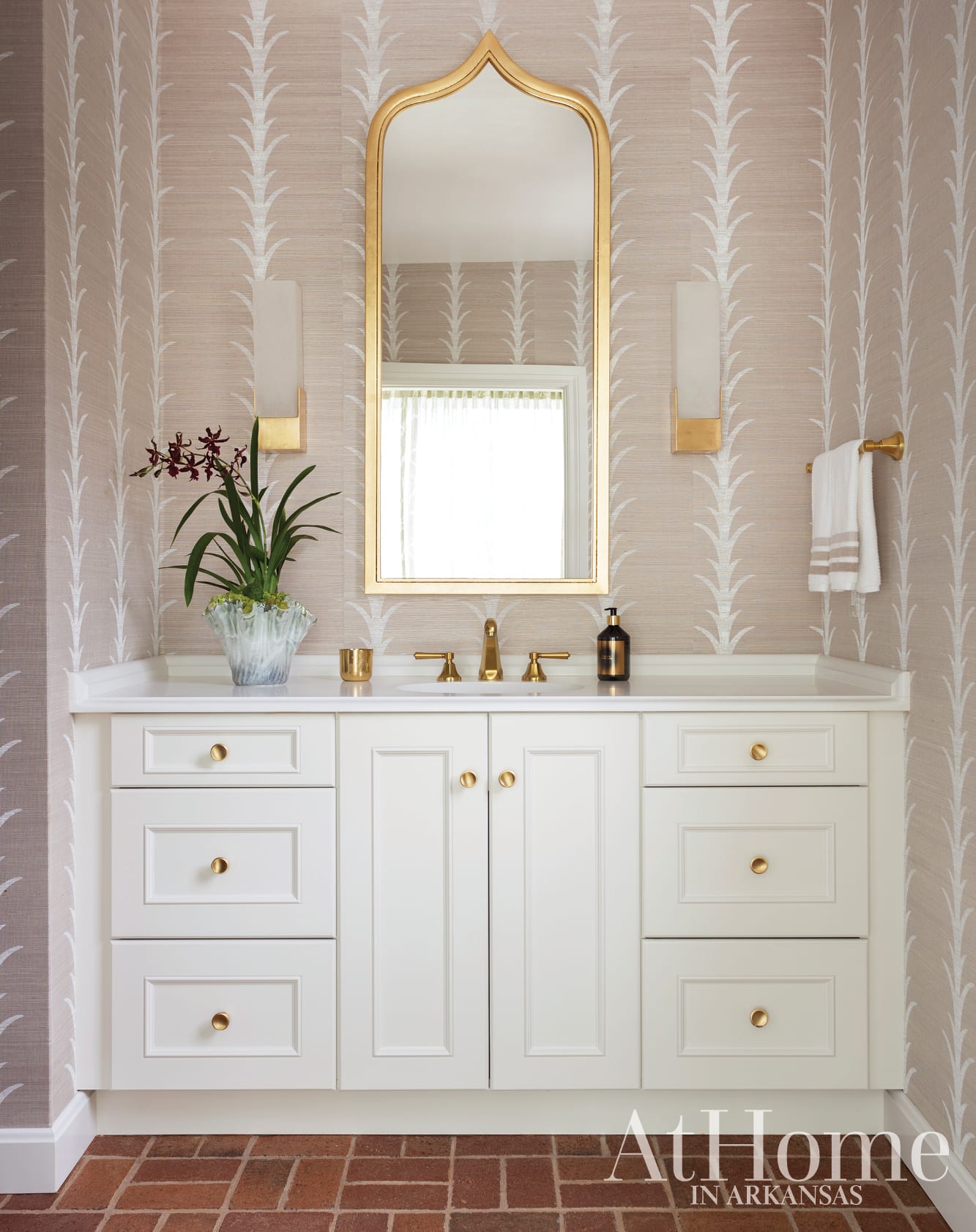 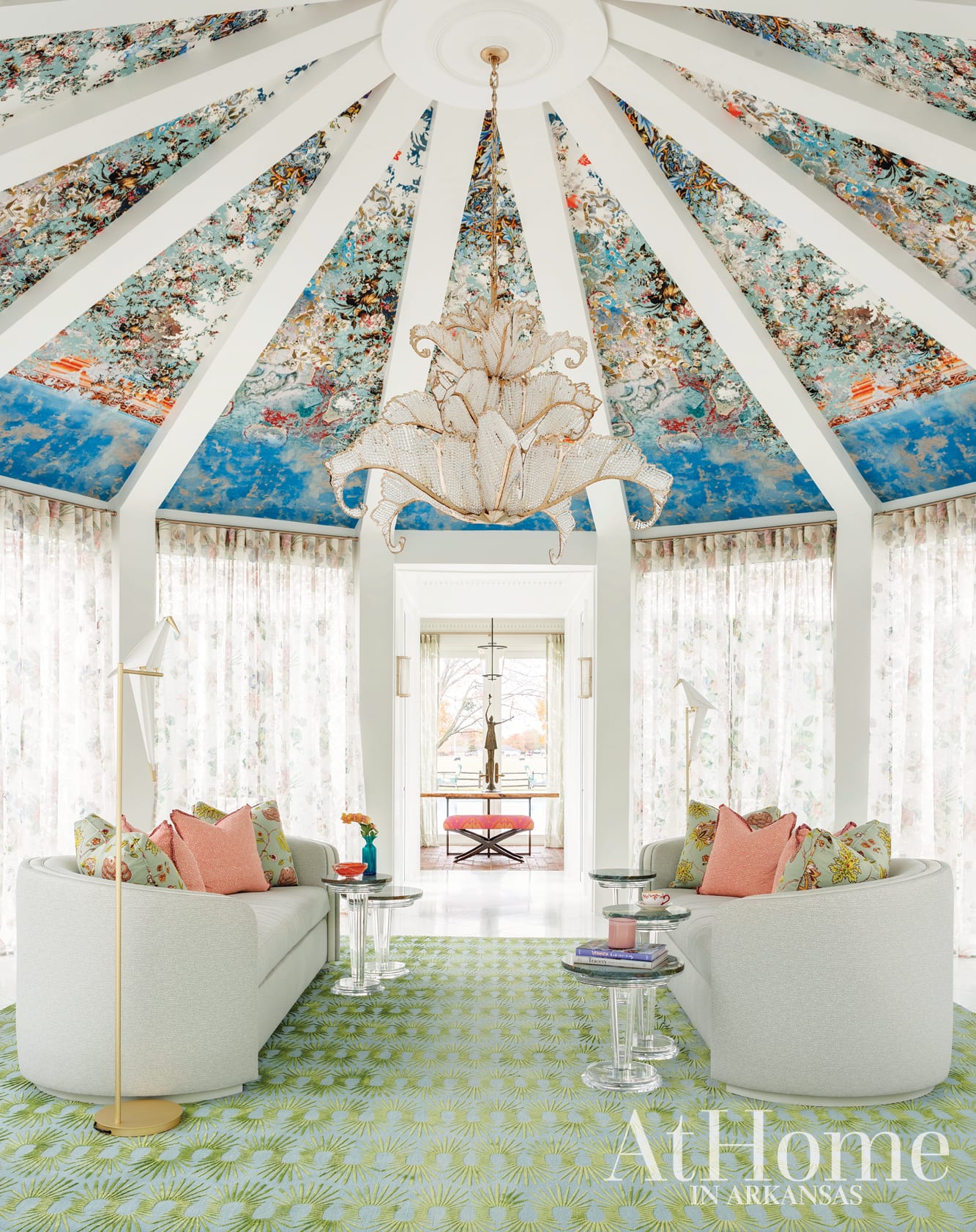 Pièce de Résistance
As Vicki notes, the pinnacle of the design lies in the solarium, which connects the main house to the addition and hints at the grandeur to come. “This space exudes the beauty and femininity of this most gracious homeowner,” Vicki says. A mural created by Jakob Schlaepfer and installed in pie-shaped pieces features flora, Romanesque scrolls, and a sky motif around its perimeter, thus commanding the eye upward. “There was no space for art—because of the glass walls—so the ceiling became the point for art,” Vicki says. Custom furnishings and fixtures, including a four-tier chandelier by Niermann Weeks, complete the symmetrical design of the space, while botanical sheers and a leaf-motif fabric on the chairs are a nod to the addition’s numerous organic elements.