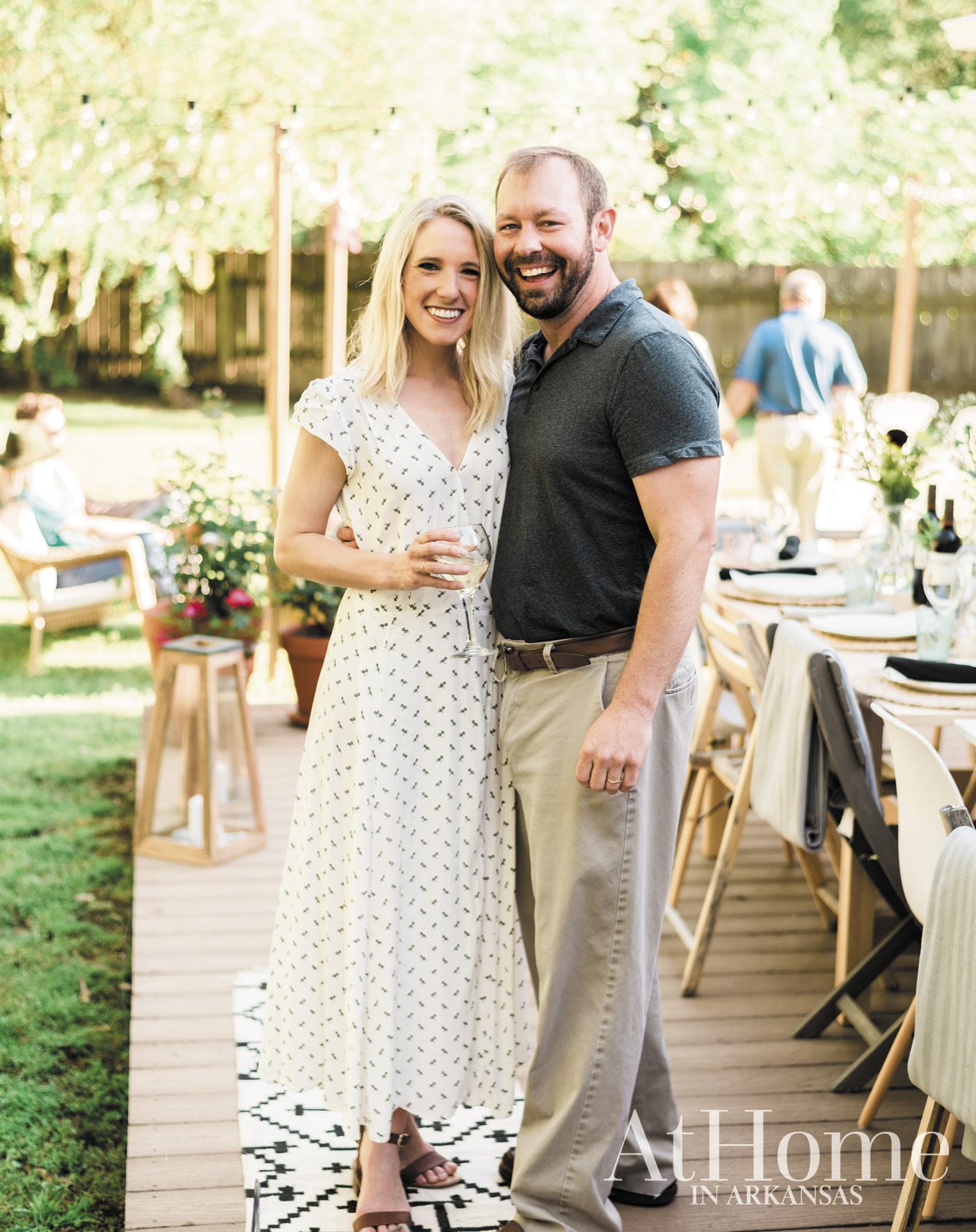 When you first meet Kim Lane, there are a few things you’ll figure out right away. For starters, she loves her home—the city of Conway, her neighborhood surrounded by parks and trails, and the white brick house she shares with her husband, Aaron, and her stepson, Gabe. She’s also passionate about connecting with people, which she gets to do in her day-to-day role as CEO of The Conductor, an entrepreneur-focused program based at the University of Central Arkansas. So it goes without saying that she’s happiest when she gets to combine the two and spend long hours with loved ones at her home.

Kim credits Mette, a family friend from Denmark, with introducing her to Danish culture and instilling in her a desire to place experiences over things. When Kim and her twin sister were babies, Mette was hired as the family’s au pair and lived with them while the twins and their older sister were young. “She had a huge impact on us,” Kim says. “Even after she no longer worked with my family, she would come to visit, and we’ve gone to visit her a number of times. My twin sister even lived in Denmark to au pair for Mette years later.”

On one of those trips to Denmark, Kim and her twin took part in the country’s Sankt Hans, a celebration surrounding the summer solstice on June 21. “It’s the longest day of the year, so it doesn’t get dark until close to midnight there,” Kim says. “In the Danish tradition, you bring your picnic basket out to the beach, eat, make a fire, and just hang out.”

To honor that tradition and the lifelong friend who introduced it to her, Kim and Aaron decided to translate the Danish tradition into a backyard party for their Arkansas friends and family. 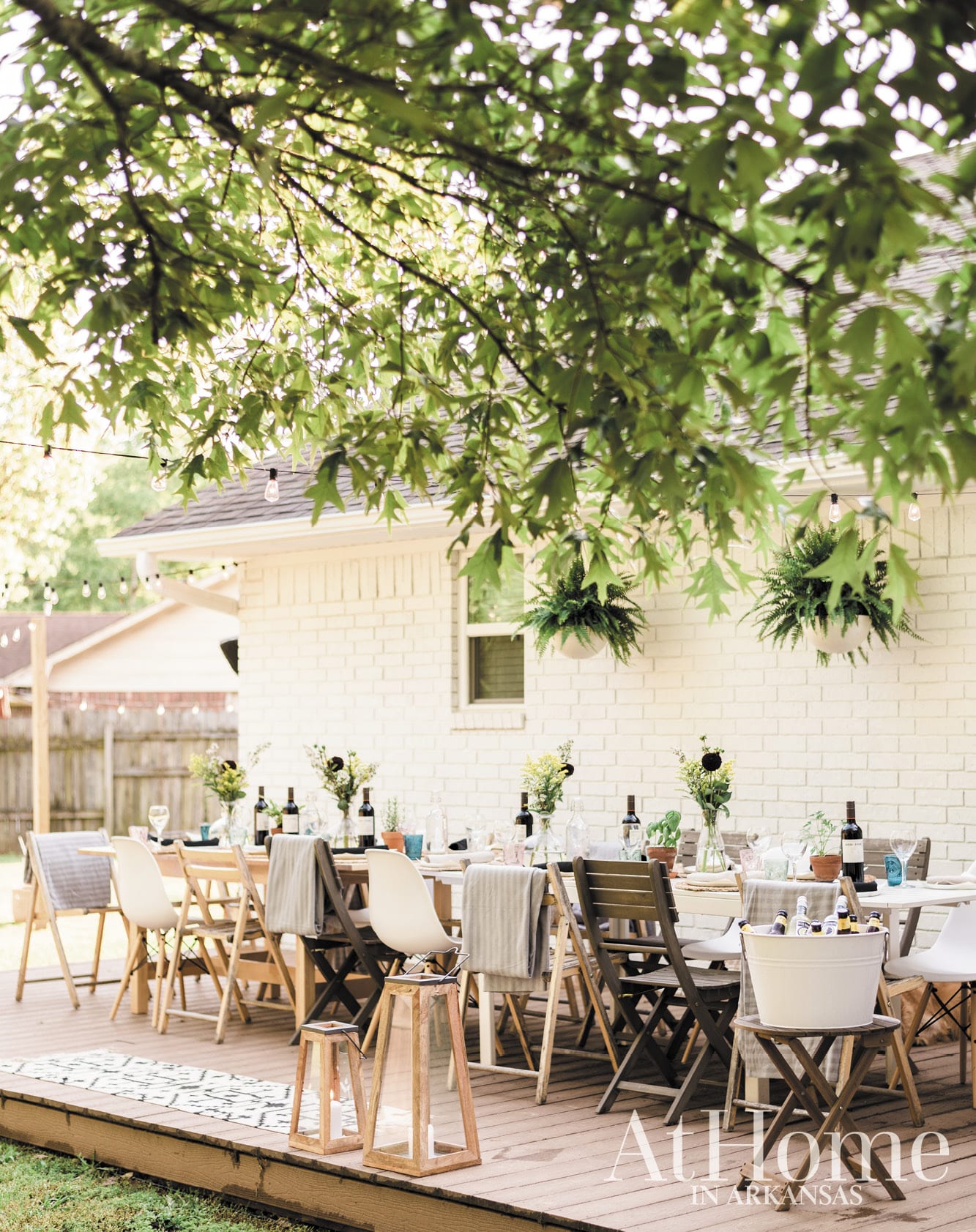 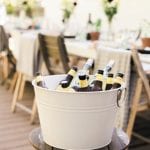 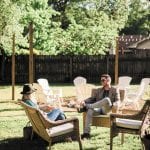 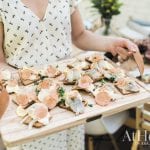 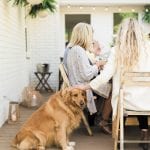 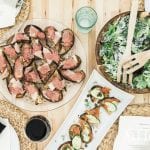 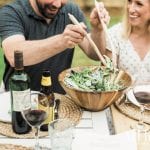 Let the Time Pass
One of the places where Kim and Aaron like to spend the most time is on their back deck, which they built to serve as the dance floor at their wedding—also a farm-to-table dinner party in the backyard. “Another piece of Danish culture that we’re obsessed with is the concept of hygge, which is all about togetherness,” she says. “We’ve had many, many times where we’ve lit tall candles out here and talked until they’ve burned all the way down.” 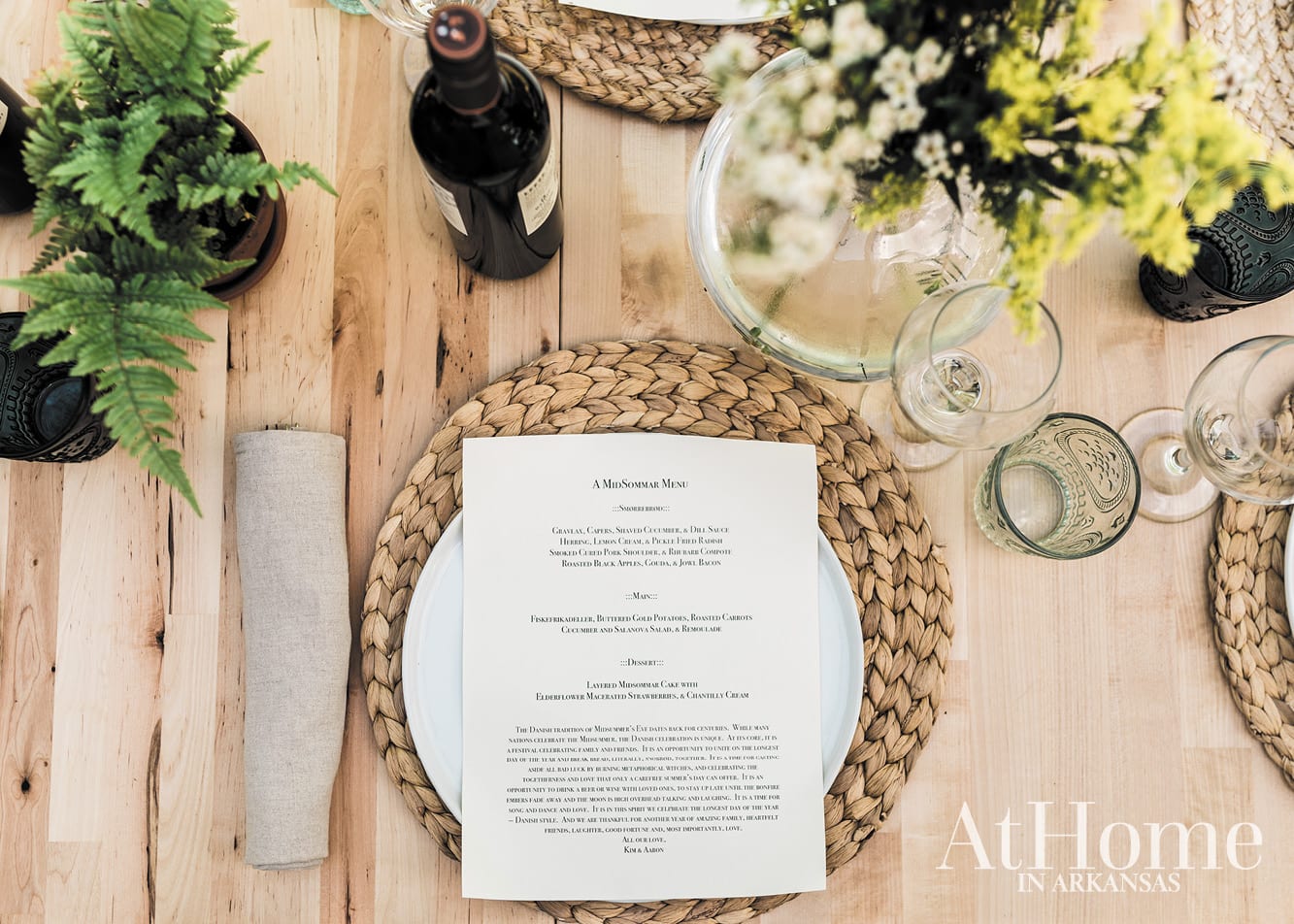 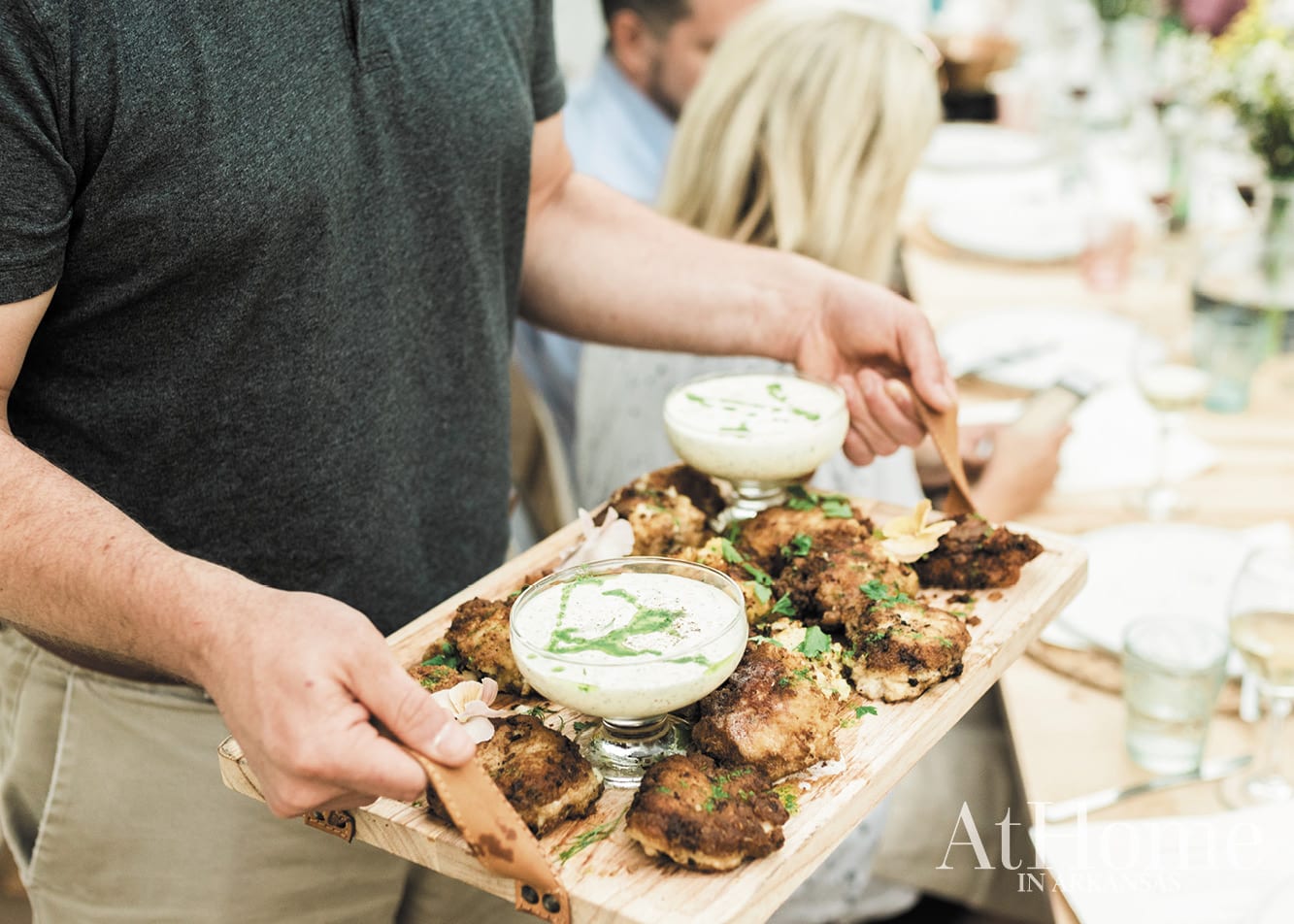 European Feast
When it came time to set the menu for this gathering, Kim reached out to WunderHaus, a Conway restaurant whose owners describe its fare as “farm-to-table European soul food.” She worked with Jacqueline Smith, who co-owns WunderHaus with her husband, brother, and sister-in-law, to develop a line-up that reflects the Danish reliance on seasonal and local availability. “We began with smørrebrød, the famed open-faced sandwiches that are ubiquitous in the Netherlands. We see variations on this dish in Czech, Norwegian, and Austrian cuisines,” Jacqueline says. “One of the wonderful things about relying on local, seasonal produce and focusing on broader European culinary traditions rather than regional cuisine, like Danish, is finding commonalities in these cooking traditions.” 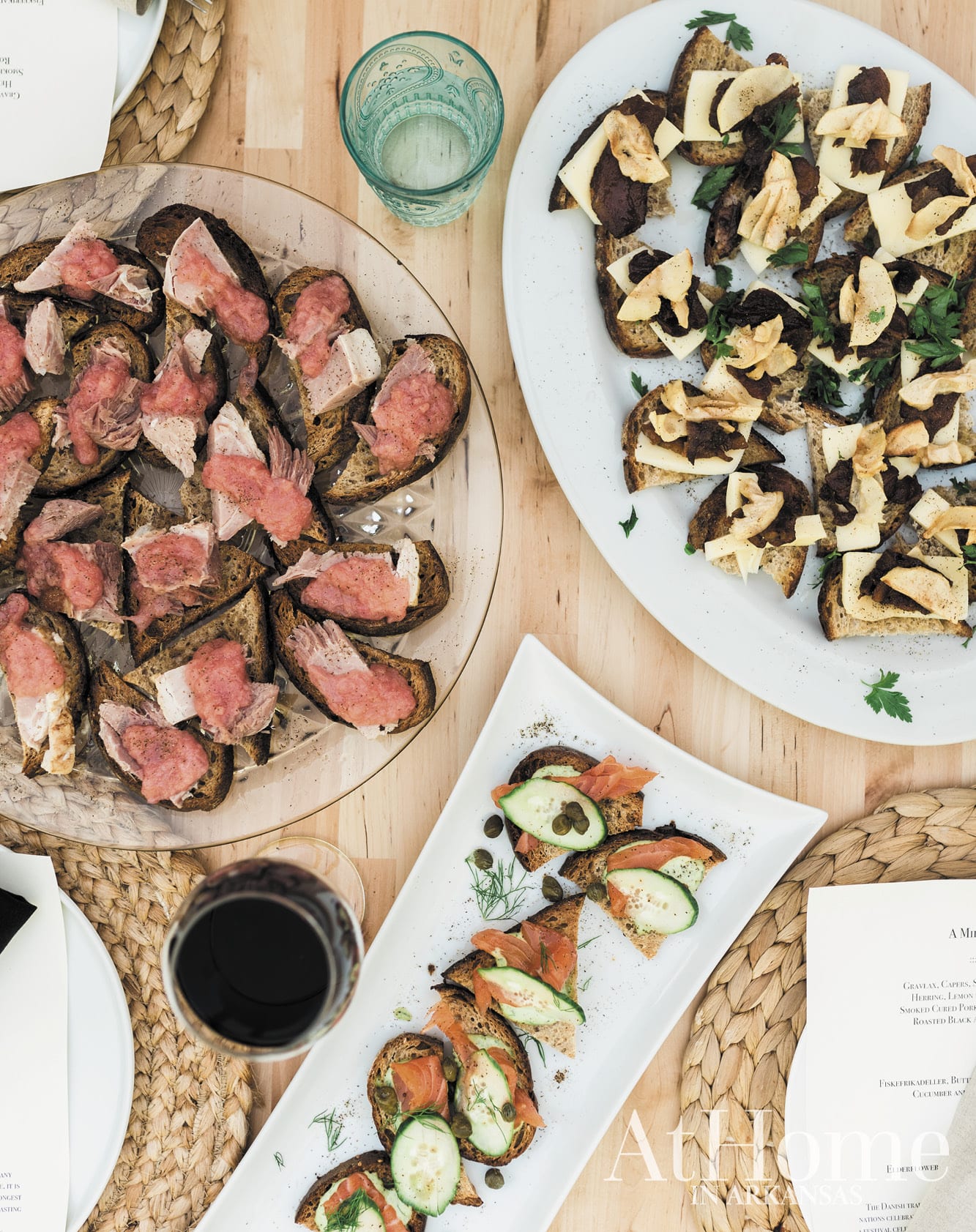 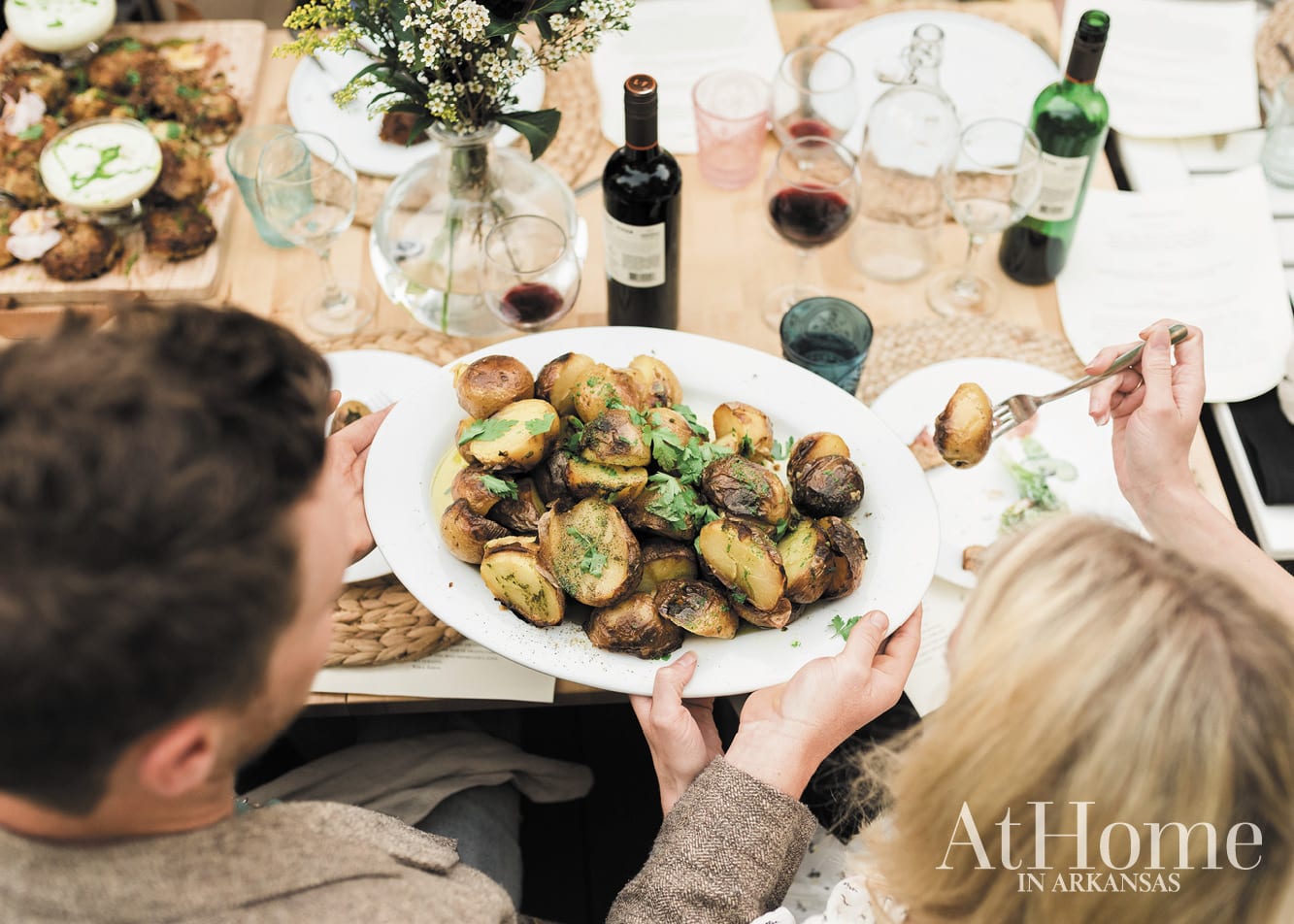 Cheers to Comfort
Kim took direction in the design of her living spaces from the Danish as well. “Their architecture is very simple, everything is white, and there’s a lot of indoor/outdoor spaces,” she says, adding that she also tries to follow their example of minimalism. To that end, she collects mismatched tables, chairs, and tabletop accessories from around the house to use at her gatherings, which keeps the atmosphere cozy and casual. “I basically designed the whole house with hosting people in mind,” she says. 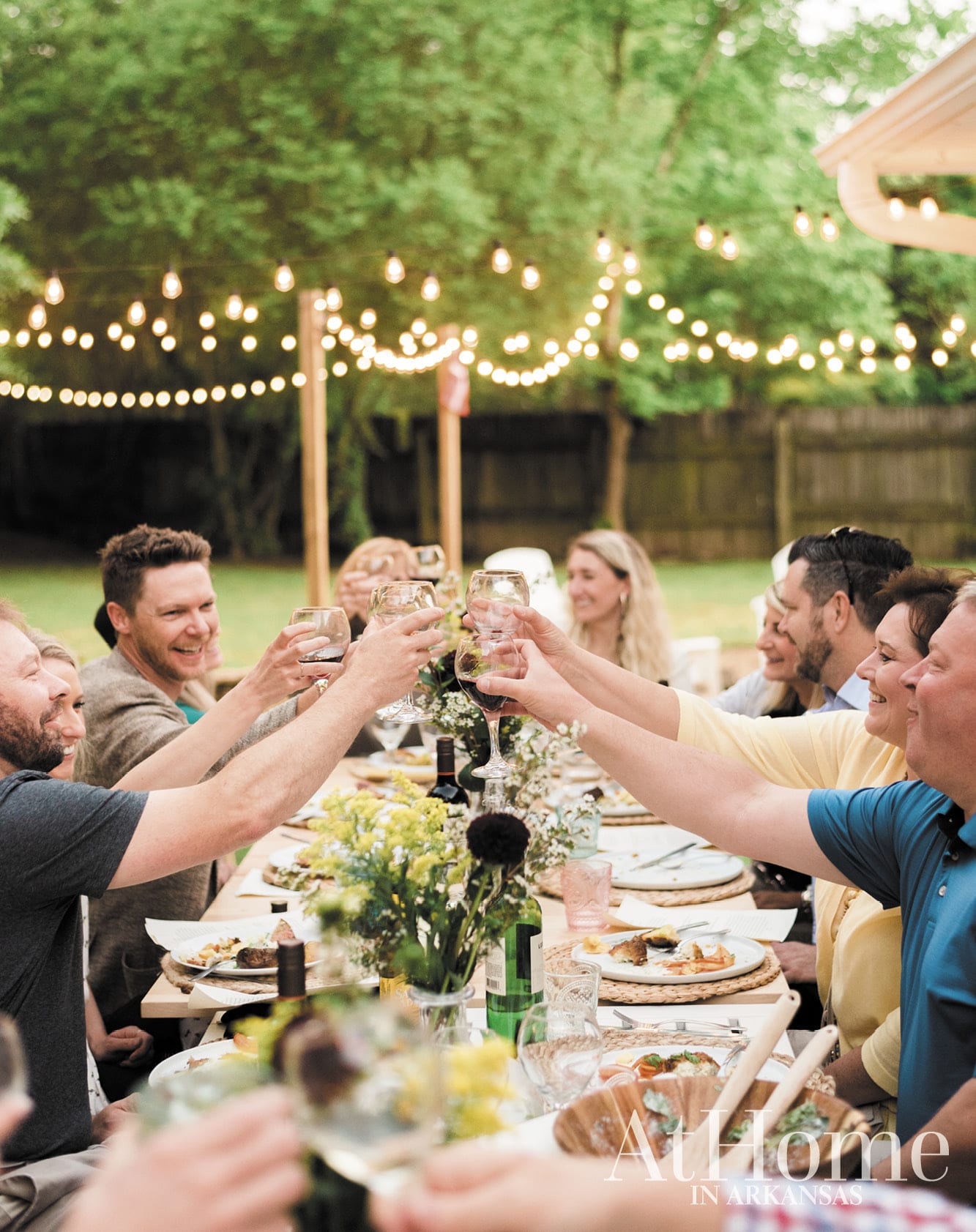 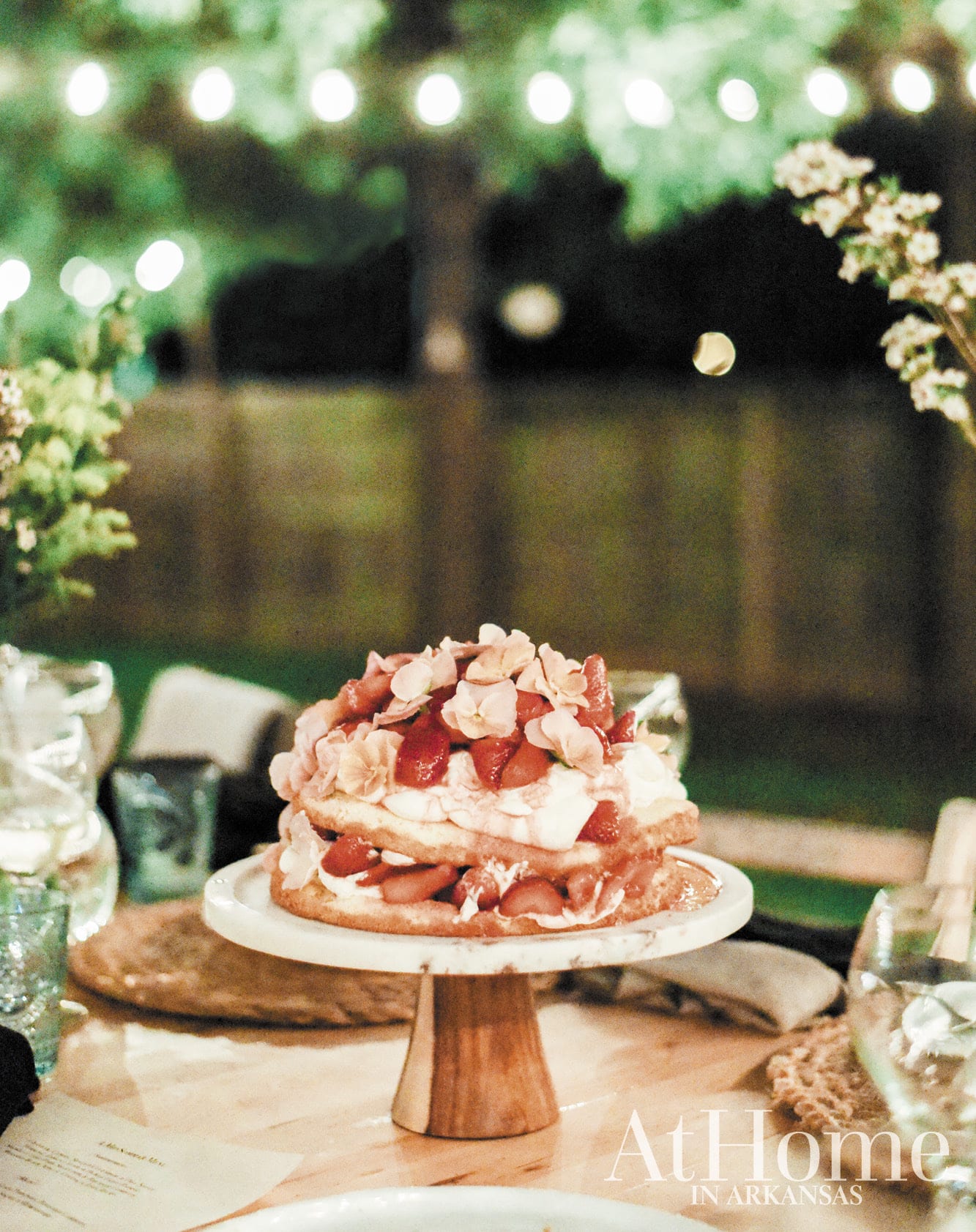 Since strawberries are a staple of summer in Denmark, WunderHaus prepared a layered cake with elderflower-soaked berries and Chantilly cream for dessert. 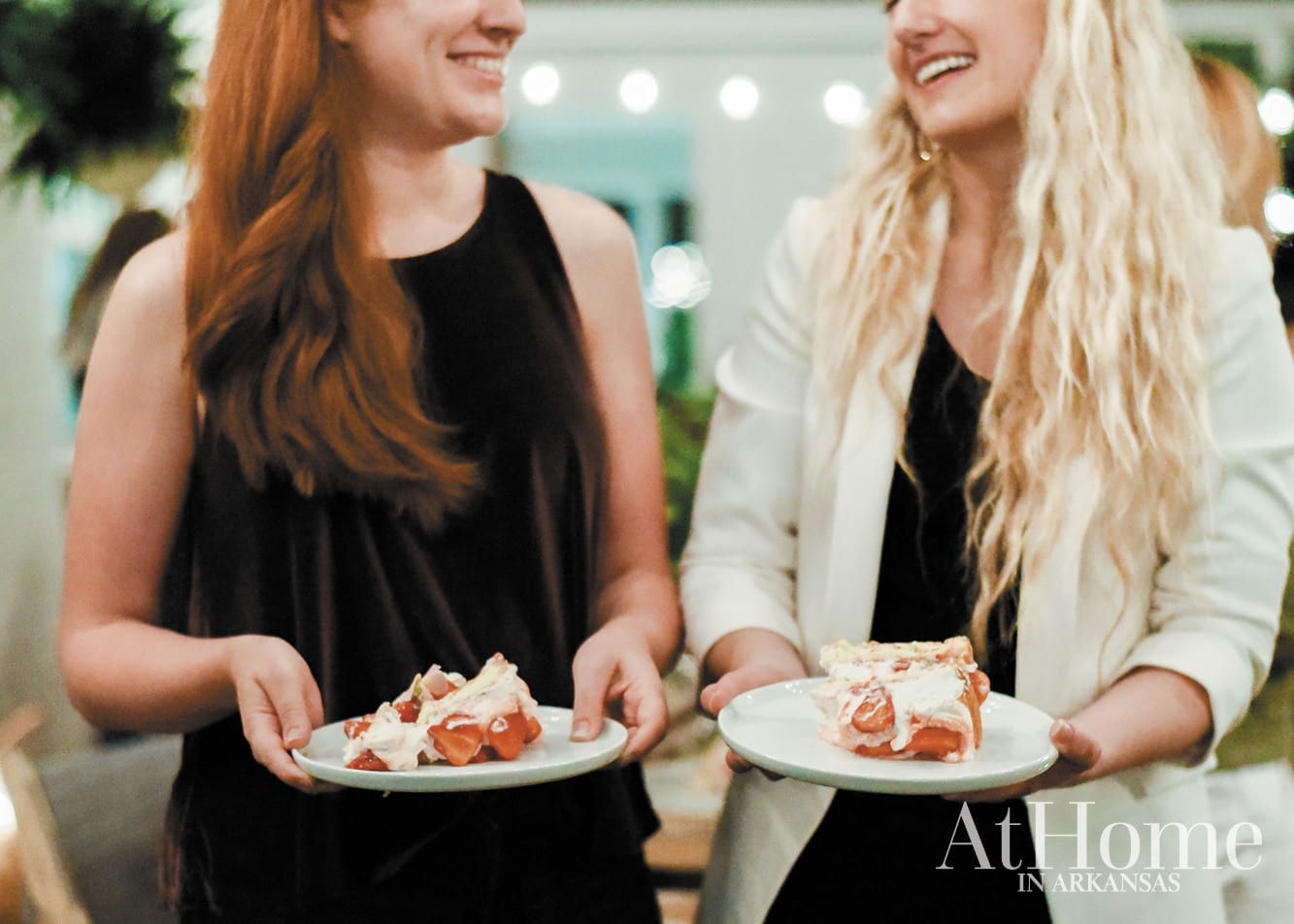 Light the Fire
“The iconic part of the midsummer party in Denmark is that everyone has huge bonfires,” Kim says. “The country has a really long coast, so when you look up and down the beach, you see bonfires all the way down.” Traditionally, groups cook snobrød, or twisted bread, on sticks over the open fire, much like Americans roast marshmallows for s’mores. While it was hard to replicate the beach in this Arkansas rendition, Aaron built a fire in the couple’s firepit and made dough so guests could experience this additional piece of the traditional celebration. 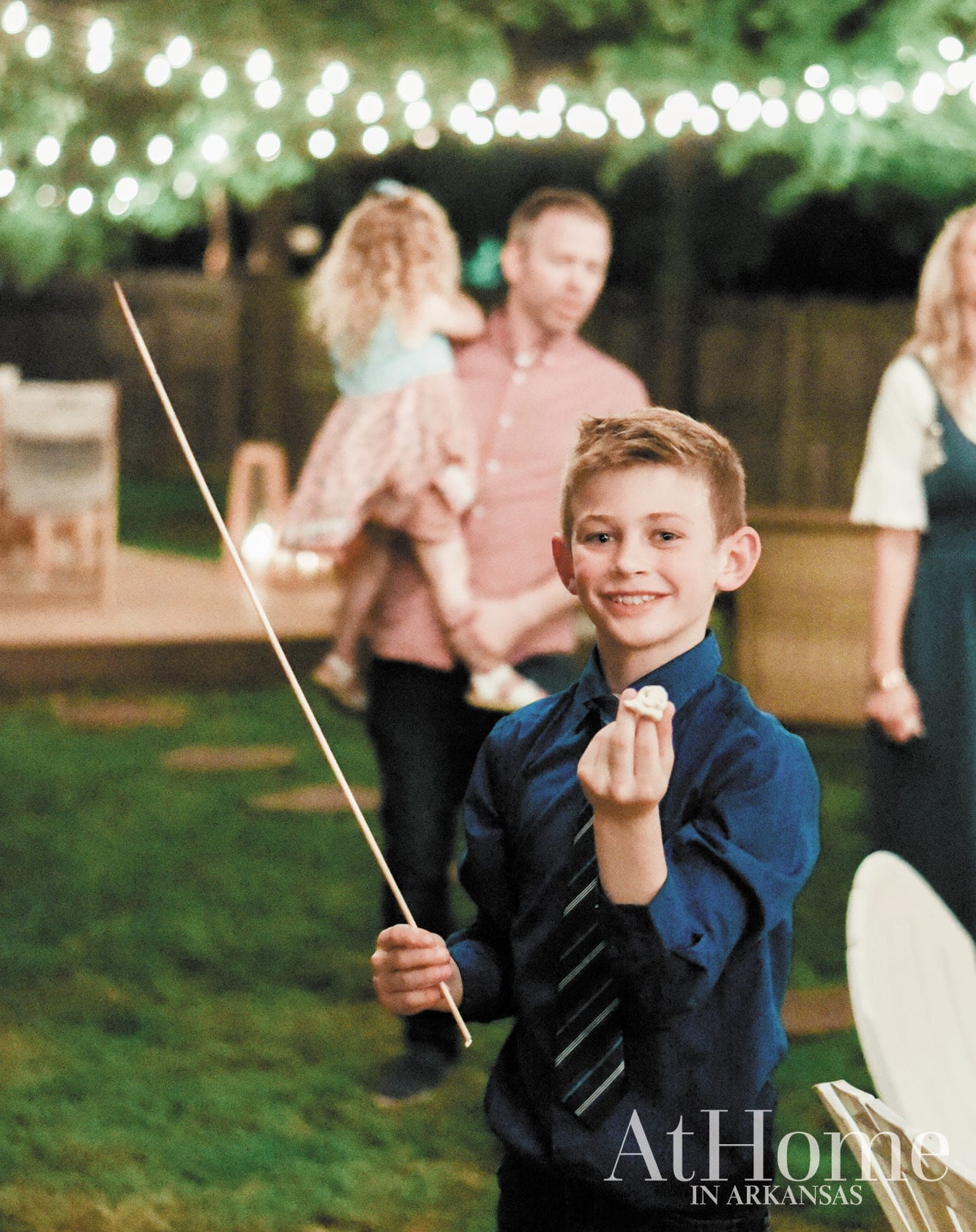