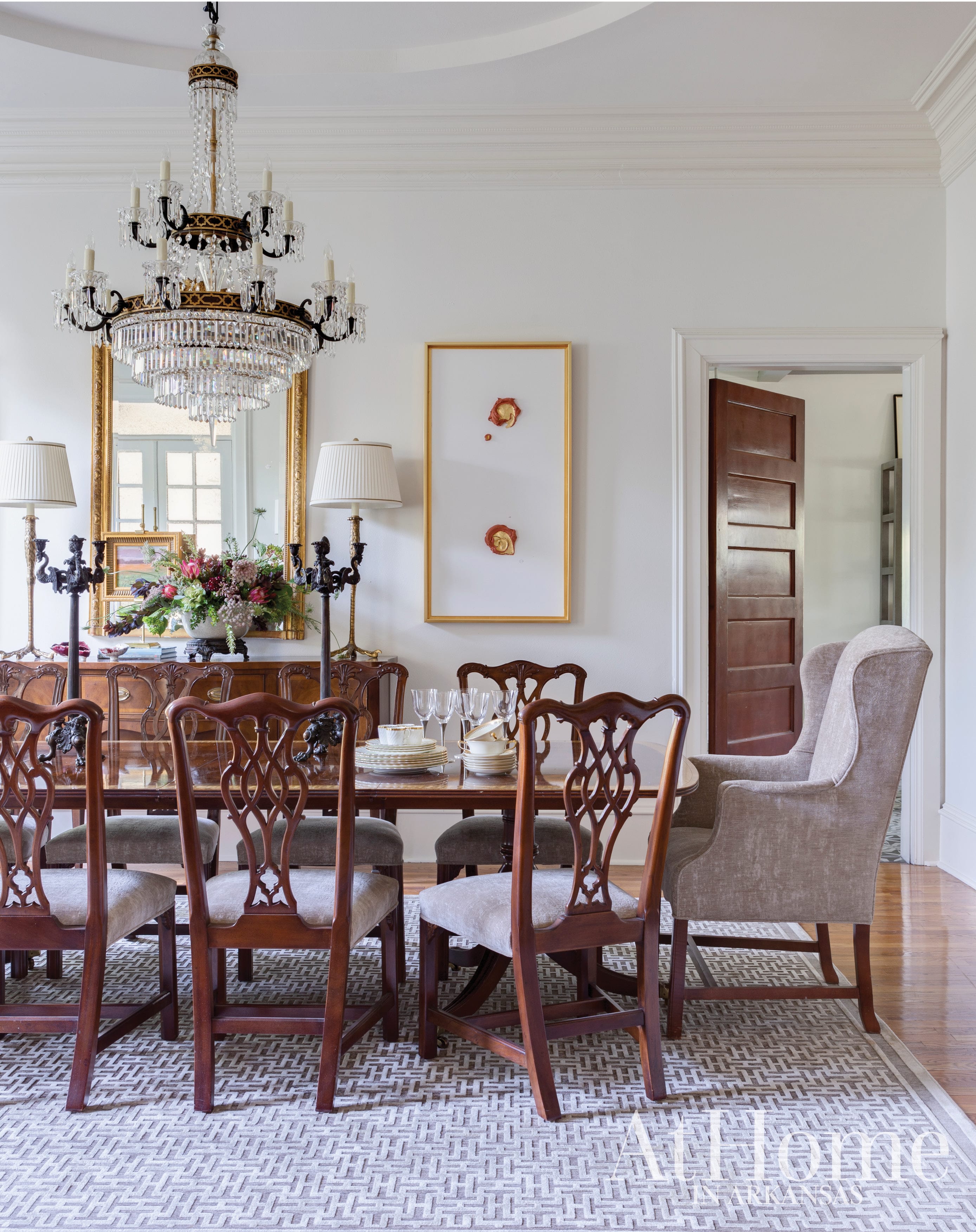 When designer Jeremy Carter decided to buy a house in downtown Little Rock, he first had his eye on the Villa Marre. “I have always wanted to live there, ever since I was a little boy and watched Designing Women,” he says. “It came up for sale, and I almost did it. But there are so many restrictions with it being a historic property—you can’t paint the woodwork, you can’t change out the lighting. I was like, I’m a decorator! I’m not going to live with someone else’s things,” he laughs. 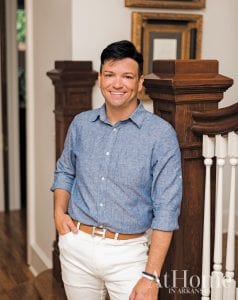 Luckily, it wasn’t long before Jeremy—who is also proprietor of The Shade Above Lighting Collection—came across another historic property in the Quapaw Quarter for sale. This one had seen several updates since it was built in 1905—once in 1924 and again in 1998, Jeremy says. Those updates meant that he was free to put his own spin on the design of the home, but because he loved the historic nature of it, he was mindful when mixing new with the old.

“When I bought it, it was technically live-in ready,” Jeremy says. “I hired a painter to paint the foyer, and that was kind of the ball that started rolling. Once I started, I couldn’t stop.” He chose Benjamin Moore’s “Vapor” for the main spaces to give his antiques and original artwork space to shine, but left the original mahogany doors and trim around the mantel in the formal living room in place. He paired pop art with European furniture and contemporary finishes with traditional shapes, so even in rooms with an abundance of antiques, everything feels fresh.

“Even when I decorate other people’s homes, I don’t like it to feel like you walk in and you know exactly where I got that painting or what I got at market,” he says. “I like to collect stuff as I go. On any project, I’ll maybe paint and do the upholstery, and then everything after that is organic.” 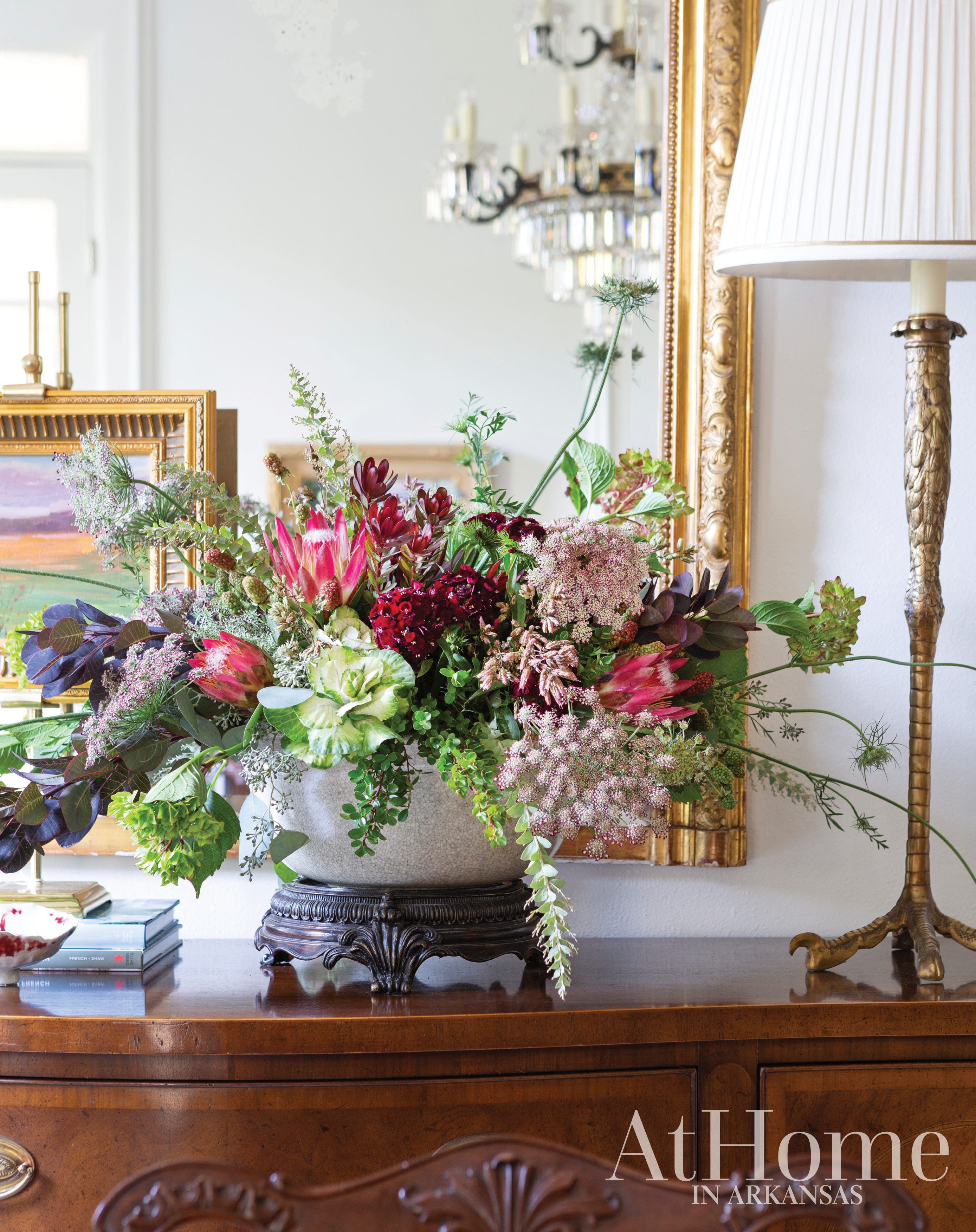 A pair of bronze ostrich leg lamps flanking the dining room mirror are replicas of Tiffany & Co. originals, and the chandelier is one of the only two light fixtures Jeremy did not replace. 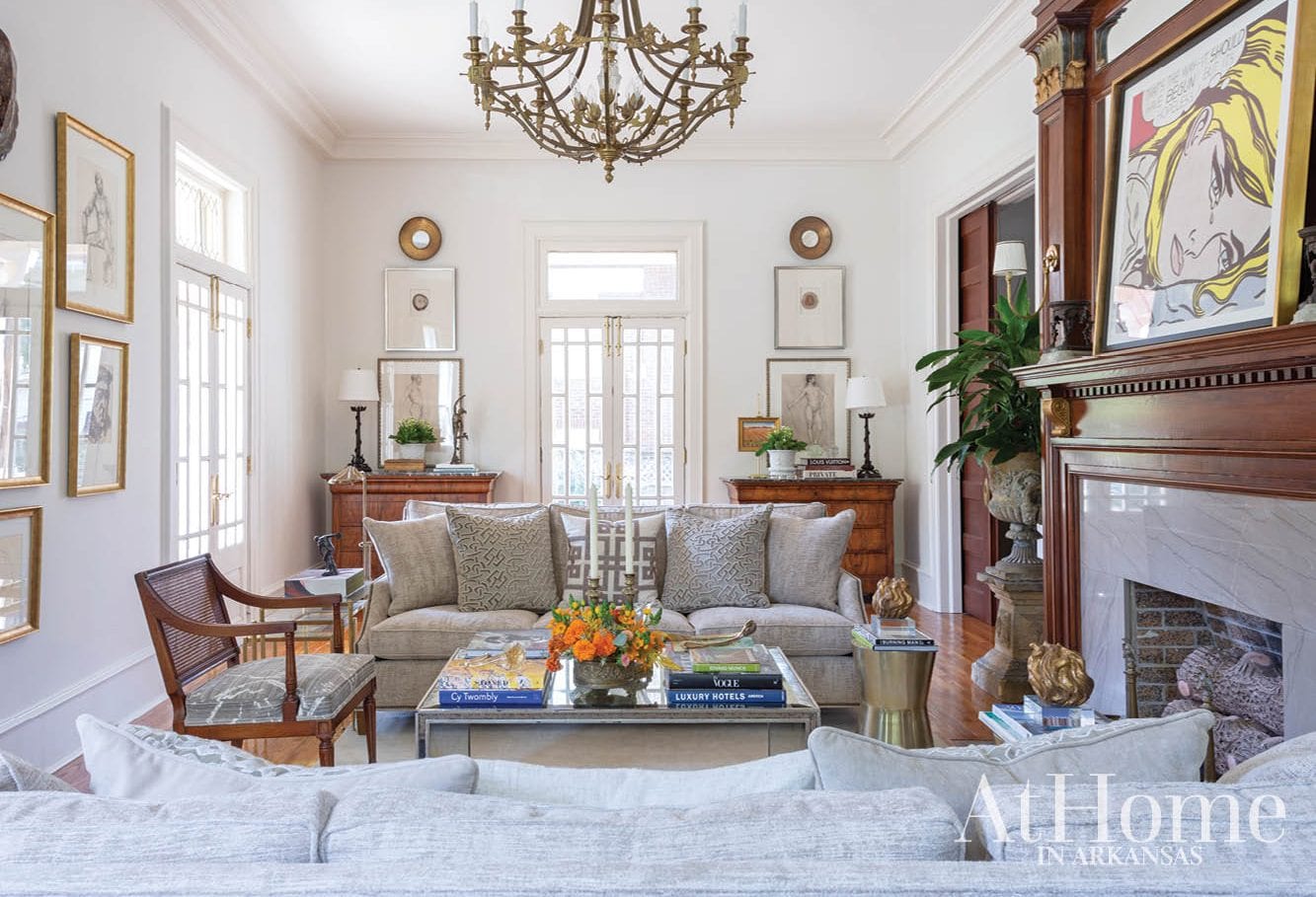 In the formal living room, a collection of figure drawings, a turtle shell on display, and a print of Roy Lichtenstein’s “Hopeless” showcase Jeremy’s eclectic taste in art. 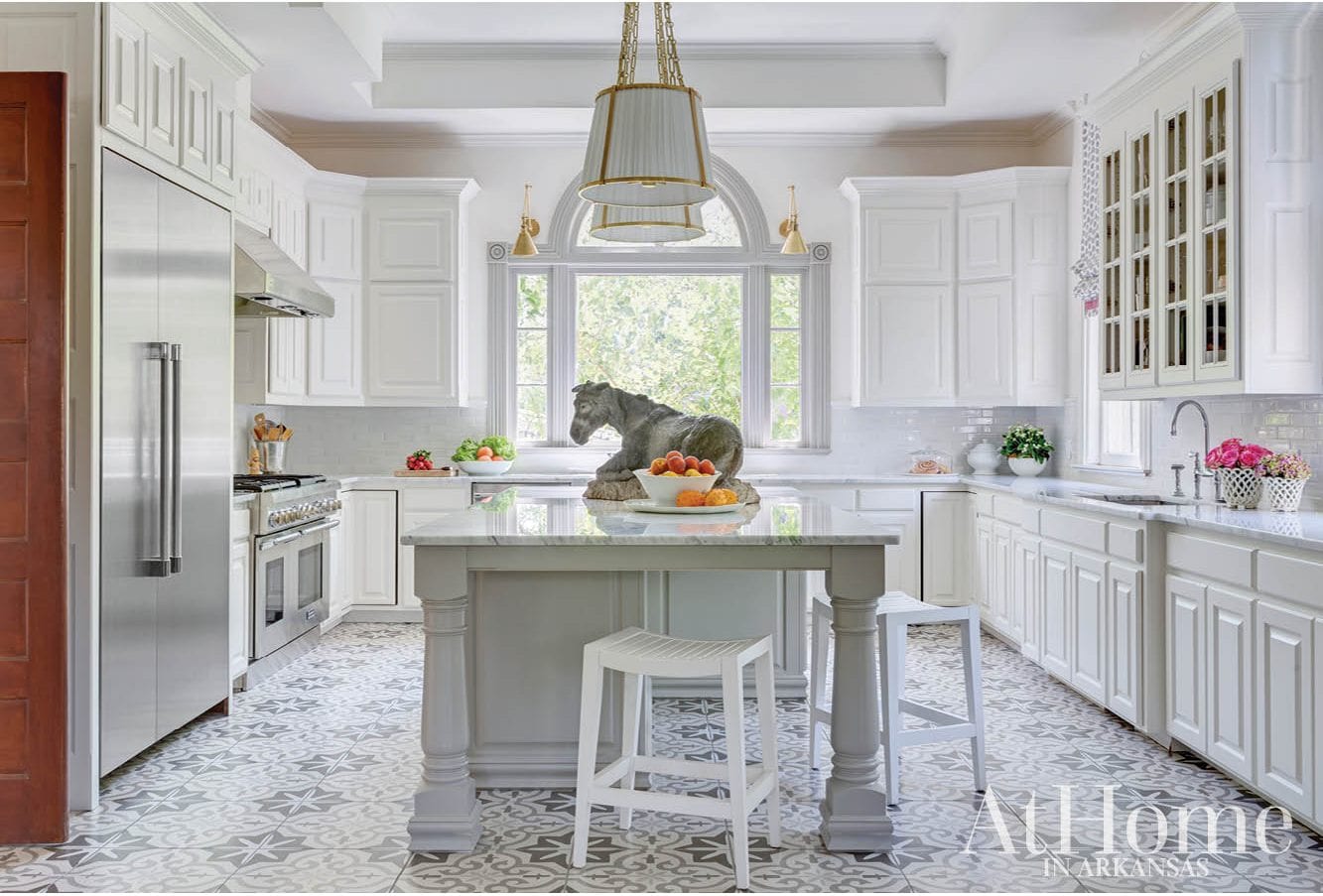 Modern Renovation
The only structural change Jeremy made to the home’s layout was to remove a peninsula of upper and lower cabinets that divided the kitchen and an adjoining den, thus opening up those two rooms. In terms of function, the designer had a second sink added to the perimeter and built a larger island, both features that come in handy when entertaining. A playful tile underfoot, Ralph Lauren pendants with pleated shades over the island, and pops of pink give the rooms an updated, youthful feel. 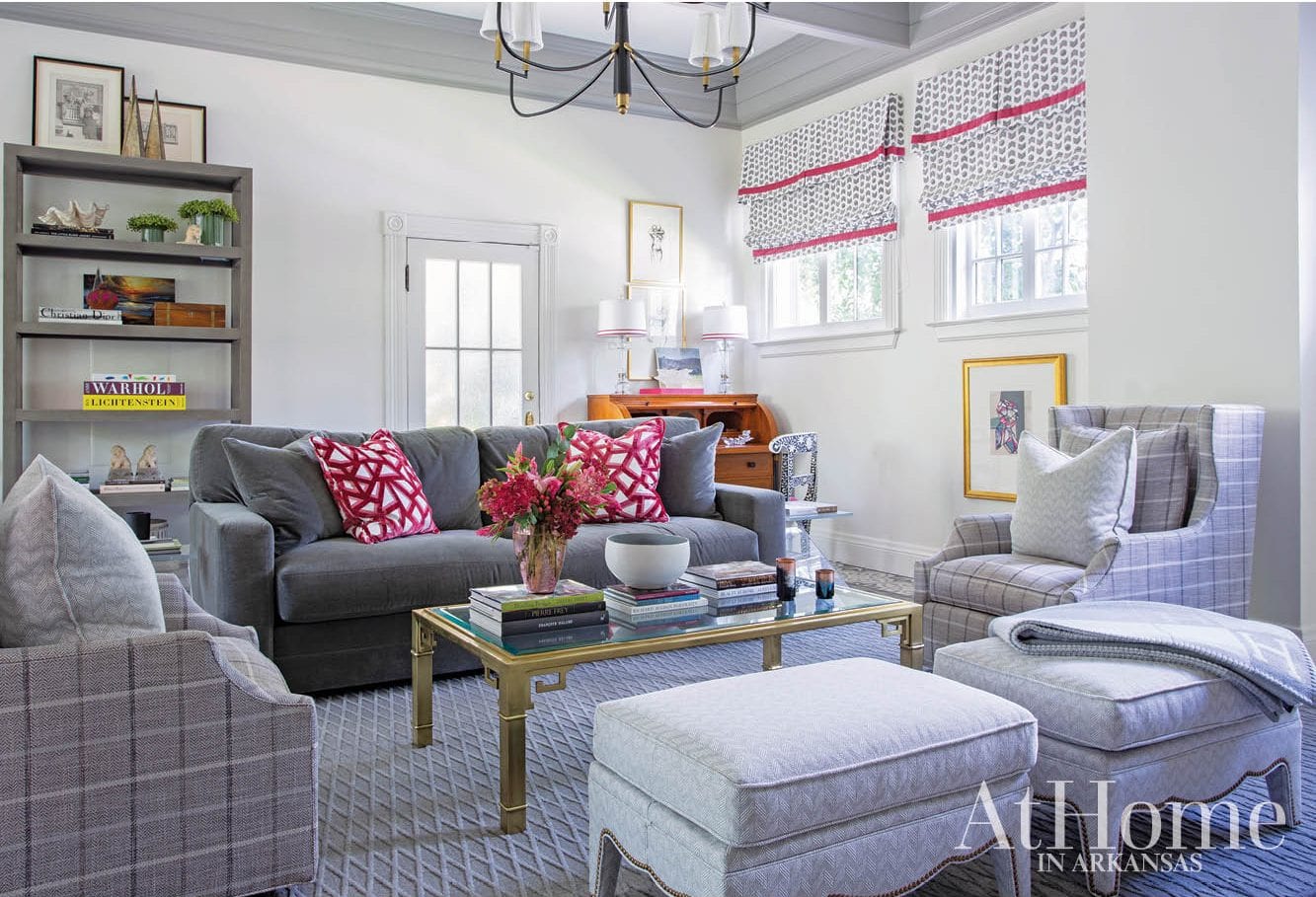 “You don’t have to ask permission from a client when it’s your own house, but there’s kind of a burden to that, too. You have to make the decision.” —Jeremy Carter 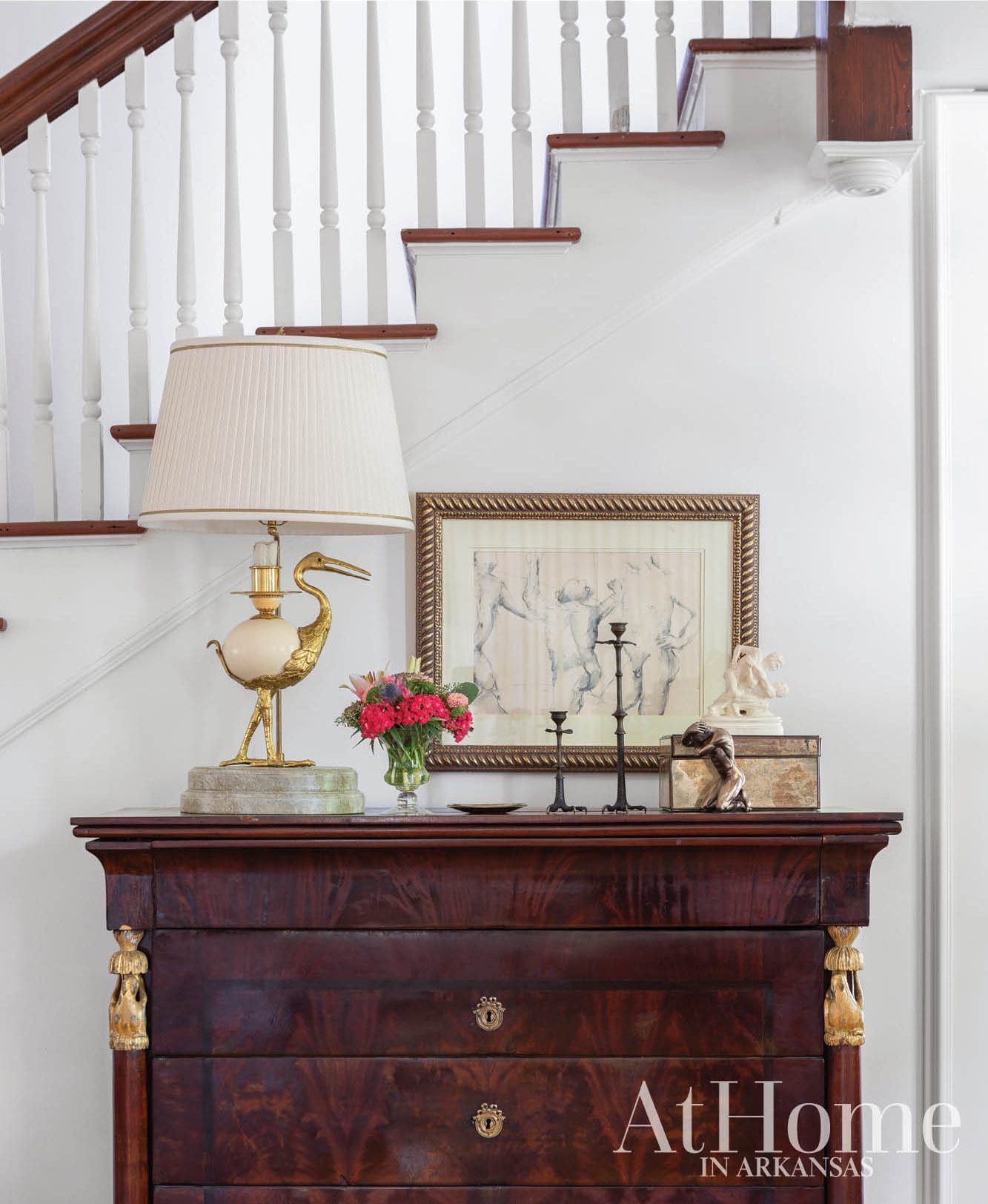 First Impression
“It’s all about the juxtaposition,” Jeremy says, pointing to the varied time periods represented in his foyer while explaining the history behind the room’s unusual scale: It used to be a second living room. During the home’s 1924 renovation, the front door was moved from the formal living room to its current location, making this large, airy expanse the new foyer. 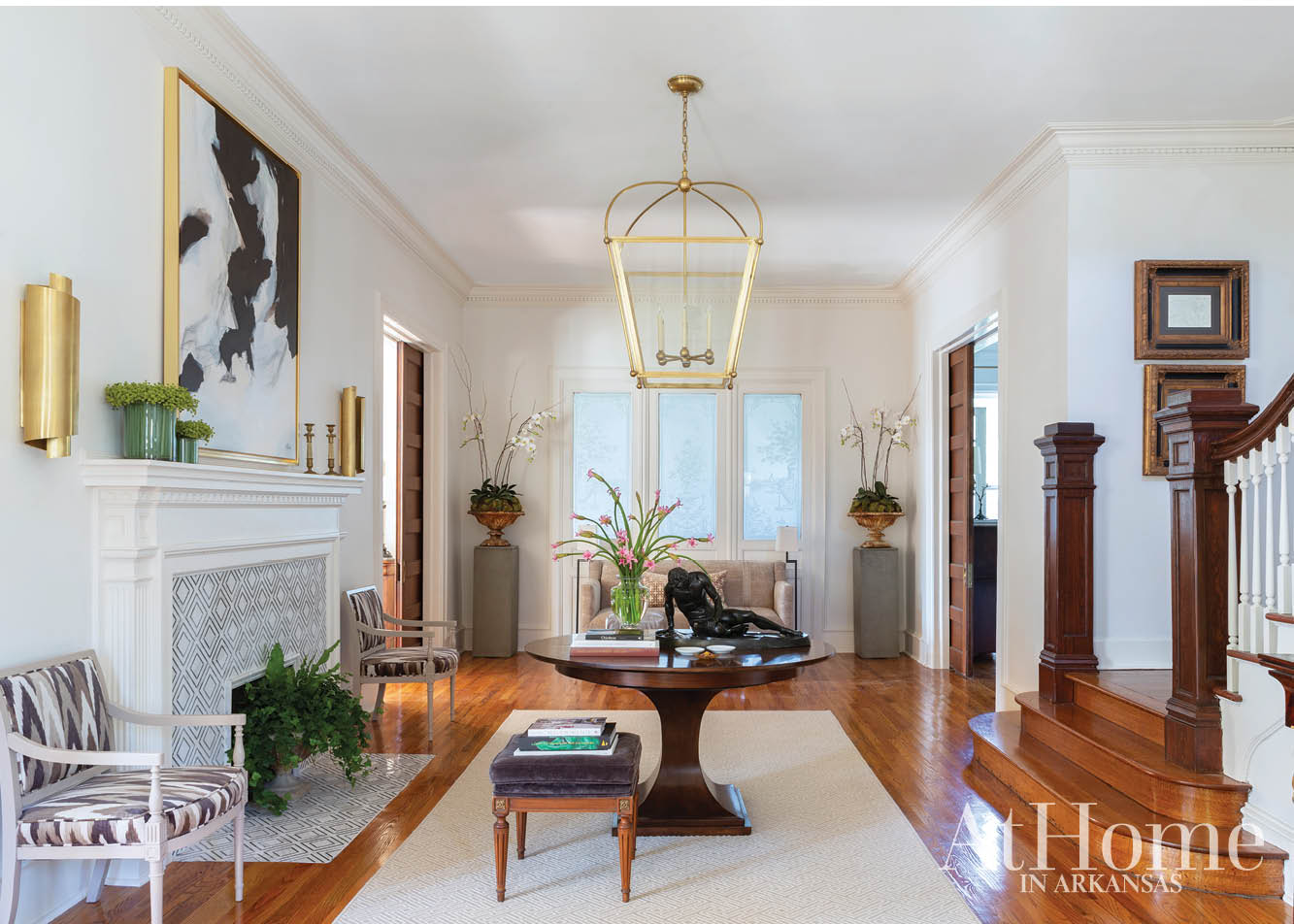 An abstract painting by fellow local designer Joshua Plumlee hanging over the foyer fireplace sets the tone from the second you step foot in the front door. 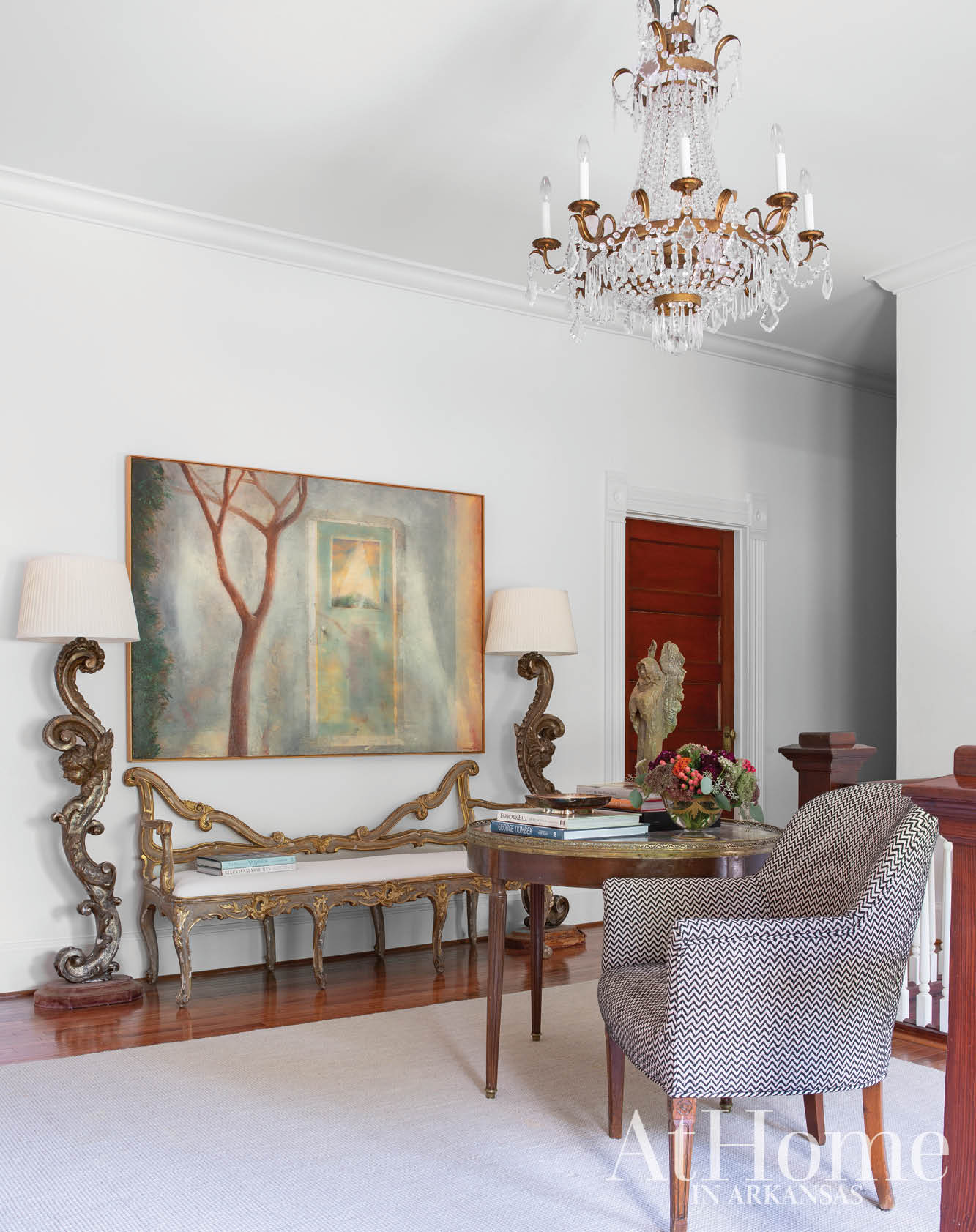 A landing at the top of the stairs outside the master bedroom is what Jeremy refers to as “the gallery” because it plays host to more of his art and collections. The chandelier is original to the house. 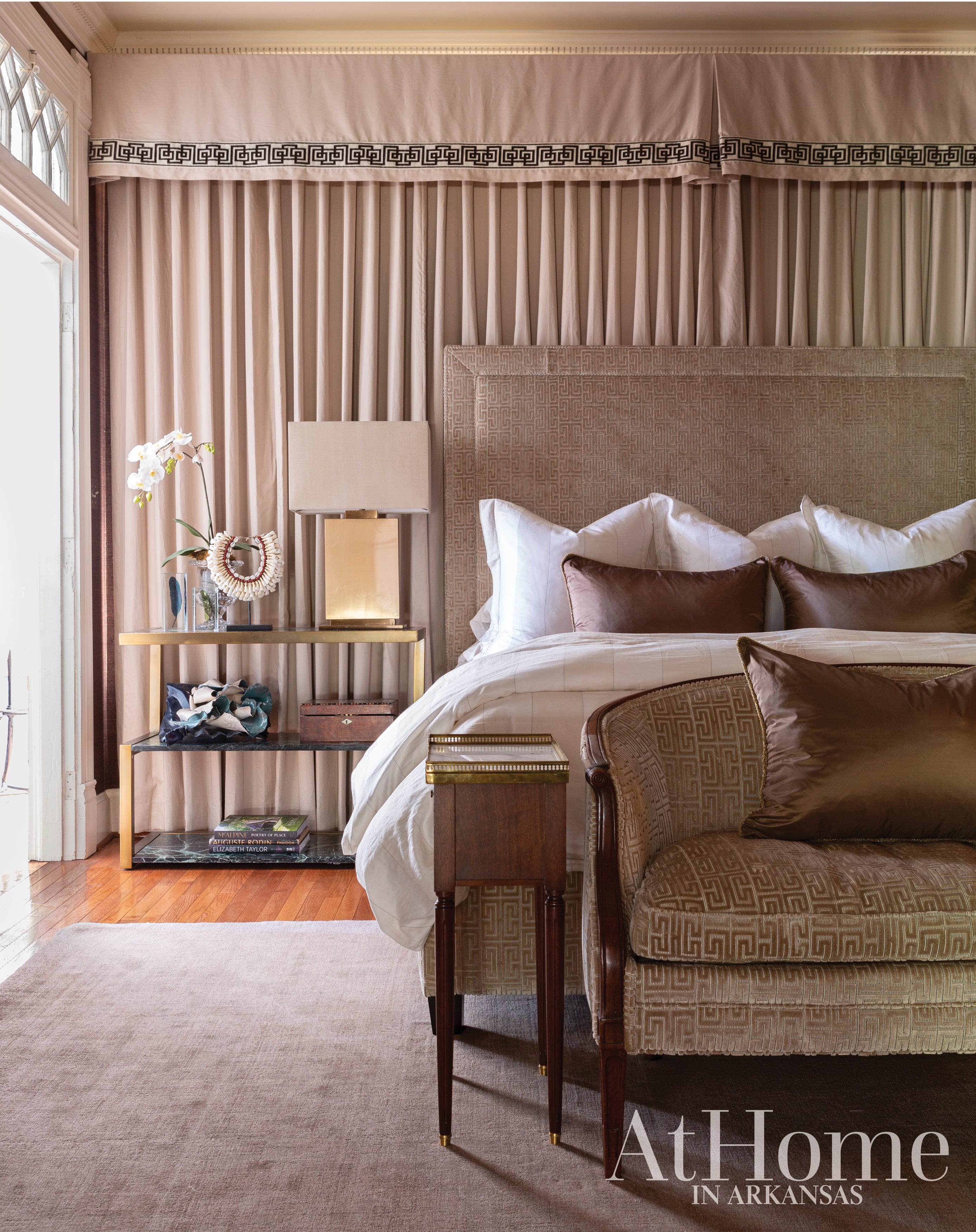 Master Inspiration
Jeremy’s inspiration for the master bedroom started with a fabric he found at Cynthia East Fabrics. “I bought all of it they had, then I had David Peterson build the bed using it and recovered a settee I already had in the same fabric,” he says. “Then I was flipping through a book of wallcoverings one night and came across this grasscloth, and it kind of all fell into place.” He installed drapes behind the bed to cover two small windows and give the room a cave-like feel, but took the door off an adjoining sunroom so sunlight could still fill the room. A collection of sentimental art pieces and collected treasures is at his bedside. 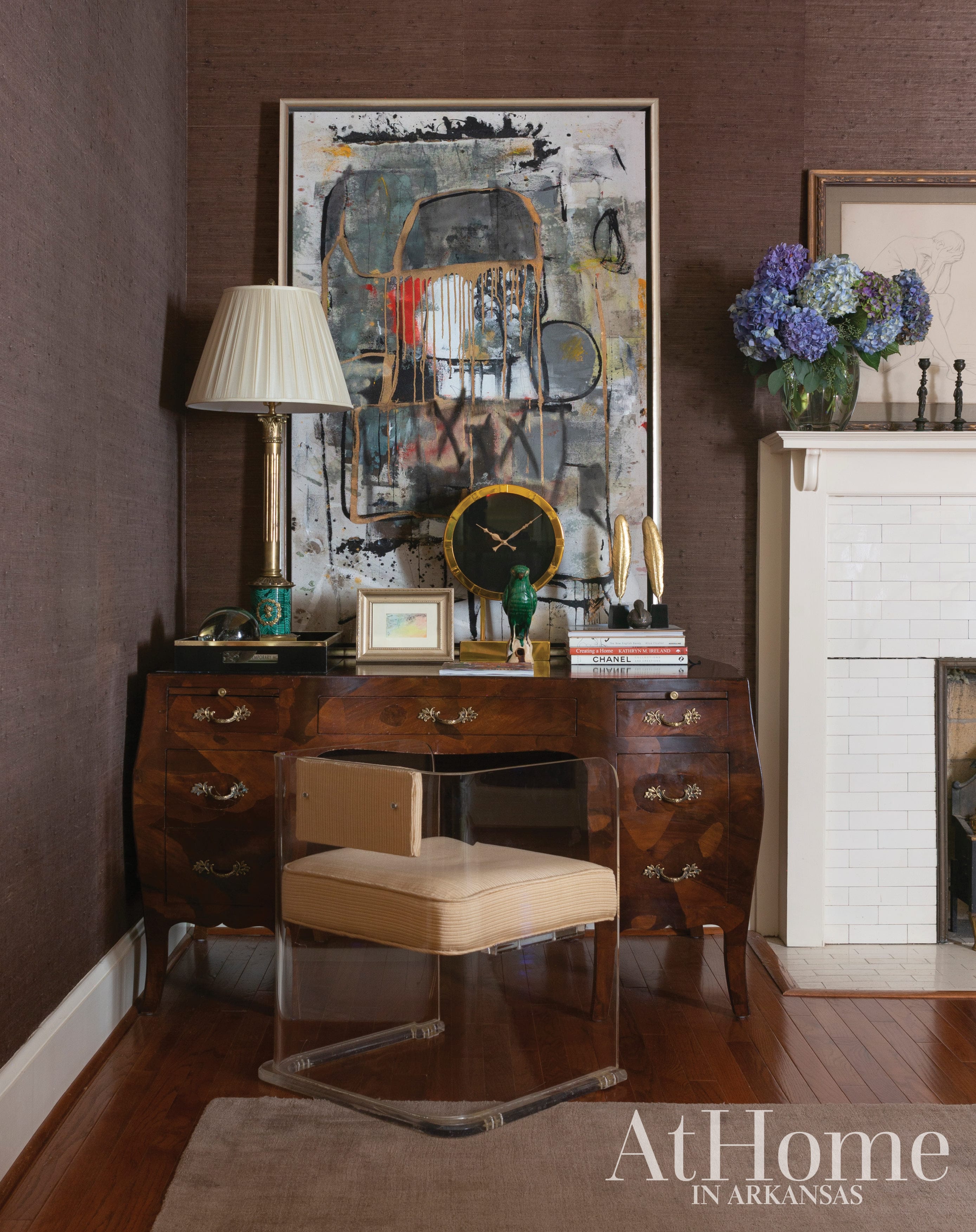 “The desk and the chair are an example of the mixture I like to do,” Jeremy says. “Even though it’s a French desk and it’s old, it still has a cleaner vibe with this chair.