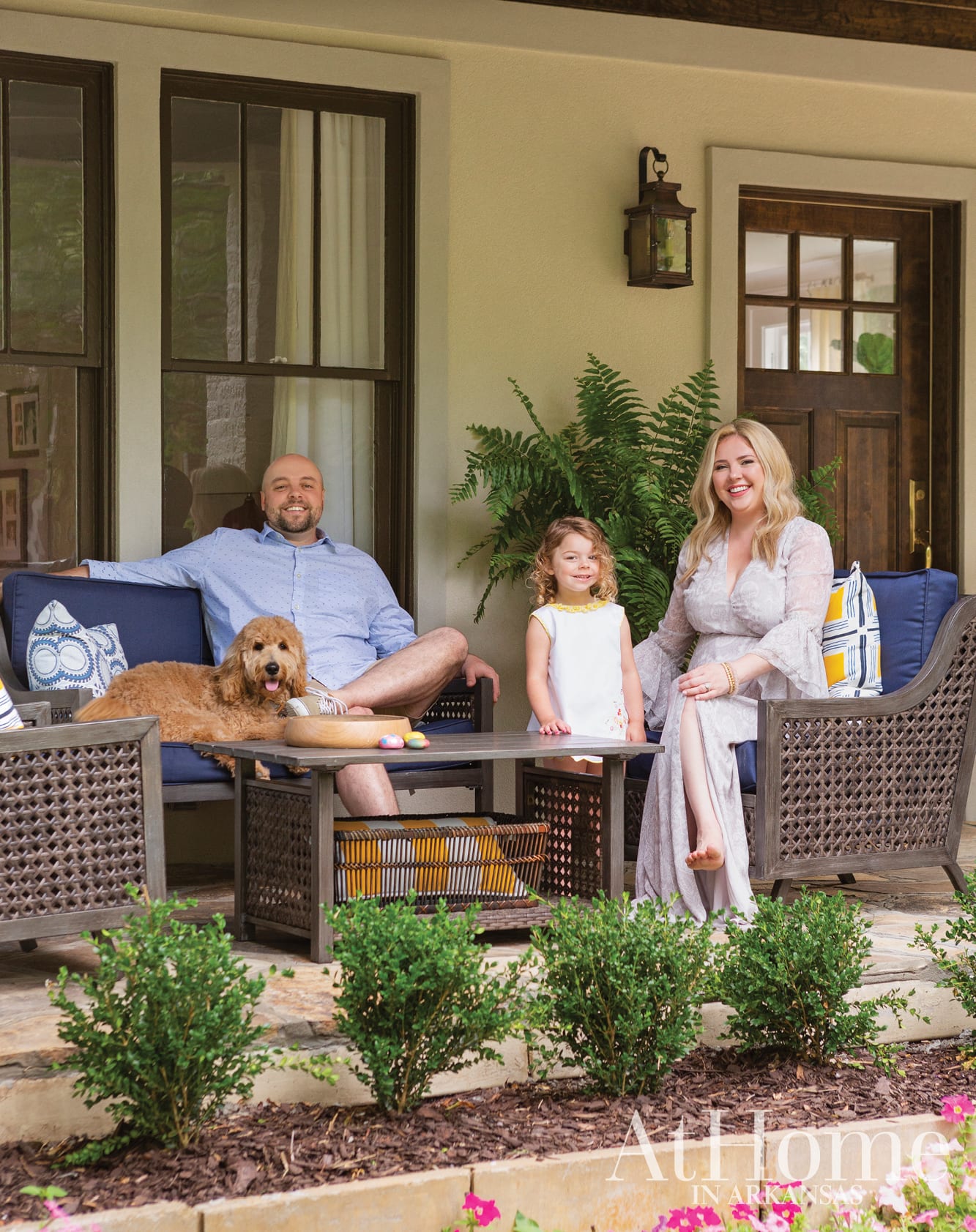 “It had really good bones, it just needed some love,” designer Stuart Thalheimer Davis says of the 1920s Heights cottage she helped homeowners Margaret and Jake King renovate. Jake puts it a little more bluntly. “It was not inhabitable,” he laughs. Luckily, both he and his wife have a passion for houses—he’s a home inspector and owner of Vantage Point Inspections while Margaret is a real estate agent with her family-owned business, The Janet Jones Company. “Since we both go into houses every day as a part of our jobs, we knew what we wanted,” Margaret says. Attracted to a location within walking distance of Margaret’s family, they set to work drawing up plans to turn the fixer-upper into their dream home.

To this point, the entire home—both inside and out—came down to the studs. Walls that formerly separated the living room, dining room, and kitchen were removed to create one space that begins at the front door. The couple’s previous home in Jake’s native Heber Springs had an open-concept floor plan and they wanted to recreate this here. “You have to keep your space picked up and the dishes clean, but it’s so nice for entertaining,” Margaret says.

The couple called on Stuart to help with both the space planning decisions as well as style selections. Inspired by a childhood split between the West Coast and Little Rock, Margaret describes her taste as a blend of bohemian and classic with an eccentric feel. “Overall, they wanted it to be comfortable and casual, but still have some formal aspects, which you can see in the light fixtures and accessories,” Stuart says of the design game plan.

Creating an environment that encouraged the family of three to spend their time together was another priority. “With our daughter, Vivienne, being an only child, it’s important to me that she’s right in the mix of things,” Margaret says. Spaces such as the playroom, located adjacent to the kitchen and the family room, encourage this. “I just feel so lucky that we got to do this renovation,” Margaret says. “For the first time, I feel settled and at peace now that we have our little nest.” 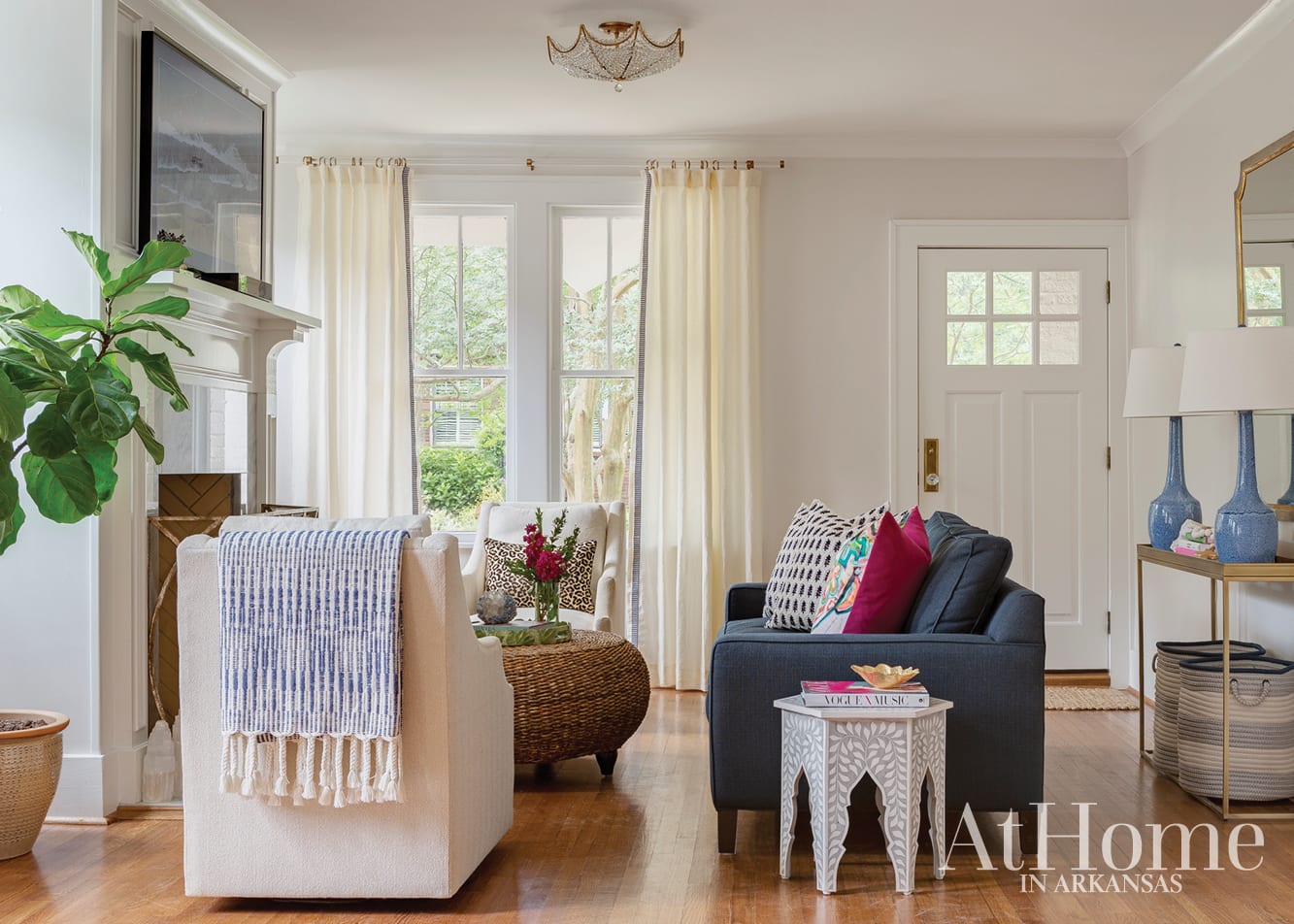 Perfect Pairings
“Margaret is a little bohemian and a little fancy when it comes to her style, and Jake is very outdoorsy,” Stuart says. To this end, the designer mixed traditional with modern and casual with formal to be a true reflection of the couple. “When I found the coffee table, Margaret said it looked like one her family had growing up, and its material reminded me of Jake’s love of nature, so I thought it was a perfect blend of their styles,” the designer adds. 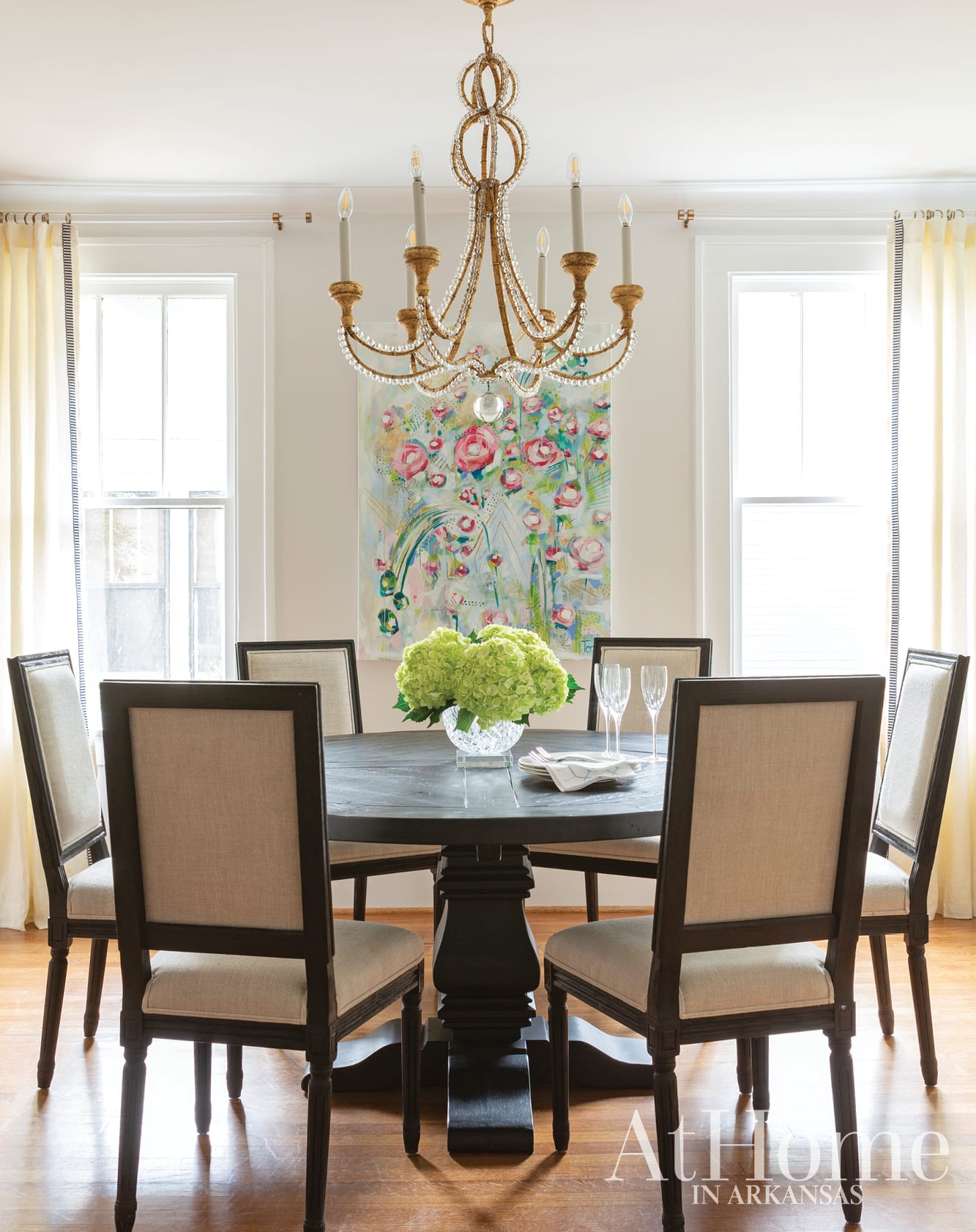 Around the Table
Located in between the living room and the kitchen, the dining room features a round table with enough room for six people to gather. Artwork by Charleston-based artist Tori Guglielmi brings color to the otherwise-neutral space and ties it to the vibrant chairs in the nearby kitchen seating area. Acrylic drapery rods and a crystal-embellished chandelier add sophistication. 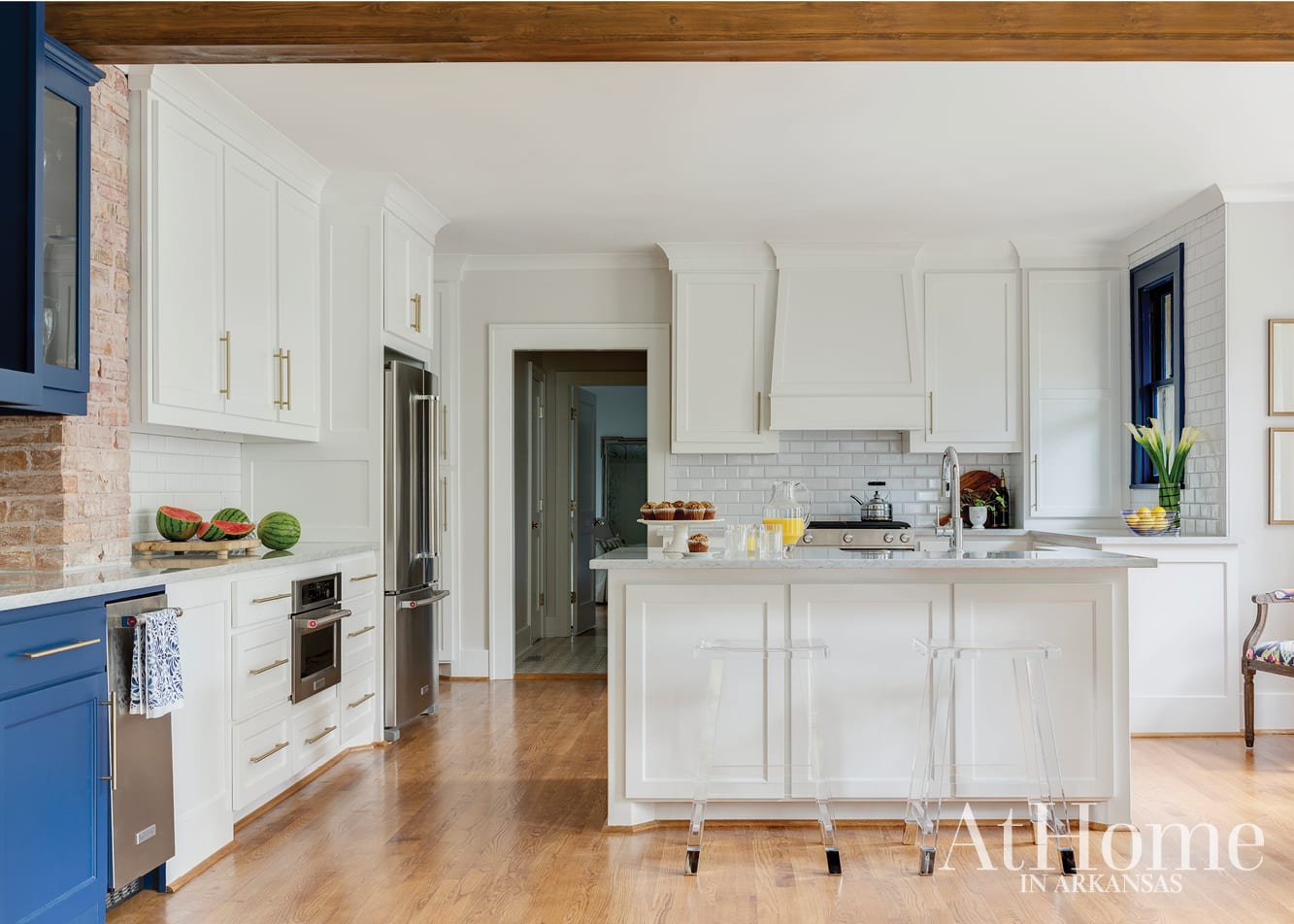 Cooking Up a Good Time
“We both love to cook, so a big island workspace was a must-have,” Margaret says of the centrally located prep area, which also has room to pull up barstools. From the front door, you have a clear line of vision through the living and dining spaces into the kitchen and its back wall, which houses the range and hood, a feature Stuart notes Jake wanted to stand out in the kitchen. Inspired by a seating area in her mother’s kitchen, Margaret set aside space for two comfortable chairs where guests can easily converse with the cook. “Jake went to Cynthia East one day and picked out the fabric for these, and it is spot on,” Stuart says of the vibrant covering. 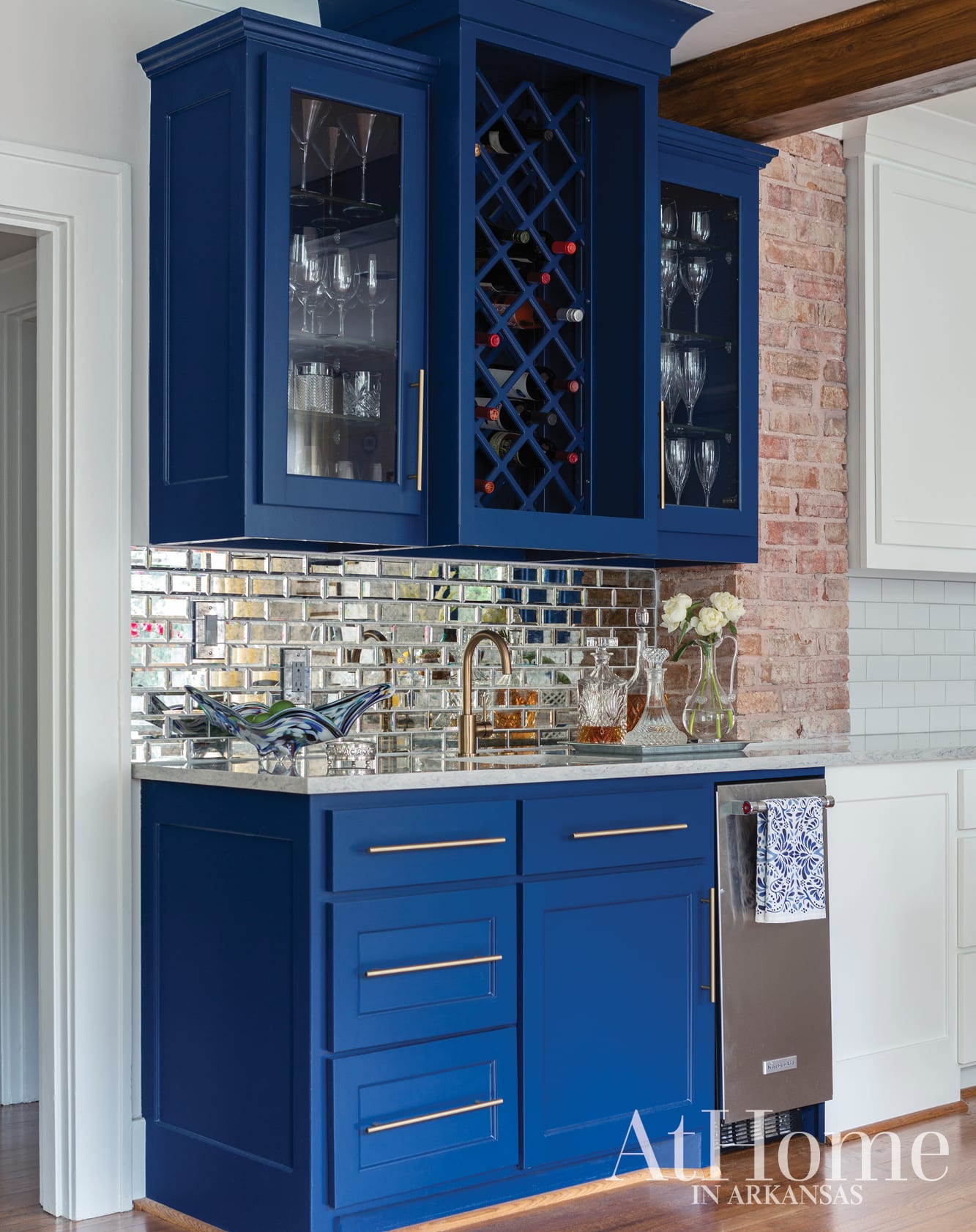 Thanks to the open-concept plan, many rooms in the home can be seen from one vantage point. Stuart connected them by using navy in multiple places, including the bar area, which was painted to look like a standalone piece of furniture. An antique-mirrored backsplash and a hammered gold sink add polish.

“For the first time, I feel settled and at peace now that we have our little nest.”
— Margaret King, homeowner 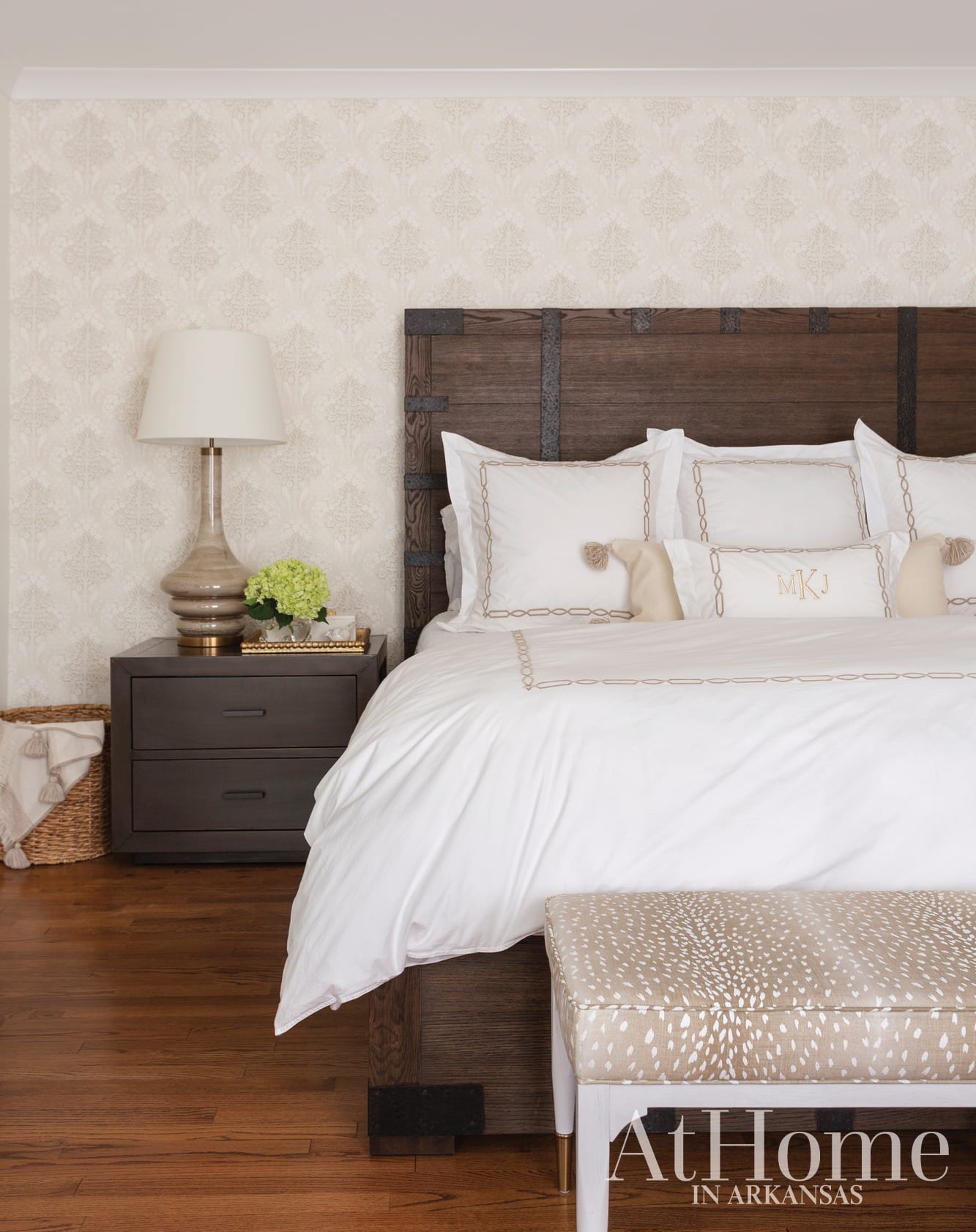 His Meets Hers
The master bedroom is a graceful blend of Jake and Margaret’s styles. For example, Stuart notes the bed and nightstands were selected by Jake and have a more masculine feel, while softer hues and an aviary-inspired scene on the wallpaper lend femininity. The designer maximized space in the master bath, giving the couple a walk-in shower, his-and-her vanities, and a separate water closet. Neutral marbles create a serene, uninterrupted palette that makes the room feel more spacious than its footprint. 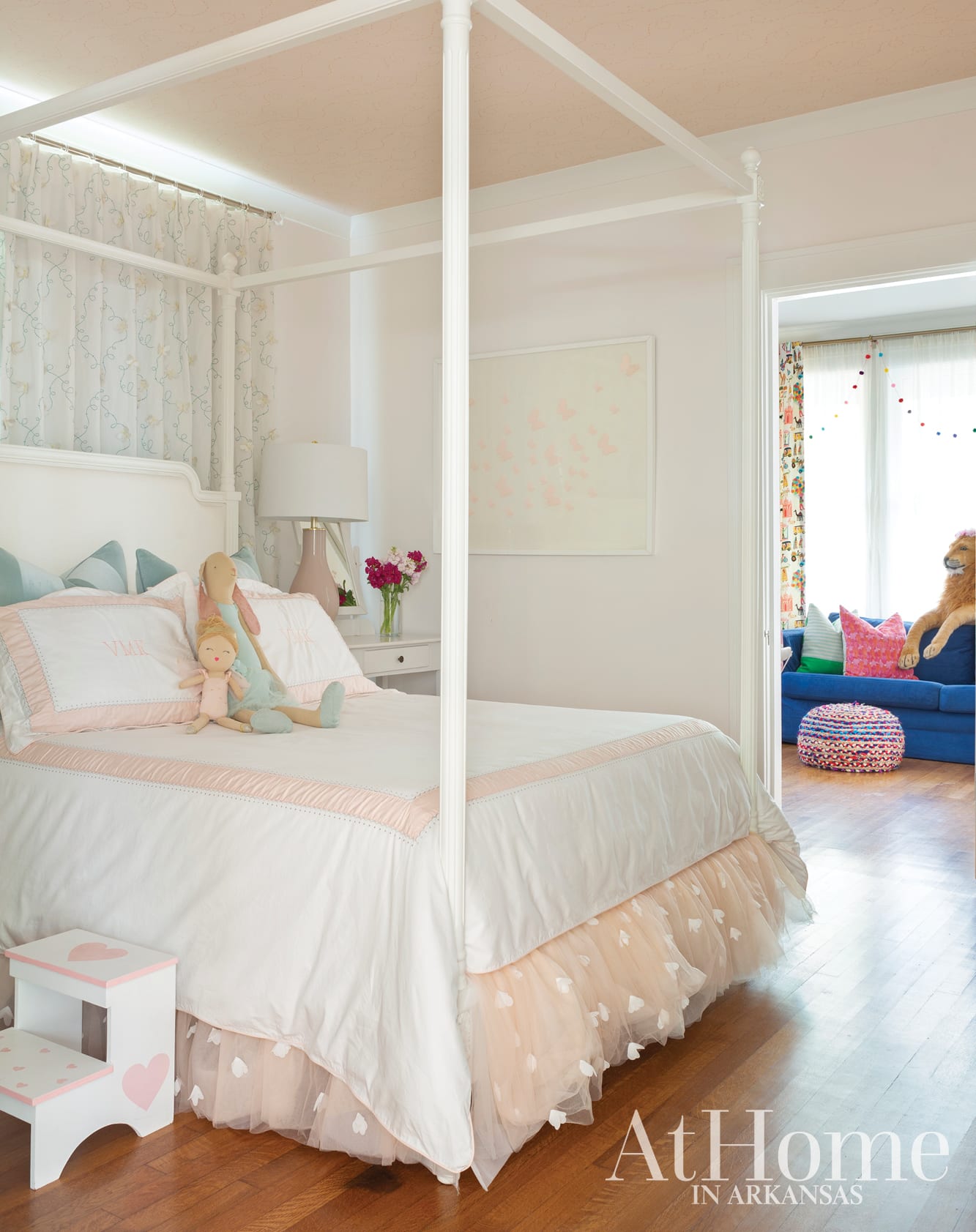 Give Me Butterflies
In the couple’s former home, Vivienne’s nursery had a butterfly theme, and they decided to carry this over to her big girl room. A light pink bed skirt with dancing butterflies and art featuring butterfly cutouts speak to this, while a wallpaper patterned with the trail of a butterfly’s fly path covers the ceiling. 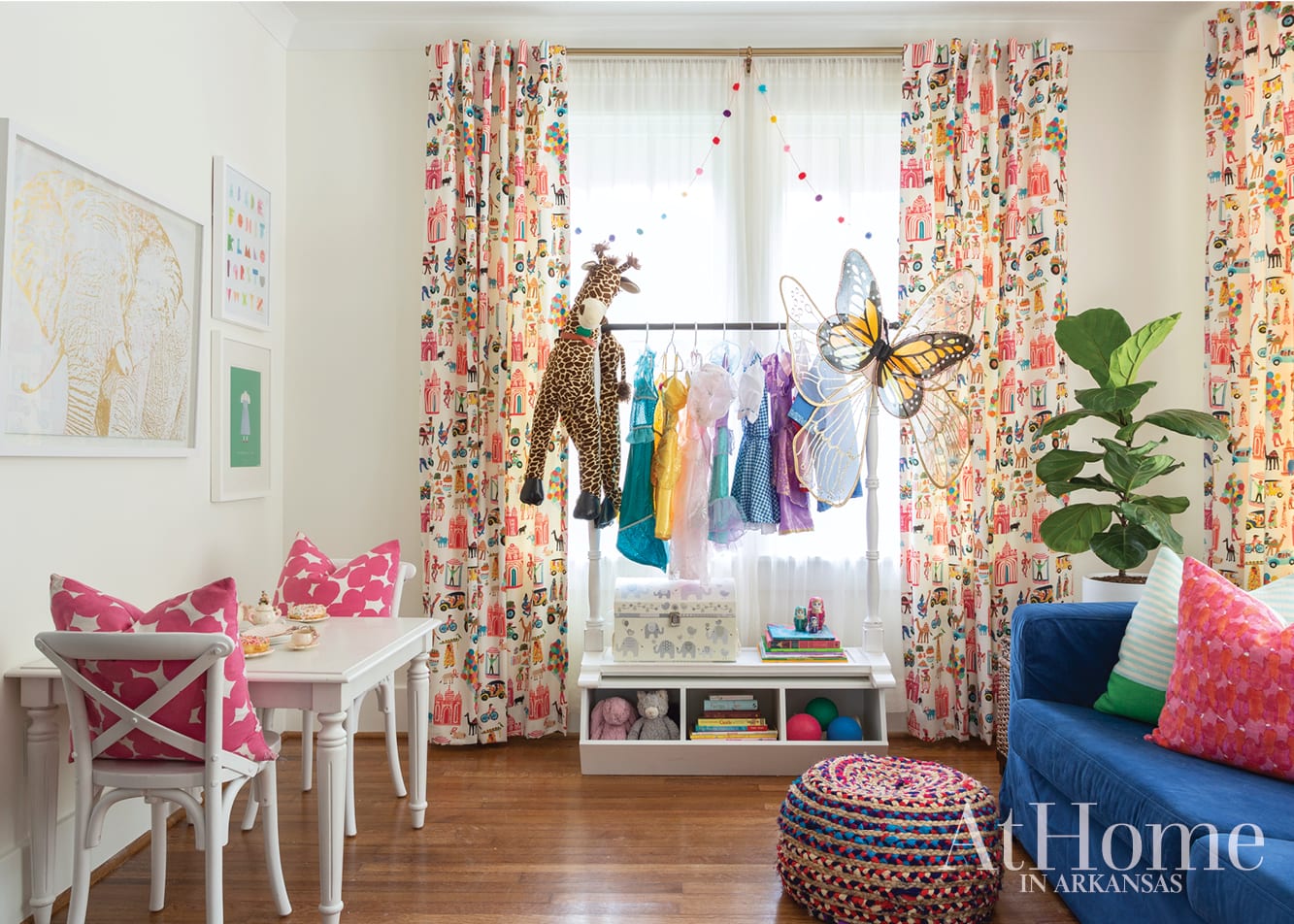 The Place to Play
“I love that the playroom is right off the kitchen, so I can keep an eye on Vivienne while I cook dinner,” Margaret says. Stuart worked with a navy couch the couple already had and selected extra-fun fabric for the curtains from VillaNova’s “Picturebook” collection. The couple plans to transition this space to a TV den as their daughter grows. “I was one of five kids, so we were always together and this space allows us to have that, too,” Margaret says. 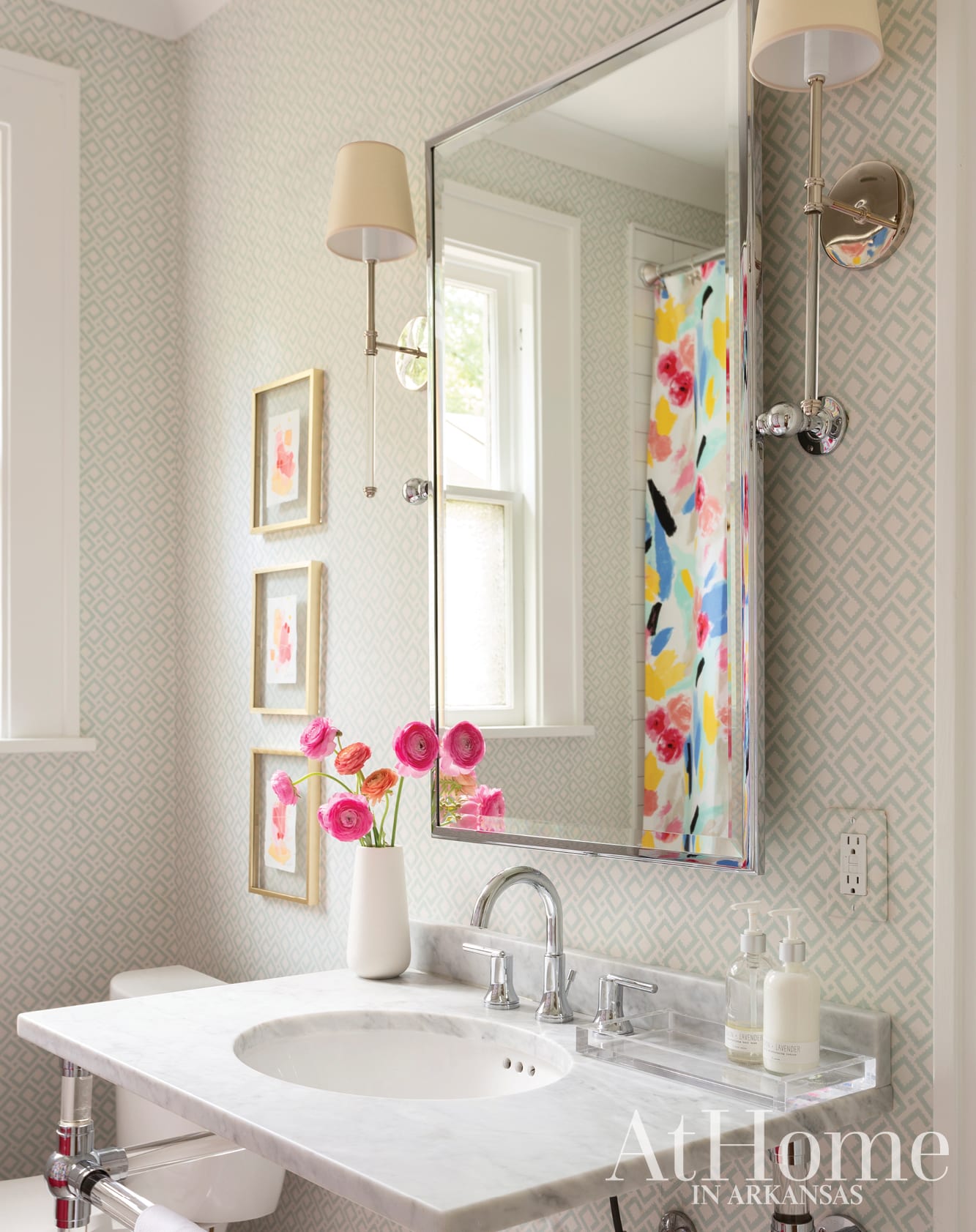 Colorful Character
A second bath is shared by guests and Vivienne. Stuart notes the light wallpaper “ties back to the home’s blue palette in a softer way.” This is paired with a vibrant ready-made shower curtain, which was customized to cover the full length of the bathtub by adding outdoor fabric to its bottom edge. “We wanted to keep the footprint in here and tried to choose pieces that would go with the original style of the home,” Margaret says. Down the hall, a guest room in a similar palette welcomes out-of-towners for overnight stays (below). 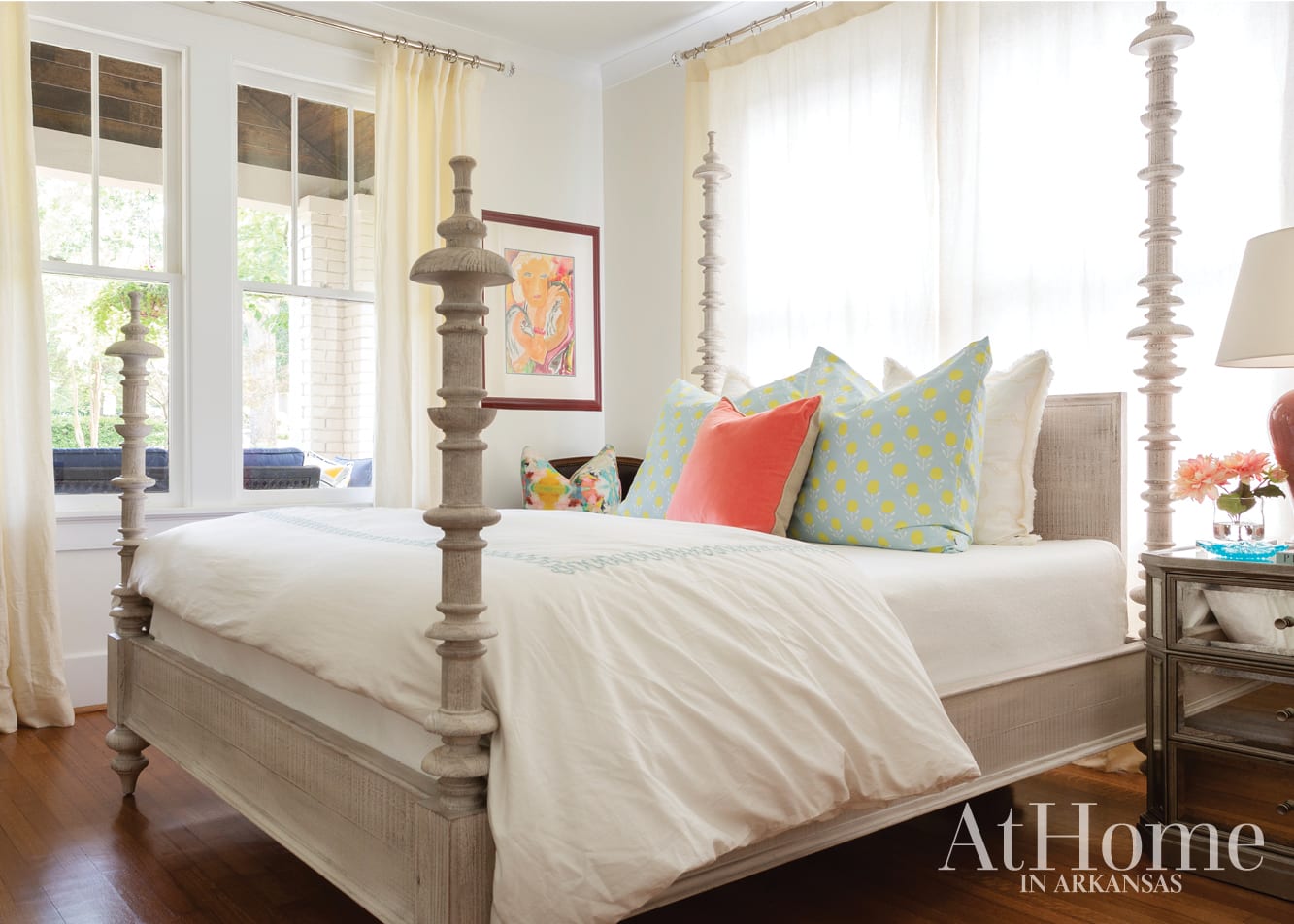 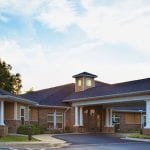