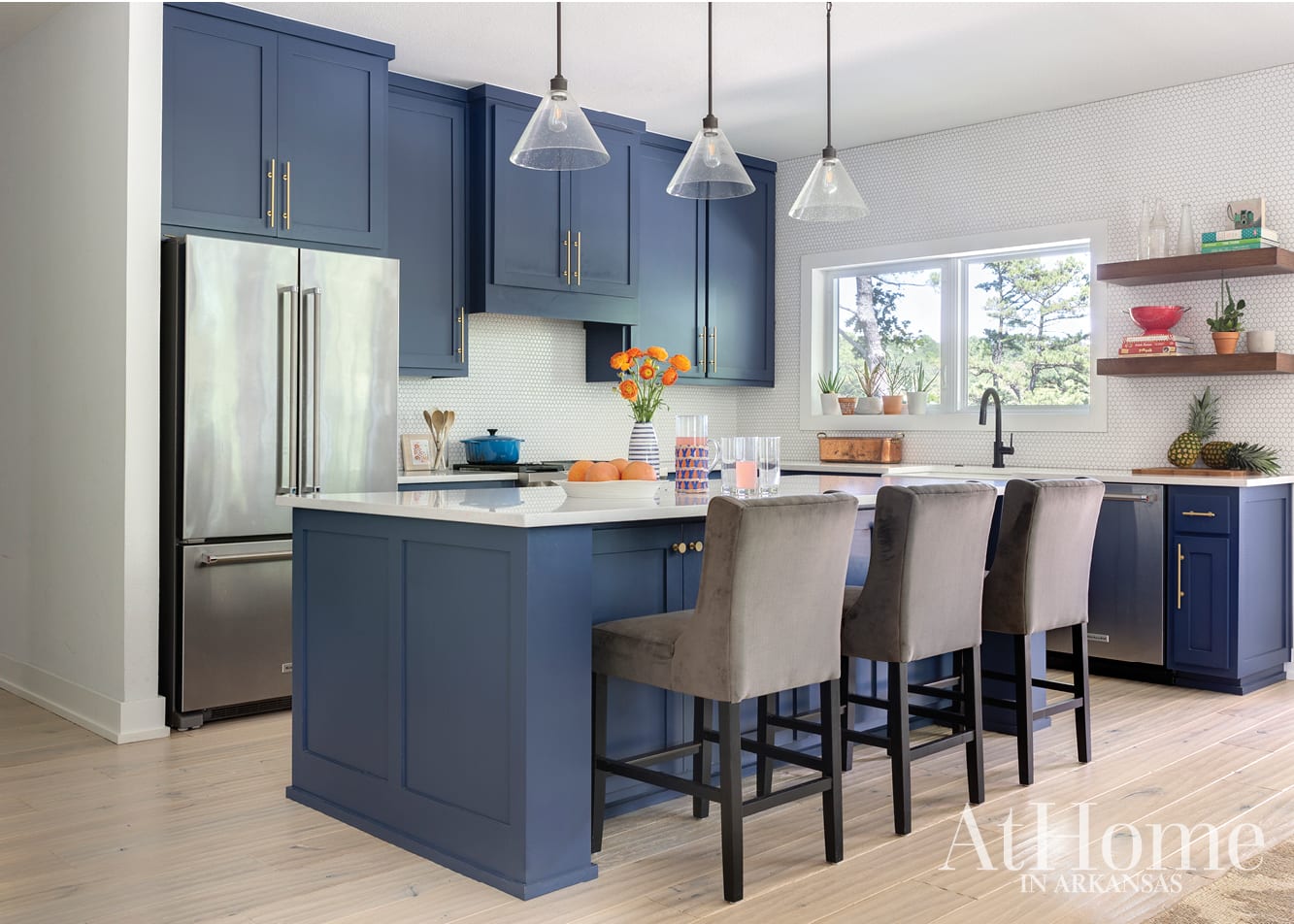 High above the waterline in an inlet of Beaver Lake is Paige Ray’s home, a place she has christened “Escalapia.” She credits her husband, Ryan, with introducing her to the word. “Escalapia was the name of one of the hill communities that existed outside of Rogers long before the lake existed,” Paige explains. Finding that the mystical-sounding word perfectly captured the eclectic feel she wanted her home to convey, she adopted it as the name of the house, an organic, open space filled with art and vintage finds that the two share with their 4-year-old son, Sam. 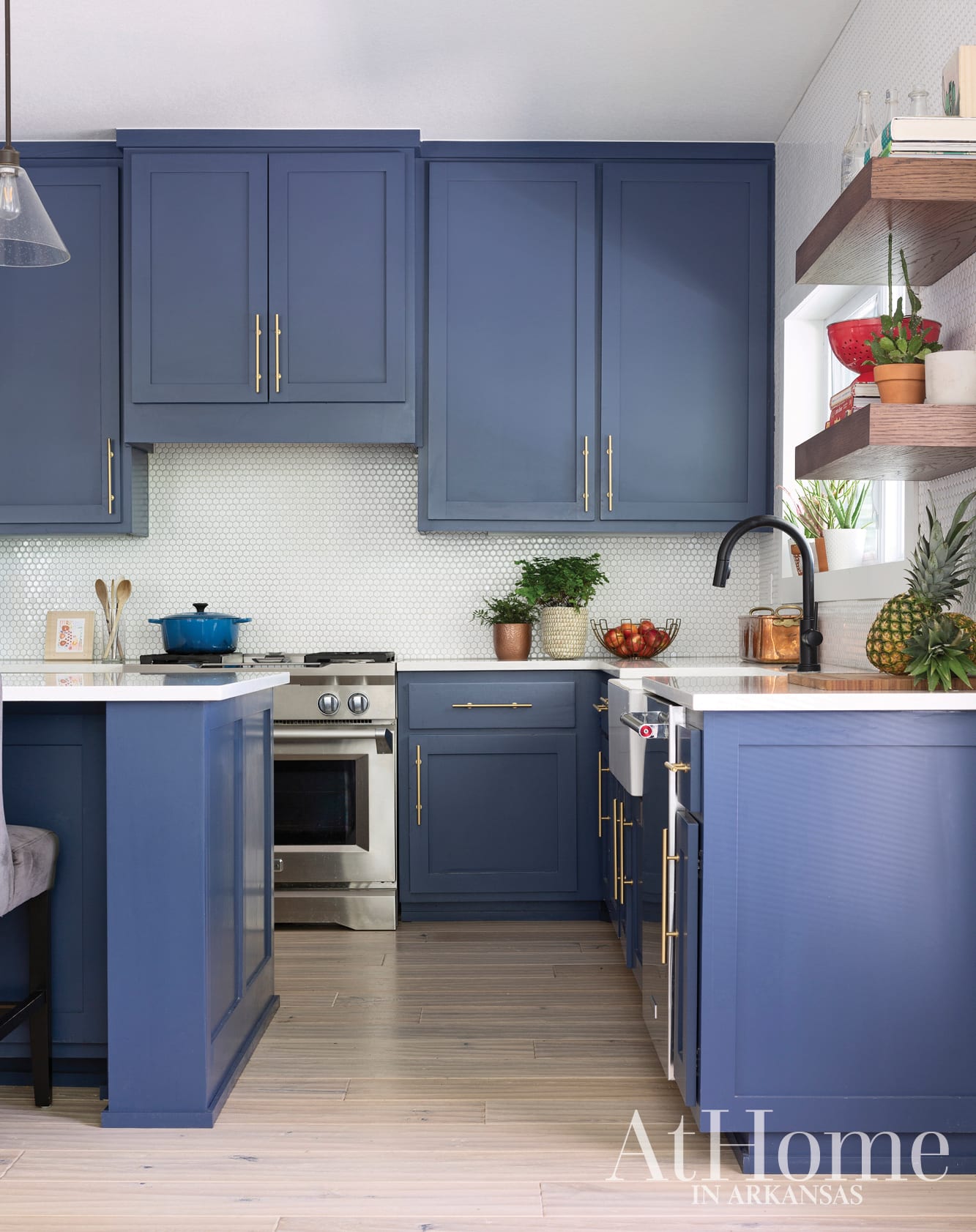 Paige and Ryan had looked at buying, but they couldn’t find anything on this area of the lake that suited their style. “Ryan grew up on the water, and I grew up in the country. We both wanted Sam to have the opportunity to grow up around the beauty of Arkansas,” Paige says. They brought Siloam Springs architect Matthias J. Pearson on board and Paige took on the task of choosing finishes for each room.

Central to the home is its navy blue kitchen, one of Ryan’s two requests for the home—the other being a single-slope roof. “Ryan was adamant that the house have a contemporary look and feel, and I had my mind wrapped around traditional,” Paige says. “Color was a big part of mixing the two. In the bathroom and kitchen, the color is a pretty traditional blue, and I used that as my neutral throughout the house, planning my other colors and textures around it.” They chose a white quartz countertop and small-scale white hexagonal tiles for the backsplash to contrast with the main hue, while mixed metals and wood tones warm up the space. “When I was deciding on finishes, I asked myself, Is this Escalapia? And if my inner designer said yes, I went with it,” Paige says. 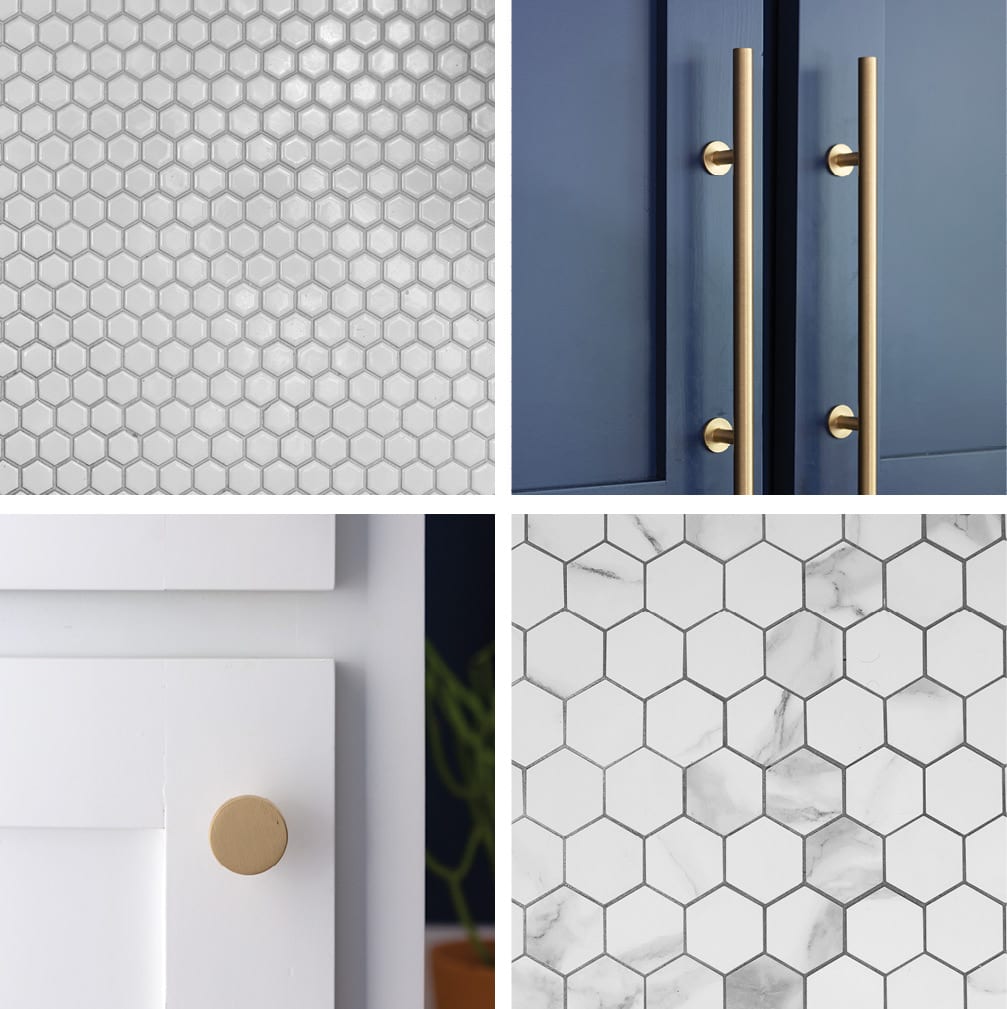 Geometric tiles and brass finishes lend a current feel to the kitchen and bath. 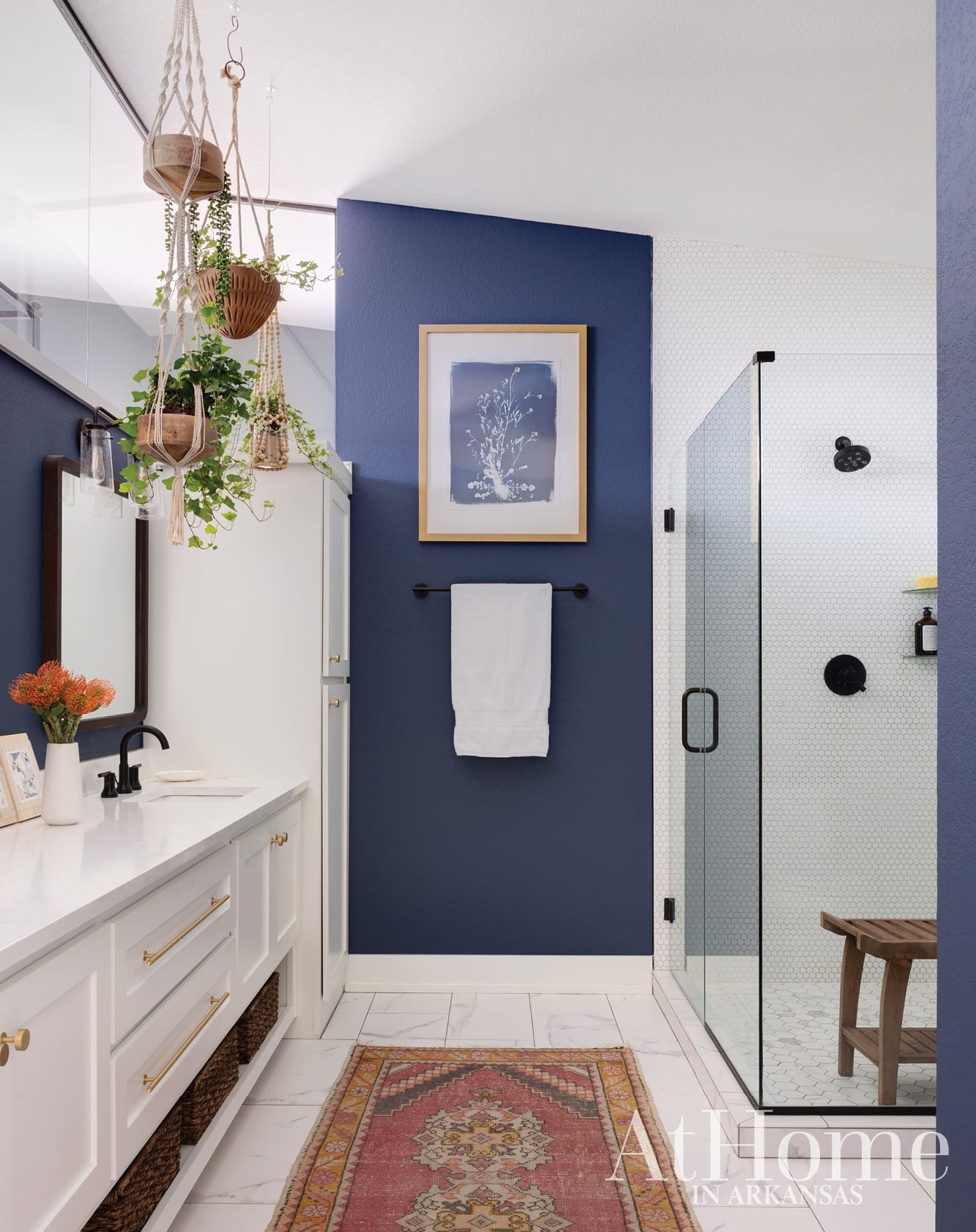 “I used blue as my neutral throughout the house, and I planned my other colors and textures around that.” — Paige Ray, homeowner

Navy and white continue into the master bath, where a large walk-in shower takes the place of a tub. Paige chose the same tiny hex tile as the kitchen backsplash for the shower wall, but larger marble styles for the flooring. Even though the room has no exterior walls, natural light from the bedroom fills the room thanks to a window over the vanities, a design detail Paige says is common in their architect’s work. “That feature is really fun, especially in the summer when you can take a shower by the light of the morning,” Paige says. 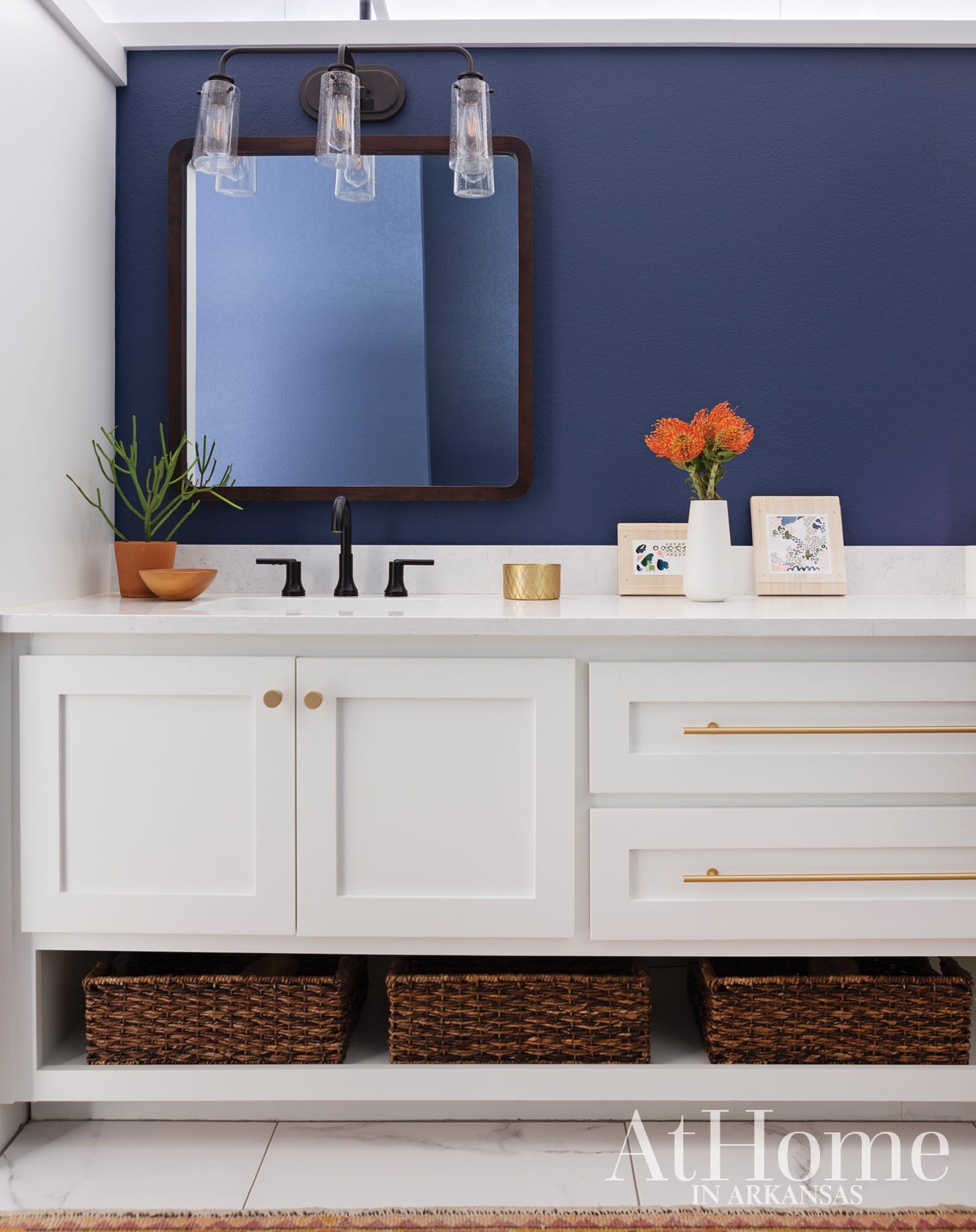