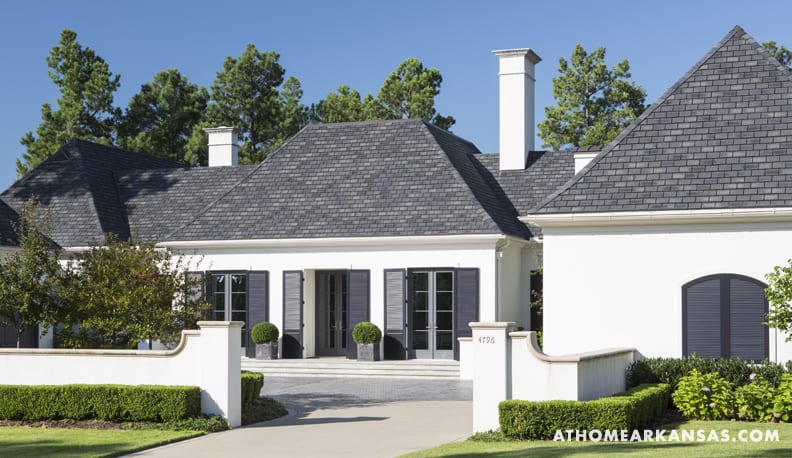 At Home in Arkansas: Your home is so pulled together, which hints at years of careful editing and accessorizing. We have to know: new build, or renovation?
Melissa Haynes: It’s a new build in Fayetteville’s Clear Creek neighborhood, but I love that you thought it might have been a renovation. One of the things that was really important to me in designing this house was to draw from the classics—French influence, Mediterranean design, British architecture—and create a house that was timeless and would age gracefully.

It would appear that you succeeded. How did you arrive at a classically inspired look that still feels fresh and fun?
I wanted it to be cool, light and airy. Adding height was a good way to accomplish that. The doors are nine-foot-tall French doors, which is something that you’d see in a home that was built a century ago. With the layout, we wanted there to be a flow, but not this newer conception of super-open spaces. Instead, we went for a series of smaller rooms and vignettes that flowed and worked off of each other. In older homes, you get that sort of purposeful appeal. 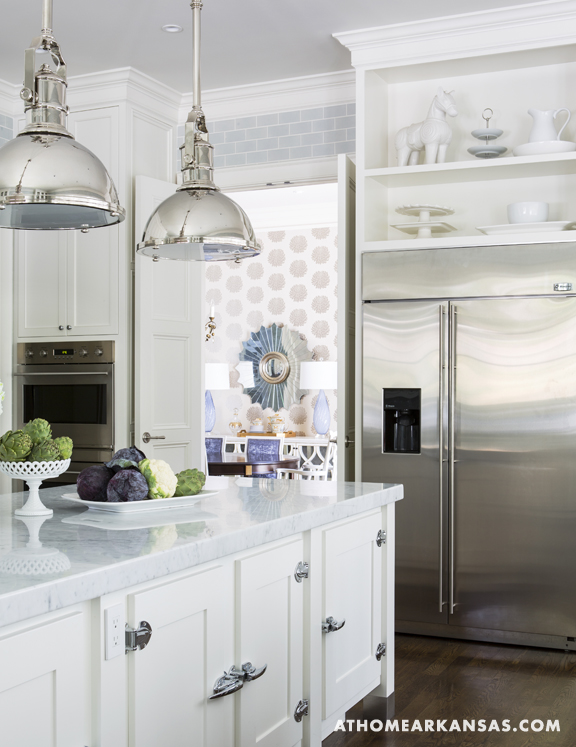 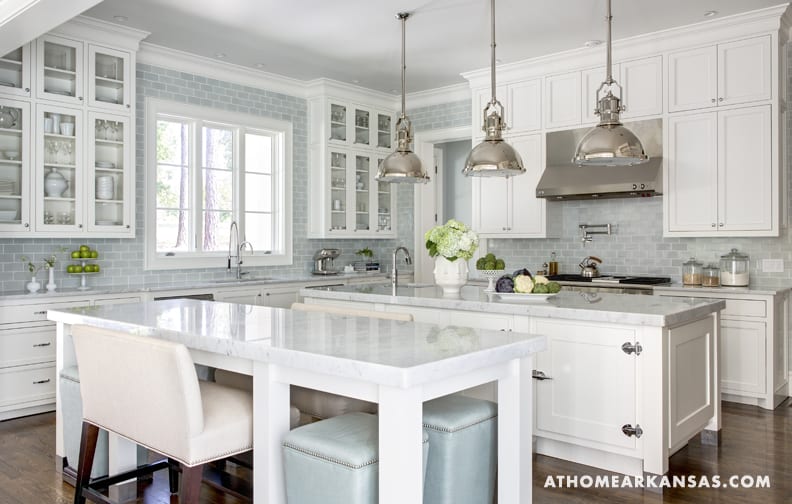 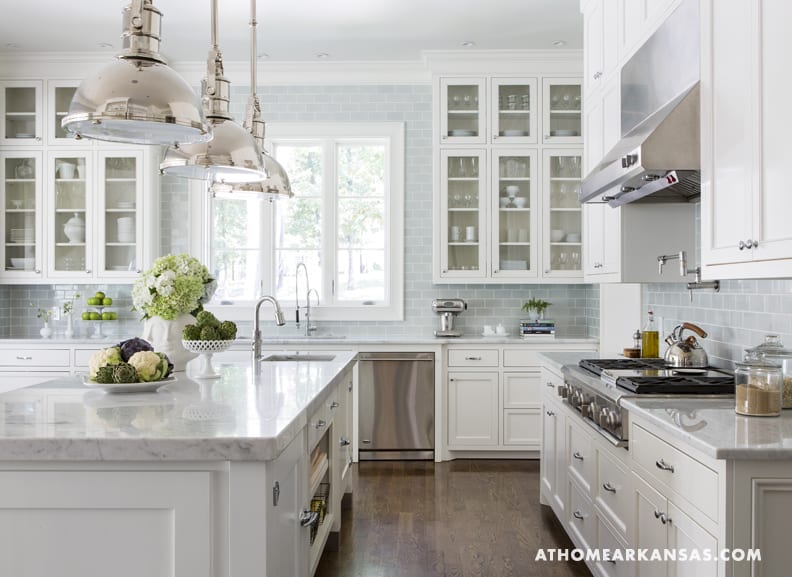 Was it difficult to achieve that feeling of “flow” when working with a more traditional floorplan? How did you ensure the design would carry over from room to room?
Rooms flow a lot better when they aren’t broken up by bold colors on the wall. We used off-white, grays and blues throughout the house; in the formal spaces we used a warmer cream, and in the more casual living spaces, an alabaster. In the bedrooms, however, we went with something a little more saturated. I think a bedroom can stand on its own, since you want to be enveloped in a soothing color that will stimulate your mood. In rooms that you’re constantly walking through, you want neutrals that will blend together seamlessly. 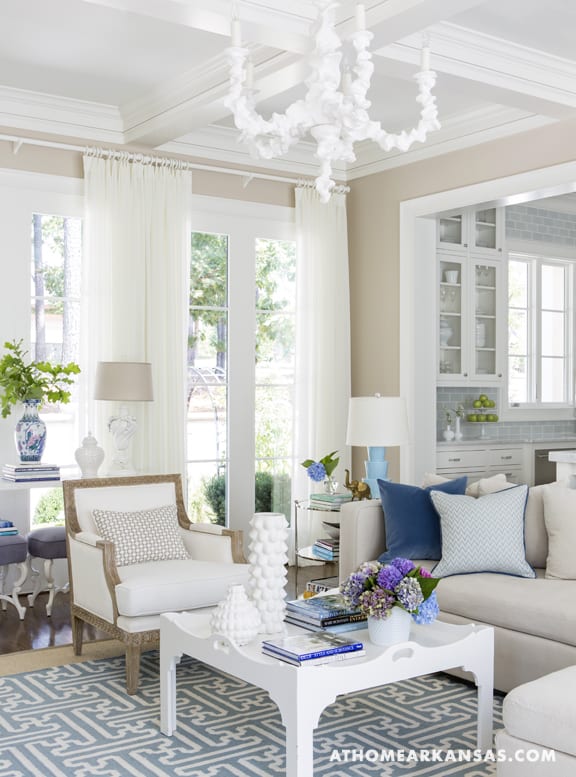 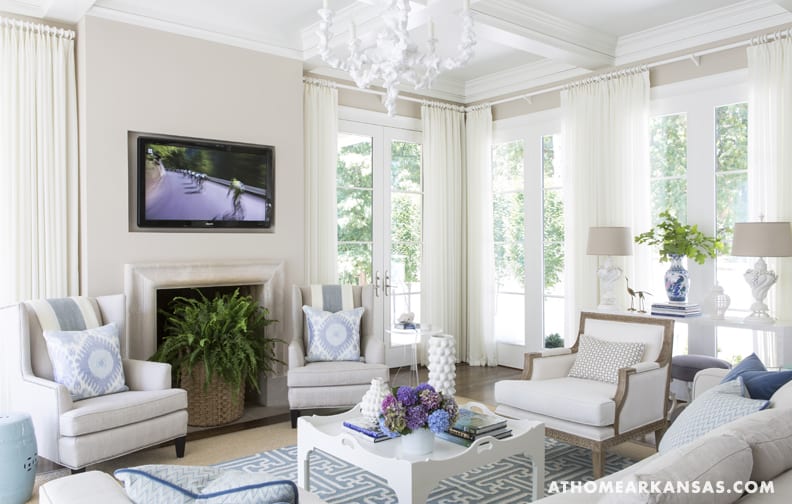 Even though you’ve used a lot of soft colors, your rooms pop with personality. Any tips for how readers can add a bit of their own personality to their spaces?
Character comes out in layers of pattern, color and texture. Some people might go more neutral if they are a little more reserved, and others might go full-on color. Either way, to make it work, it’s important to keep a mix in mind: modern with antiques, patterns with textures, neutrals with bolder colors. There’s a magical combination of these elements that can speak to your personality. Similarly, when you walk through a space, you should see your special things: an heirloom, a piece of art, something that reminds you of a moment with your family. Getting a collected look instead of that “back the truck up and deliver the furniture” feel is always what you want to achieve. You should relate to the things that are going into your home, period. 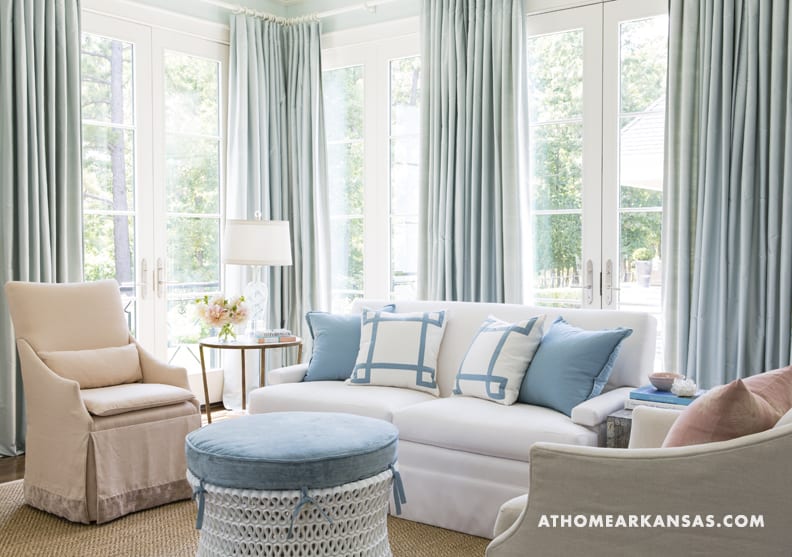 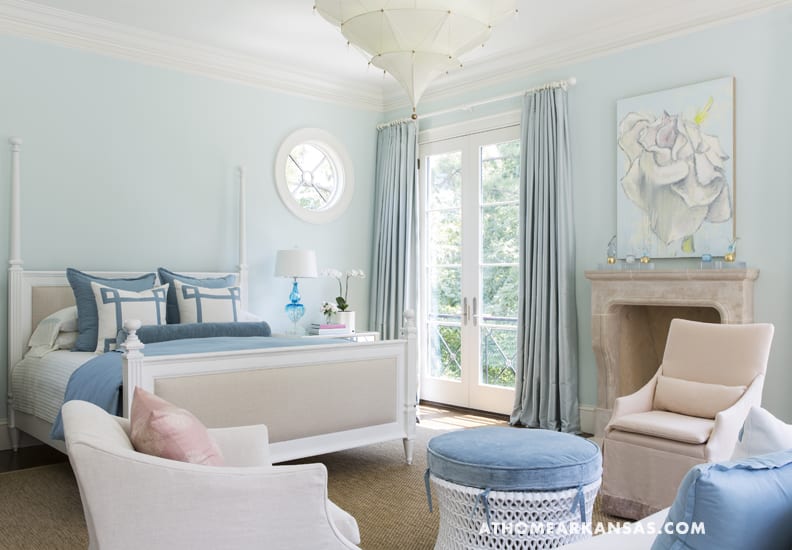 We couldn’t help but notice the interesting textural vignettes you created on the floor.
One of the ways to create flow from room to room is to use sisal rugs, and then add in pops of pattern with smaller accent pieces. Sisal rugs have that natural element, and they’re solid in color but provide great texture. If there’s a certain space in your home where you can get away with doing something a little bit different, I suggest layering over a sisal with an inexpensive rug that’s current or trendy. That gives you a pop of pattern and color, but it’s something you can easily change out. After all, it’s a rug, and you walk on it—no need to overly invest. 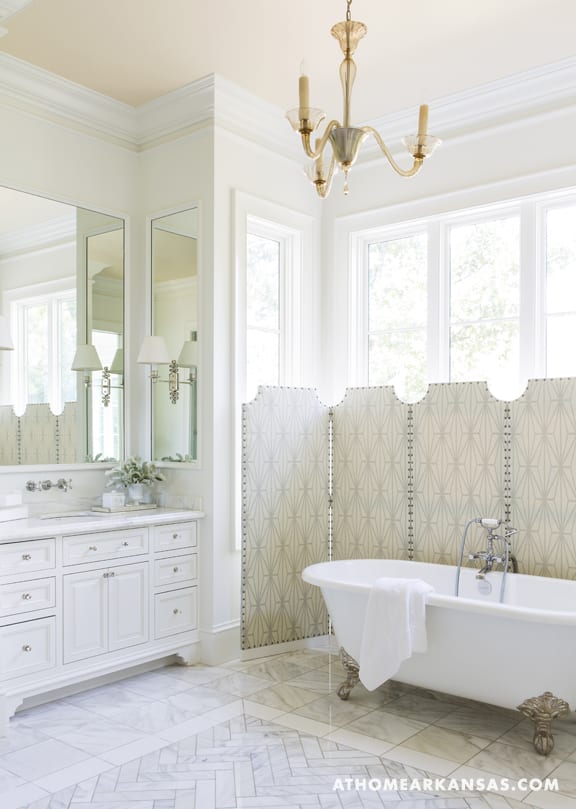 Speaking of texture and pattern, talk to us about the wallpaper you used in the dining room.
It’s a mix of modern and traditional, and is somewhat glamorous. It makes sense in a dining room because it’s not a space you use every day. It has a dressier feel and gives a lot of drama and impact to the space. 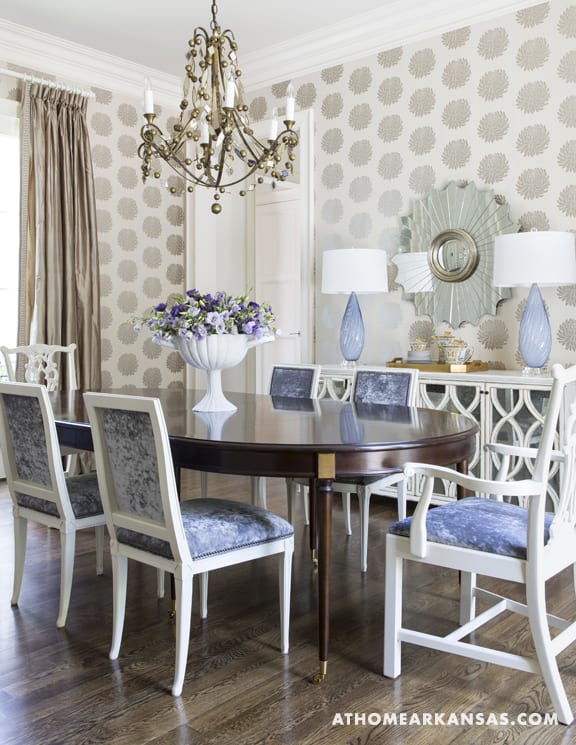 A lot of people are intimidated by wallpaper. How do you choose from all of the options?
Most importantly, it’s got to be something that you absolutely love, because it’s not something you’re going to change out frequently. If you’re somewhat shy, find a pattern that you’re really attracted to that is neutral in color, especially if you plan to use it in a larger space. In smaller spaces—places that you rarely enter into, such as a guest bath—you could choose something that’s a little funkier.

Apart from the lofty doors, there are a lot of architectural elements in your home that feel like they’ve been around for a while, for example the fireplaces. Did you bring in antiques?
They’re not antique, but they’ve been drawn from historical surrounds and were casted to look as if they were old marble or limestone. The boxes themselves are herringbone-bricked, and are larger in scale to draw the eye up. A lot of current fireplaces have a 24-inch box, but these are larger. They have that grand scale, but are also simplified. It’s so important to look back at history and pull elements from the classics. You can simplify and modernize, but maintaining that original integrity is important. 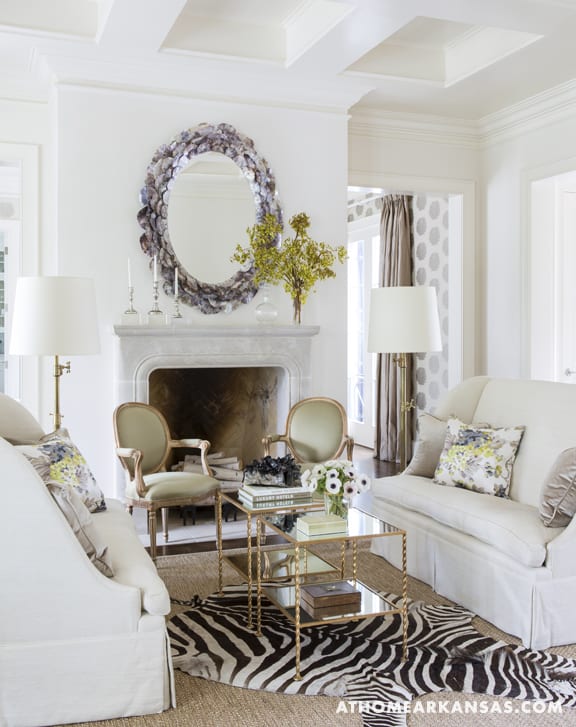 Your living room seems the perfect example of a traditional look that’s been modernized (Exhibit A: the Warhol print of Mick Jagger hanging next to antique brass sconces). Would you say that’s characteristic of your design sense?
My aesthetic for that room was really a mix of the things I love: Midcentury pieces, French antiques, Lucite, quartz and antique brass. The painting works in the space because it carries through on that “mod” theme. And yes, what makes a space interesting is a mix of old and new, classic and current, as well as traditional lines juxtaposed with modern elements. 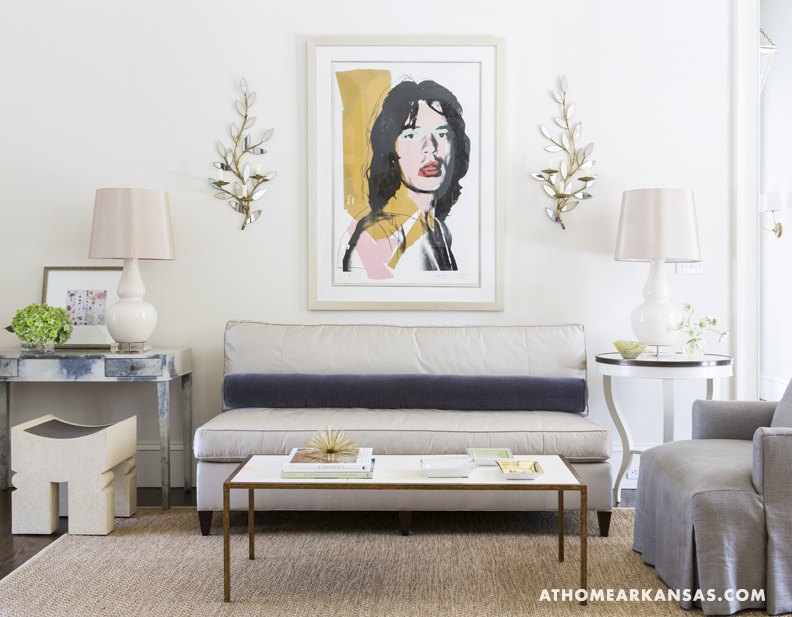 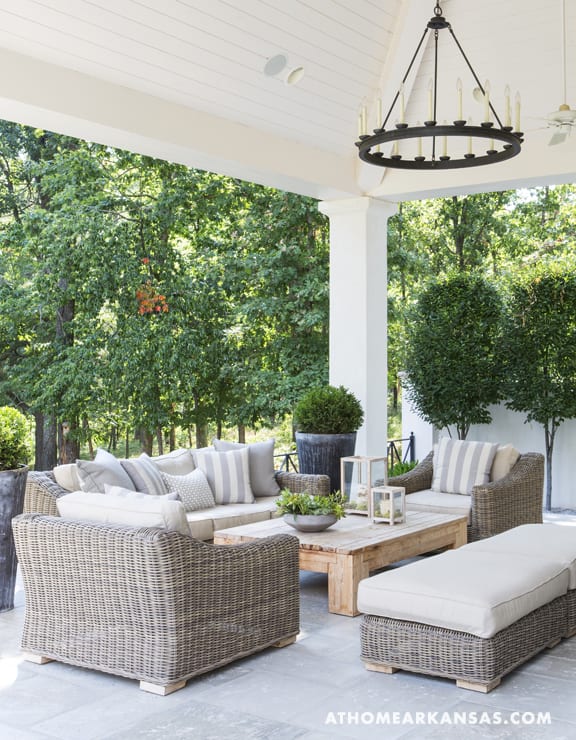 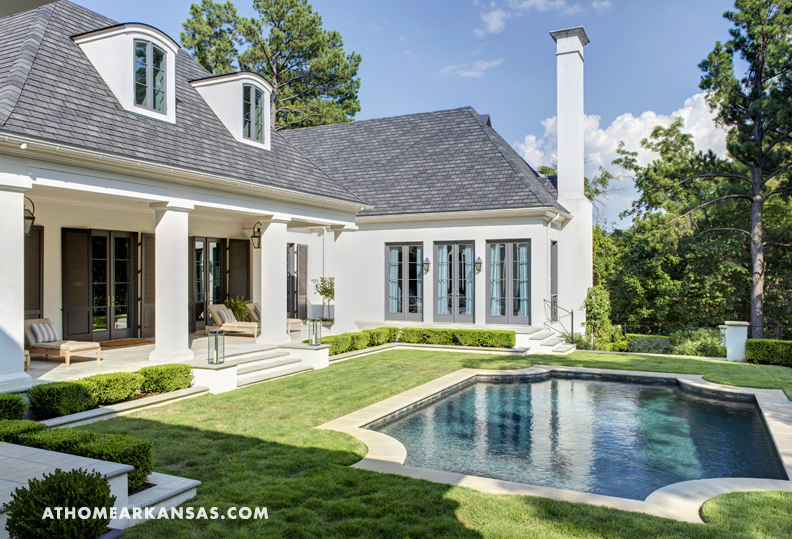 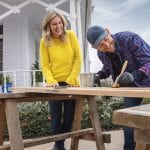 Fixer to Fabulous, the remodeling show featuring Bentonville’s Jenny and Dave Marrs, has just been renewed for 16 new episodes with HGTV—its third season with the network. In the series, the couple ...

END_OF_DOCUMENT_TOKEN_TO_BE_REPLACED 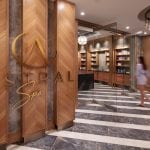 Summer is a time of rest and relaxation—and you don’t have to book a trip to the beach just to feel renewed. Read on for three Arkansas spas that offer the feel of a getaway right here at home. | ...