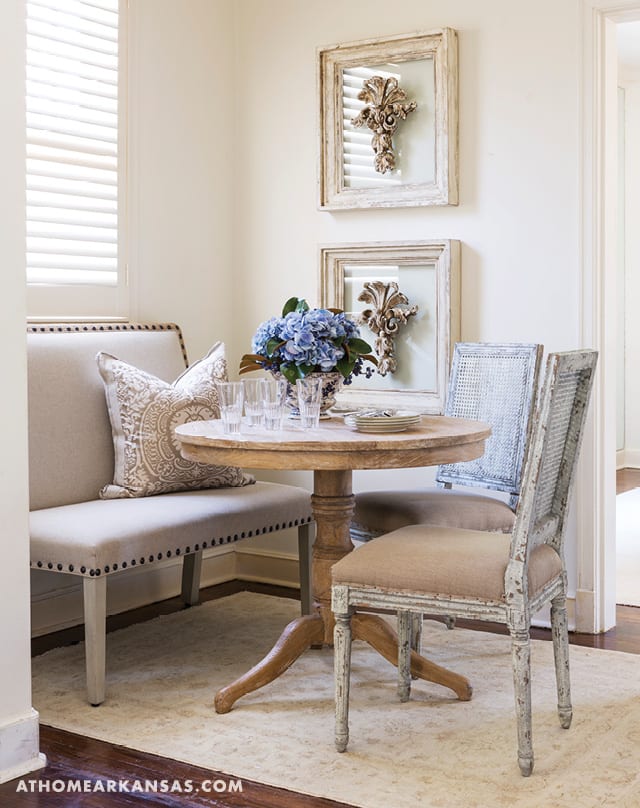 Sometimes, it seems like things are just meant to be. Such was the case when former Arkansas State University basketball star Julie Hagood spotted a for-sale sign on one of her favorite Little Rock streets. “I wasn’t really house hunting at the time, but I immediately called my realtor,” she recalls. The house—which was listed for sale that very morning—had everything Hagood and her nine-year-old daughter felt their own home was lacking—namely a location within walking distance to some of their favorite spots, whether grabbing a cup of coffee or a taco dinner.  “At first I planned to just paint, refinish the floors, and update the lighting, but it kind of snowballed from there,” Hagood says of the project, which grew from those simple cosmetic updates to encompass an enlarged kitchen space, a fresh palette, and new furnishings. 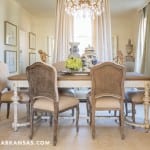 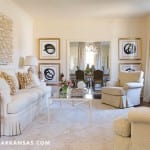 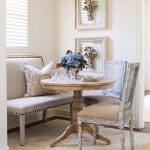 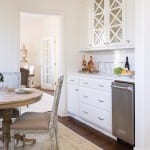 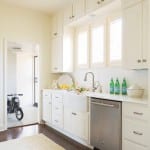 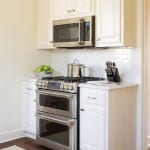 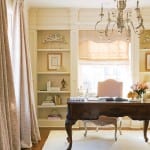 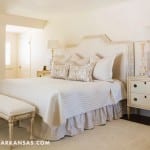 Cozy to Comfortable
Like many homes in the Pulaski Heights neighborhood, the first floor was comprised of several small rooms. Hagood sought a more modern and livable floor plan and set out to create an inviting and open living area. “There were a few times I wanted to pull out my hair, but it was fun,” she says of the experience of managing the work herself. “I worked with people who did what they said they were going to do, so it went pretty smoothly.” When it came time to choose finishes, she called on the expertise of designer Debi Davis, whose work she had admired in the home of a friend. “I knew I was making decisions that I would have to live with for a while, and I wanted to get it right,” she says. Davis brought in her signature palette of fresh and feminine neutrals along with comfortable seating and classic casegoods.

Color Considerations
Not long after Davis and her team finalized the interior scheme of cream, ivory, and blush hues, Pantone named “Rose Quartz” as a color of the year. “It’s a color we have been using for years, and we consider it an extension of a neutral palette,” Davis says of the light shade that is displayed most prominently in the first-floor home office.
To help the perimeter of the home’s small rooms fade away visually, Davis wrapped them all in one color, rather than using a contrasting color on the trim and ceilings. She also chose large, neutral rugs to improve the natural flow from room to room. Additionally, the finishes used throughout the home are a pleasing mix of new and old, rustic and refined; together, they ensure that the soft palette is anything but boring.

Classic Meets Casual
The updated house was enhanced with new furnishings from top to bottom, except for an antique chandelier and desk that Hagood brought from her previous residence. “She is a young, energetic woman, and we wanted to give her a home that was fresh, but we wanted to make wise investments,” says Davis of their traditional furniture choices. In the living room, they chose durable fabrics that would stand up to daily use by Hagood, her young daughter, and their dog; the room is now an often-used space for movie nights.

Throughout the home, Davis combined new pieces that reference classic shapes with antique and vintage finds. Minimal accessories give the spaces a clean feeling while modern art adds contrast and interest to the traditional, serene palette. “Scale is important in small spaces,” Davis explains in regard to the overall design philosophy. “Oversized pieces can make the rooms feel smaller, but too many smaller items feels messy.”

As for the structure, in addition to widening the doorways to improve traffic flow between rooms, the team opened up a small butler’s pantry to create an intimate dining nook as well as extra cabinets and display space. “That has become our favorite spot. It’s nice to have a place to sit with my daughter at the end of the day that is away from distractions,” Hagood adds.

Thanks to the combination of  subtle structural updates and a soft, neutral palette, the home feels much larger and livable than it did when Hagood originally purchased it. “We now have plenty of space to host my nieces and nephews and my daughter’s friends,” she concludes.