Bentonville and Rogers are two of Arkansas’s fastest growing communities with some of the state’s most well-kept secrets. From the excellence of internationally renowned art collections to the simplicity of a perfectly brewed cup of joe, this corner of the state seems to have it all. The Coca-Cola mural on Bentonville City Square’s Tate & Haney Building is a 2016 re-creation of a similar ad once found there. This spot is one of the many photo ops along the Razorback Regional Greenway, a 36-mile shared-use trail stretching from Fayetteville to Lake Bella Vista. Photo by Stephanie Maxwell.

While much of The Natural State is bike-able, Bentonville and Rogers are particularly cycle-friendly communities. To wit: Multiple local bike shops, cycling events, a bicycling-themed brewery (see the next page), and more are keeping cyclists busy in the area. With several of those shops offering rentals and daily group rides, it’s never been easier to go for a spin while you’re in town. See the below listings for bike sales, service, tours, and rentals….

END_OF_DOCUMENT_TOKEN_TO_BE_REPLACED

If you’re craving a small-town vibe with big-time events, head south. El Dorado and Magnolia offer exceptional dining and entertainment, unique shopping, and a strong sense of community. At the rate these small towns are growing, you’ll need to plan more than one visit to keep up. 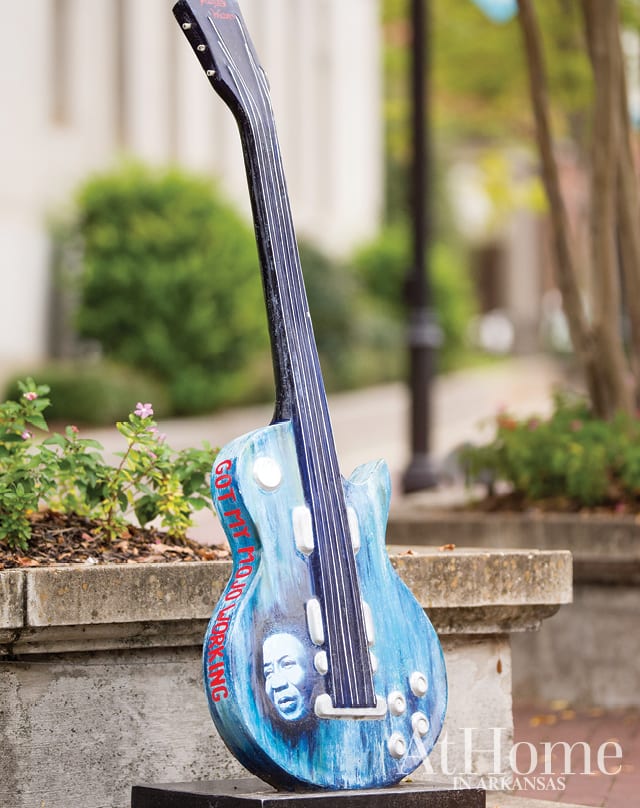 For years, events like MusicFest El Dorado and the El Dorado Film Festival have given Union County clout as an arts destination. But the recent completion of Phase 1 of El Dorado’s Murphy Arts District, MAD, is about to put the south Arkansas town on the map in a way it hasn’t experienced since its 1920s oil boom. New facilities mean ample opportunities for locals and tourists to experience world-class art….

END_OF_DOCUMENT_TOKEN_TO_BE_REPLACED

Combine a thriving retail and dining community with an outdoorsy appeal, and what do you have? West Little Rock. Whether you’re a shopping enthusiast, nature explorer, or just looking for a place to chow down, check out our lineup of places to visit in the area.

Food blogger Kevin Shalin of “The Mighty Rib” (themightyrib.com) is back with At Home for another round of restaurant picks. This time, we put West Little Rock on this self-proclaimed food-lover’s plate, and asked him to share a few of his favorite places to dine. END_OF_DOCUMENT_TOKEN_TO_BE_REPLACED

With its thriving arts scene, one-of-a-kind dining experiences, and socially savvy charm, these unique and eclectic cities offer something for everyone A young girl beats the summer heat with an ice cream cone from Burton’s Creamery in Fayetteville’s Shulertown, a community food truck venue and market. Something to Taco About
What happens when you combine a plethora of authentic taquerias and a catchy hashtag? The Springdale Taco Tour! With multiple stops throughout the town, it’s a fun way to take in the sights and find your favorite taco. The premise is simple: 1. Order your favorite taco at one of eight different restaurants. 2. Take a photo and tag #springdaletacotour. 3. Repeat. Visit teamspringdale.com/tacotour for more info.

END_OF_DOCUMENT_TOKEN_TO_BE_REPLACED

Planning a trip? Look no further than the city that comes to life for outdoor summer fun. Visitors and locals alike can enjoy historic hotels and bathhouses, nationally acclaimed lakes, and more in this conveniently located Arkansas destination A Hot History
Hot Springs, appropriately named for the naturally occurring hot spring waters found in the area, has been a draw for travelers from its earliest days. The now legendary waters were rumored to hold healing powers; thus the town’s bathhouses became a destination for guests looking for R&R. Eight bathhouses were built between 1892 and 1923, and this collective grouping became what is known today as Bathhouse Row, a National Historic Landmark District. Two of these original bathhouses are still in operation today, Buckstaff Bathhouse and Quapaw Baths & Spa. Over the years, Bathhouse Row and the waters of the hot springs helped the town to earn the nickname it still carries: The Spa City….

END_OF_DOCUMENT_TOKEN_TO_BE_REPLACED

The capital city is alive this summer. Check out some of the best places to eat, unwind, and enjoy the area END_OF_DOCUMENT_TOKEN_TO_BE_REPLACED

Known as the City of Colleges, or perhaps better known for its nickname, The City of Roundabouts, exciting things in Conway keep visitors circling back for more Brewing for Good
What’s in a cup of coffee? If you ask Blue Sail Coffee, the answer is opportunity—in large numbers. “Coffee is a part of our everyday lives. And for some of us, it is definitely more than one cup a day,” Stormie Perry, Blue Sail Coffee’s Director of Marketing & Social Media, says….

END_OF_DOCUMENT_TOKEN_TO_BE_REPLACED

Northeast Arkansas continues to experience revitalization in the arts, while adding flavor to the culinary scene and fostering a strong sense of community Want to call downtown Jonesboro home? Three separately owned buildings featuring a total of 29 lofts are currently under construction in the area. Stay tuned to the Downtown Jonesboro Association Facebook page or sign up for their newsletter for more info. downtownjonesboro.com

END_OF_DOCUMENT_TOKEN_TO_BE_REPLACED The Next Act
In terms of a local pop culture landmark, there’s nothing more iconic than the Rialto Theater. Thanks to efforts from the Downtown Beautification Committee and numerous generous donors, including Entergy Arkansas, Inc., the structure’s famous neon lights regained their glow in 2016.  The community had the opportunity to see its newly relit neon marquee, which was recently renovated, during the town’s annual Holiday of Lights lighting ceremony.

The Rialto was originally constructed in the 1920s but received its iconic Art Deco-style façade during a 1940s renovation. The building is on the National Register of Historic Places and still remains in operation today. Call the theater at (501) 268-6699 for showtimes. For History-Worthy Events
Known as “the spot” for weddings, galas, holiday parties, and pretty much any other event, Robbins Sanford is a structure with a historical past. The venue boasts a grand hall that accommodates 250 people as well as a carriage house, which can hold almost 70. The combination of its attractive downtown location and early 20th century charm make it a character-rich choice for hosting an event.

The space garners its name from the famed Robbins-Sanford Mercantile Company, which was located here beginning in 1908 when the building was constructed until they went out of business in the 1950s. In 2009, it received a restoration that reinstated much of its original charm, making it the celebrated venue it is today. An Established Institution
For many, Searcy and Harding University are synonymous. While the campus buildings may play a role in Searcy’s history (especially in the minds of those who walked their halls), today’s attendees are bringing current trends to the area. More than 6,000 students—from 49 states and 44 foreign countries—currently attend the private, four-year liberal arts university, making it an institution that continues to shape Searcy’s history. Good Eats
You’ve heard the saying “Do one thing, and do it well.” Slader’s Alaskan Dumpling Co. epitomizes this with a menu that consists of three main course options: chicken pel’mini, beef pel’mini, and potato and cheese pierogi. Whichever you are in the mood for, the heaping plates of this comfort food won’t disappoint. Stop in for the dumplings and stay to linger over an Alaskan Tea or a classic pour over. In addition to their staples, they also offer ice cream and macarons from Little Rock’s Loblolly Creamery as well as Diamond Bear root beer.

Areas of Interest: A Few of Our Favorite Stops in Searcy LOCAL FINDS
If you’re ready to shop, start in the heart of Benton near the town square. Here, you’ll find Lavish Boutique (501-776-2700), a trend-setting yet down-to-earth shop filled with clothing lines such as Z Supply, Buddy Love, Judith March, and more. Shoes, accessories, handbags, and jewelry, including several lines that have a focus on charitable giving and/or sustainability, can also be found in store. In addition, they offer a small selection of men’s and children’s clothing. Follow them on Instagram (@lavishonmain) to see their latest arrivals.
Just blocks away you’ll find another women’s boutique, Southern Roots (501-778-3339). Owner M’Leah Donaldson stocks the shop with fashionable brands such as Free People clothing and Kendra Scott jewelry. They also offer in-house monogramming on t-shirts, sweatshirts, handbags, and more—all of which are available in the shop. Aside from the latest looks in fashion and accessories, there are also great gift items including Corksicle tumblers. Ask the staff to wrap your finds for the holidays, and Santa will have one less thing on the list!

MAKE IT HOME
If you live in central Arkansas, Benton has amazing resources for home renovations or small updates. For interiors, contact GW Lighting (501-315-2400, gwlightingandhome.com) on Military Road. In addition to their huge selection of light fixtures, they also offer cabinetry and door hardware. They carry decorative pieces that can help to make your house a home as well, including artwork, accessories, and case goods. If they don’t have what you are looking for in-store, browse their special order catalogs and consult with their eager, helpful staff to find what you need at a fair price.
For outdoor and fireplace needs, visit Benton staple Congo Fireplace & Patio (501-316-4328, congofp.com). Whether you are looking for a wood stove, a fireplace surround or outdoor furniture, their 20,000-square-foot showroom is stocked with the latest offerings. In addition, they also carry fire pits, grills, smokers, and outdoor accessories. Drop in to visit them at their convenient location just off Interstate 30, which is open Monday through Saturday.