Spending a Saturday morning driving around older neighborhoods garage sale-ing, fortified by coffee, pastry, and NPR, is one of my most favorite past-times in the whole world.  Lately it seems however, that these luxurious, meandering, Saturday morning excursions have been harder and harder to come by. But this past weekend I decided to treat myself for Mother’s Day. I threw caution to the wind, shucked all my chores and responsibilities on Saturday morning, filled my coffee cup with rocket full, my pockets with one dollar bills and hit the neighborhood streets in search of used treasures.

Thankfully, I was not disappointed. 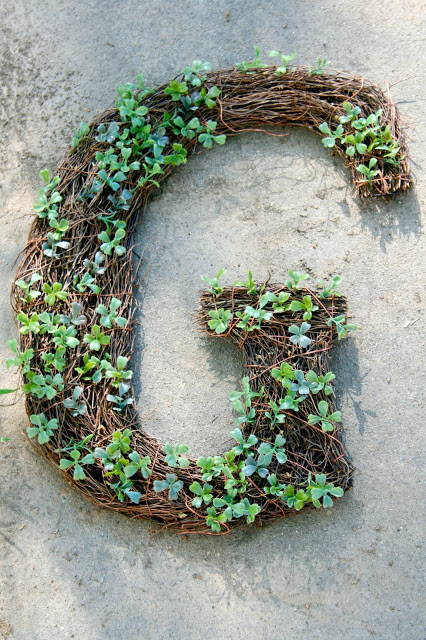 BEFORE
This grapevine G was just one of my favorite finds at the great price of $2. As soon as I saw it I knew I was going to wrap that puppy in yarn. {Note: I know that wrapping things in yarn has become the new “put a bird on it” of the crafting world, but I don’t care. Wrapping shapes in yarn is inexpensive, takes almost no skill, and satisfies the crafty itch within minutes. So there.} The only thing I did to prepare my “G” was to rip all the little plastic green leaves off of it, which was pretty easy as they were not glued down well. 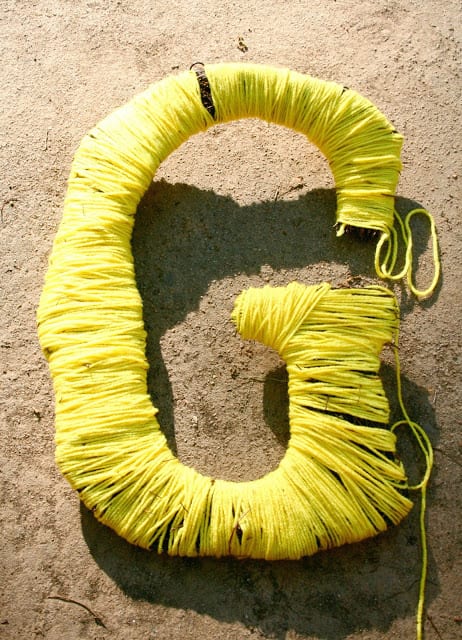 Next I wrapped the whole letter in one layer of yellow acrylic yarn from a pile of crochet cast-offs that  someone gave me months ago. I called this the “crumb layer” after the baking technique,because you can still see bits and pieces of  the grapevine coming through the yarn. This step was by far the most time consuming, but instead of rushing mindlessly (and impatiently,) through to the end, I tried to enjoy the process, letting my Monday stresses unwind with my skein of yarn. 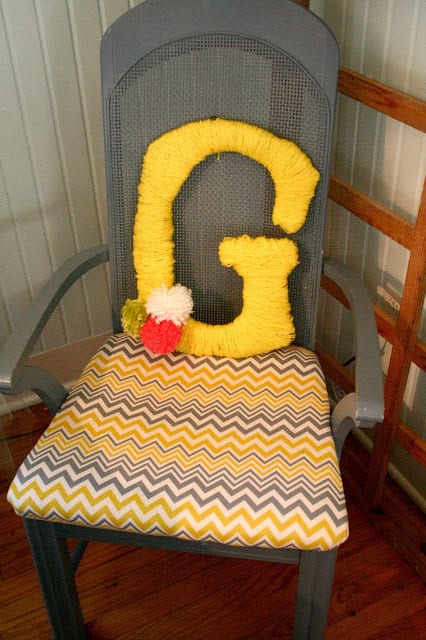 For the final layer, I went around the G  two more times with the yarn, working to cover up the places where the vines were poking through still. Some pieces were so small and poky that I just broke them off all together. In the end there are still a few places where you can see the dark bits of the grapevine, but I don’t mind. I like a little nod to imperfection in my crafting. The first go round with the yarn took about twenty minutes, but the second two took half that time combined. 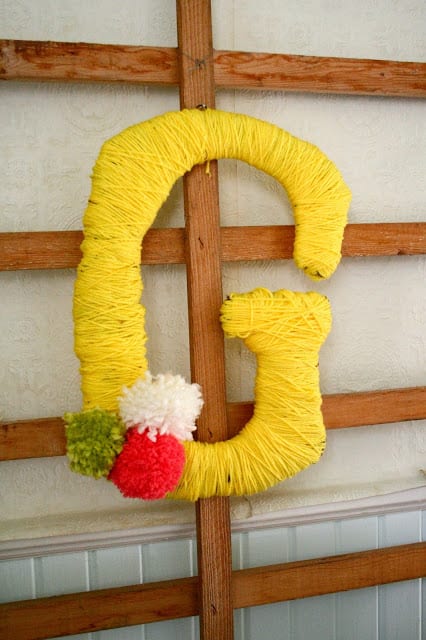 AFTER
To add one more colorful bit of fun, I added three fuzzy pom poms that I made using the medium size Clover Pom Pom Maker, in bottom left hand curve of the G. This little bit of color and weight was the perfect addition and helped to set off the bright yellow just right. I adore how the G turned out, and the combination of sunny cheer and homespun charm make me smile every time I catch a glimpse of it. Because I used so many items that I already had on hand -yarn, pom poms, pom pom maker, – the whole project cost me $2 in cash and about 45 minutes in time.
So tell me, do you enjoy garage sale-ing as much as me? Do you have to fight the urge to wrap your whole house in yarn or put a bird on it? What is the best make-over craft project you have ever done? I would love to know!