Discover Hot Springs: All you need to know about visiting “America’s First Resort” 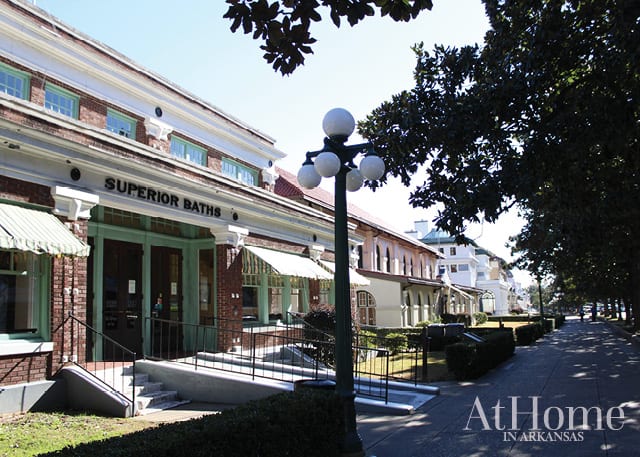 Walking down Central Avenue on a chilly day before winter started to turn to spring, I was struck by the way Hot Springs has managed to honor its historic charm while evolving over the years. I watched a pair of backpackers in front of me taking in the city and I saw it again through fresh eyes: They admired the architecture, popped into each and every storefront, and warmed their hands over the steam of the hot water bubbling through a fountain in front of Fordyce Bathhouse, now the Hot Springs National Park Visitor Center.

I’m guessing that their impression of the city was a lot like mine on my very first visit to downtown Hot Springs—that I’d somehow stepped back in time, and though I didn’t quite understand everything around me, I was fascinated by it. Over the years, that awe has turned to reverence for a place that has grown and changed while many of its landmarks have stayed the same.

This sentiment has been echoed again and again by Hot Springs visitors and locals alike. “It’s so inspiring to see historic buildings revitalized by new, independent businesses,” says Sonny Kay, executive director of nonprofit organization and music venue Low Key Arts. Kay moved to Hot Springs for the position in 2017, but he first visited the city in 2006 while touring with his band. “It seems like there’s just this wave of innovation and energy cresting here at the moment,” he says.

Anthony Valinoti, owner of Deluca’s Pizzeria Napoletana, has the same pride in the current state of his city: “People willing to invest in the city’s future have brought about a dramatic shift,” he says. “There’s a sense here now of hope and optimism.”

The festivals, restaurants, and shops described in the following pages are more than enough reason to be optimistic about what’s happening in Hot Springs. Make your next trip this month—and read on for our can’t-miss recommendations while you’re there.

St. Patrick’s Day is always a rowdy affair in the Spa City. Here’s a rundown of events. 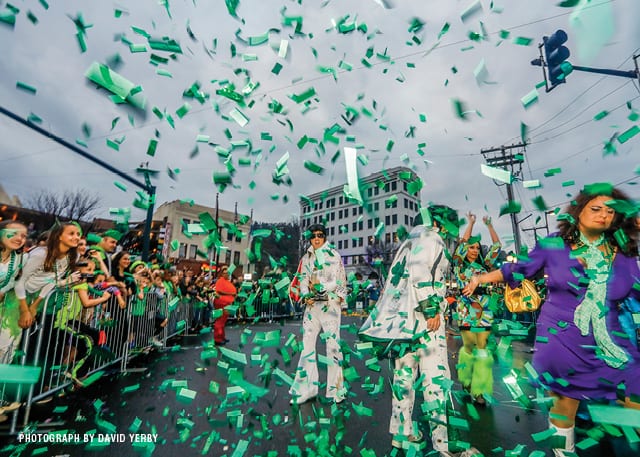 The world’s biggest little parade happens right here in Arkansas. To be exact, it happens within the 98 feet of Bridge Street in downtown Hot Springs. “When we began the parade 15 years ago, it was a crazy idea that was born in the midst of a gathering of friends, some adult beverages, and a desire to celebrate St. Patrick’s Day,” says Leysa Lowery. “I believe we all thought it would simply be a fun event, giving people a chance to be Irish on the most Irish of American holidays.”

Lowery says that she and the other founders never predicted that the parade would one day draw tens of thousands of revelers and book the likes of Grand Funk Railroad, Morris Day & The Time, Joey Fatone (2018 grand marshal), and Jon Heder (2018 parade starter). But while out-of-towners roll in for celebrity sightings, the locals are steeped in city-honored traditions, some sillier than others. Anthony Valinoti, owner of Deluca’s Pizzeria Napoletana, can now claim two coveted titles: He’s this year’s official king of the parade (“one of the greatest honors of my life,” he says) and also a member of the city’s “International Order of the Irish Elvi.”

“Initially, I thought the whole idea was a little crazy—grown men in Elvis costumes, marching down a street,” Valinoti says. “Well it actually turns out to be the thing I look forward to the most when the parade rolls around. We have more fun than humans should be allowed to have. It’s one of my favorite days of the year.” shorteststpats.com 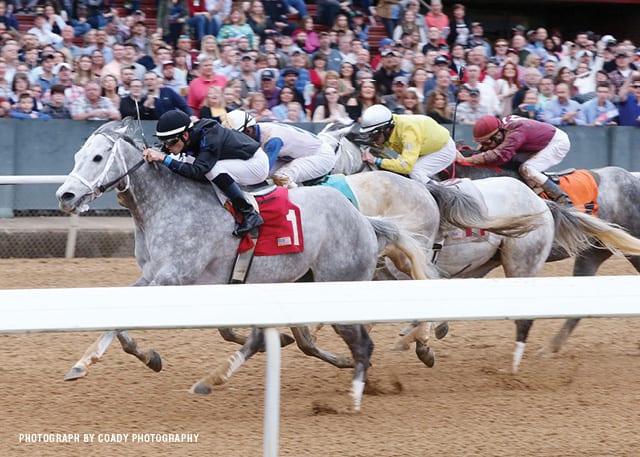 Oaklawn’s racing season might have kicked off in January, but some of us prefer to place our bets from the infield. Every year in mid-March, Oaklawn opens the interior of the ponies’ 1-mile dirt track, offering additional open-air viewing for more casual spectators to wander. There’s a craft beer garden, live music, and, if you have a family with you, several children’s areas, but if you’re intent on winning some money, there are plenty of clerks willing to take your wagers, too.

Can’t make it on March 17? Don’t worry—this is not your only chance. The infield is open each of the last five Saturdays of racing season: March 17, March 24, March 31, April 7, and April 14, which is the Arkansas Derby. oaklawn.com 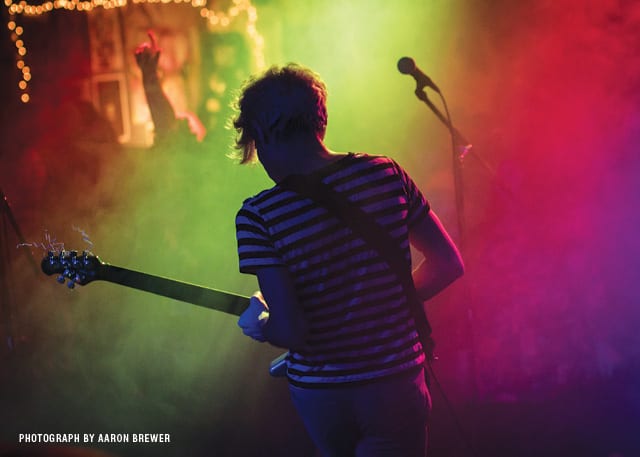 Valley of the Vapors—or VOV, as it’s called—is back for its 14th year. The five days of independent music are planned around the time of South by Southwest in Austin, Texas, a festival that has a reputation for drawing up-and-coming acts from all over the world. By offering opportunities for those same bands to play in close proximity on their way to or from Texas, audiences in Arkansas get the chance to hear new tunes a little closer to home.

Organized by Low Key Arts, VOV is proud to showcase everything from hip hop to metal to alt-country. “VOV is a great place to see a wide variety of international acts on a small stage before they graduate to the big time,” says Sonny Kay, executive director of the festival. “It’s also a firsthand experience of our incredibly supportive community who come together every year to make the festival something that bands are eager to return to.”

If its 14 years aren’t testament enough, VOV recently garnered another metric to measure its growing success: In January, the event took home the Best Festival award at the inaugural Central Arkansas Music Awards. That’s something to sing about. valleyofthevapors.com

Just a few of our favorite Hot Springs hot spots.

Take a Taste
The Pancake Shop
When Southern Living, The Food Network, and Garden & Gun say this is the place to get breakfast, you kind of have to listen. Try an order of the buckwheat pancakes with blueberries—they can’t be beat. pancakeshop.com

Bone’s Chophouse
In addition to mouth-watering steaks, the menu at Bone’s boasts a bevy of seafood favorites, including Oysters Rockefeller, market-fresh lobster tail, and shrimp and grits. boneschophouse.com 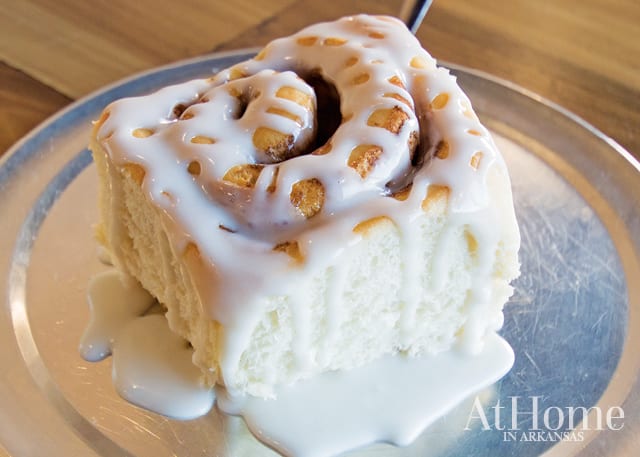 Will’s Cinnamon Shop
This bakery specializes in all things cinnamon, from Snickerdoodles to gluten-free cinnamon streusel muffins and pretty much everything in between—including, of course, Will’s signature cinnamon rolls. facebook.com/willscinnamonshop

Rolando’s
The Hot Springs location of Rolando’s offers a dreamy back patio bedecked with strings of colored lights. Order a margarita (or two) and enjoy the ambience and frequent live music. rolandosrestaurante.com 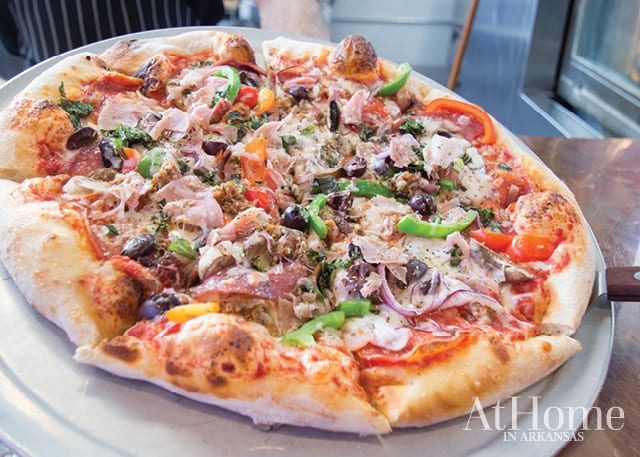 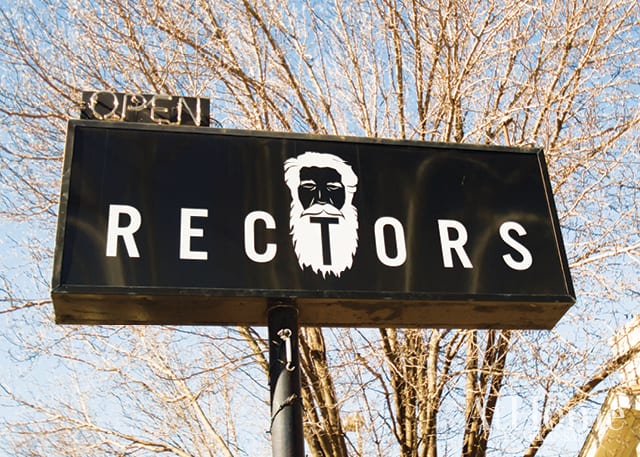 Rectors Restaurant
Go for the new-Southern menu, stay well past dessert for the chance to talk to chef and owner Mychal Hall, who, if you’re lucky, might enlighten you on the restaurant’s namesake, Henry Massey Rector, the sixth governor of Arkansas and Hall’s ancestor. rectorshotsprings.com 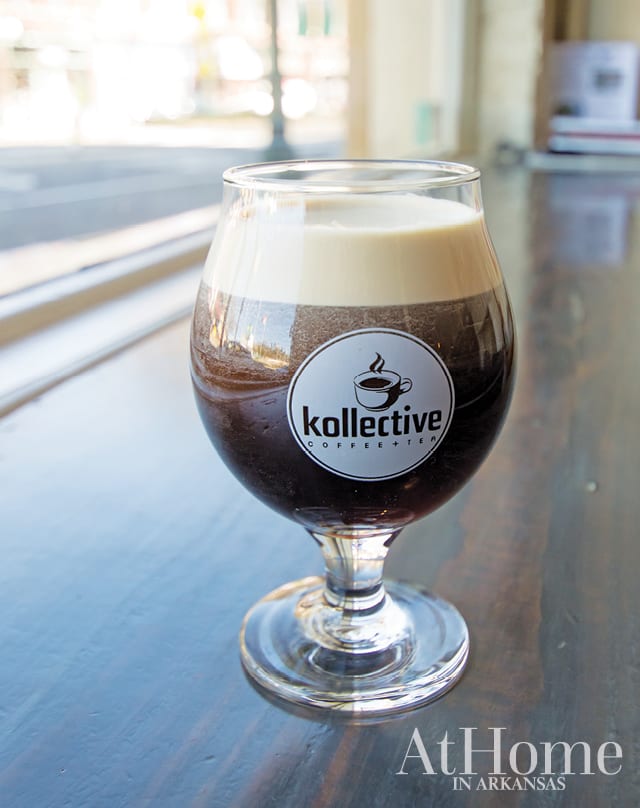 Grab a Drink
Kollective Coffee + Tea
With rotating exhibits from local artists on the walls, this coffee joint also plays the part of a gallery. Hungry? They’ve got a well-rounded menu of breakfast items, salads, and sandwiches, too. facebook.com/kollectivecoffeetea

The Mountain Valley Spring Water
The iconic Arkansas bottled water brand dates back to 1871. You can read all about its storied history on the second floor of the company’s visitor center while sipping free samples of flavored waters. mountainvalleyspring.com 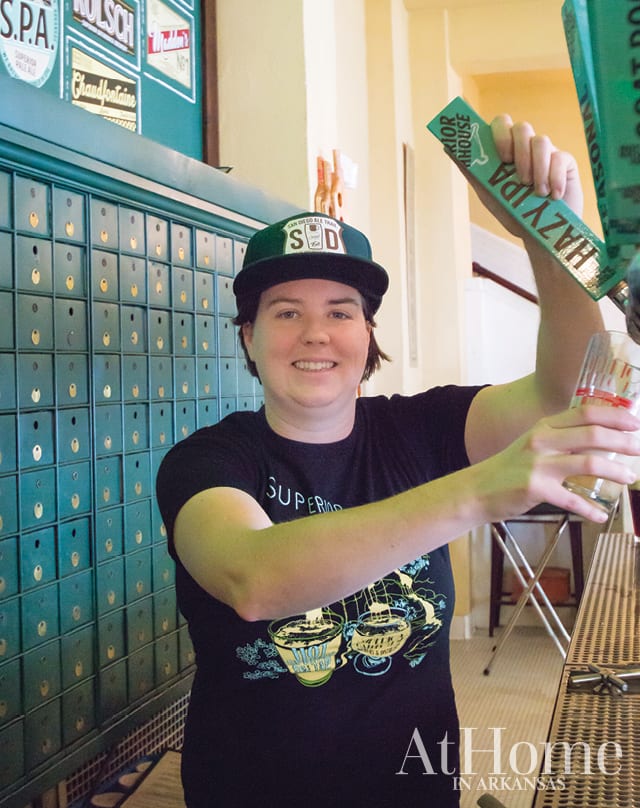 Superior Bathhouse Brewery
This brewery’s founder, Rose Schweikhart (pictured above), was thinking outside the box when she decided to house her brewery in a former bathhouse. Bow down: Schweikhart has been named queen of the 2018 St. Patrick’s Day parade. superiorbathhouse.com

Craft Beer Cellar
Visitors can purchase and carry from this store’s large beer inventory (liquor-store style) or order at the bar and opt to enjoy in a taproom outfitted with games. craftbeercellar.com

Maxine’s Live
Walking into Maxine’s, you’ll most likely be greeted by the dim glow of neon signs, hum of busy bar patrons, and commotion coming from the band around the corner. Order a drink and grab a cozy seat by the stage to soak it all in. maxineslive.com 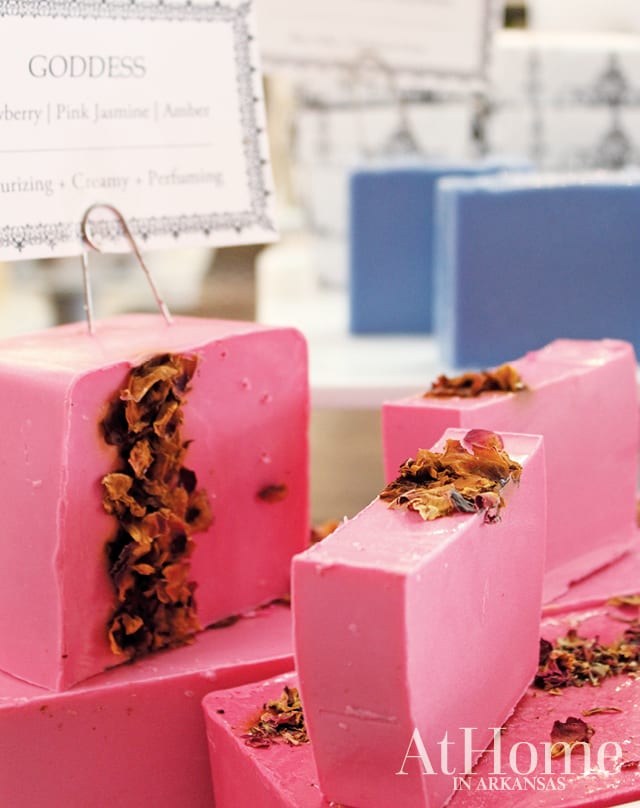 Shop & See
Bathhouse Soapery & Caldarium
From sliced soaps to mineral salts, scrubs, and bath bombs, this soap boutique is a bubble bath-lover’s dream. Be sure to ask for the story behind the “Were Not Sweethearts” fragrance, inspired by the building’s historic drama. bathhousesoap.com

30 East Designs
This home décor store carries farmhouse-style furniture, lights, and accessories with an urban industrial twist. Items made in-store are truly one of a kind. facebook.com/30eastdesigns

Accessory Gallery
Get a start on your spring wardrobe by shopping transitional pieces like light cardigans, statement prints, and stylish slides. facebook.com/shopag

Riley Art Glass Studio
Decorative blown glass lines the walls and shelves of this studio and gallery owned by a pair of brothers. If you stop by during studio hours (Tuesday through Saturday), you might be lucky enough to catch the two at their craft. rileyartglass.com

Garvan Woodland Gardens
Make plans to get outside and take in the natural beauty of this botanical garden. Schedule a group tour or opt to explore the 210 acres of landscape on your own. garvangardens.org

Arkansas Furniture
This can’t-miss furniture store has three showrooms in one location, including an entire section devoted to outdoor furniture. arkansasfurniture.com 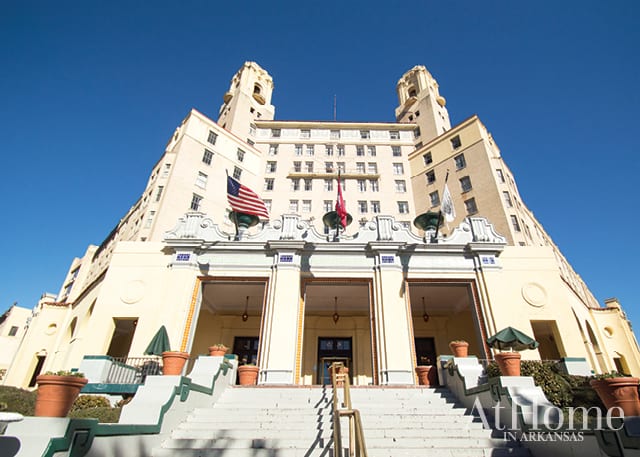 Stay the Night
The Arlington Hotel Resort & Spa
Originally opened in 1875, the Arlington is one of the city’s most imposing and well-known landmarks. Drop by the Lobby Bar to admire the iconic mural behind the taps. arlingtonhotel.com

The Waters
The historic Thompson Building, built in 1913, finds new life as a boutique hotel after extensive renovation and preservation efforts. The hotel’s restaurant and bar, The Avenue, is another must-visit. thewatershs.com

The Hotel Hot Springs
Conveniently connected to the Hot Springs Convention Center and still walkable from downtown happenings, this hotel is ideal for either work or play. hotelhotsprings.org

This section is made possible by support from Accessory Gallery, Arkansas Furniture, and Garvan Woodland Gardens.