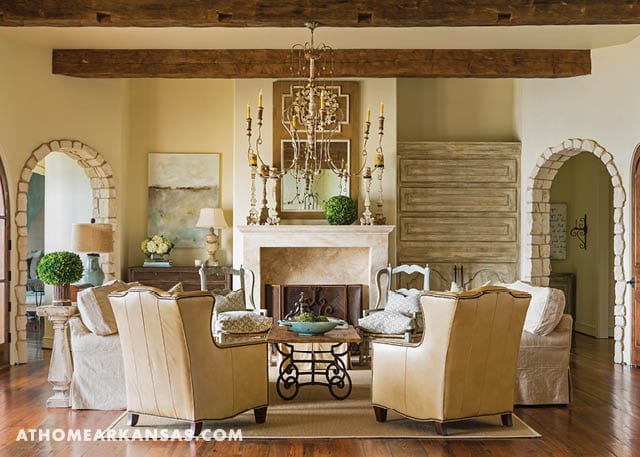 As the saying goes, “the third times a charm.” While the first two homes built by this Little Rock couple were equally desirable and attractive, the third space they completed together—a home on the shores of the Arkansas River—seems to be a true culmination of their passion for the outdoors as well as their desire for a clean and calm interior space. With a bit of foresight and the help of talented Little Rock-based designer Janna Toland they created a space that’s sure to be called home for decades to come. 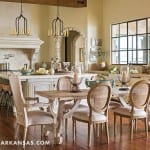 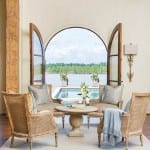 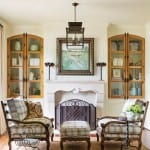 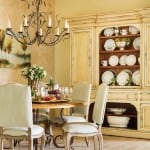 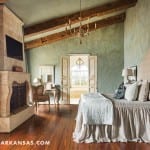 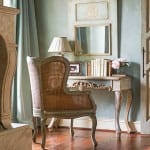 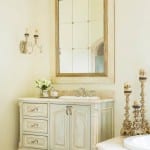 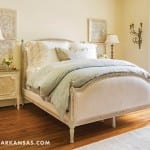 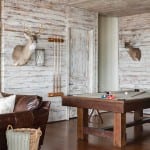 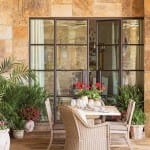 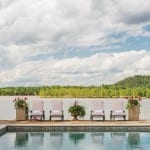 “We had always lived in a neighborhood, and we knew we wanted land,” the homeowner says of the prompt to purchase approximately nine acres on the banks of the Arkansas River in West Little Rock. Initially, the land was far from build-ready. “When we first bought the property, you couldn’t see the river. So we leveled the land and cleared the property and built a sea wall to help with flooding and erosion,” the homeowner says.

Once the canvas was set, it was time to begin work on the home itself. Because of their past experience, they had some ideas in mind. “We sketched out the plans ourselves. We got pictures from magazines and pieced it together, you know, where we wanted the rooms to go and the size of them,” the homeowner explains. From there, they took the ideas and sketches to Gwen Couch, a relative with experience in drawing and designing homes. “She kind of pieced it together like a puzzle,” the homeowner says. These sketches included a stone façade, open living area with access to a pool and a view of the river, as well as five bedrooms to accommodate their soon-to-be-grown family, which includes two sons in college and one in high school. High on the priority list were lots of windows for light and “good living space, so there’s plenty of room for everyone when the boys come home,” the homeowner adds.

Turning their attention to the interior of the home, the homeowners called on Janna Toland whom they had worked with in the past. Their former home was French Country in style, and while this home is a departure from that aesthetic it still has an air of relaxed refinement that exudes grace and allows for a merger of formality and comfort. “I just wanted a clean, light look,” the homeowner says. More specifically, Toland describes the design as “California clean meets European softness.”

‘The paint treatments and selected palette throughout the home are perhaps the most prominent display of this style. The entire home is wrapped in light, unimposing hues that are reflective of the nearby river as well as the land. “We used safe neutrals that reflect the outdoors without being overbearing,” Toland says. To add interest and boldness to the design, Toland relied on textures and finishes. For example, a custom suede paint treatment on the walls provides depth and detail as well as a fluidity that’s reminiscent of the water.

As for the furnishings, a mix of modernized pieces inspired by antique or old world finds fill the rooms to give the home a collected-over-time look as opposed to a brand-new feel. Case in point, replicated antique apothecary hardware and reproduction Bergère-style chairs mix seamlessly with a Suzanne Kasler lantern in the home’s sitting room. Other elements including the reclaimed wood floors seen throughout much of the home, the architecture’s stone curved archways, and even the linen bedding found in the master and guest suites are cozy elements intended to give what Toland calls a “sophisticated European cottage feel.”

Of course, as the homeowner noted, much of the appeal of the home site was the location. To make the most of the riverfront setting, the home was designed in a U shape that opens up to reveal a view of the pool and outdoor area as well as the Arkansas River. Floor-to-ceiling windows and doors in all of the rooms that face the body of water give an unobstructed view and also allow an abundance of natural light to flow into the interior spaces.

Toland notes that it was a main goal to casually extend the living space outdoors with the same European-influenced style. “The emphasis continued with layering the textures of stone, wood, concrete, rattan, and iron and then using soft linens to accent the gorgeous outdoor backdrop and water. We did not want to create too much overdone color and pattern that would take your focus off the water or the picturesque landscape backdrop that seasonally provides its own texture and design,” Toland says.

As for how the family enjoys the outdoor space, the homeowner says, “we love the view because you see the island and Maumelle, and we have a boat dock where the boys have a fishing boat. My boys and husband are big hunters and fishers, so they love living here for that aspect.” This coupled with the interior’s welcoming design make the couple’s third newly built home one that would be hard to top.