At Home in Arkansas:

How would you describe this home, in five words or fewer?

AHIA: Does that show through in the kitchen?

RM: Yes, it does, through the materials Jim Clements and I used. The backsplash, which is made from terracotta floor tile, the architectural elements for the hood, a bronze sink, a bead-board ceiling, which we mottled to appear painted a number of times. It feels like an old, warm European kitchen with bread baking and soup on the stove. 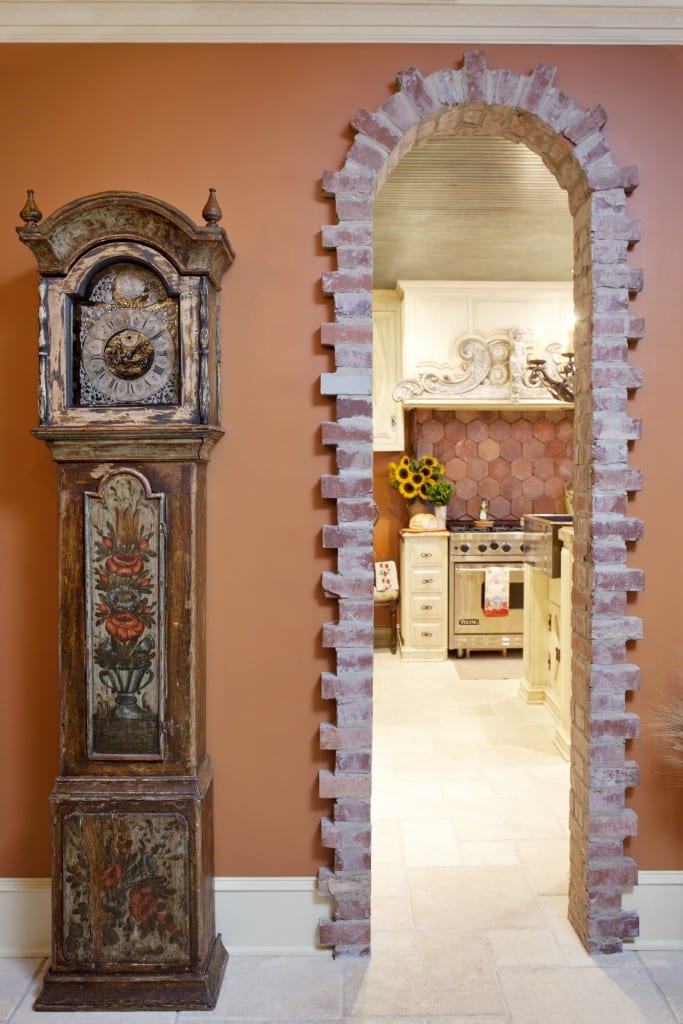 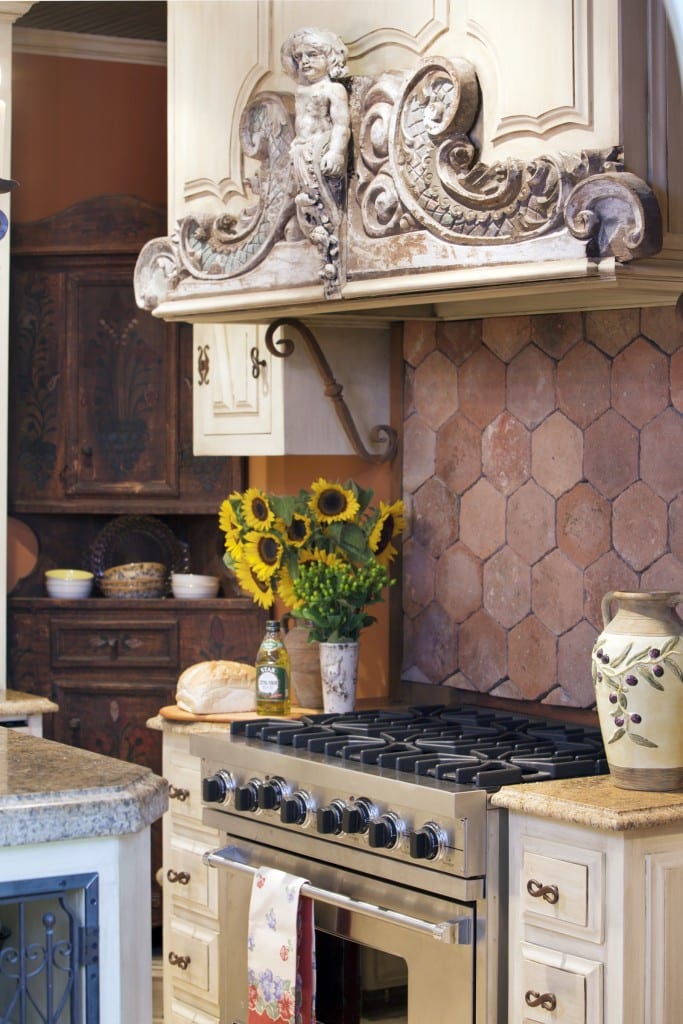 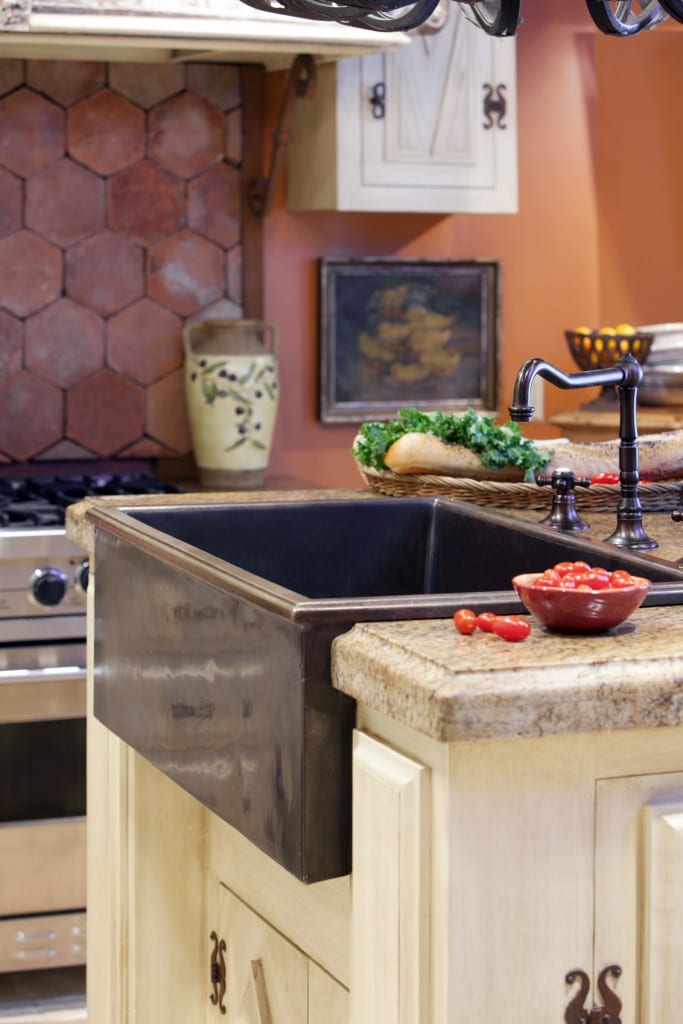 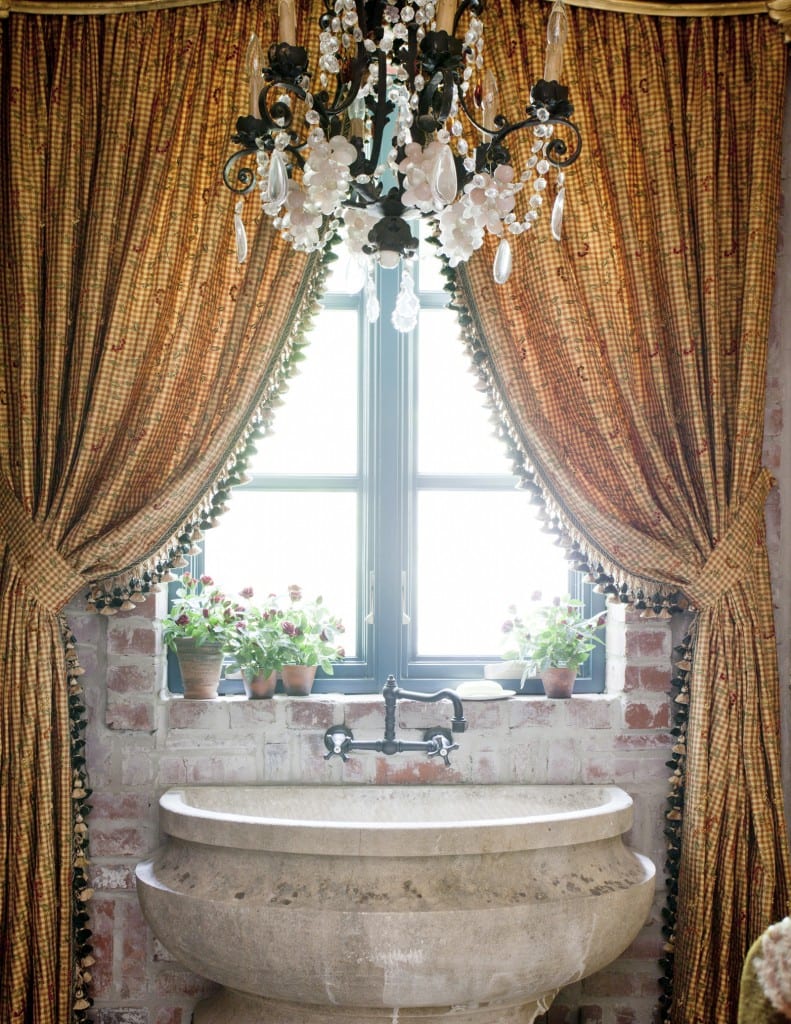 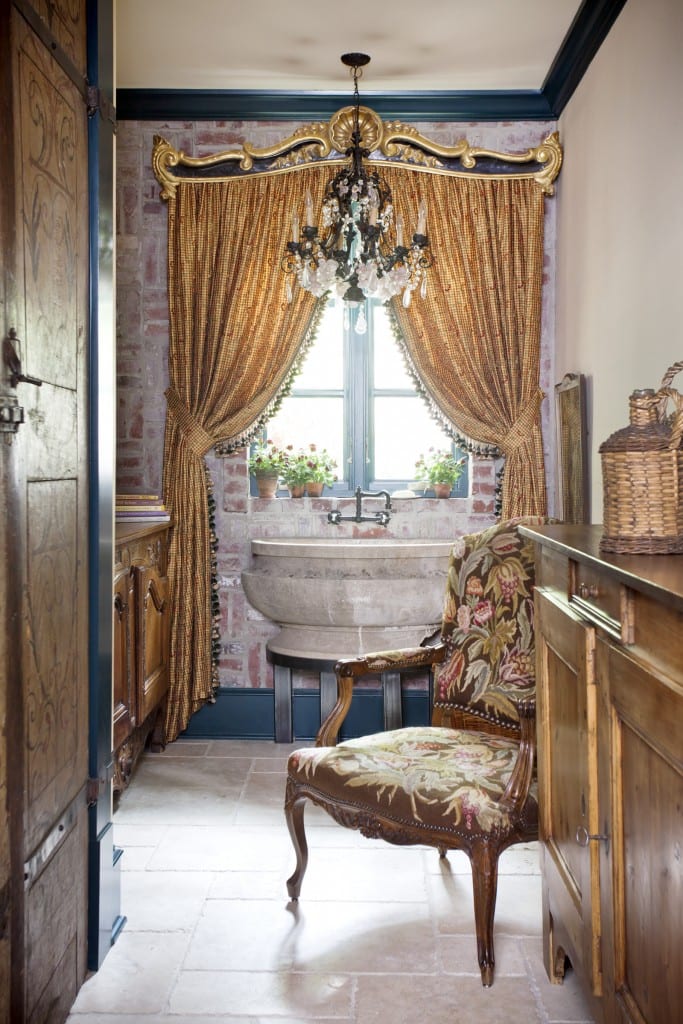 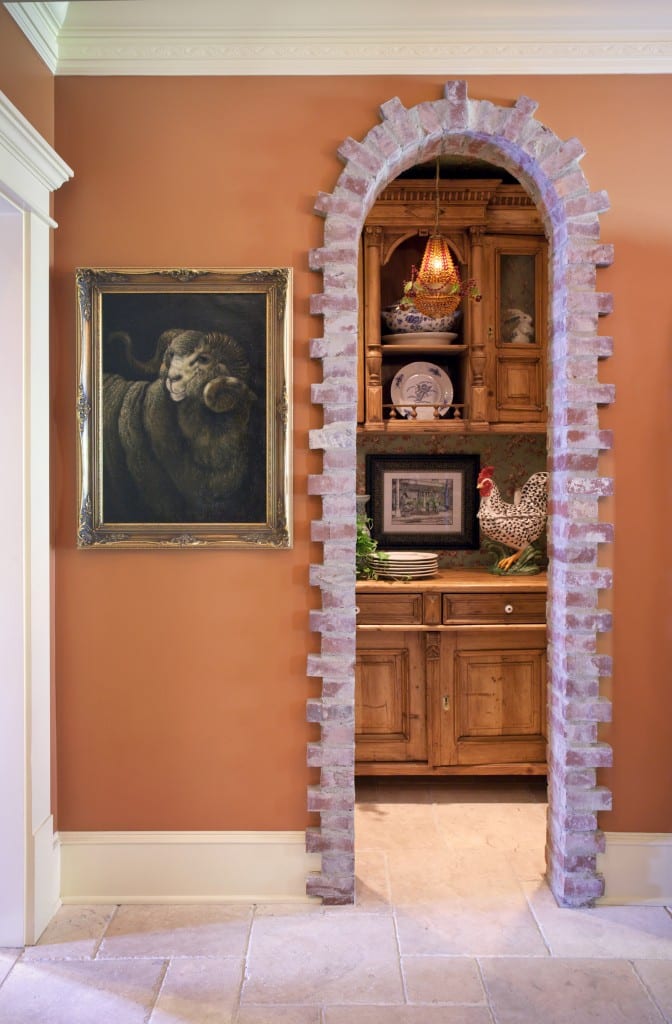 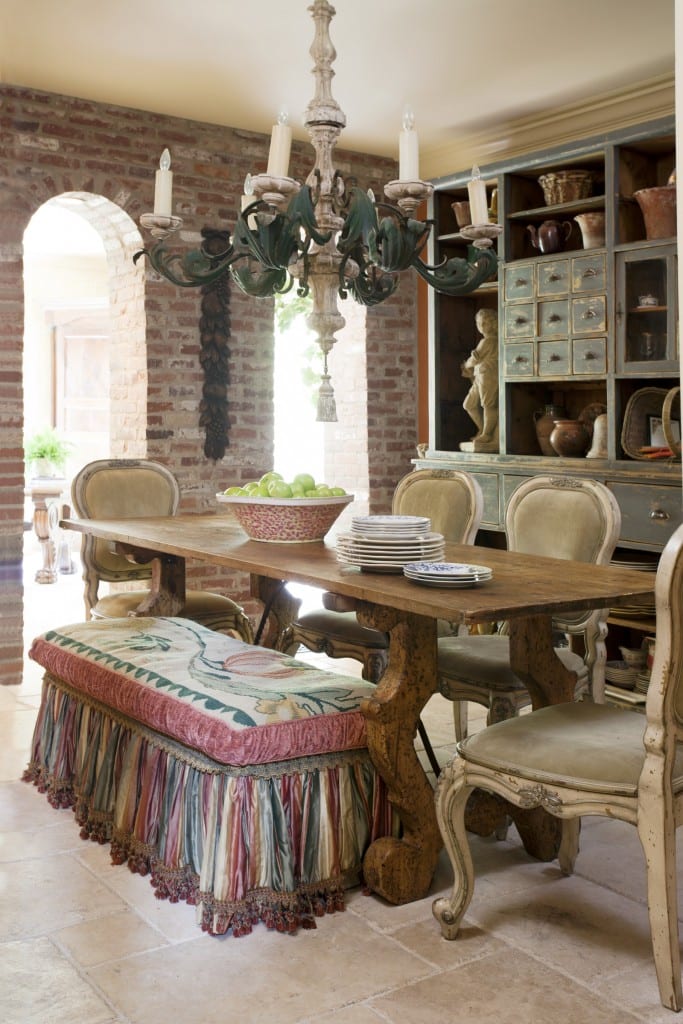 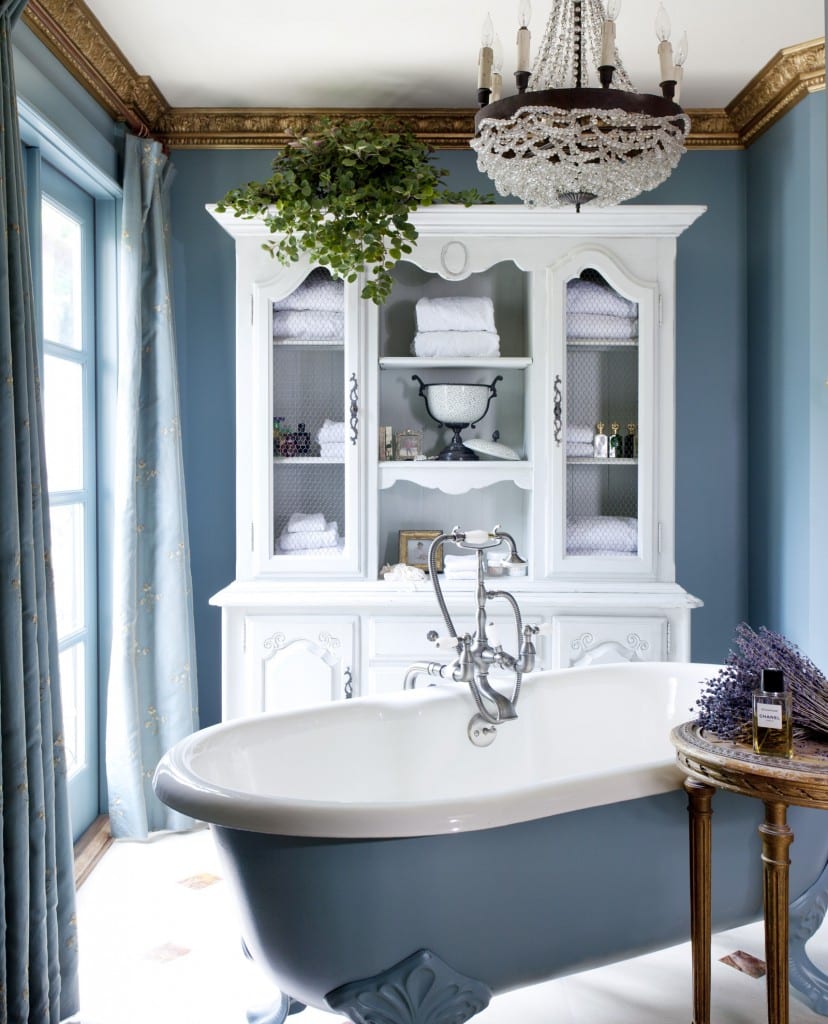 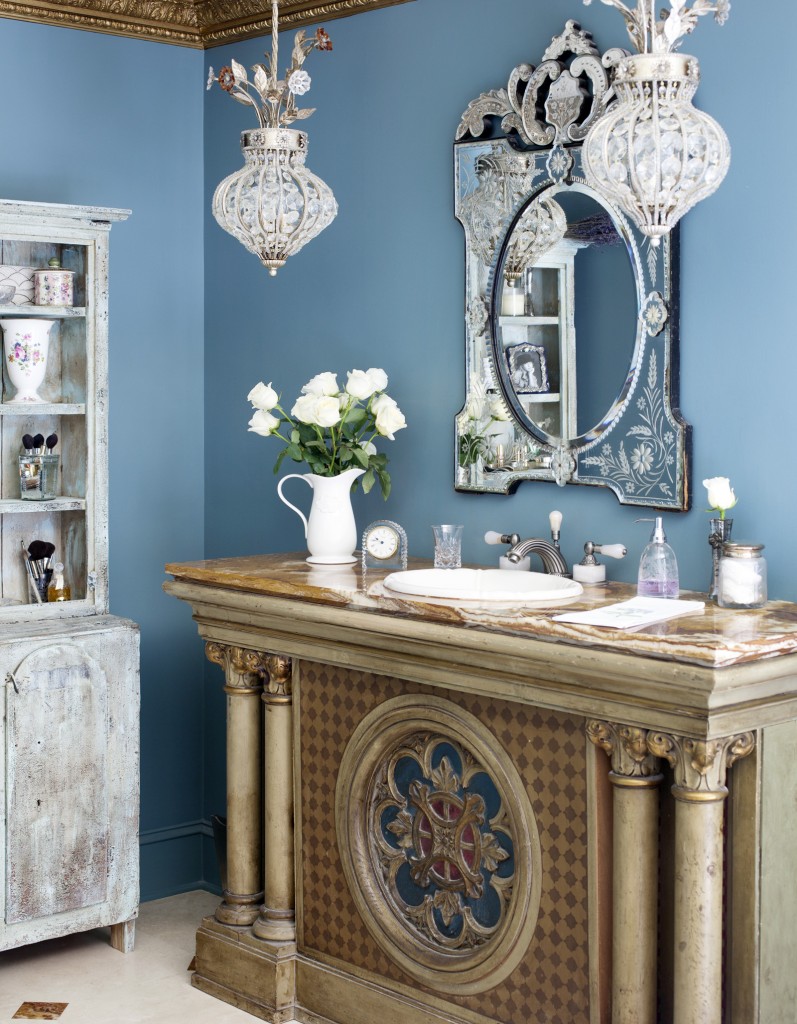 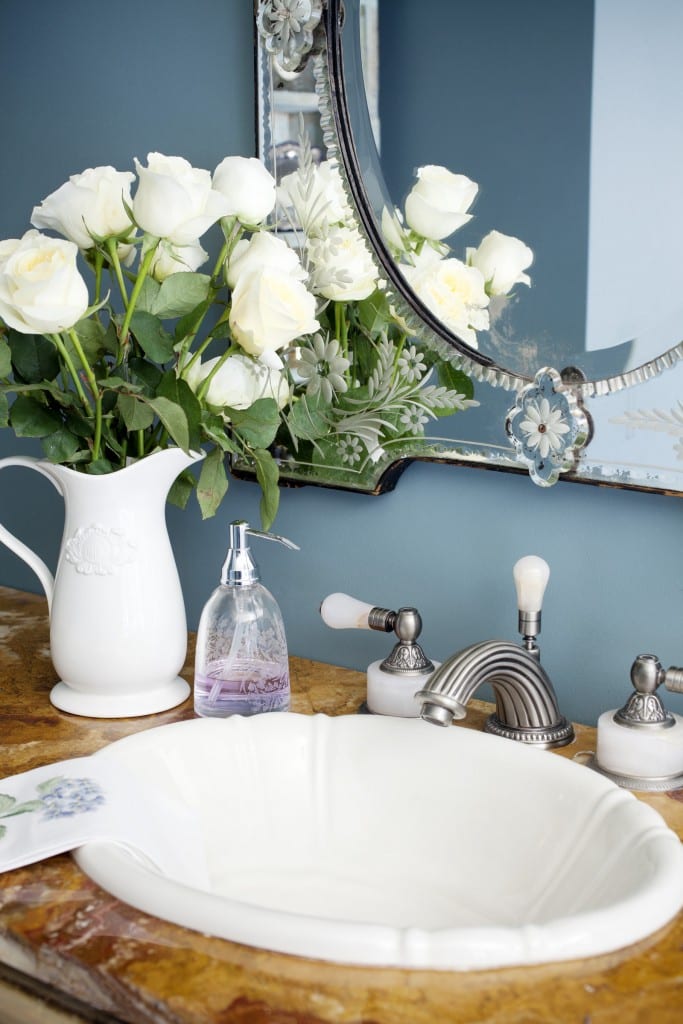 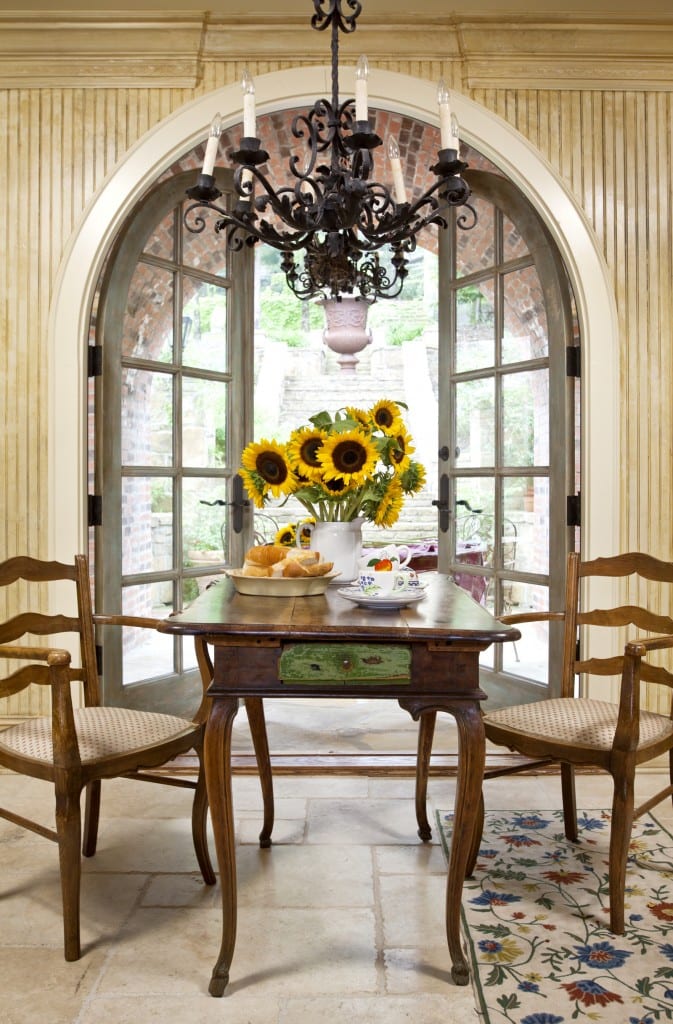 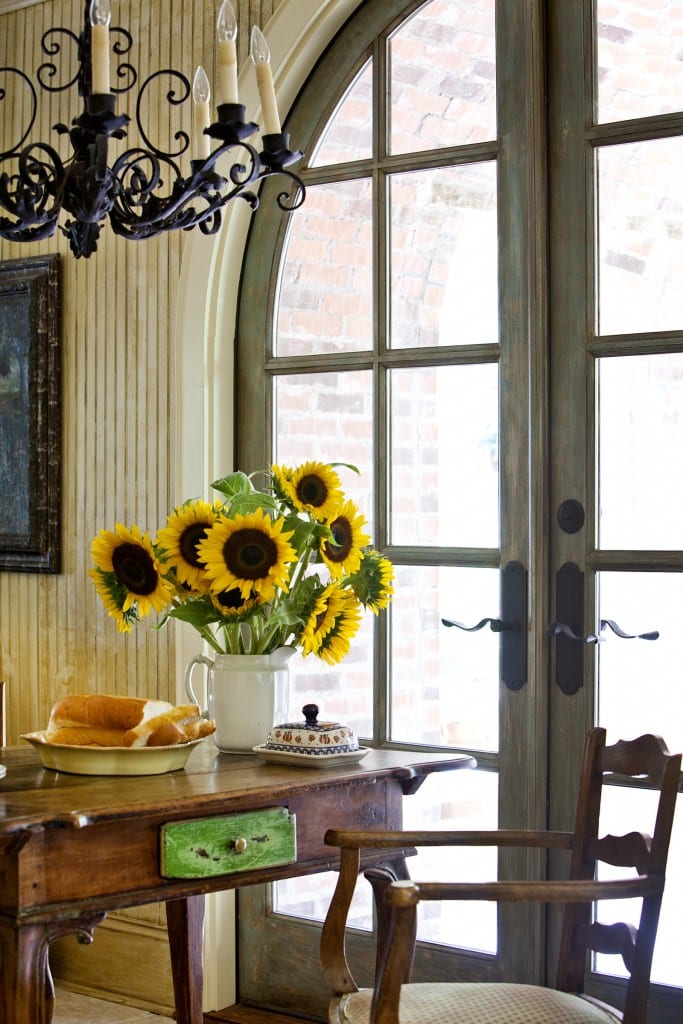 AHIA: What was the style of the home originally?

RM: Very 1970s, with low ceilings and small rooms. We didn’t change the height of the rooms. What we did change was pretty much everything else. We started with color. The homeowners wanted something European, and we wanted it to be, for the most part, more country feeling. It looks like an English country house with French overtones. We used architectural elements and, in the kitchen in particular, they challenged us to create a space that wasn’t ordinary.

AHIA: The European country house feeling seems to carry over from the kitchen to the bathroom as well.

RM: We try to design so that you could take a chair out of any room, place it in another, and it would still work, color-wise. We also try for our designs not to be dated. If you stick with the classics, just like a good black dress, you’re going to be safe.

AHIA: What dates a house?

RM: Color, trendy things and even floor covering. In the bath, we did limestone floors, but in a different way by insetting red Indian onyx. That red shows up in the French gothic revival altar from Avignon, which we used as a vanity.

AHIA: You used an interesting cabinet in the breakfast room as well—it’s a showstopper.

RM: It’s from an old dry goods store in Eastern Europe, and the whole space came together around it. We wanted to complement the blue, which is how the terracotta in the kitchen came about. Then we found the Portuguese rug ottoman, the farm table, and the Swedish grandfather clock, which has blue. The blue just started coming into play.

AHIA: What about the old wives’ tale that big pieces make a room feel smaller?

RM: When rooms are small, with no natural light, you have to push the envelope with scale. If you have something in a small room that’s massive, it reads “big” and it can make it look less busy.

AHIA: The gilded molding adds a regal quality to the bathroom.

RM: Many of the pieces we found were gilded and dark cerulean blue. From that, the homeowner wanted the space to be more like a chateau, a little more elegant. That gilding is something that’s just very French.

AHIA: Love the freestanding bathtub, set at an angle.

RM: We wanted it to appear old, as if it needed to be filled with water by hand. And the faucet is in the middle so you can lie on either end of the tub and look out over the balcony. That allowed us to take advantage of the wall space and to approach the bathroom in a different way. If it were my house, I’d enjoy a glass of wine there every evening. 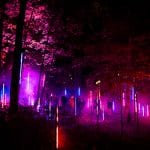 North Forest Lights, a temporary installation at Crystal Bridges Museum of American Art, is back for a second season at the Bentonville museum. In partnership with Montreal-based multimedia studio ...

END_OF_DOCUMENT_TOKEN_TO_BE_REPLACED

The Black Interior Designers Network has launched a campaign detailing ways for the home design industry to become more diverse and inclusive. The strategy is two-fold: First, the nonprofit ...