The talents behind beloved Arkansas eateries such as Local Lime, Big Orange, and ZAZA, step onto the craft beer scene with a brewery and taproom in Little Rock—known as Lost Forty—that’s sure to become a new favorite hangout 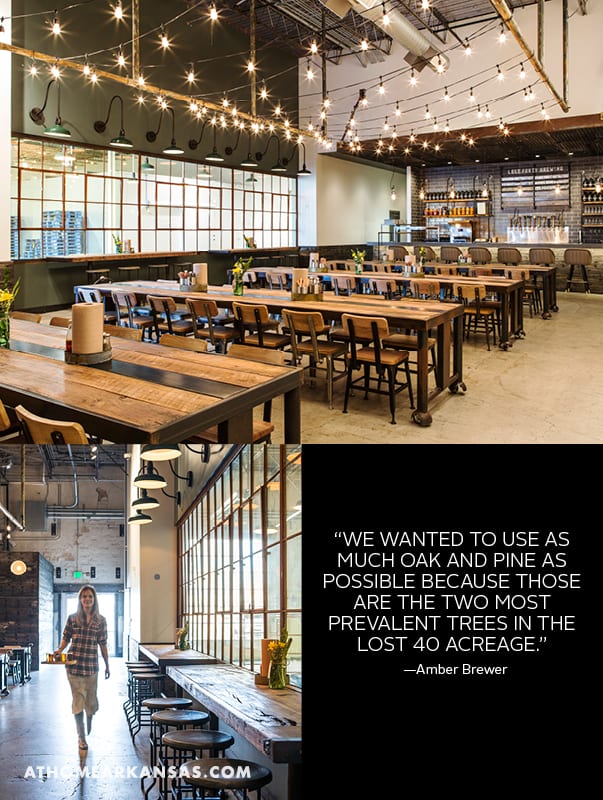 When you put Scott McGehee, John Beachboard, Russ McDonough, and Amber Brewer in one room, there’s bound to be something brewing. This time, the quartet behind some of central Arkansas’s favorite restaurants—who were joined by local businessman Albert Braunfisch for this venture—cooked up the idea to open a brewery and taproom known as Lost Forty Brewing. John and head brewer Dylan Yelenich actually started the brewing in John and his wife Amber’s garage. “They were having so much fun creating beers and new flavor profiles, they began to think about a large scale brewery,” says Amber, who serves as creative director of Yellow Rocket Concepts, a parent company for the group’s local eateries. “Scott and John and our team are seasoned in pleasing the palates of Arkansans with unique food and cocktail creations. Beer has always been a passion for them both, which led to learning to home brew, and now here we are. At Lost Forty, the taproom is a function of the brewery. It is a place for people to try what we are creating, where we are creating it, alongside food that highlights the attributes of the beers. Drinking in the taproom is akin to being in our lab,” she adds. 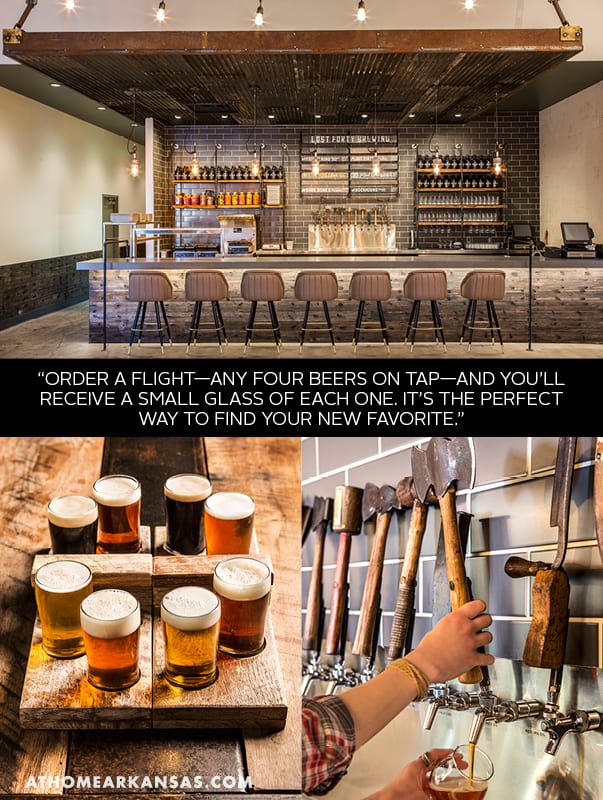 Lost Forty Brewing takes its name from 40 acres of virgin timber in Calhoun County, Arkansas. “Since we are all rooted in Arkansas and love our ‘natural state,’ we wanted to have a name that was representative of that,” Amber says. The story behind the existence of the Lost Forty reads like an Arkansas folktale: it’s got a little history, a little fiction, and a whole lot of hearsay. The legend goes that sometime during the great timber boom in Arkansas, land was being acquired very rapidly for clear cutting. When a local timber corporation obtained this particular plot of land for harvest, the survey provided by the landowner was mapped incorrectly. After years of failing to be marked for cutting and subsequently not cut, this swath of old-growth timber stood out to the local community and timber company as something special. The land was then placed in a trust by a timber company. Today, this property is home to the oldest and largest Loblolly Pine in the United States. The land is on a list of areas of interest in Arkansas and is co-managed by the Arkansas Natural Resources Commission (ANRC). In an effort to benefit and preserve their namesake forest and its history for future generations of Arkansans, Lost Forty Brewing, in conjunction with the ANRC, is creating a foundation that will be known as The Lost Forty Project. Proceeds from special events, artwork, and runs of limited edition beers will benefit the ANRC’s mission of preserving important natural places in Arkansas. 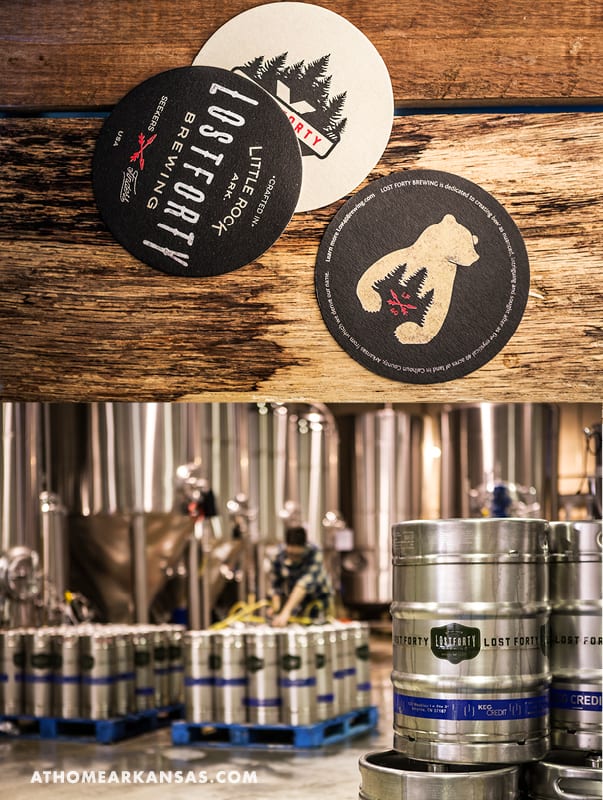 THE DECOR AND DETAILS

“You can’t fight a warehouse. I think it’s important to take note of where your space is located and the nature of what goes on in it. For us, we are in a warehouse in an industrial district, producing beer on a large scale, so I didn’t want to lose the element of industry and production that is inherent to this particular business and the area,” says Amber, who envisioned the identity of Lost Forty and designed the entire space. Pipework along the ceiling alludes to the plumbing lines necessary for a working brewery, while the awning over the bar was inspired by similar versions seen on buildings throughout the area. Factory-style windows—which were part of a firehouse in Pennsylvania and are one of the only things that did not come from Arkansas—allow customers to view the inner workings of the brewery, while enjoying a taste. Working with local craftsmen, she made every effort to use Arkansas-sourced and reclaimed materials. For example, other than the chairs, every piece of metal was either leftover from construction or was scrap metal. The tables and wall planks also bear testament to the brand’s roots. “We wanted to use as much oak and pine as possible because those are the two most prevalent trees in the Lost 40 acreage.” Small details including taps made from vintage woodworking, tree trimming, landscaping, and meat trimming tools, reinforce the industrial/lumberjack vibe. 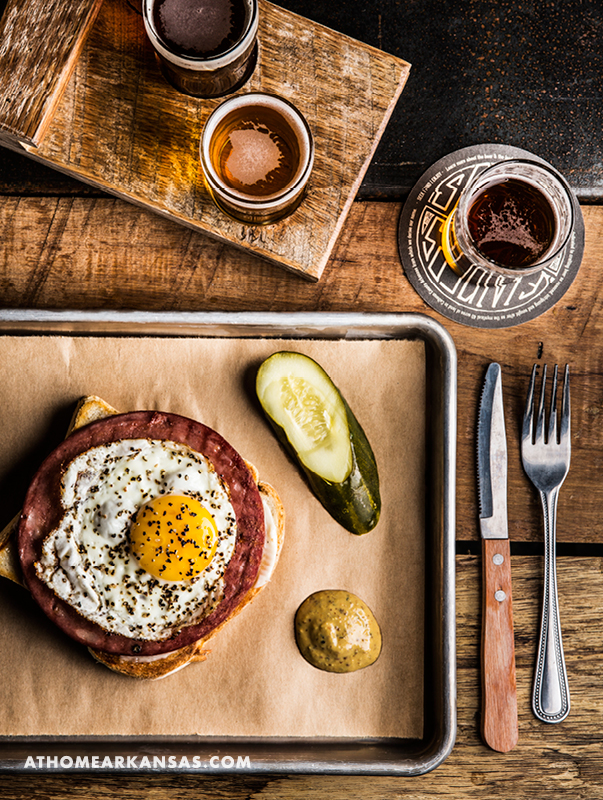 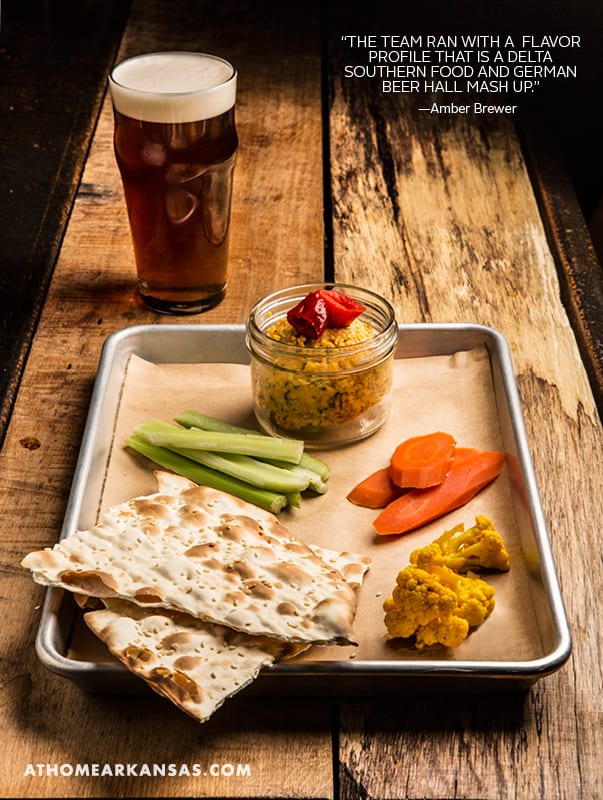 As for the fare, Amber says the team ran with a “flavor profile that is a Delta Southern food and German beer hall mash-up,” meaning you’ll find dishes such as Gulf Shrimp Gumbo alongside House Made Smoked Kielbasa on the menu. What’s more, the food is as much of an art form as the beer. All of the sausage is made in-house, the pickling is done onsite, the brisket is smoked there, and local bakeries even use Lost Forty’s leftover grain in some of the breads they bake for the taproom.

Finally, when it comes to the main attraction, on any given day, you can refresh your palate with the brewery’s four year-round beers—Love Honey bock, Bare Bones pilsner, Lost 40 pale ale, and Rockhound Imperial IPA—along with other seasonal offerings. If you’re lucky, you might catch them on a day when brewmaster Omar Castrellon is creating pilot batches, which are brewed and served to get feedback from patrons before brewing large-scale batches. “When patrons join us in the taproom, they become collaborators as well as guests—they are in our lab in a sense. All are invited to drink, eat, enjoy themselves, and give feedback about what they would like to see next. Taprooms are a critical part of engaging craft beer enthusiasts as well as newbies. The more energized Arkansans are about great local beer, the more Arkansas’s craft beer culture grows as a whole,” Amber says.