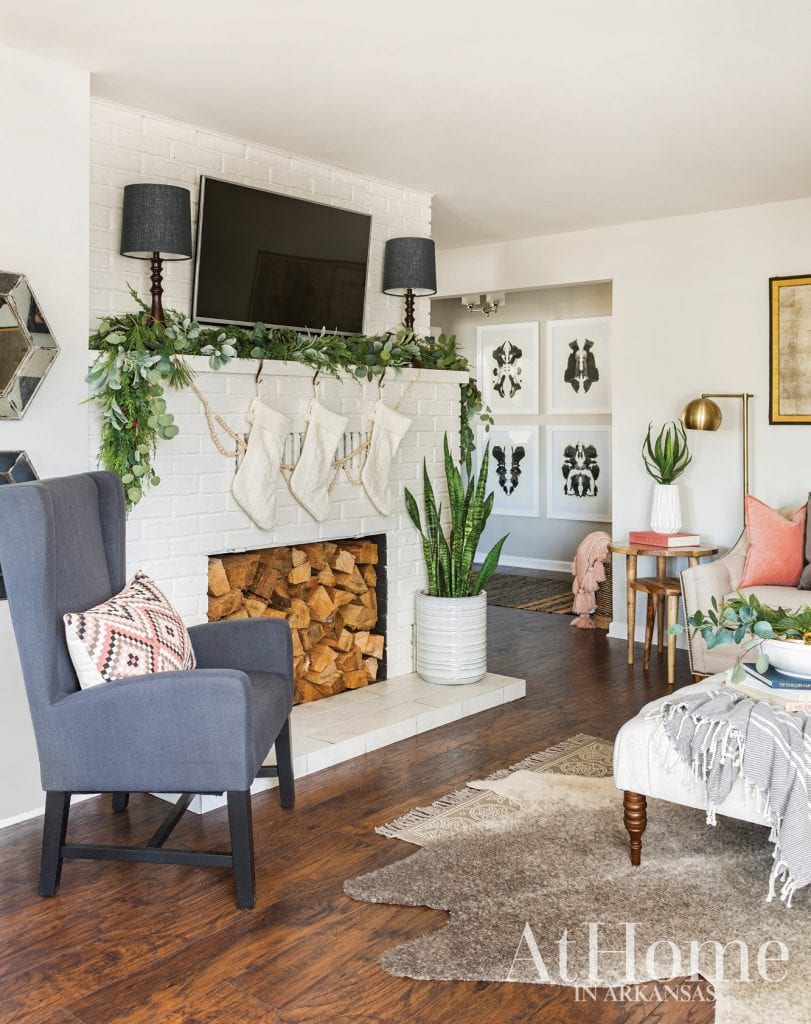 When Megan and Austin Gilliam found a 1970s foreclosure in their hometown of Mountain Home, the couple jumped at the chance to purchase and renovate it. Fueled by their creativity (Megan is a wedding photographer and Austin a videographer), the pair took the home down to its studs in many places and put in countless hours to make it reflect their style. “It was really a labor of love and a big learning process for us,” Megan says of the experience.

For starters, they traded browns and golds—a classic mid-century pairing—for whites and grays. “I don’t know if it’s the photographer in me, but I really like a neutral base and for all of the rooms to flow together with a light and airy feel,” Megan says. They also painted the exterior’s red brick white, installed new flooring, and opened up a few walls to improve the line of sight from room to room, which proved to be especially useful when their daughter, Emma, arrived in 2016, soon after the renovation. 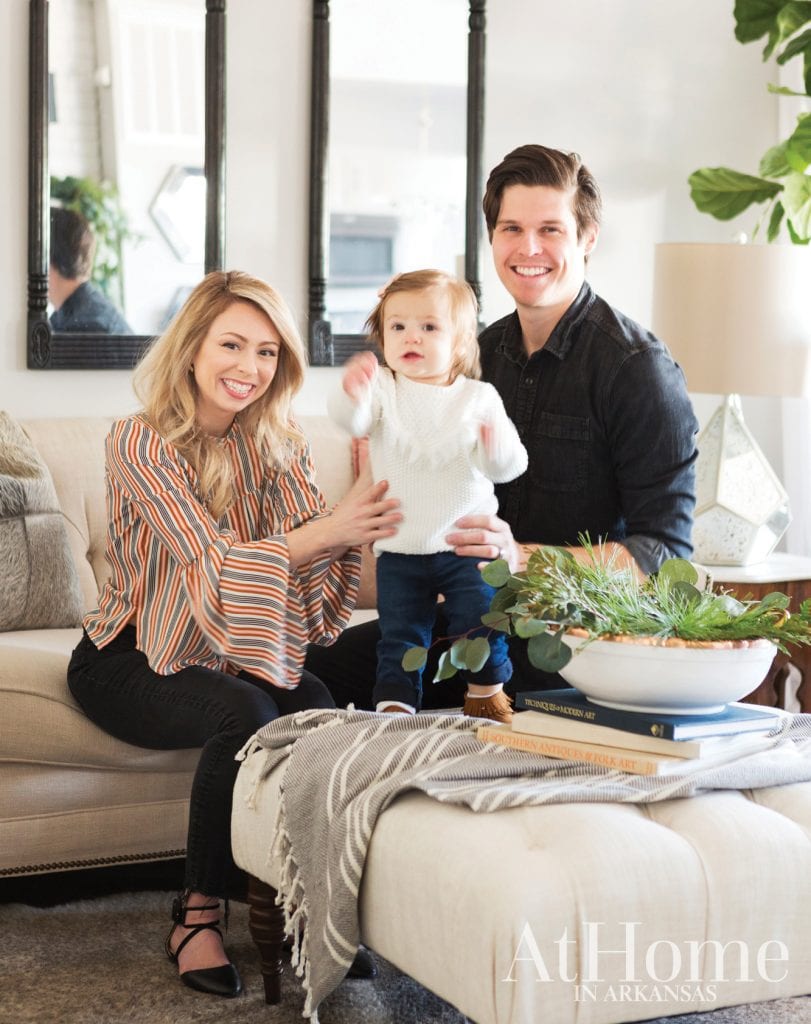 With good bones in place, they set out to adorn the space with meaningful pieces as well as a mix of design elements. For example, Megan’s photography can be found in the nursery, while inkblot prints she created during her pregnancy greet guests in the front entry. “My style is constantly evolving. I would say it’s eclectic; there’s some boho, some modern, and a little traditional,” Megan says. “I like a lot of different styles, and I think I’ll be happy for longer when I blend them.”

Before they were parents, Megan says she and Austin didn’t spend a lot of time decorating their home for Christmas. However, now that they are a family of three, she goes all in to create a festive atmosphere. “When Emma was born, I wanted to start these traditions for her,” she says. “I also wanted the holiday décor to go with our house.” Loads of greenery—both fresh and faux—flow from room to room, much like the airy palette. The result is a home that’s streamlined and inviting for everyday living as well as perfectly complemented with an understated air of seasonal flair. 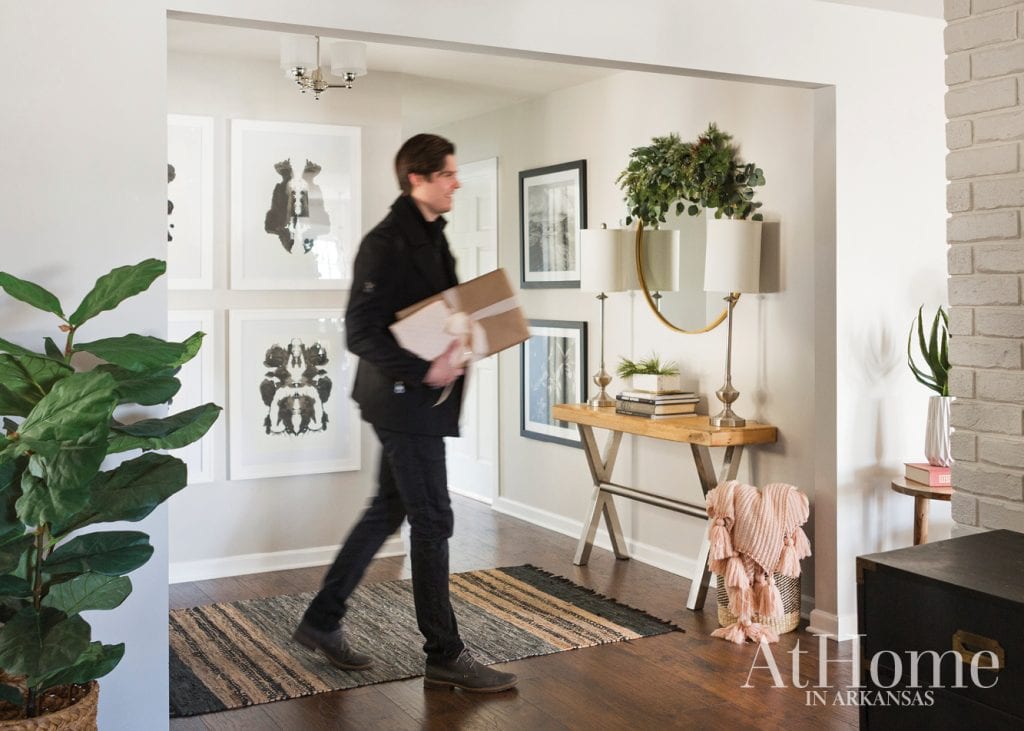 The inkblot prints in the entry (seen at left) as well as the photographs seen in Emma’s nursery are available for purchase online in Megan’s Etsy shop, AutumnAndEmma. 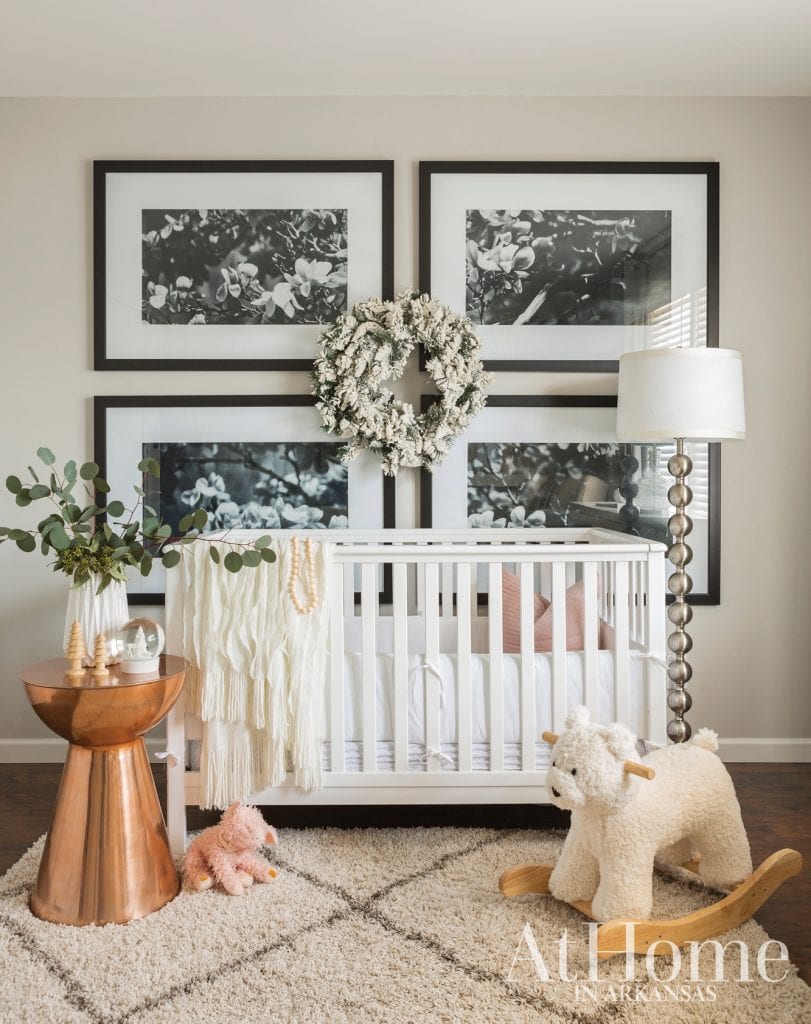 Neutral Nursery
“I didn’t want her room to be over-the-top,” Megan says of Emma’s nursery. “I wanted it to be a space that could evolve as her personality developed.” Starting with a white crib set against a light gray background, Megan added in personal elements. For example, the quartet of black and white images of dogwood trees are photographs Megan took while attending Arkansas State University. “I had randomly taken these and never thought I would use them in my daughter’s nursery, but I love them here,” she says. A flocked wreath dresses up the space for Christmas while coordinating with the soft, fresh feel. 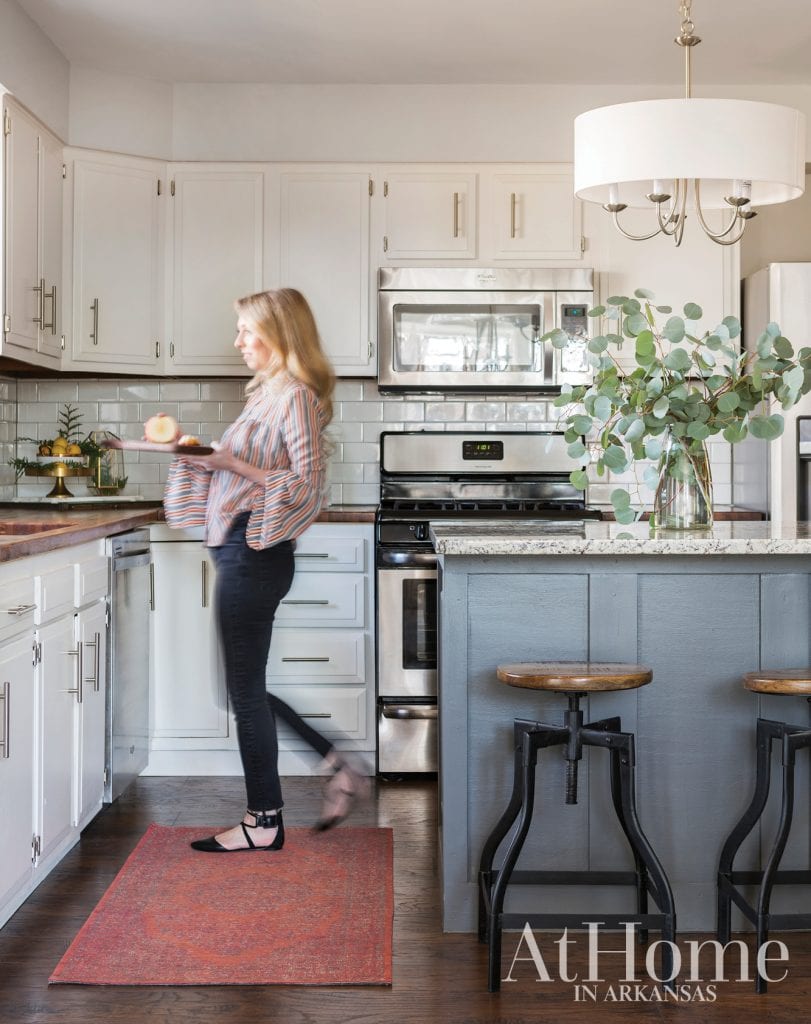 Simply Chic
In the kitchen, a wall was removed to allow for a reorganization of the space. However, the homeowners were able to use the original cabinetry, refreshing it with paint and new hardware. A large island was added to create a space for casual meals as well as storage. A mix of stained butcher block and granite countertops keeps with the down-to-earth vibe. Fresh lemons and greenery are festive additions that don’t feel overly holiday specific. 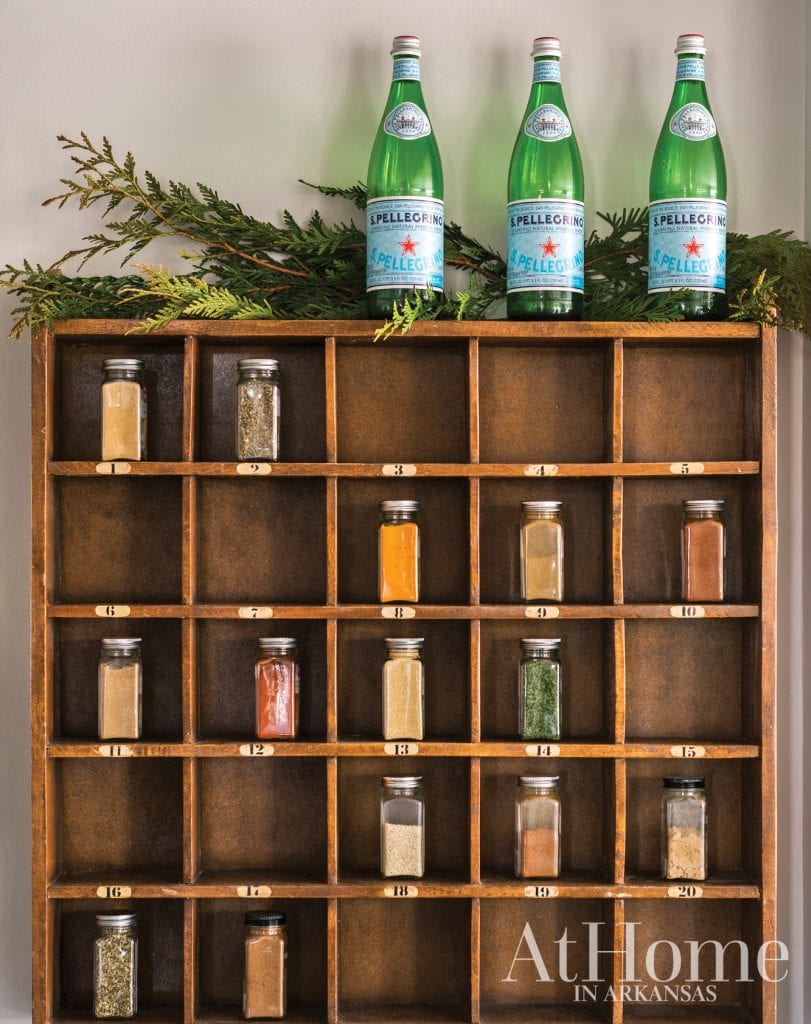 “I like a lot of different styles, and I think I’ll be happy for longer when I blend them.”
—Megan Gilliam, homeowner 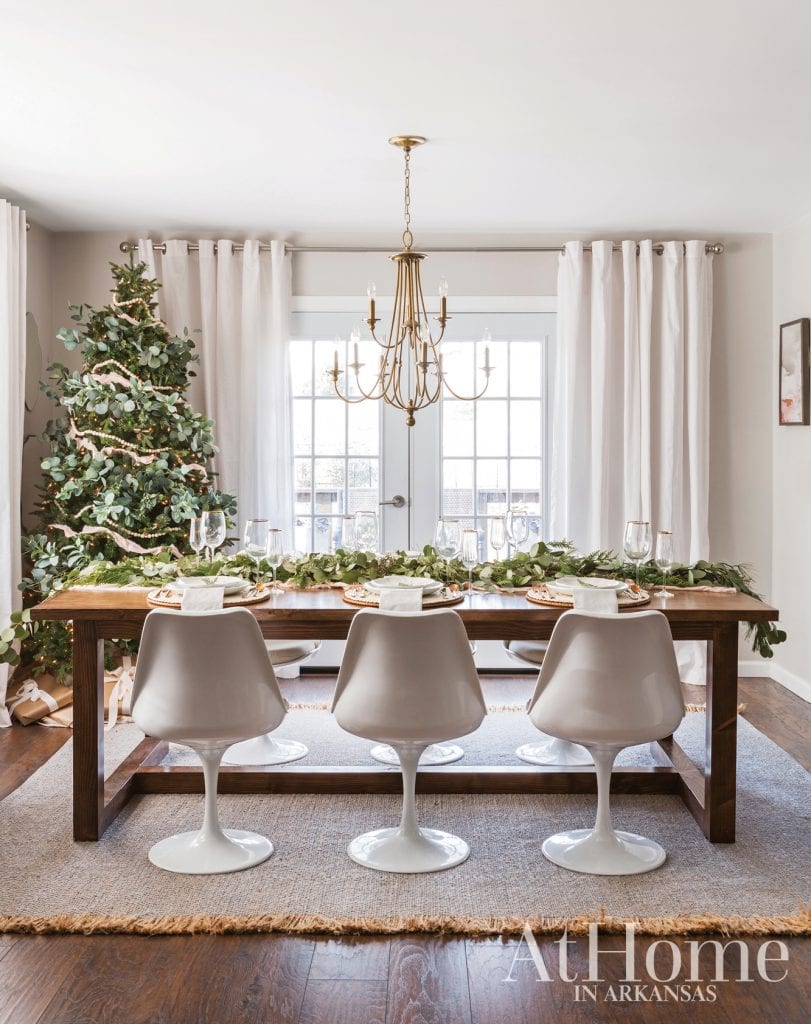 Dining Dressed Up
During the renovation, Austin discovered his talent for woodworking, which led him to design and build the family’s dining room table. Megan paired it with mod chairs for an eclectic feel. “I felt like the retro element was one I hadn’t brought into the home, so I wanted to add that somewhere, and I’d already had these chairs for a few years,” she says. The chandelier was a clearance find at Home Depot. “We are a young family, and we are budget-conscious, so I look for deals—but I also make sure the pieces match my style,” Megan says of the simple brass fixture. 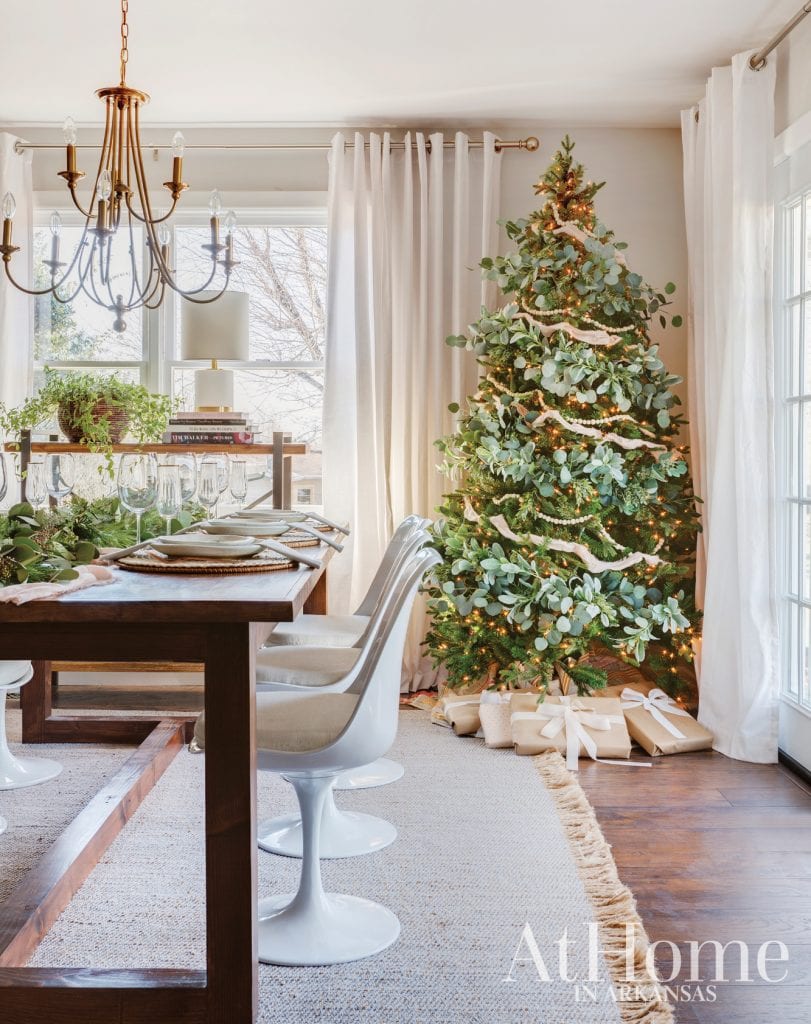 The Gilliams decorated their faux Christmas tree with sprigs of fresh eucalyptus arranged in a garland-like fashion. Rather than ornaments, they cut a pale pink scarf into strips and mixed it with strands of wood beads for an understated look that complements the home’s style. “The amazing smell was definitely a benefit of the eucalyptus!” Megan says. 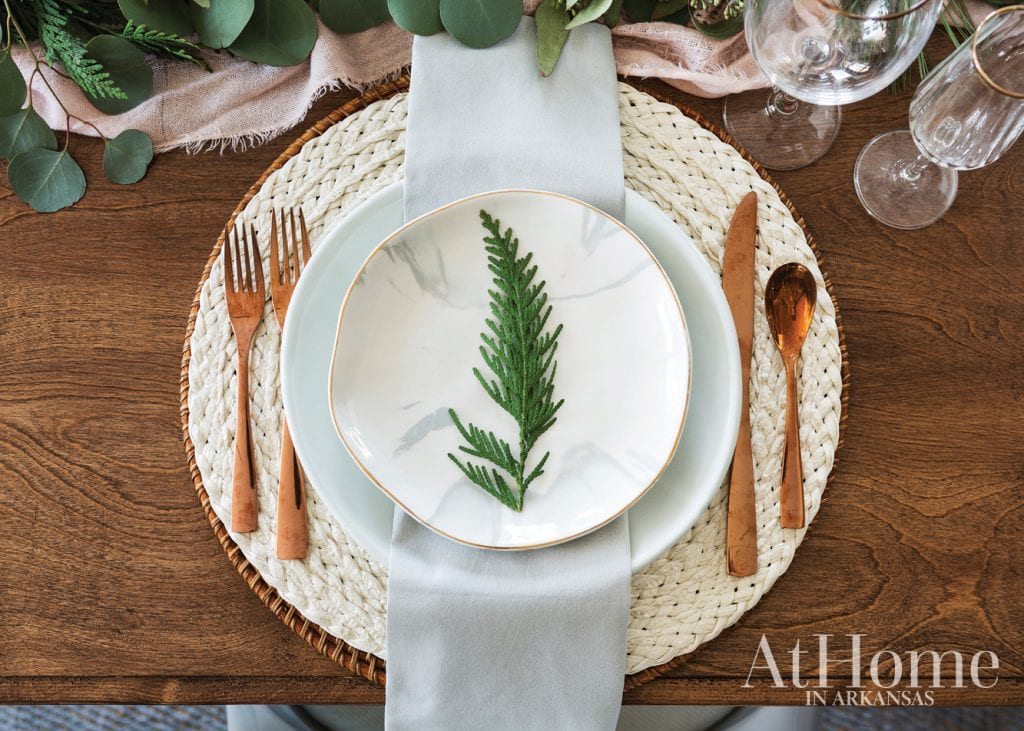 The place settings around the table were created with pieces collected over time. The same pink scarf fabric seen on the tree creates a runner along the center of the table. 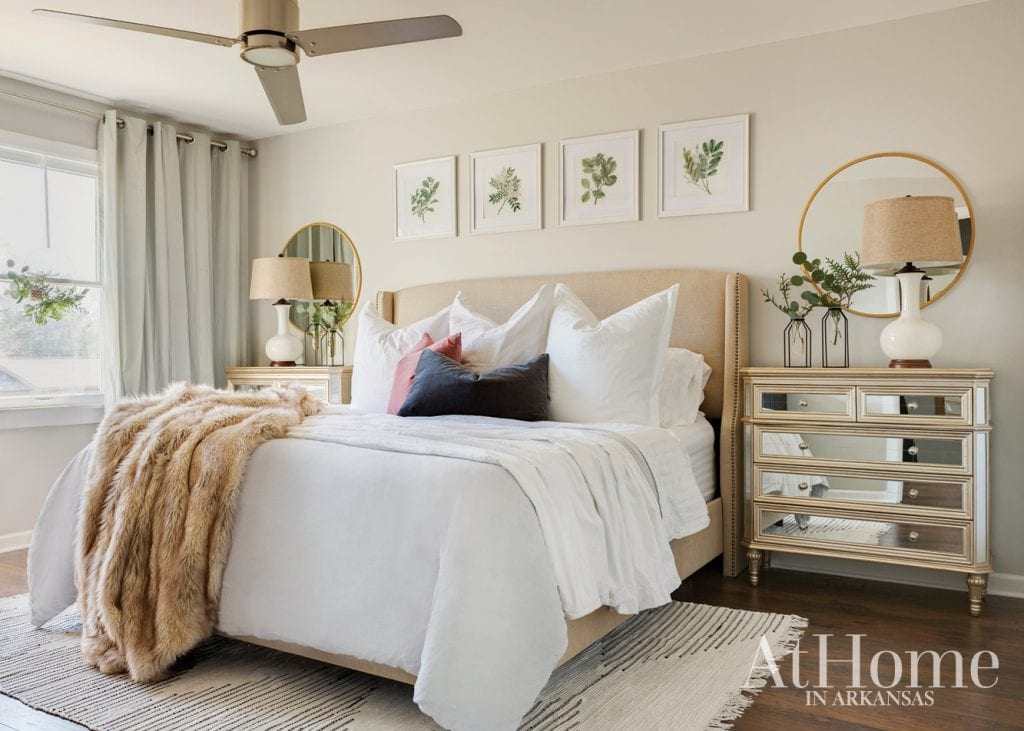 Classic & Calm
When the Gilliams bought the house, the master bedroom was a vision with brown carpet and yellow floral wallpaper. Wood flooring and a palette of white and gray replaced these elements during the renovation. “I like bedrooms to feel calming, so that was one of the reasons I chose white and gray,” Megan says. Wall-to-wall curtains frame standard size windows, giving the illusion of a floor-to-ceiling view. Elements such as the faux fur throw and tweed lampshades balance the room’s blend of masculine and feminine.

Megan found classic white frames at Hobby Lobby. She replaced the prints inside them with greenery images from Etsy more suited to her style. 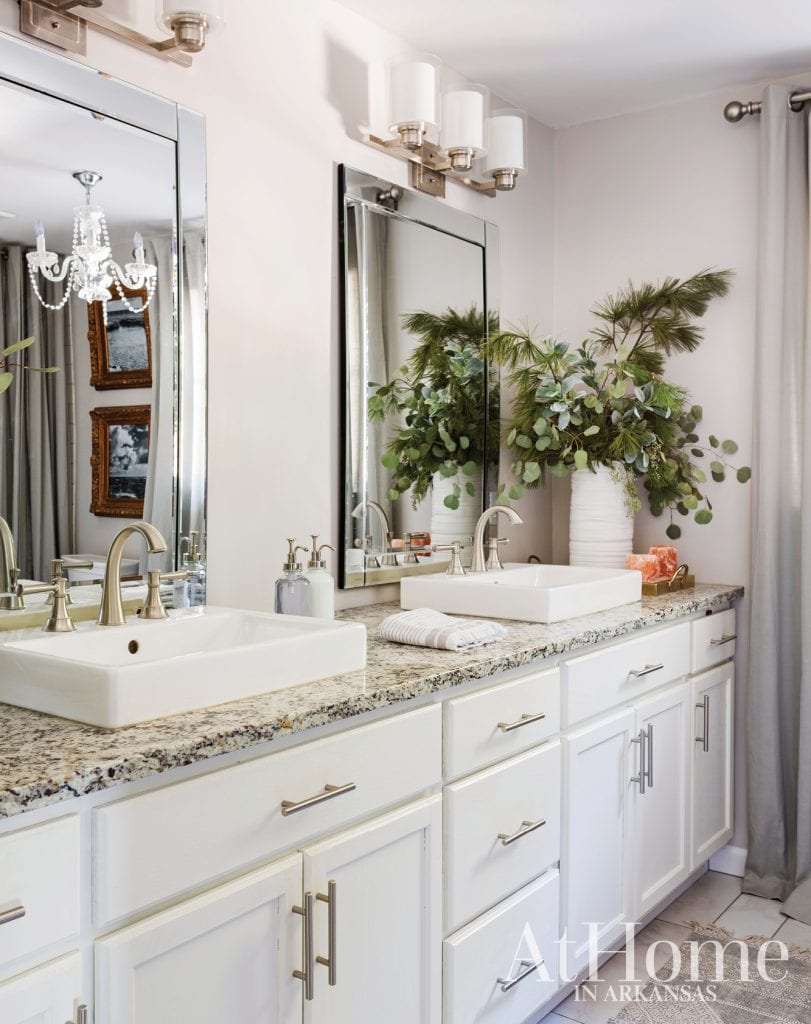 Functional Update
The master bath, which formerly had carpet underfoot, received a complete makeover. Closing up a linen closet allowed for the addition of a second sink area, while new cabinetry and granite countertops made the room cohesive with the redesign seen throughout the rest of the home. Megan clipped pine from her yard and mixed it with eucalyptus to create a vase with just the right balance of holiday style.