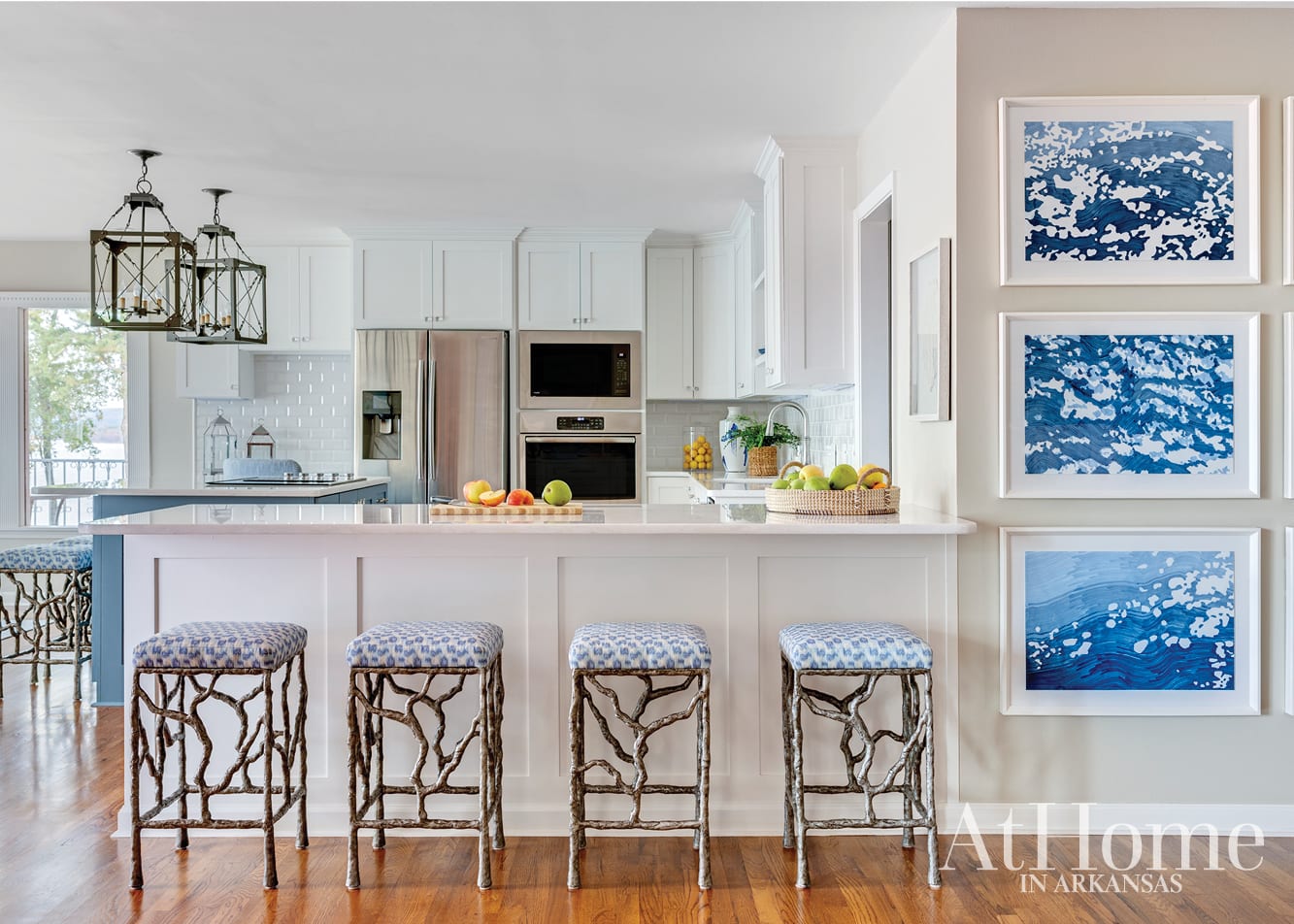 When Shayla Copas of Shayla Copas Interiors first started talking with the owner of this home about plans for a renovation, she soon discovered his children were the motivation for the project. “The husband spent a lot of time as a child in Heber Springs, and this was an area where he had great memories,” Shayla says. “He and his wife wanted to and a home on the lake where they could bring their kids and pass down those memories through the generations.”

Turns out finding a house would be the easy part; the work would come in making it their own. They settled on the first house they looked at, immediately falling in love with its location and view. However, its existing style and layout needed to be brought up to date. That’s when the couple called on Shayla to help create a home that would be as comfortable for entertaining friends as it is for the family of four.

One of the most dramatic aspects of the renovation involved removing a wall between the kitchen and dining room. “When you were at the stove cooking, you’d be looking at a wall instead of out at the view. That wall had to come down so you could see the water,” Shayla says. She also notes another wall between the kitchen and living room was removed to make the space more open and livable.

The end result is exactly the Greers Ferry retreat the homeowners had hoped for—and to top it all off, they have what Shayla calls one of the best views in the state. “When we did the install the very first evening, it was emotional when I saw the sun go down,” she says. “I couldn’t believe they get to relax and spend time with their family there. I would say it’s one of the prettiest locations in Arkansas.” 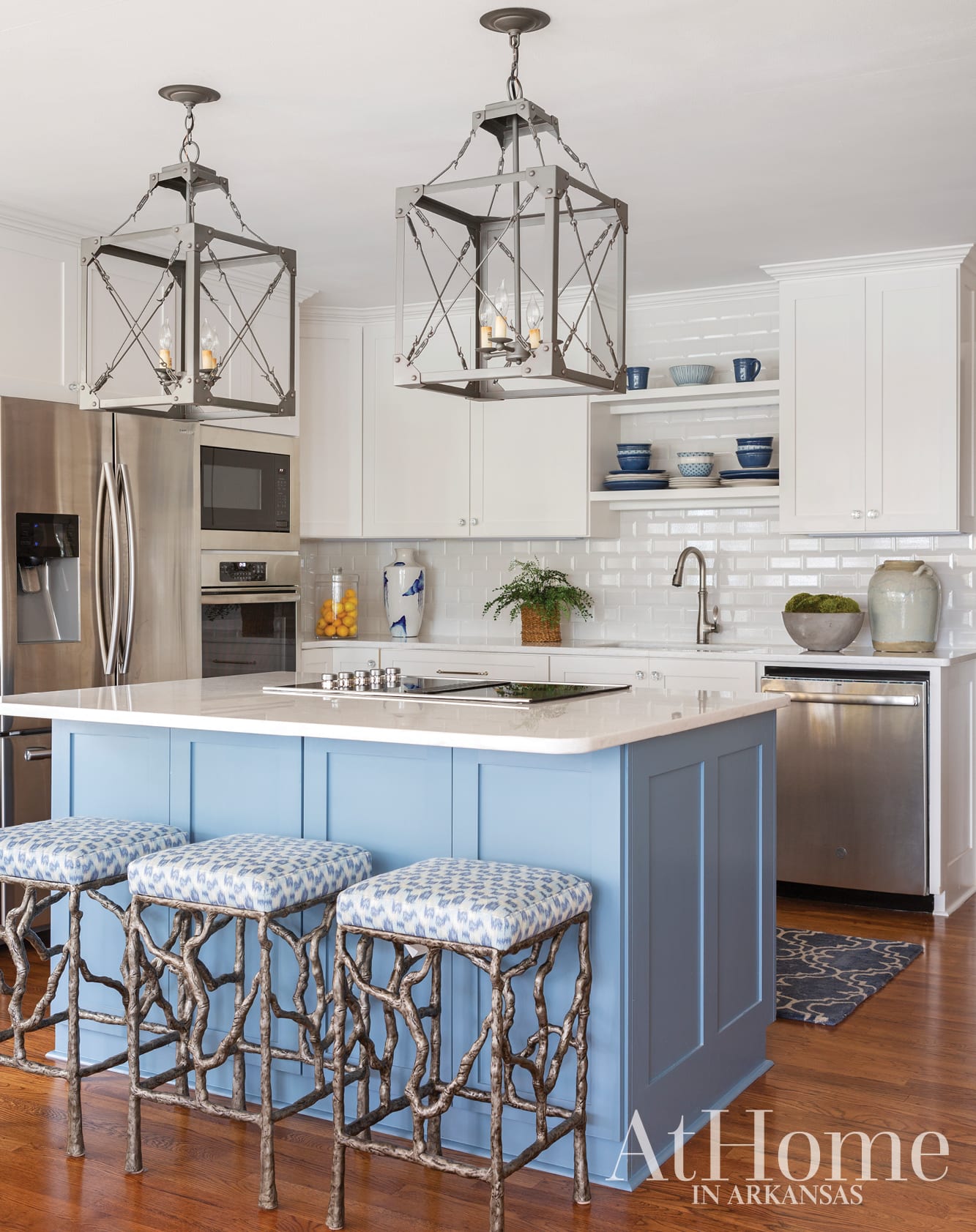 NATURAL FEEL
Throughout the home, Shayla chose details that would hint at Mother Nature’s presence right outside the windows. Case in point: The branch motif in the kitchen barstools. “Because this is a lake house, I wanted to put in some furnishings that had an organic feel,” Shayla says. Additionally, the pendants above the kitchen island are reminiscent of nautical lanterns and artwork depicting beach landscapes and waves are prevalent. 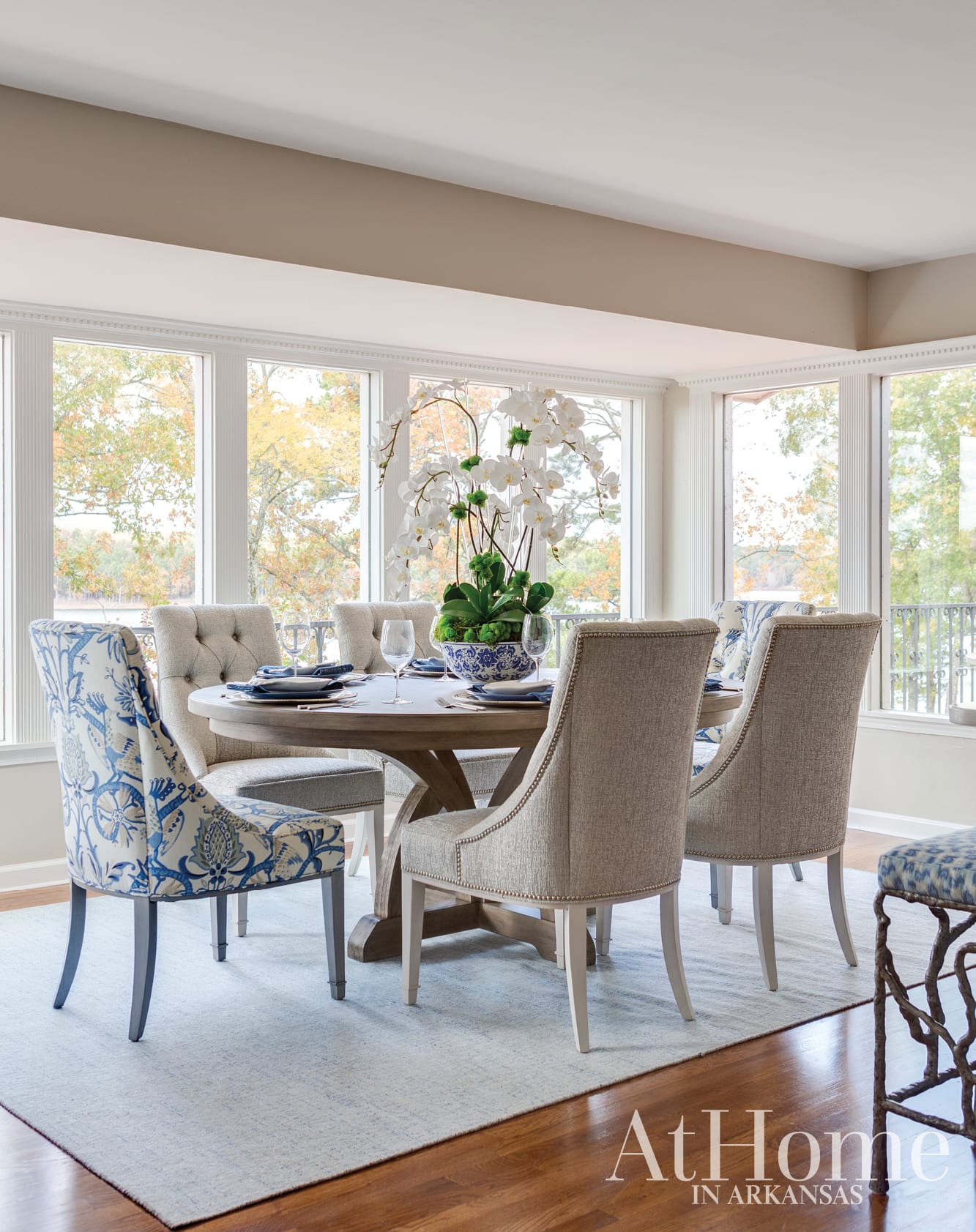 PEACEFUL PALETTE
Since Shayla and her team opened up the layout of the home significantly, she kept the palette clean and cohesive with creamy neutrals and blues throughout. “The homeowners gravitate toward blues—any shade of blue,” Shayla says. “They also love neutrals, so the walls are a very light taupe, and the blues kind of pop off of that color. I suggested we paint the island and the cabinets in the butler’s pantry blue to add some areas of interest.” 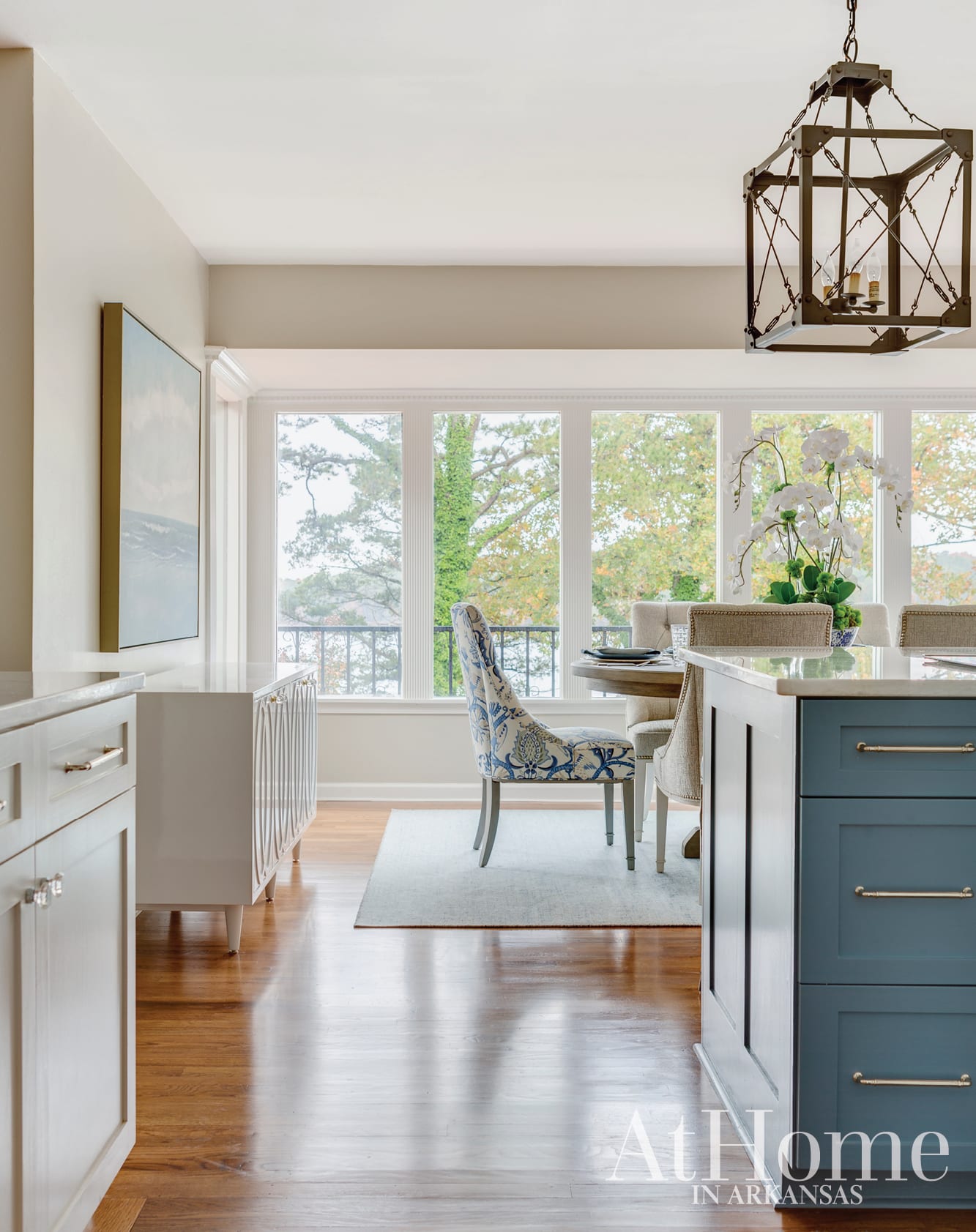 ROOM WITH A VIEW
Keeping in mind the way the family would use the house, Shayla used Crypton and performance fabrics wherever possible. “I wanted it to be functional,” she says. In the dining room, host and hostess chairs covered in Thibaut’s “Peacock Garden” as well as the rug are specially treated to prevent damage from both stains and UV rays. 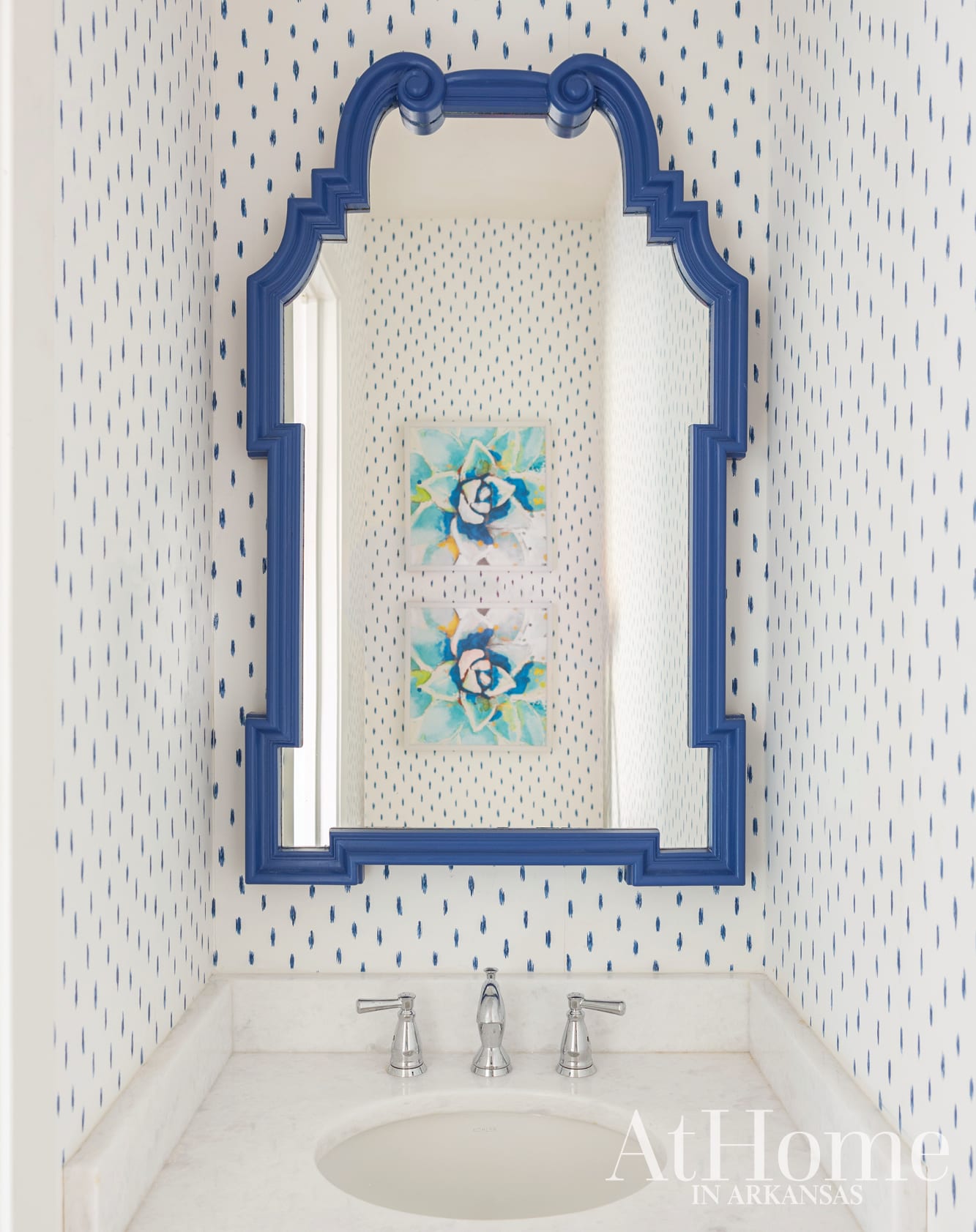 THOUGHTFUL RENOVATION
While several walls came down in the kitchen, Shayla tried to work within the confines of the original layout throughout the rest of the house. “When I renovate, I like to and a couple of things we can keep in place,” she says. “That gives them a story and a connection to the history of the home.” A small powder bathroom (above) is a great example of this resourceful thinking: “There was already a vintage cabinet the previous homeowners were using as a vanity, so instead of taking that out and having a new one made, we decided to just paint it,” she says. “That and the mirror were in perfect shape; they just needed to look fresh again.” She also installed wallpaper, new hardware, and a pair of happy paintings for a cheery, eye- catching room. 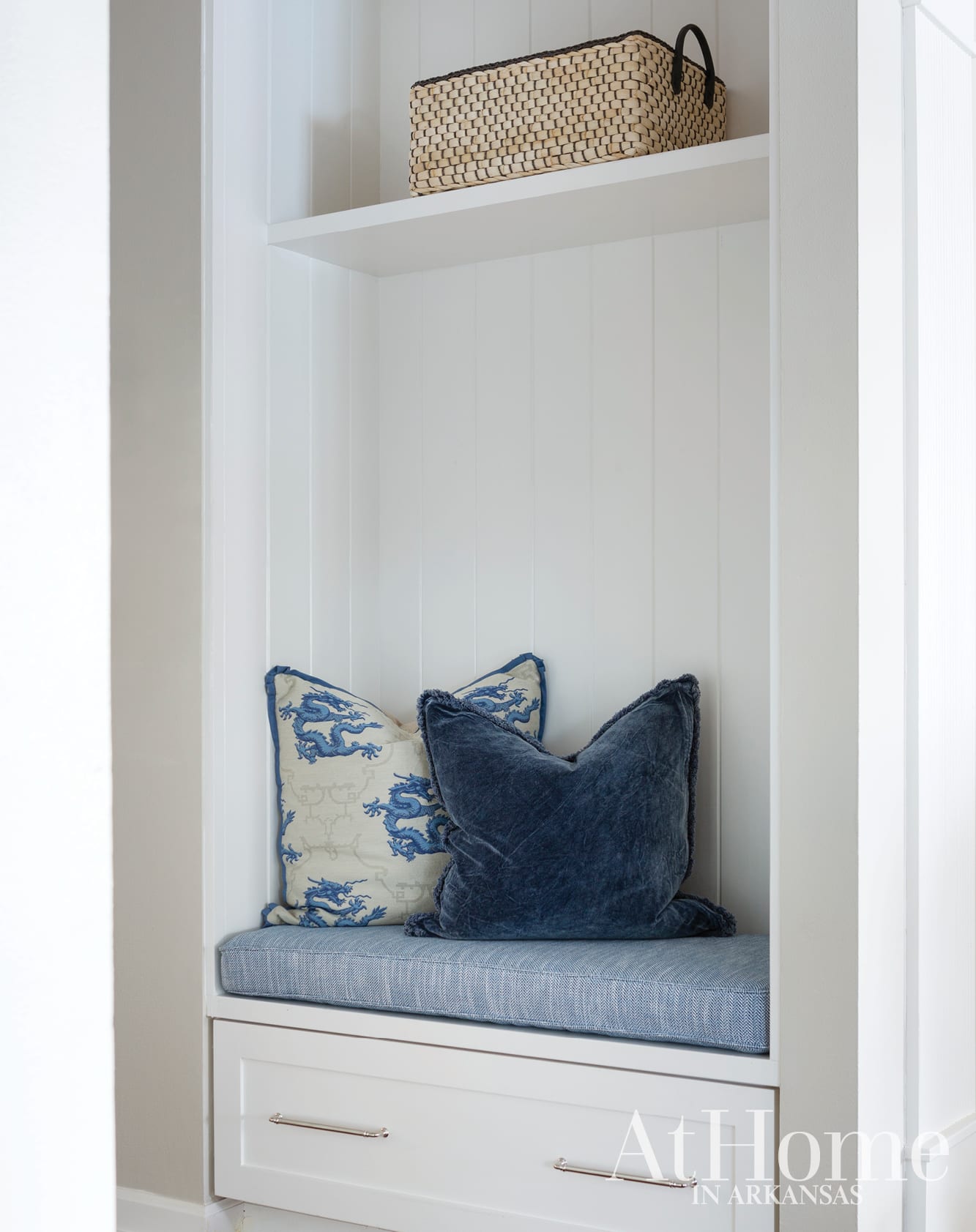 The home’s existing layout had several small “inlets” along the walls. In one of these areas near the entry, Shayla added a drawer, shelf, and bench to make this area function like a mudroom. 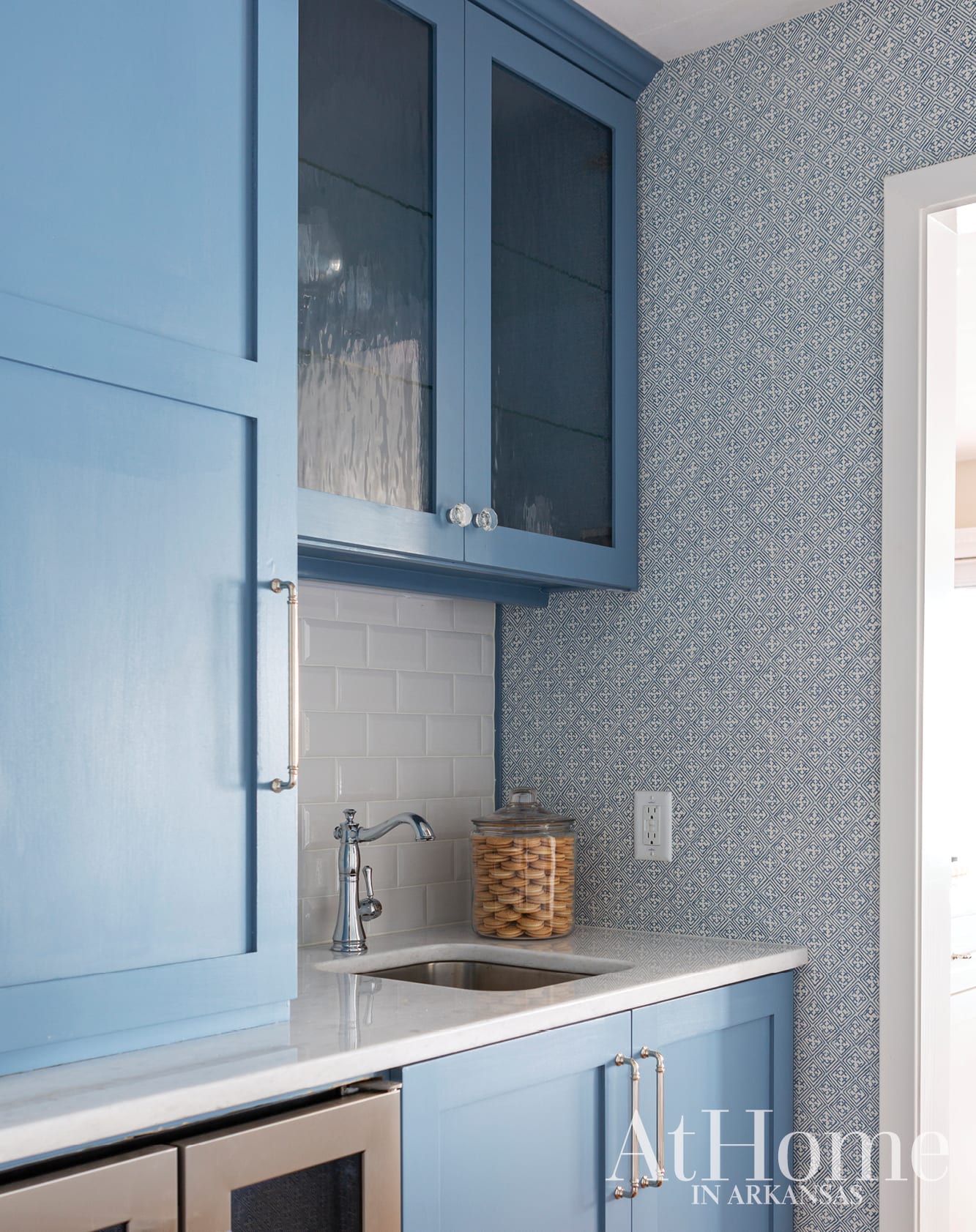 An existing butler’s pantry received all new cabinetry, countertops, backsplash, paint, and modern amenities such as a wine chiller. The wallcovering is Thibaut’s “Laos” pattern. 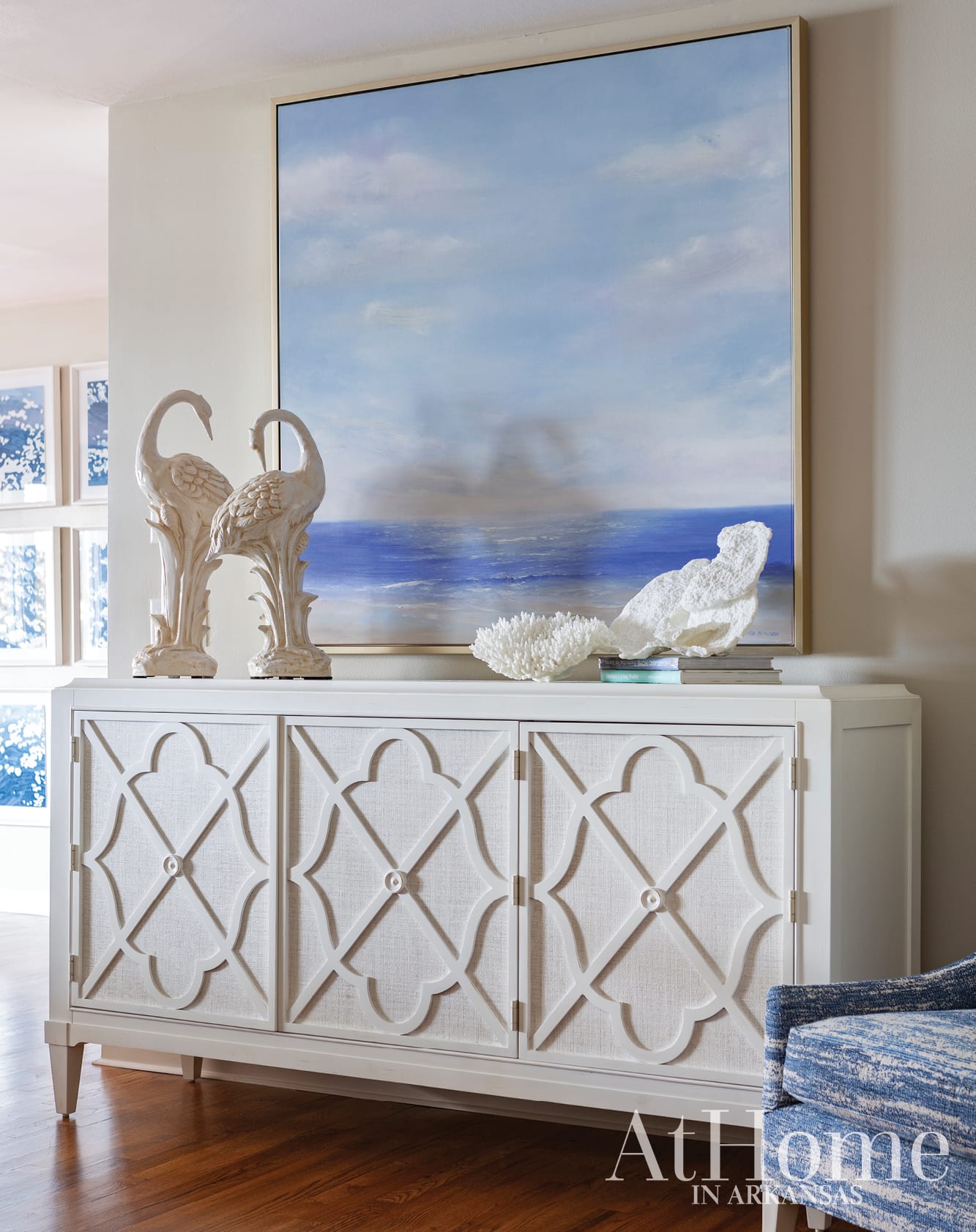 An attractive credenza provides storage for the living room’s audio-visual equipment and board games for the kids. 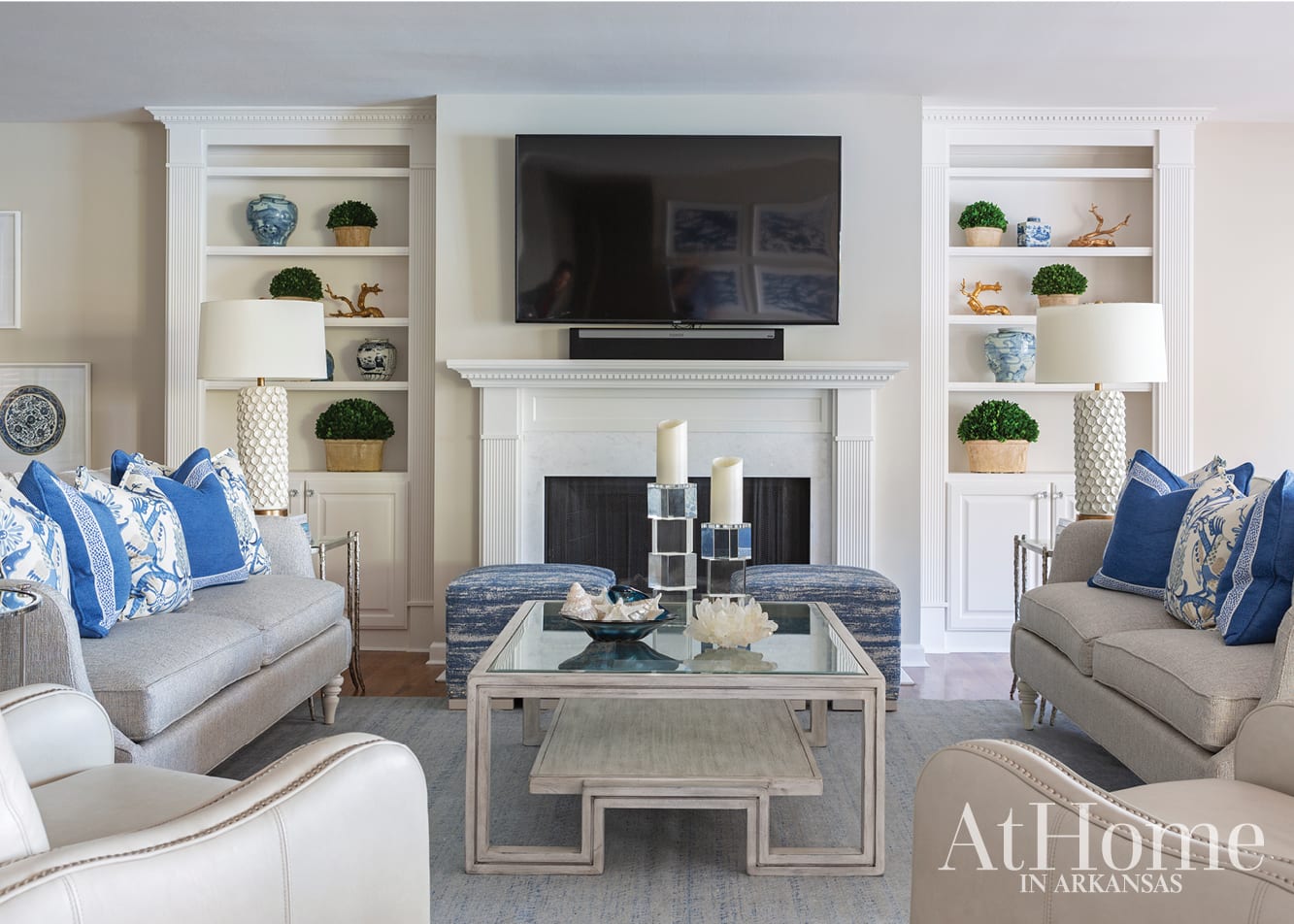 PULL UP A SEAT
Shayla turned the long, narrow living room into cozy quarters by grouping furniture into three distinct sitting areas: “The main area has two sofas and some good-looking recliners; there’s a game table for the kids; and then a seating area with swivel chairs by the windows,” she says. “There are also ottomans that can be pulled into each individual seating area. We wanted as much seating as possible for when they have friends over.” The room, which is now visible from the kitchen and dining room, continues the rest of the home’s palette of taupe, cream, and shades of blue. 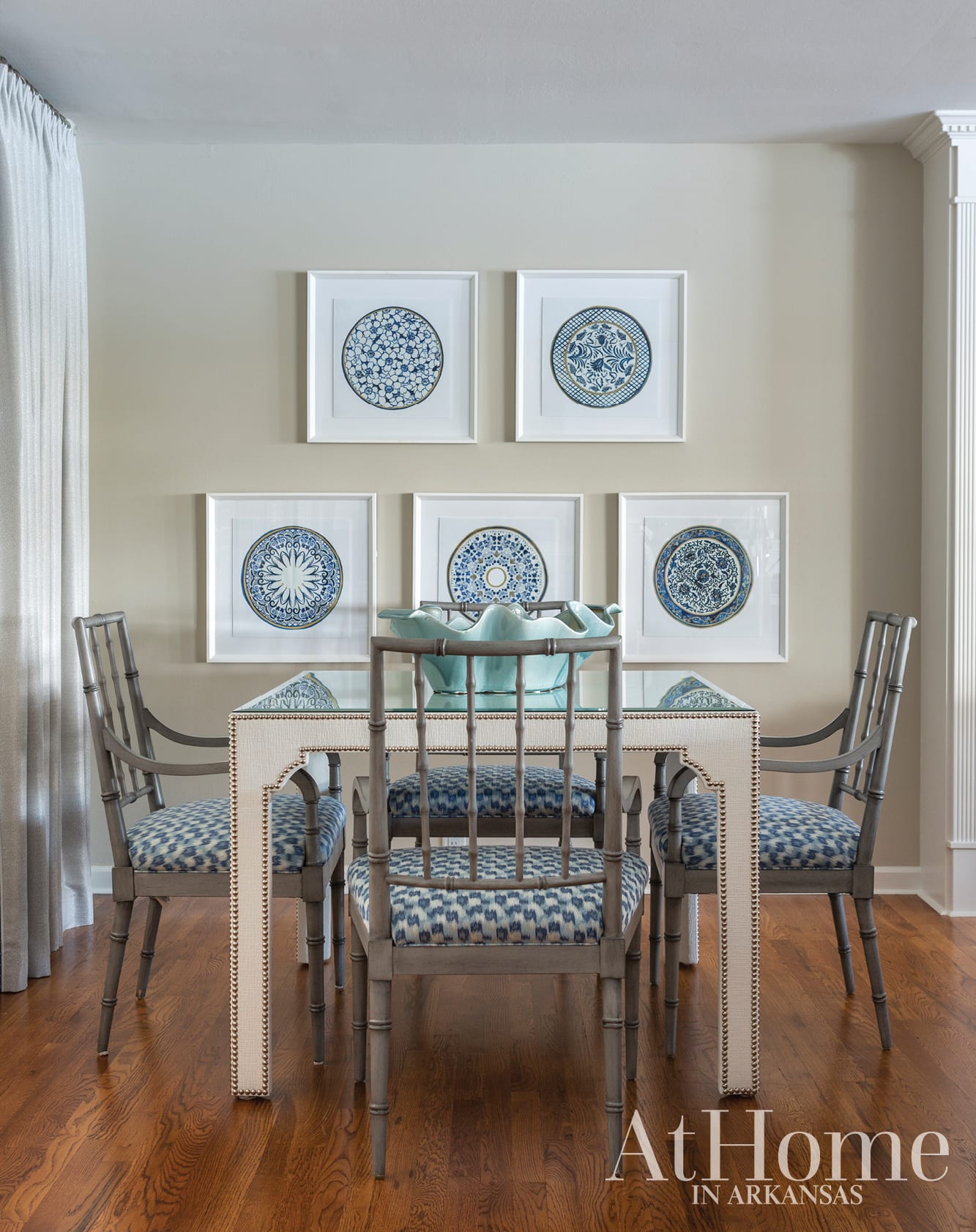 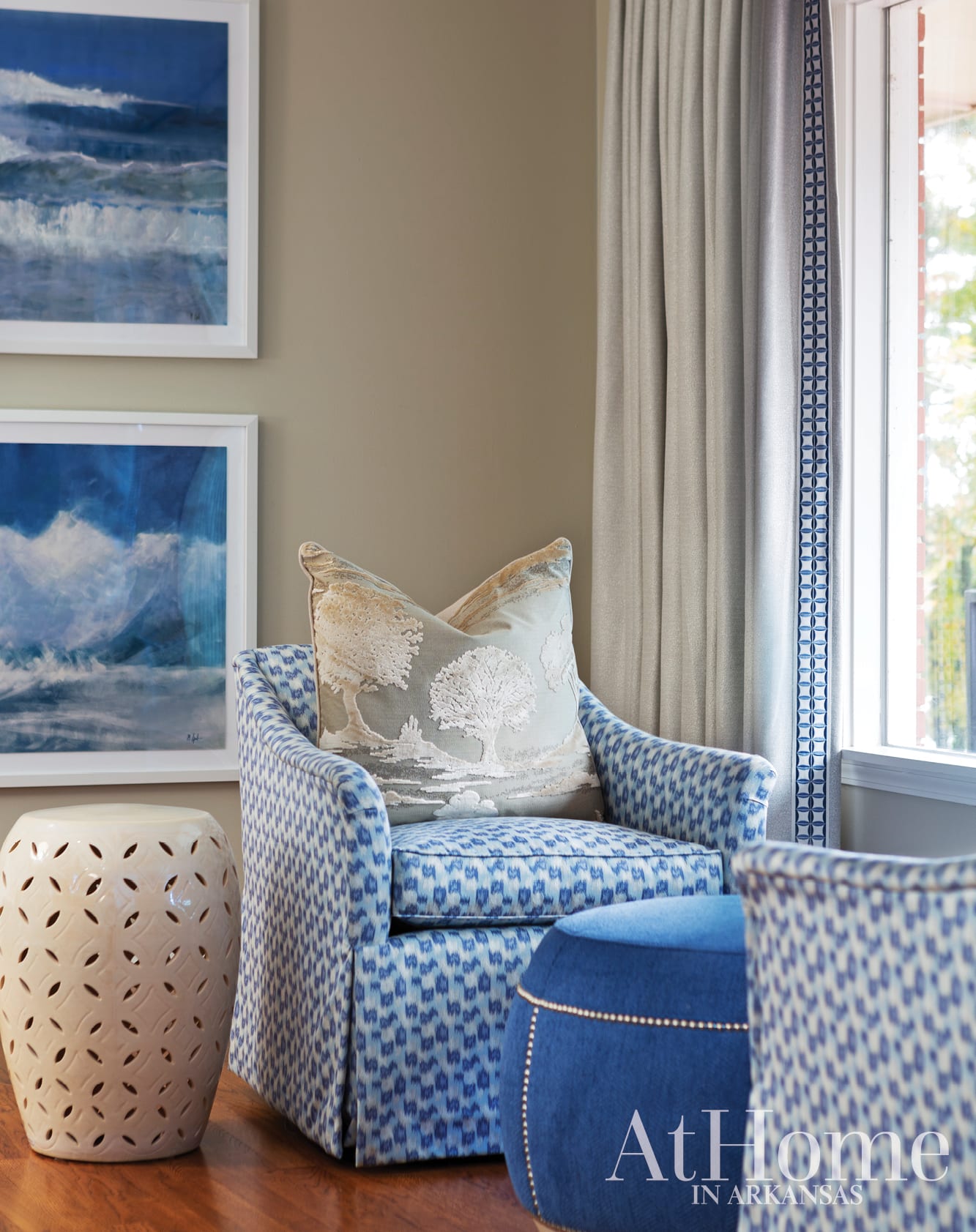 FEELS LIKE HOME
Throughout the home are markers of one of Shayla’s favorite elements of design: texture. “I love to layer texture in a space,” she says. “I feel like it adds warmth, makes a space comfy, and makes it feel more homey and inviting.” 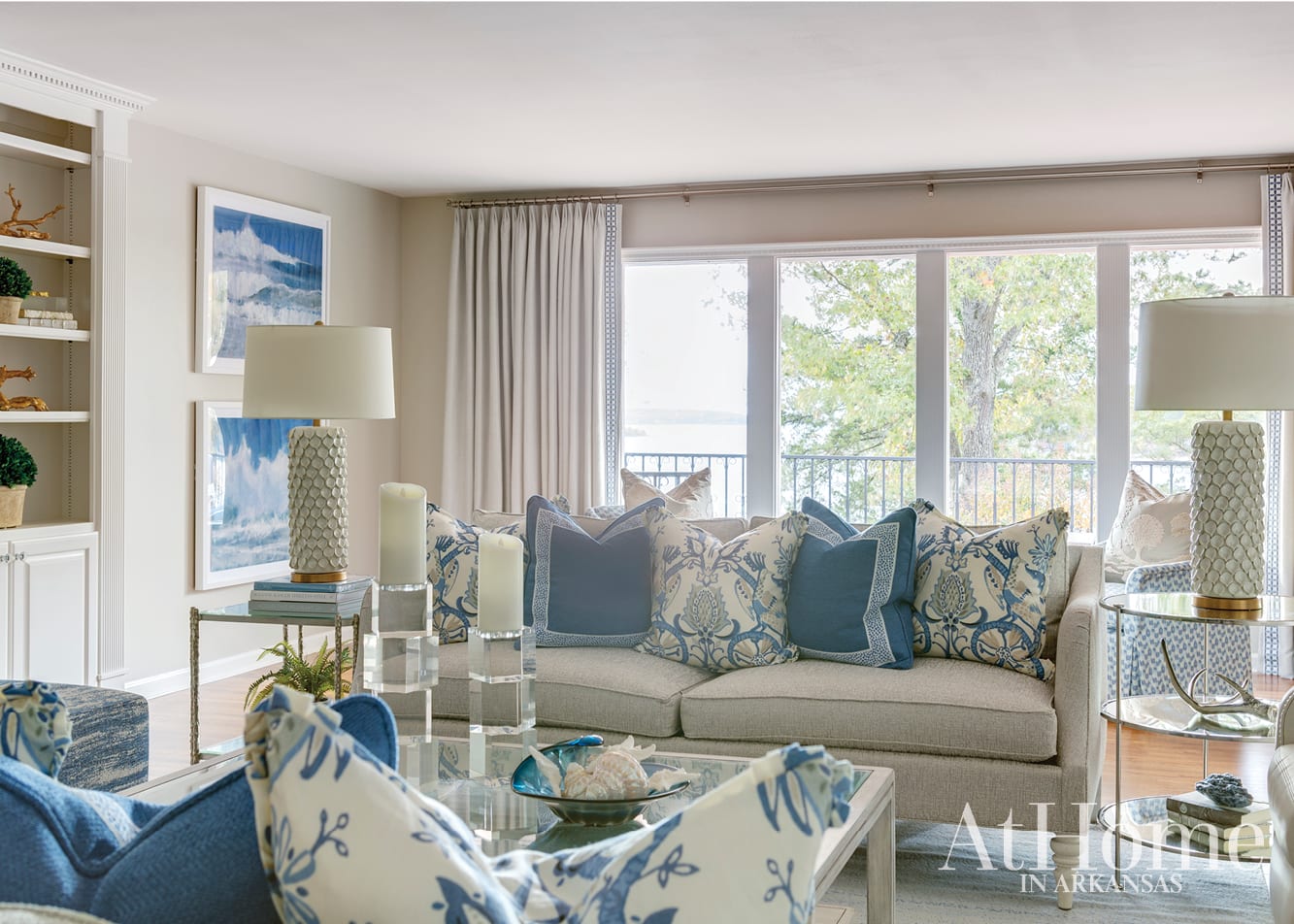 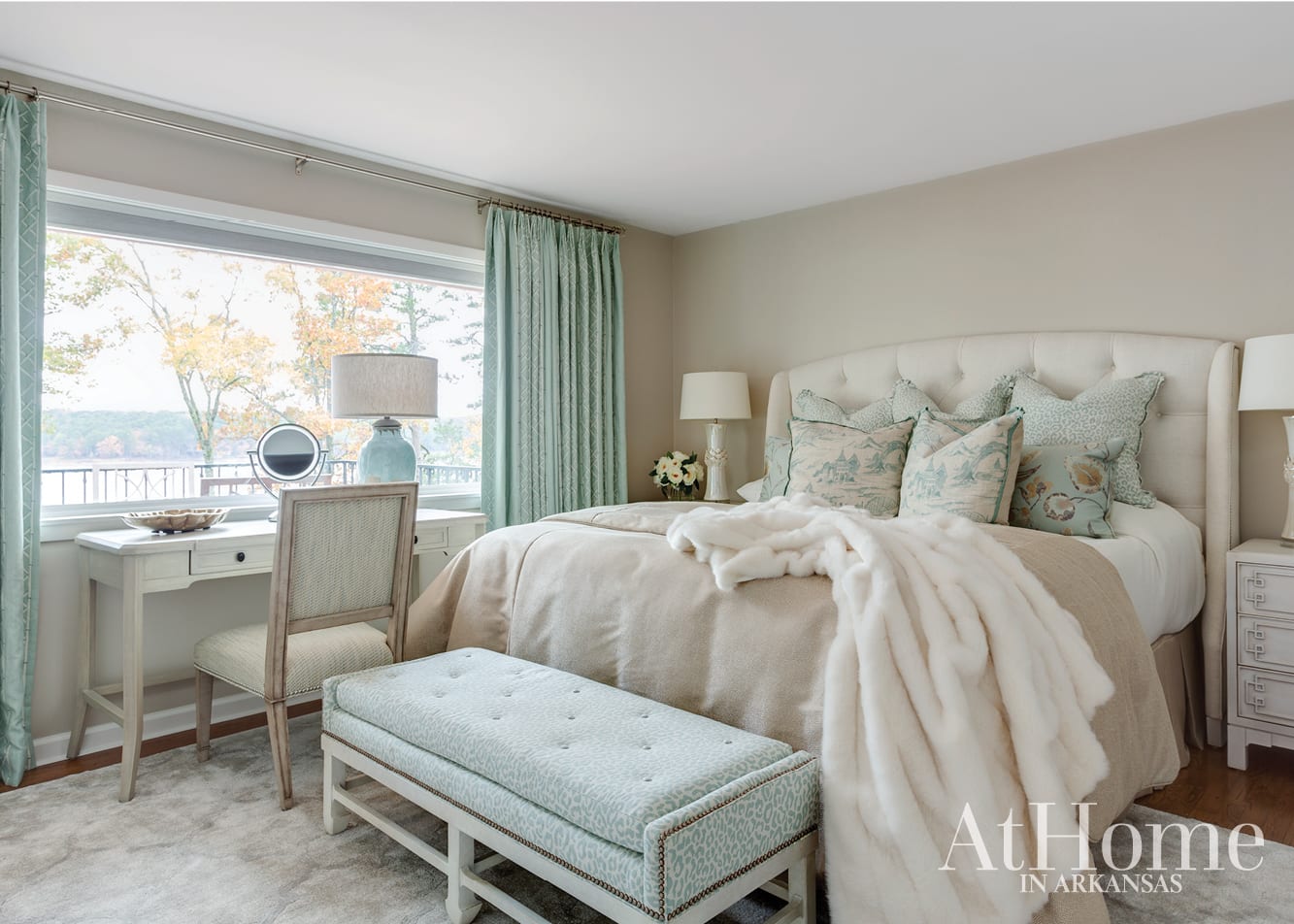 SCENE OF SERENITY
The only other part of the house that saw extensive renovation was the master bedroom. “There was a ton a closet space, which most people would usually love, but this is a vacation home, and a good deal of the room doesn’t need to be taken up by the closet,” Shayla explains. “I took out one side of the closets so the room would be larger, and they each have a chest on their side of the bed.” Due to limited countertop space in the master bath, Shayla put a desk in the bedroom to be used as a vanity area. 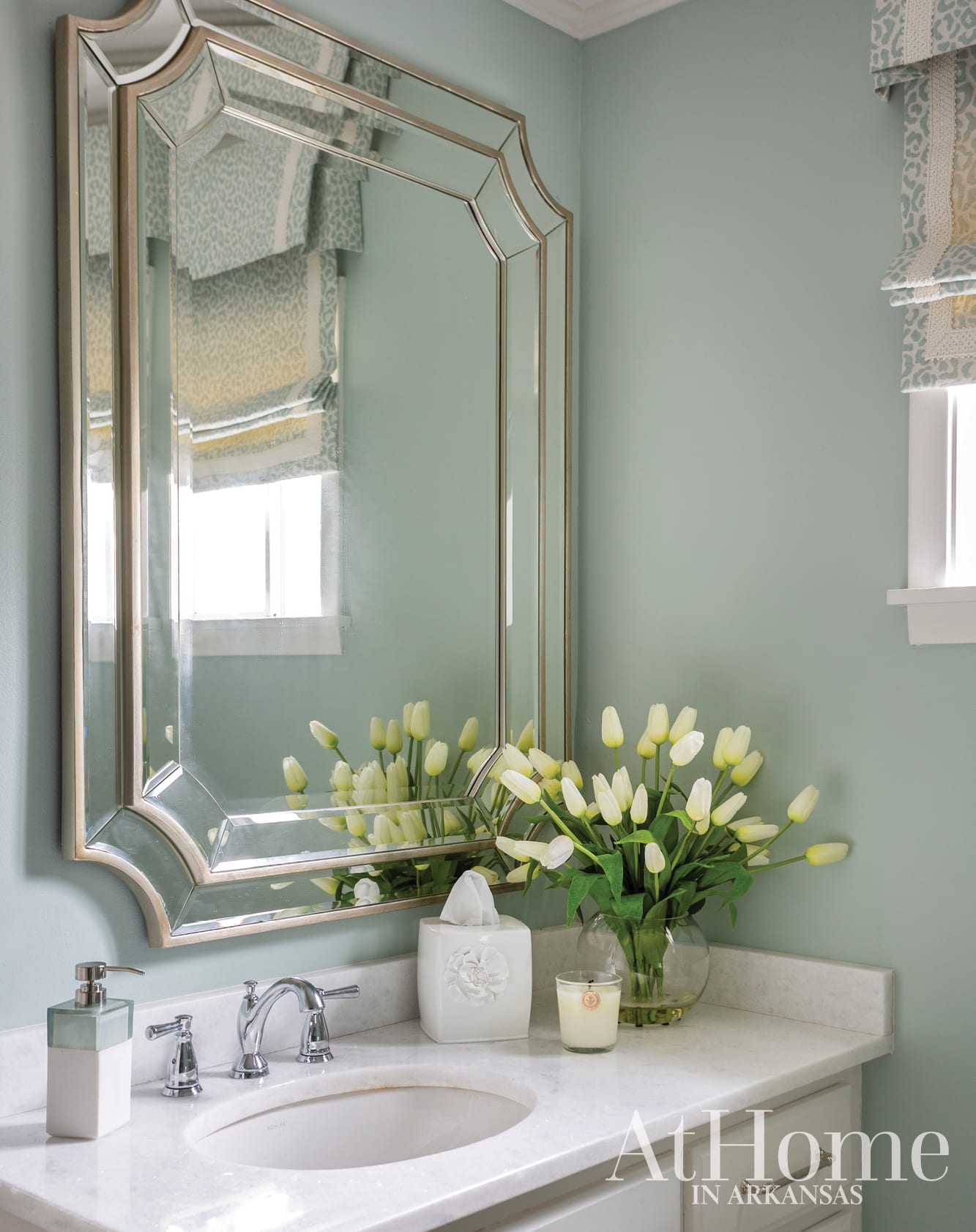 “When I renovate, I like to find a couple of things we can keep in place. That gives them a story and a connection to the history of the home.”
— Shayla Copas, designer 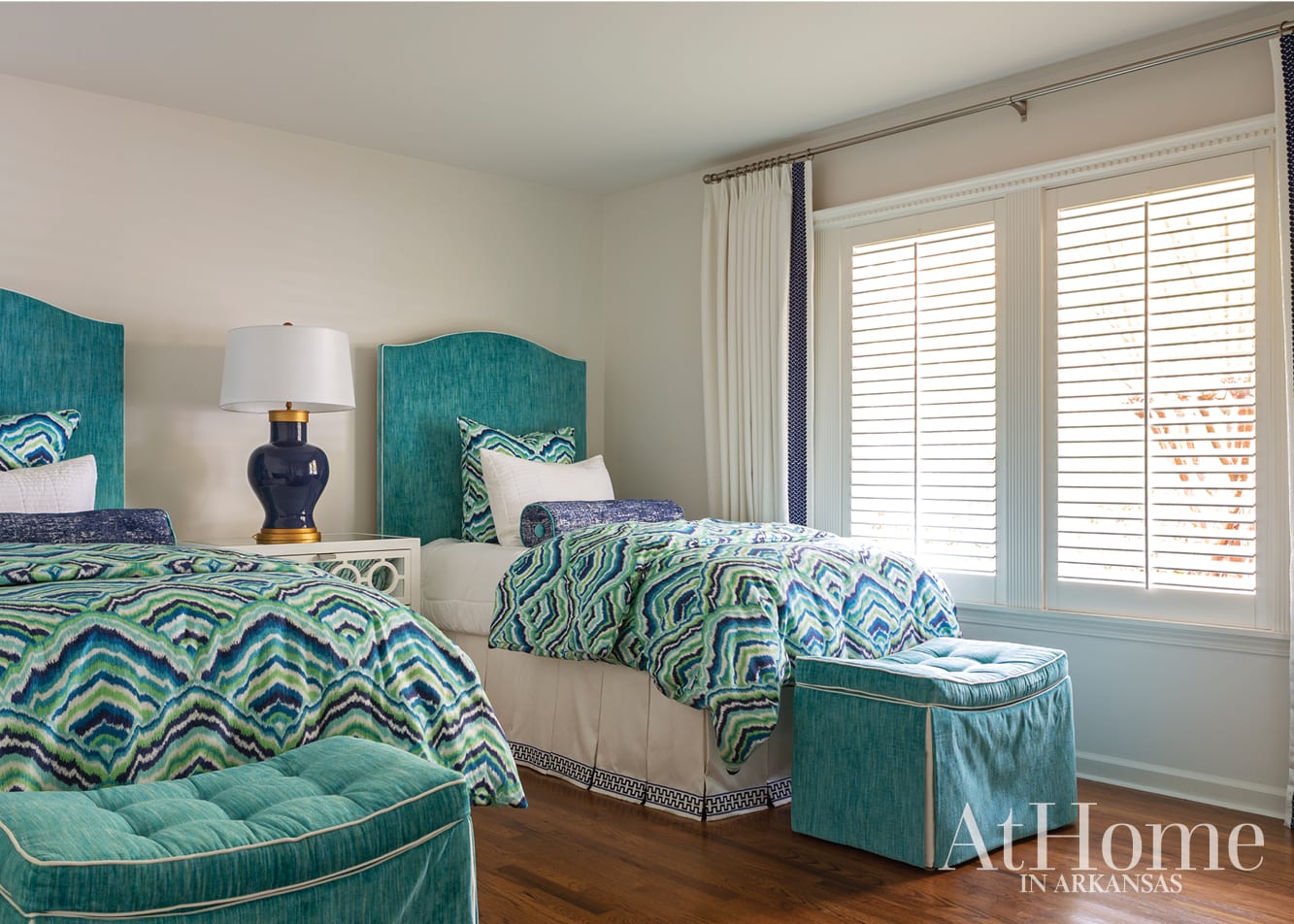 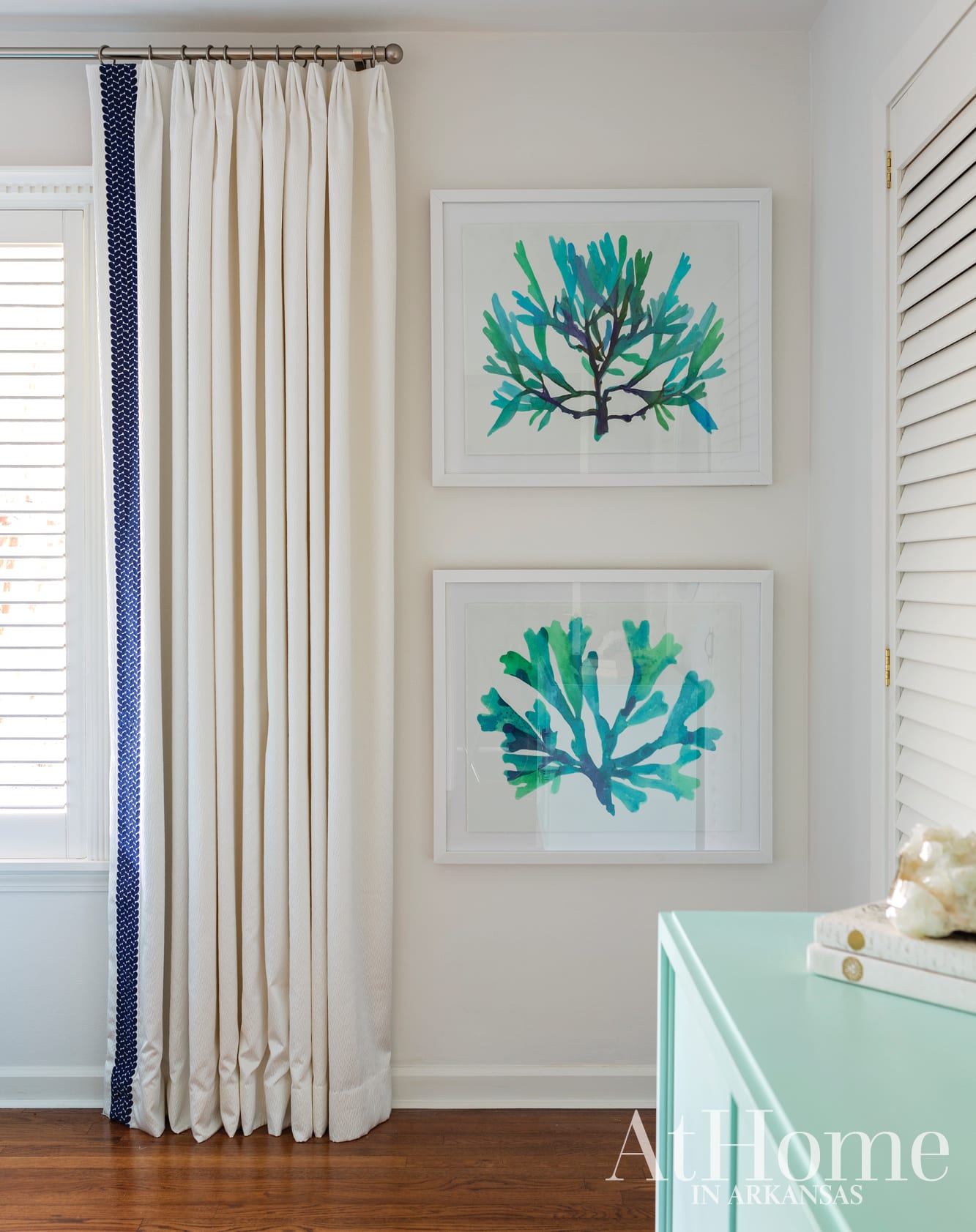 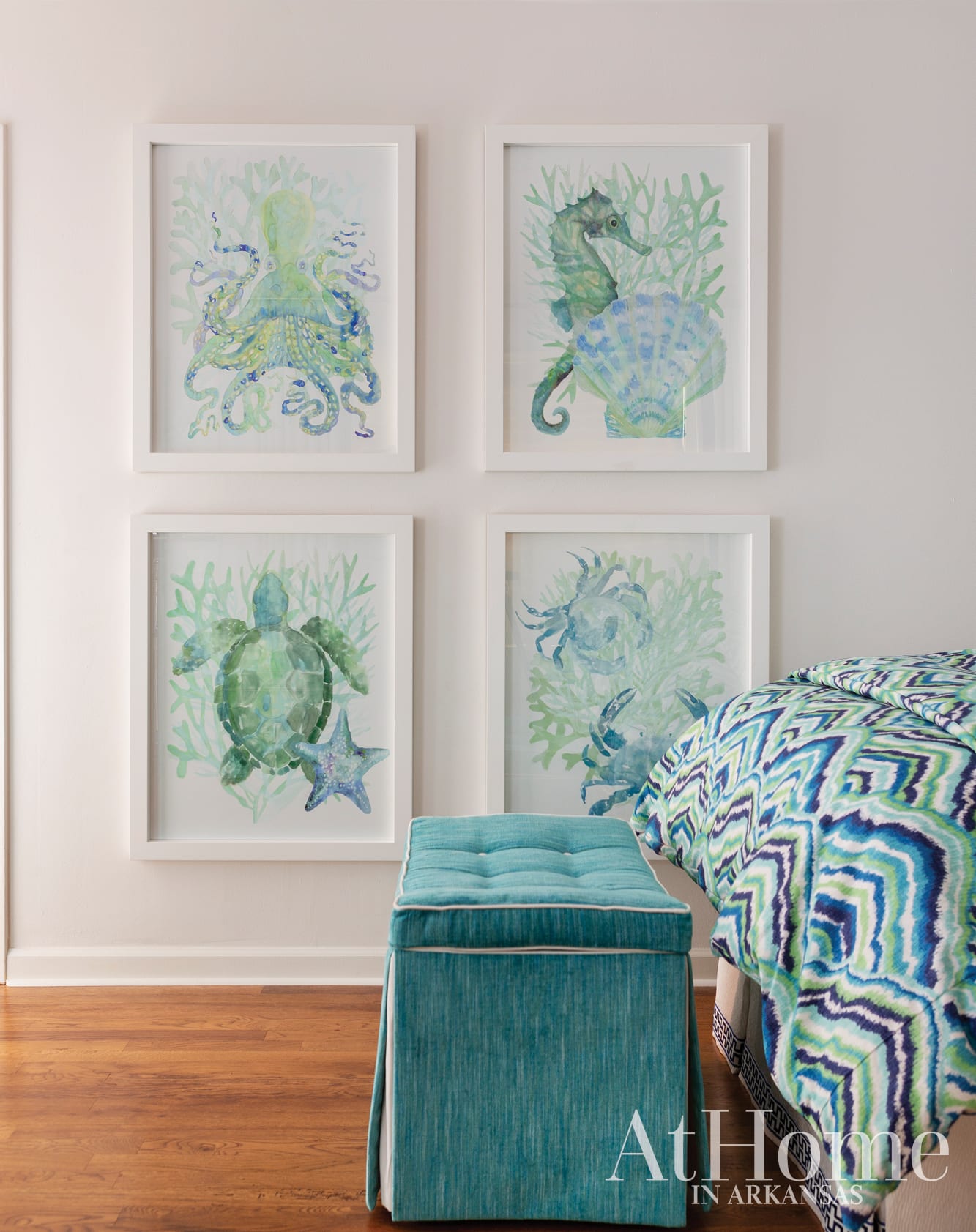 ON A BRIGHT NOTE
Teal custom headboards, ottomans, and bedding paired with navy and seafoam accents in the daughter’s bedroom are a playful take on the blue palette seen in the rest of the home. For artwork, Shayla chose groupings of ocean-inspired paintings that are as at home in this lake house as they might be on a beachfront property. 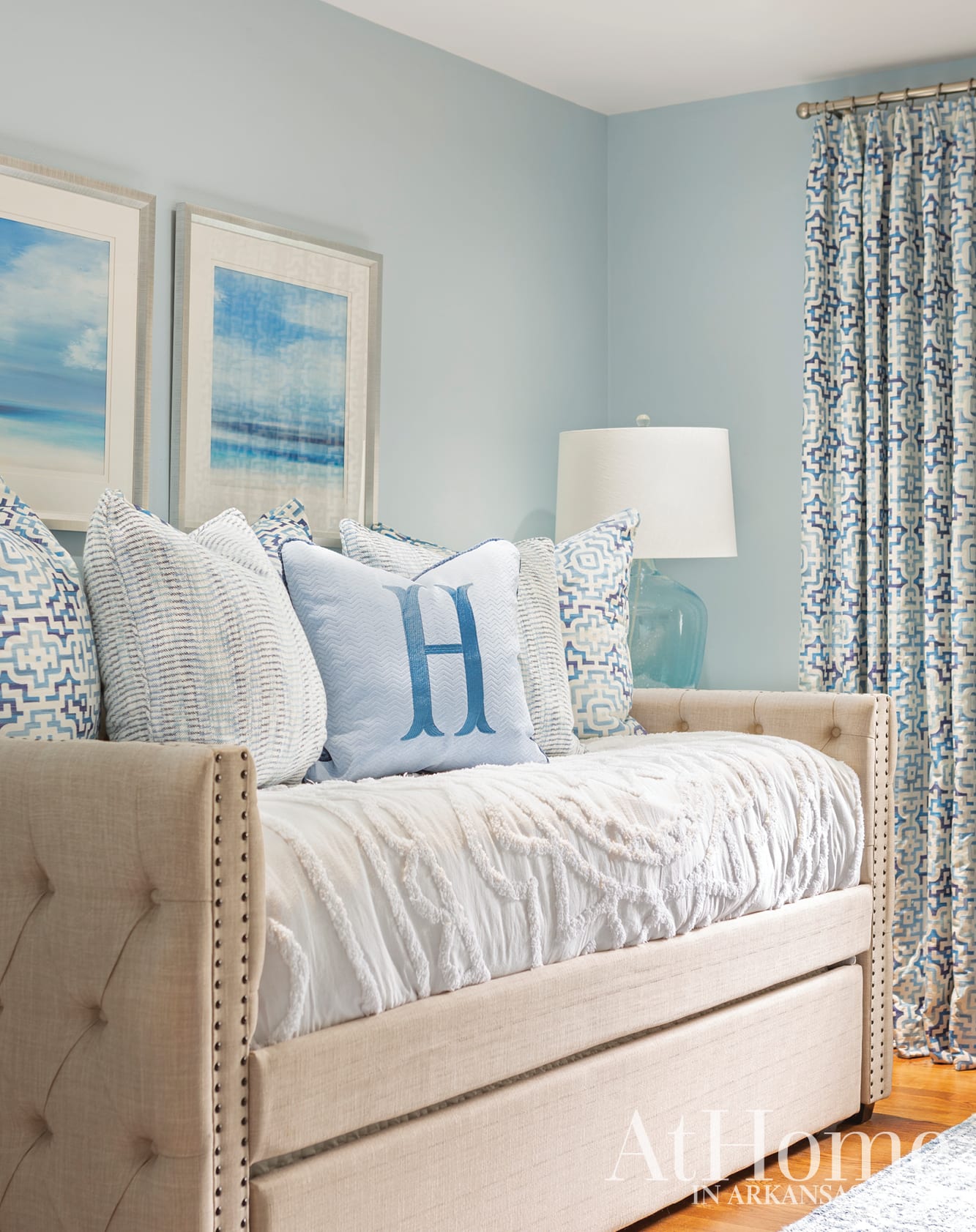 MULTIPURPOSE ROOM
The son’s bedroom, which Shayla converted from an office into a third bedroom, features a daybed and custom bedding with the family’s monogram embroidered. The convertible sleeping area means this room can do double duty as a hangout for kids during the day.