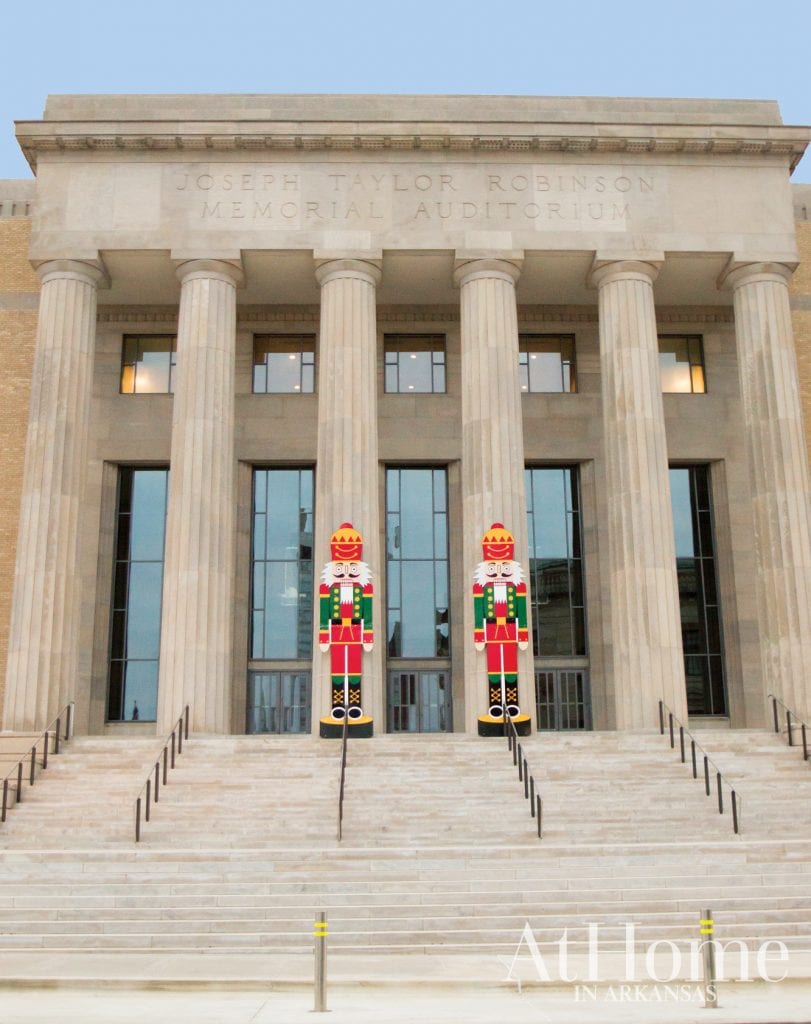 Larger-than-life nutcrackers greet patrons on the steps of the Robinson Center.

Nov. 23 to Dec. 31
No one quite puts you in the holiday spirit like Buddy, the character popularized by Will Ferrell in the 2003 movie Elf. When Buddy discovers he’s a human, not an elf, he leaves the North Pole in search of his father in New York City—only to discover that his very grumpy human dad is on the naughty list. That script was adapted into a musical and first debuted on Broadway in 2010, and now you can experience Buddy’s loveable spirit with the cast at Murry’s Dinner Playhouse. Showtimes are Tuesday through Sunday with matinees on select Sundays and Wednesdays. Tickets are $33–$37 ($23 for children) and include dinner. murrysdp.com

Dec. 7–9
This year marks the 40th anniversary of Nutcracker Spectacular performed by Ballet Arkansas. The holiday favorite features accompaniment by the Arkansas Symphony Orchestra, a choir, and more than 200 cast members from the Little Rock community. The second annual Land of the Sweets Nutcracker Tea before the Dec. 9 matinee offers little ones the chance to meet characters and have their photo taken with the Sugar Plum Fairy. (And if you happen to miss this production of the holiday favorite, don’t fret—Moscow Ballet’s The Great Russian Nutcracker will take the stage Dec. 27 at Robinson Center.) Showtimes are Dec. 7 at 7 p.m., Dec. 8 at 2 p.m. and 7 p.m., and Dec. 9 at 2 p.m. Tickets are $20–$99. balletarkansas.org

Home for the Holidays at Robinson Center

Dec. 14–16
The Arkansas Symphony Orchestra presents all of your wintery favorites in this holiday-themed program, including “White Christmas,” “O Holy Night,” and “We Need a Little Christmas.” According to the symphony’s website, holiday sweaters are encouraged! In addition to ASO’s classical instrumentation, vocalists Vernon di Carlo and Maria Fasciano will appear as soloists for several numbers. Showtimes are Dec. 14 at 7:30 p.m., Dec. 15 at 7:30 p.m., and Dec. 16 at 3 p.m. Tickets are $16–$68. arkansassymphony.org 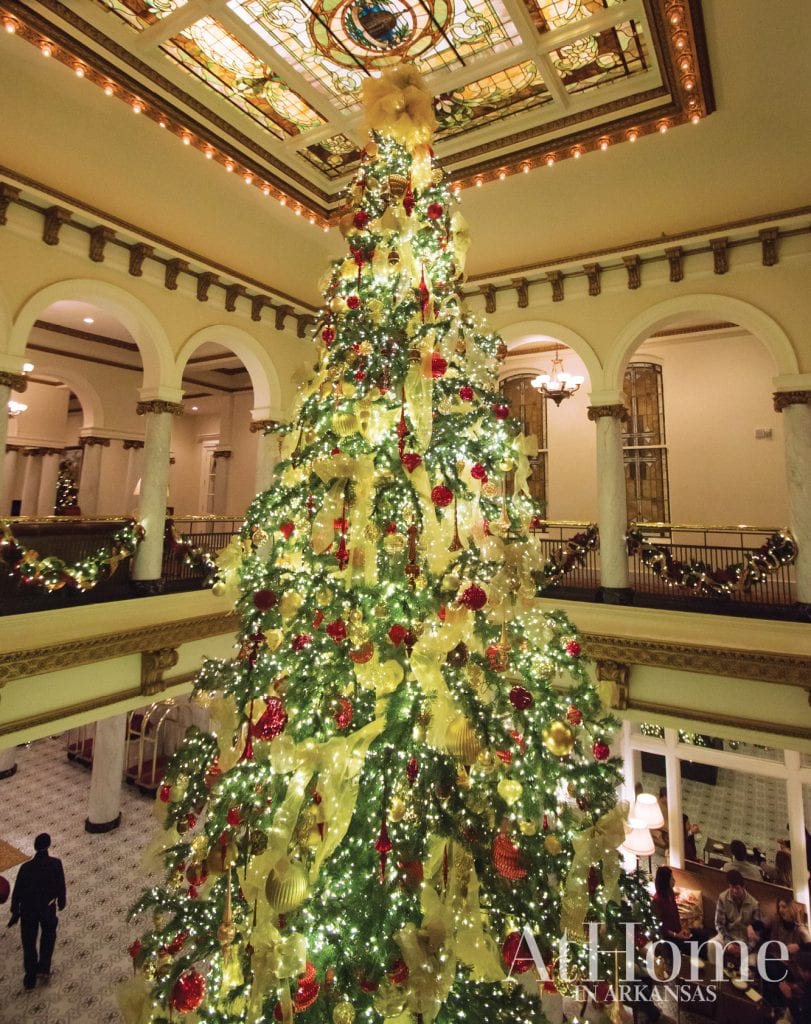 Stop by The Capital Hotel to check out their 28-foot tree and sip a seasonal cocktail at The Capital Bar & Grill.

Dec. 2, 2–5 p.m. // Mosaic Templars Cultural Center
The annual pie-baking contest has become one of the most anticipated holiday traditions in the Capital City. Founded in 2012, this contest honors Robert “Say” McIntosh, a political and civil rights activist also known as the “Sweet Potato Pie King of Little Rock” for his signature pie served at the now-closed Say McIntosh Restaurant and Pie Factory on Seventh Street. The contest is a part of the Mosaic Templars Cultural Center’s Holiday Open House, which features live music, dance groups, and holiday crafts for the public. Attendees are also welcome to taste-test the pies and vote for a “People’s Choice” winner of the competition. While the contest is free to enter, participants are asked to bring a toy donation for the Say McIntosh Toy Drive. mosaictemplarscenter.com

Christmas in the Quarter High Tea

Dec. 9, 3 p.m. // The Empress of Little Rock
Originally deemed the Hornibrook Mansion when it was built in 1888, The Empress now serves as a bed and breakfast in Little Rock’s Quapaw Quarter. The innkeepers will host a holiday high tea complete with Irish scones and clotted cream, brie-and-fig sandwiches, and specialty desserts paired with a seasonal tea. Included with the price of admission is a tour of the historic Victorian mansion. Tickets are $50 per person and reservations are required due to limited seating. theempress.com

Dec. 14, 5–8 p.m. // Historic Arkansas Museum
Fans of eggnog should make plans to attend Historic Arkansas Museum’s 14th Ever Nog-off, an opportunity to taste a variety of eggnog recipes—some traditional, some a little more revolutionary (past winning recipes have included ice cream, chai tea, and apple-flavored bourbon). After you taste and cast your vote, explore the museum’s second-floor gallery, where Face to Face: Contemporary Portraits is on display through Feb. 3—or, since the Nog-off is coordinated to fall on 2nd Friday Art Night, spend the rest of the evening strolling through shops and galleries that will stay open past their usual closing times. The event is free and open to the public. historicarkansas.org 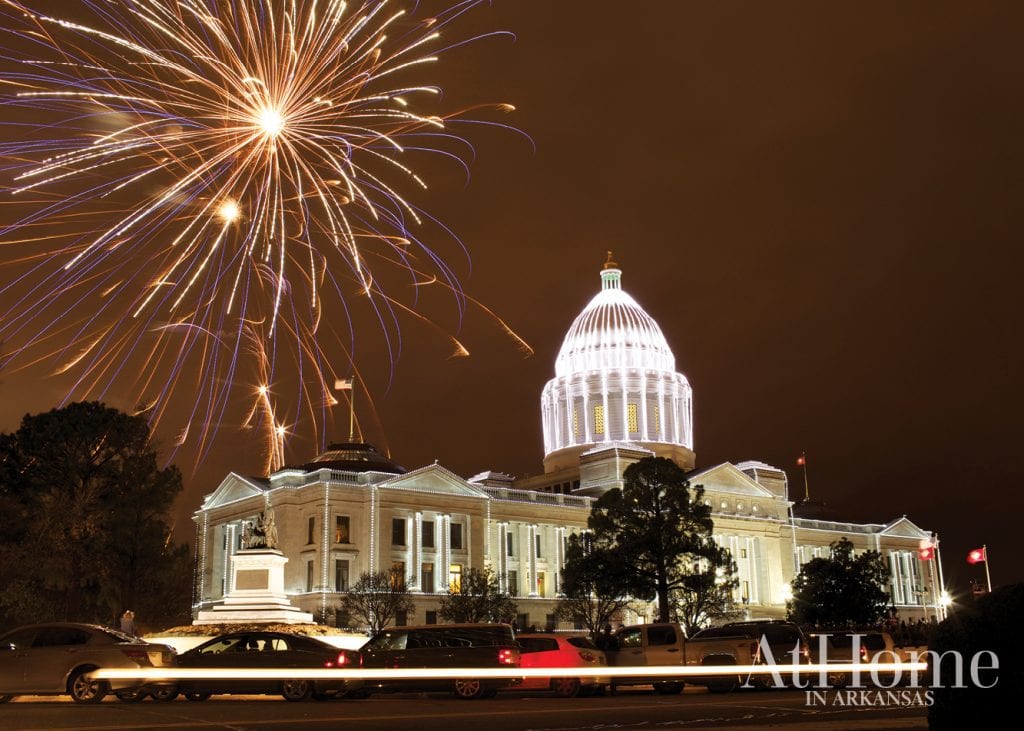 The lights adorning the Capitol will be lit on Dec. 1.

Nov. 30 to Dec. 16, Fridays–Sundays only // Arkansas Arts Center
While Jack Frost is typically known for bringing wintery weather and nipping at your nose, in this production by the Arts Center’s Children’s Theatre, he’s causing major mischief in the North Pole. Several special events offer even more opportunities to get in the spirit with little ones: After opening night on Nov. 30, you can join the cast for snacks and punch; Dec. 7 is Pajama Night, and the box office will have stickers for children who wear their pajamas to the play. Showtimes are Fridays at 7 p.m. and Saturdays and Sundays at 2 p.m. Tickets are $10–$12.50, and children under 2 are free. arkansasartscenter.org

Dec. 1, 3–5 p.m. // Downtown Little Rock
One of the capital city’s biggest holiday traditions has become the Big Jingle Jubilee Holiday Parade, held on the first Saturday of December. The parade starts at the intersections of Second Street and Broadway, and you can watch the procession along Broadway from Second to Fourth streets and on Capitol Avenue from Broadway to the Capitol building. Participants include floats, marching bands, antique vehicles, local celebrities, and, of course, the big man himself: Santa, who will be joined by Mrs. Claus and two of his reindeer as grand marshals. After the parade ends at the steps of the Capitol, be sure to stick around for the lighting of the building’s Christmas display. The festivities continue the following day with Reindeer on the River, a hands-on meet-and-greet in the River Market from noon to 5 p.m. All events are free and open to the public. holidaysinlittlerock.com

Dec. 2, 1–4 p.m. // Historic Arkansas Museum
For half a century, the Historic Arkansas Museum has offered a Christmas celebration based on how the holiday would have been celebrated in the 1800s—complete with historical reenactments, carols, hot cider, and ginger cake. Much of the action takes place around the Hinderliter Grog Shop; built in 1827, it’s now oldest surviving structure in the state. The event is also an opportunity for children to learn about life in days gone by through pioneer demonstrations such as blacksmithing. The event is free and open to the public. historicarkansas.org

There’s more fun to be had in North Little Rock

Trail of Lights, Sherwood
One of the state’s best drive-through light displays, the Sherwood Enchanted Forest Trail of Lights opens Nov. 26 and runs through Dec. 30 at the Sherwood Sports Complex. Admission is free, but donations of nonperishable food items will be appreciated. cityofsherwood.net