In Little Rock, a team of professionals thoughtfully updates a home designed by architect Fay Jones 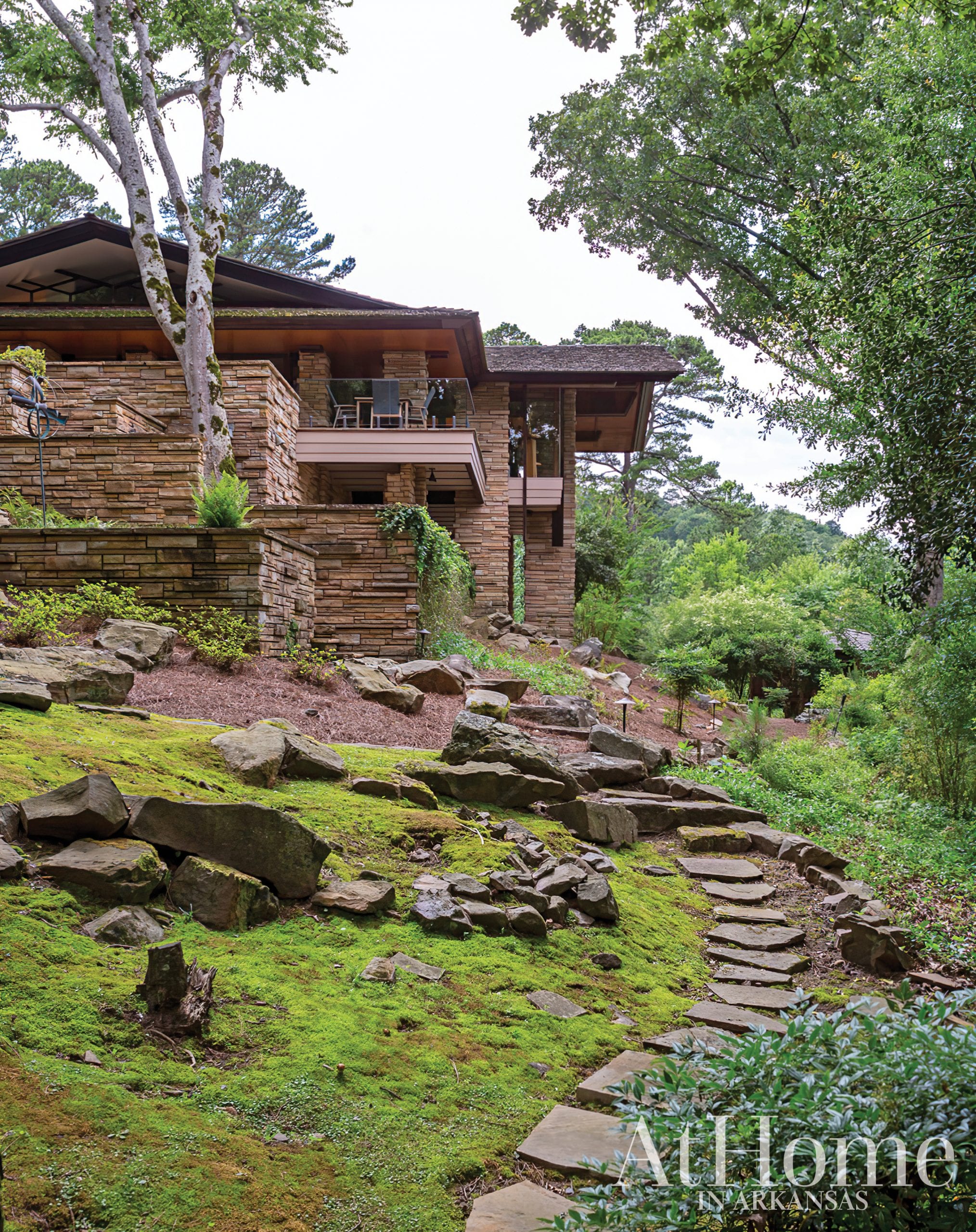 Maintaining integrity was top priority when interior designer Brittany Nixon Brun and architectural designer Rodney Parham began to update a home by famed Arkansas architect Fay Jones. Built in 1964, Pine Knoll, as the property is known, was in good condition when the new owners purchased it; however, after almost 60 years, it was time to modernize its amenities.

“I was kind of nervous about working on an icon’s project,” Rodney says of Jones, who is the namesake of the University of Arkansas School of Architecture and Design. “I told everyone in my office that I was going to touch it with a feather,” he adds of his careful approach. The homeowners echoed this desire for mindfulness as they spent days researching decisions, sourcing products, and going about the process hand-in-hand with both Rodney and Brittany. “In working on the house, whenever we came to a challenge, we’d always ask ourselves, What would Fay do?” one of the owners says. The saying became a type of mantra for the design team in solving for both planned updates as well as the unforeseen. “This is a case of the right person buying the right house,” Brittany adds. “They wanted everything to feel cohesive and look like it has always been in place.”

To that respect, most of the changes were made in undetectable ways. The most noticeable difference came in the foyer, where a sunken atrium with a fountain was removed to create a seamless entry leading from the front door to the great room. “We have grandchildren and allergies, so we needed to rework that area; everything else in the house was just modernized,” the owner says. Aside from aesthetic changes that include new furnishings, Brittany notes there were a number of “behind-the-scenes” updates that needed to take place in order to make the home function at peak. For example, while wooden light boxes seen throughout the home remain, they were updated with LED fixtures, and light switches were changed to more contemporary versions.

Today, the result is a property true to the original vision. “I have taken people who are familiar with Jones’s work through the home and asked if they could tell what we changed,” Rodney says. “They could not, and that was a huge compliment.” 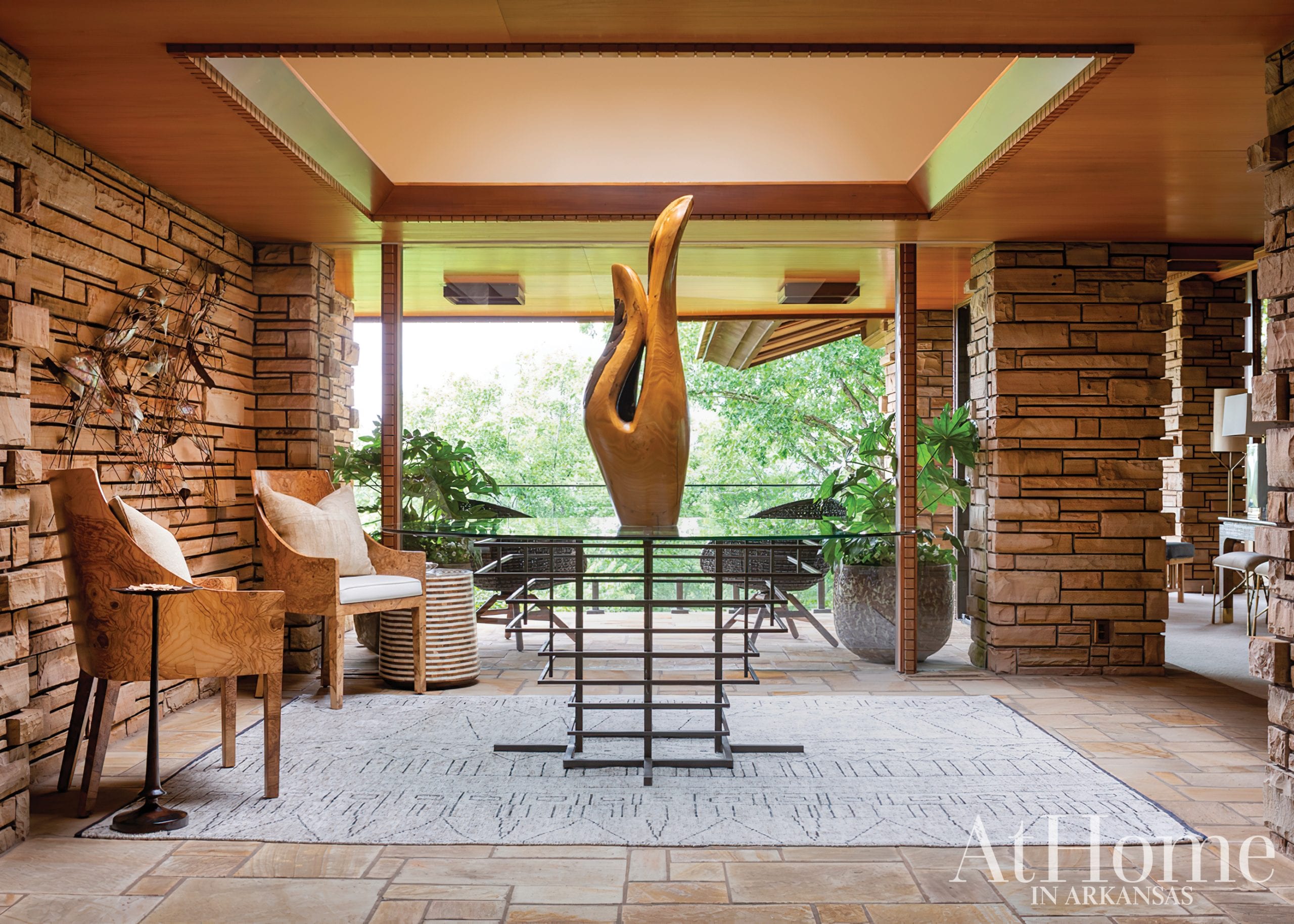 Original stone was sourced to fill a sunken atrium in the entry. Rodney designed the custom iron table, which was made by Sedder Iron Works and holds Arkansan John Sewell’s “Two Leaves” sculpture.

Pieces with a Past
While the design team strived to keep as much of the home intact as possible, they also made an effort to reuse any dismantled pieces. The original headboard from the master bedroom was converted to a console with the help of local furniture maker Tommy Farrell. Atop its base sits a Fay Jones book as well as issues of magazines (including At Home in Arkansas’s September 2000 issue and House Beautiful) where the home was featured. A copy of the home’s original blueprint was obtained from the University of Arkansas’s archives and now hangs over the piece. 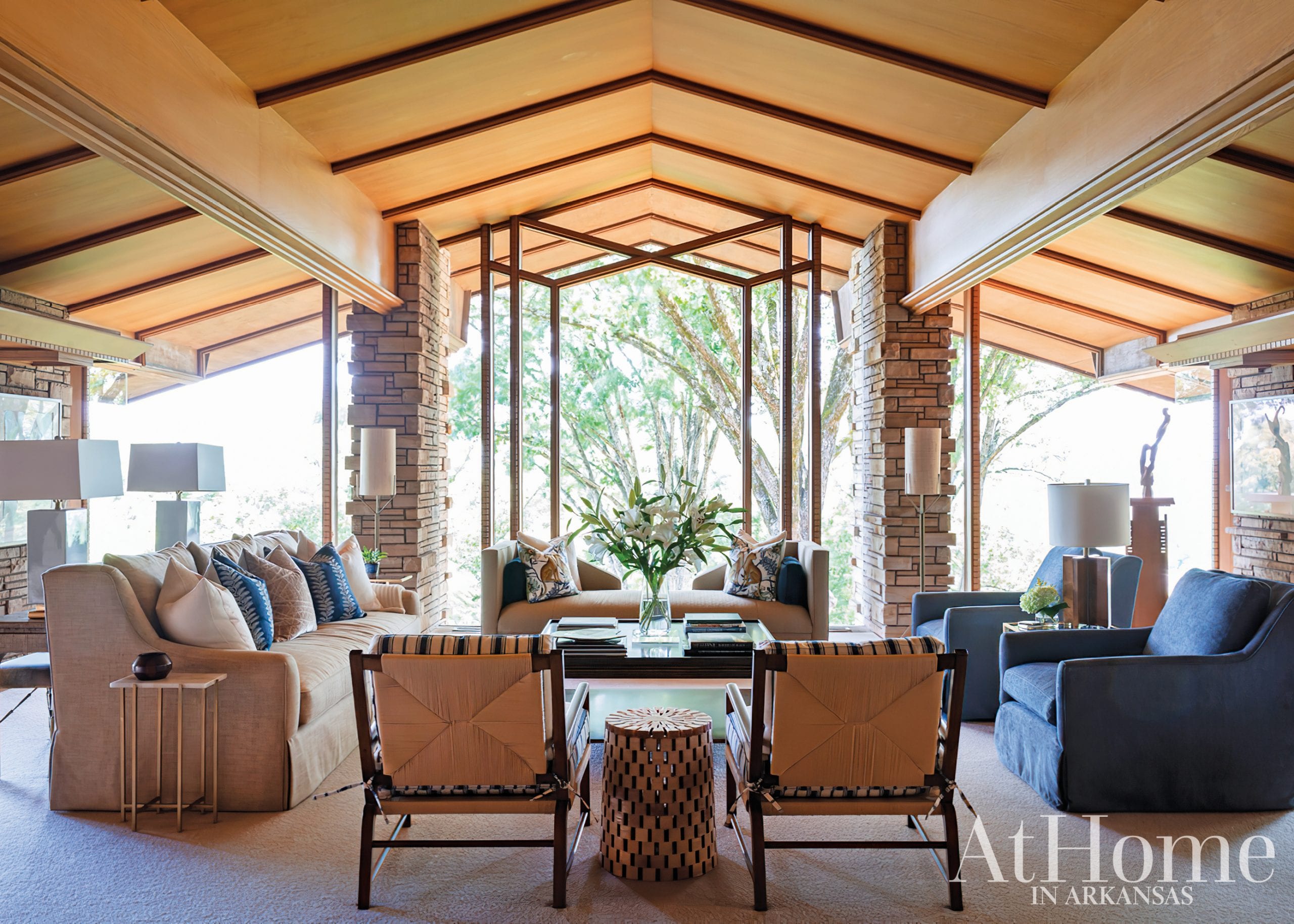 “In working on the house, whenever we came to a challenge, we’d always ask ourselves, What would Fay do?” 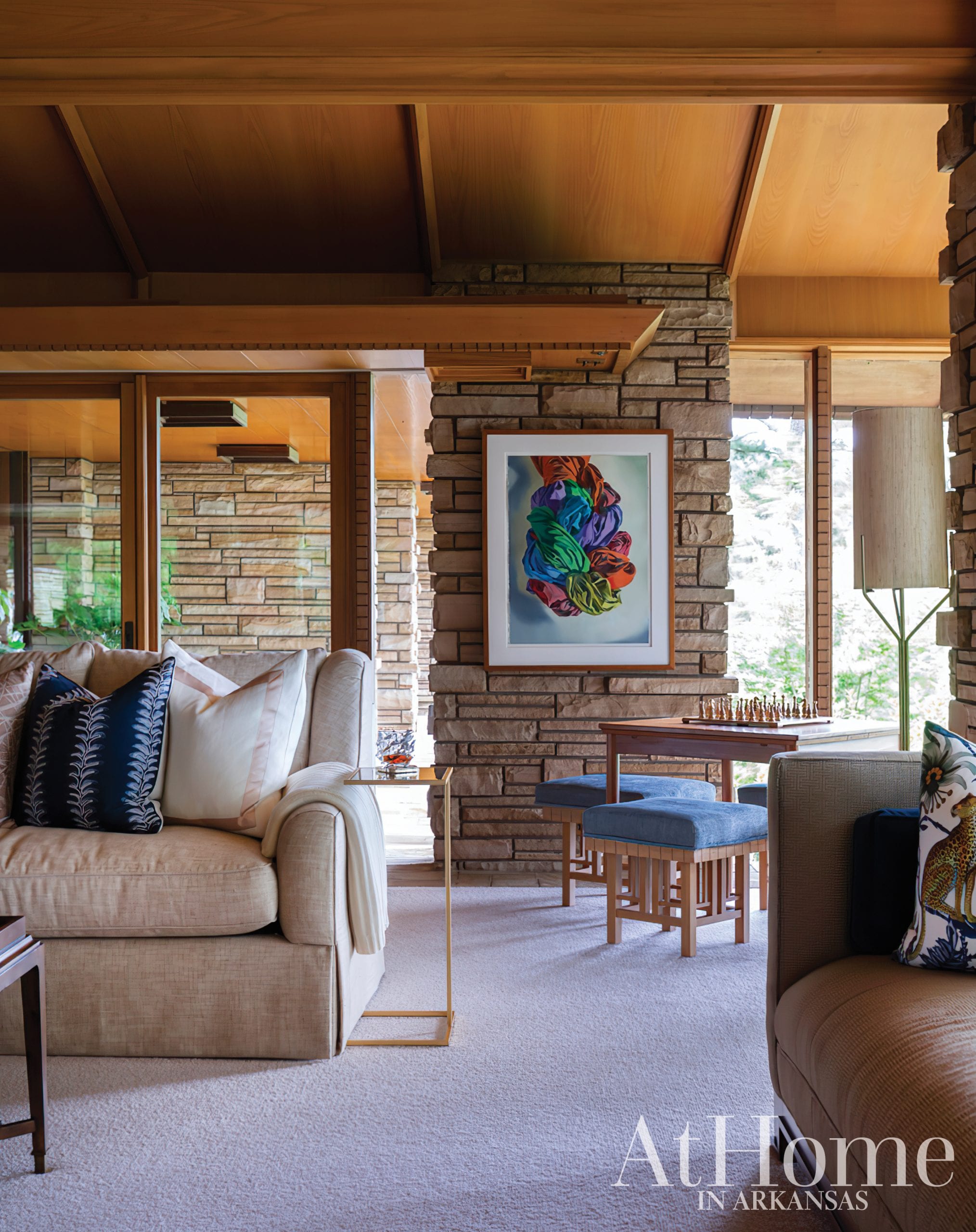 On the Lookout
The great room is divided into different zones, including a central space with plenty of seating for extended family and friends, a game table nook, and a fireplace sitting area. Jones was known for building furniture for many of his homes and this house was no exception. Small occasional tables are scattered throughout; Brittany used some in a grouping by the fireplace while the tops of others were upholstered to create seating around a game table. The designer also pulled a number of pieces from the owners’ previous residence while adding in blue fabrics and accessories to complement the green hues outdoors. “There is a center spot of the sofa where I can sit and look out, and it feels like I’m in the treetops,” the owner says. 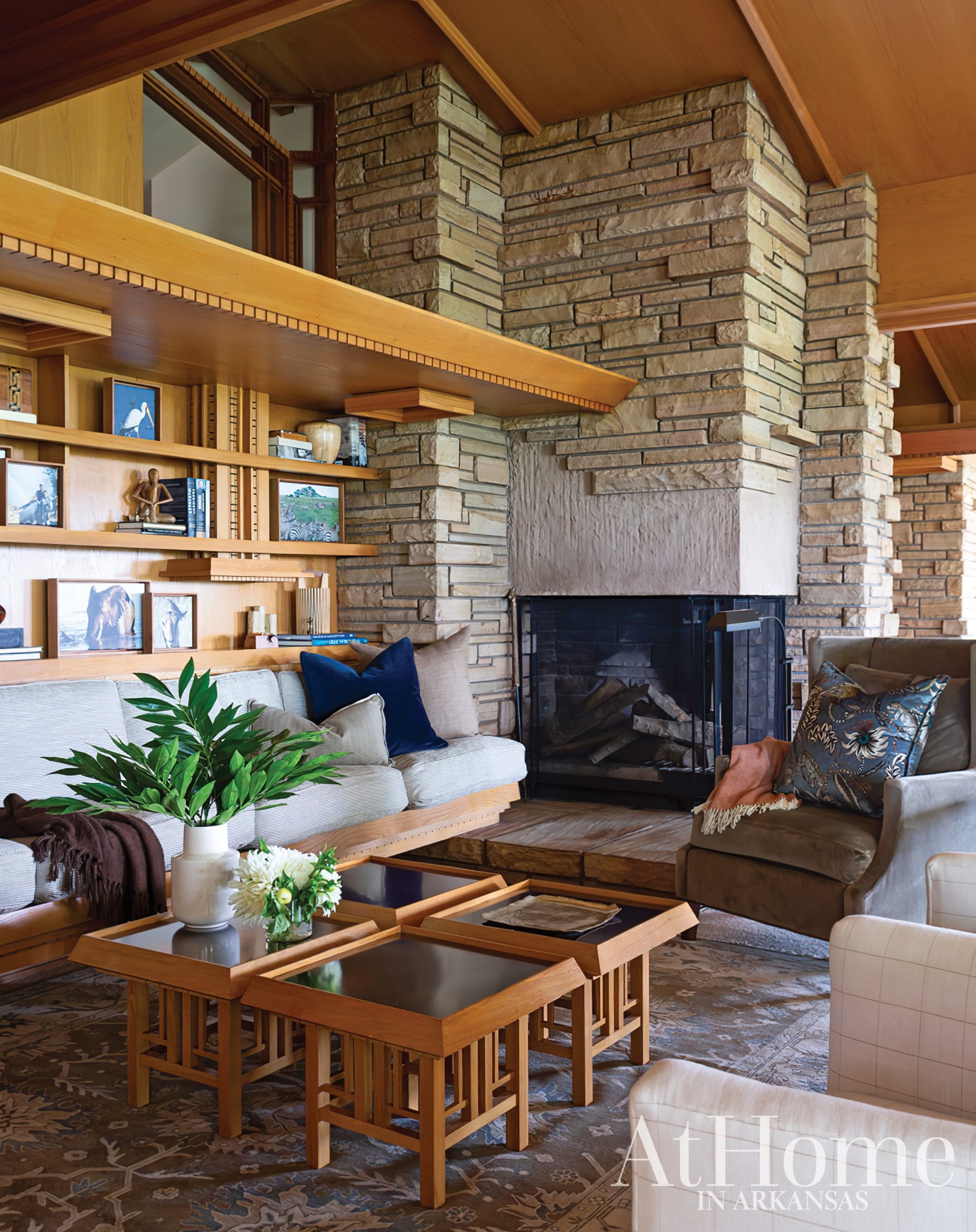 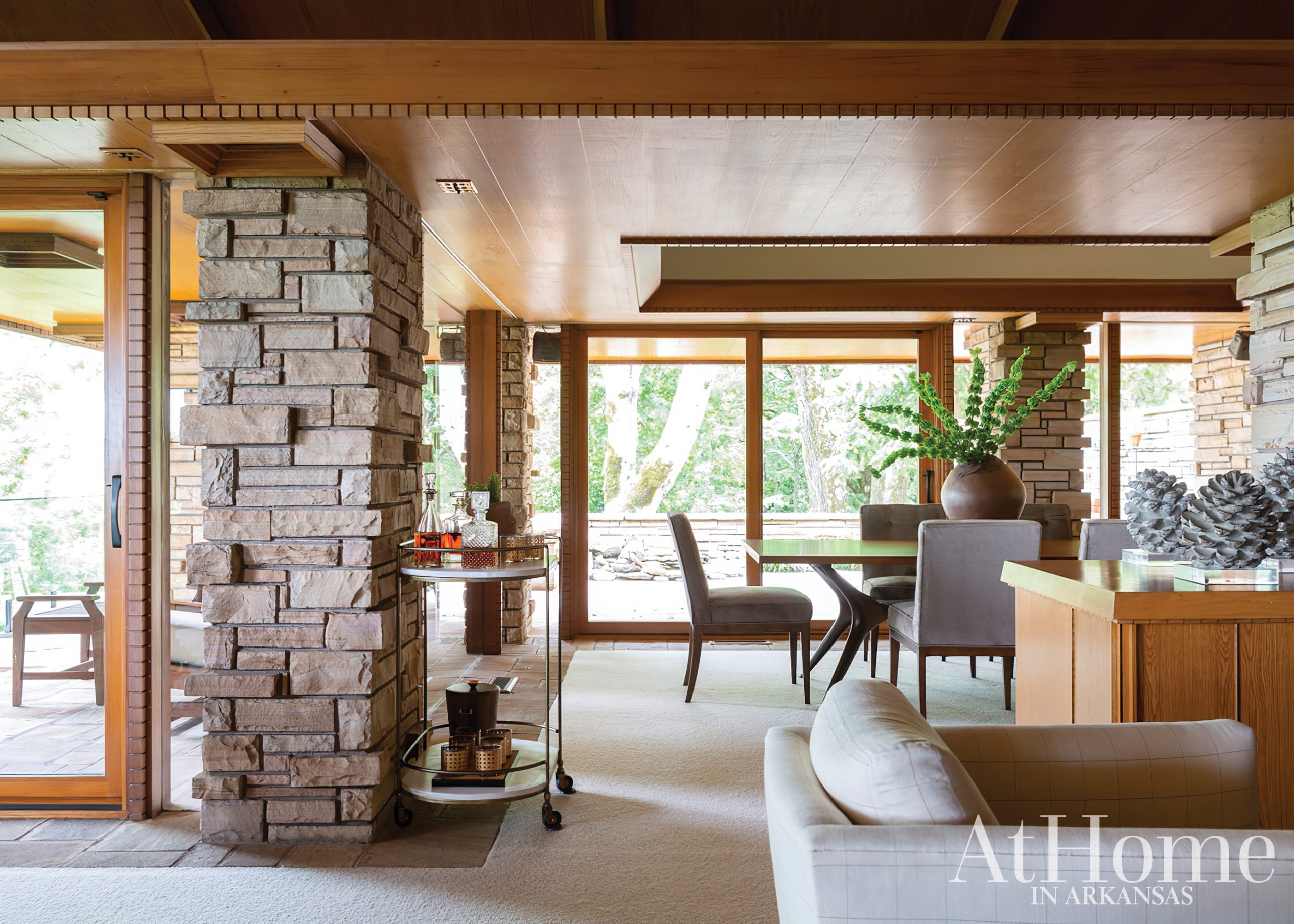 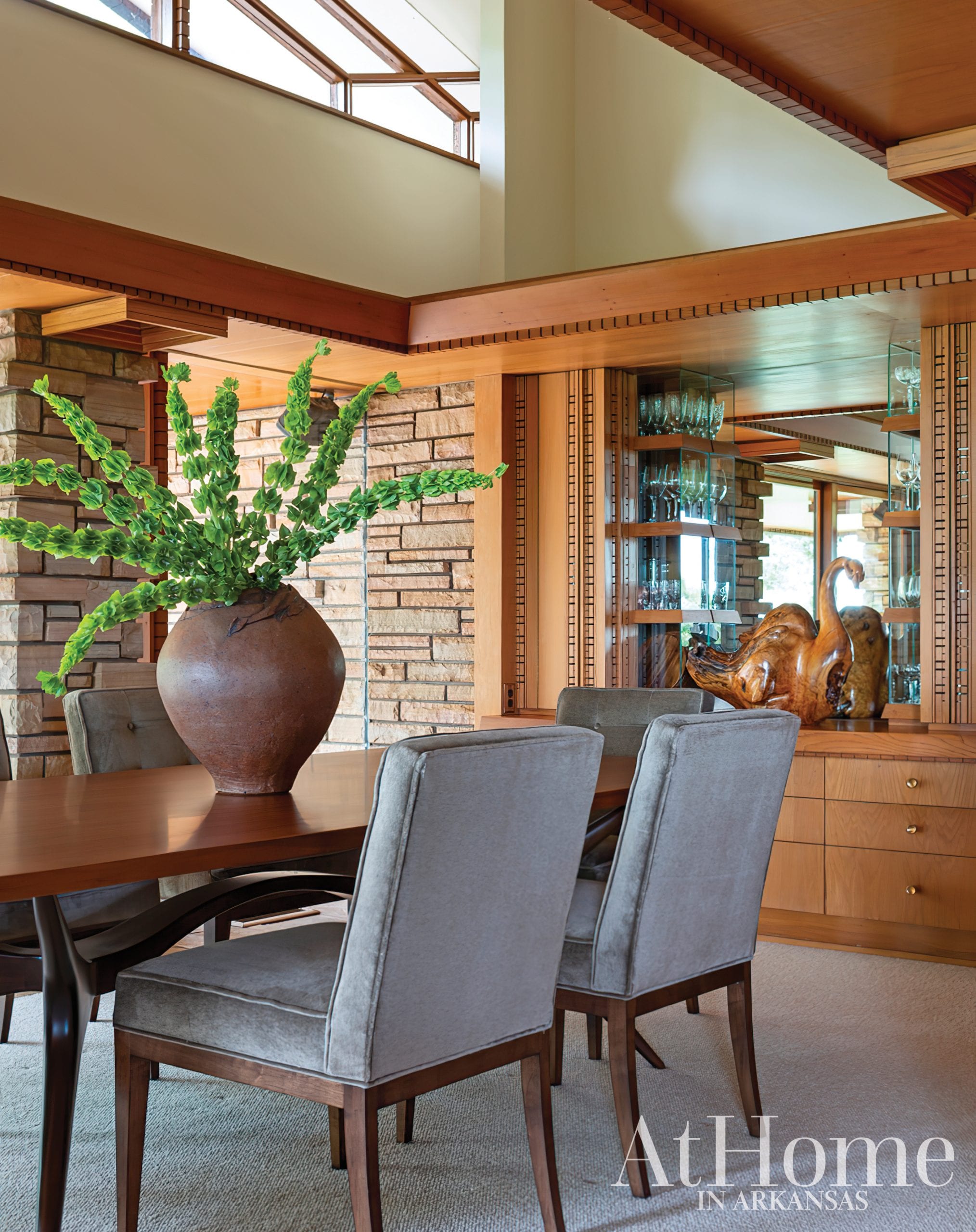 True to Nature
Brittany notes the kitchen was not a home’s gathering place when this house was designed, thus the galley style remained with only minimal updates—including new appliances and stainless steel countertops. “We could have gone with stone or quartz, but that wouldn’t have fit the purpose,” Brittany says. “In this house, the countertops were meant to be utilitarian and not a statement piece.” In the dining room, a custom table by Tommy Farrell Custom Furniture takes center stage. Faux mohair-covered chairs provide comfortable seating for 10. Original stone and woodwork on the back bar are complemented by a swan sculpture that belonged to one of the owner’s mothers. 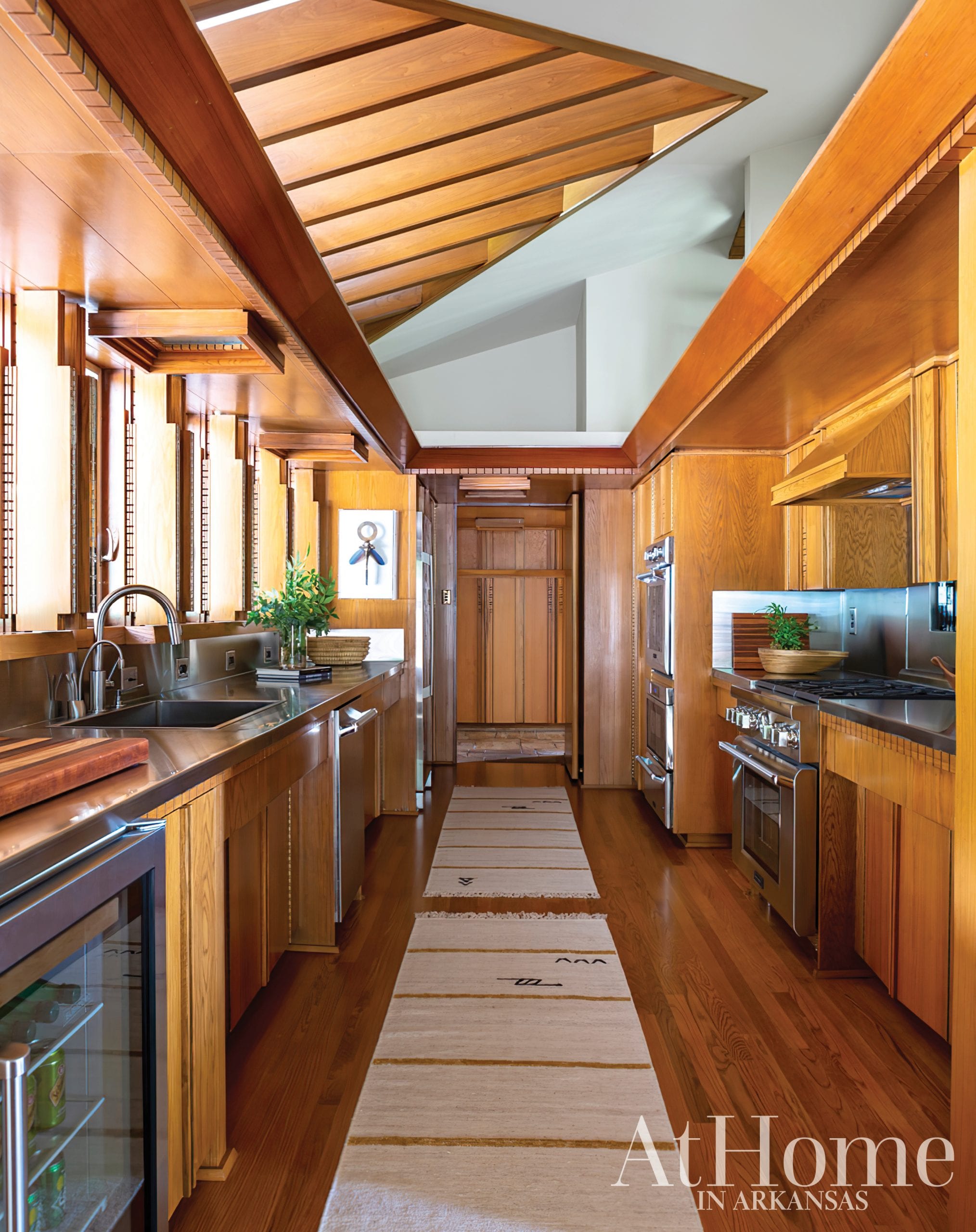 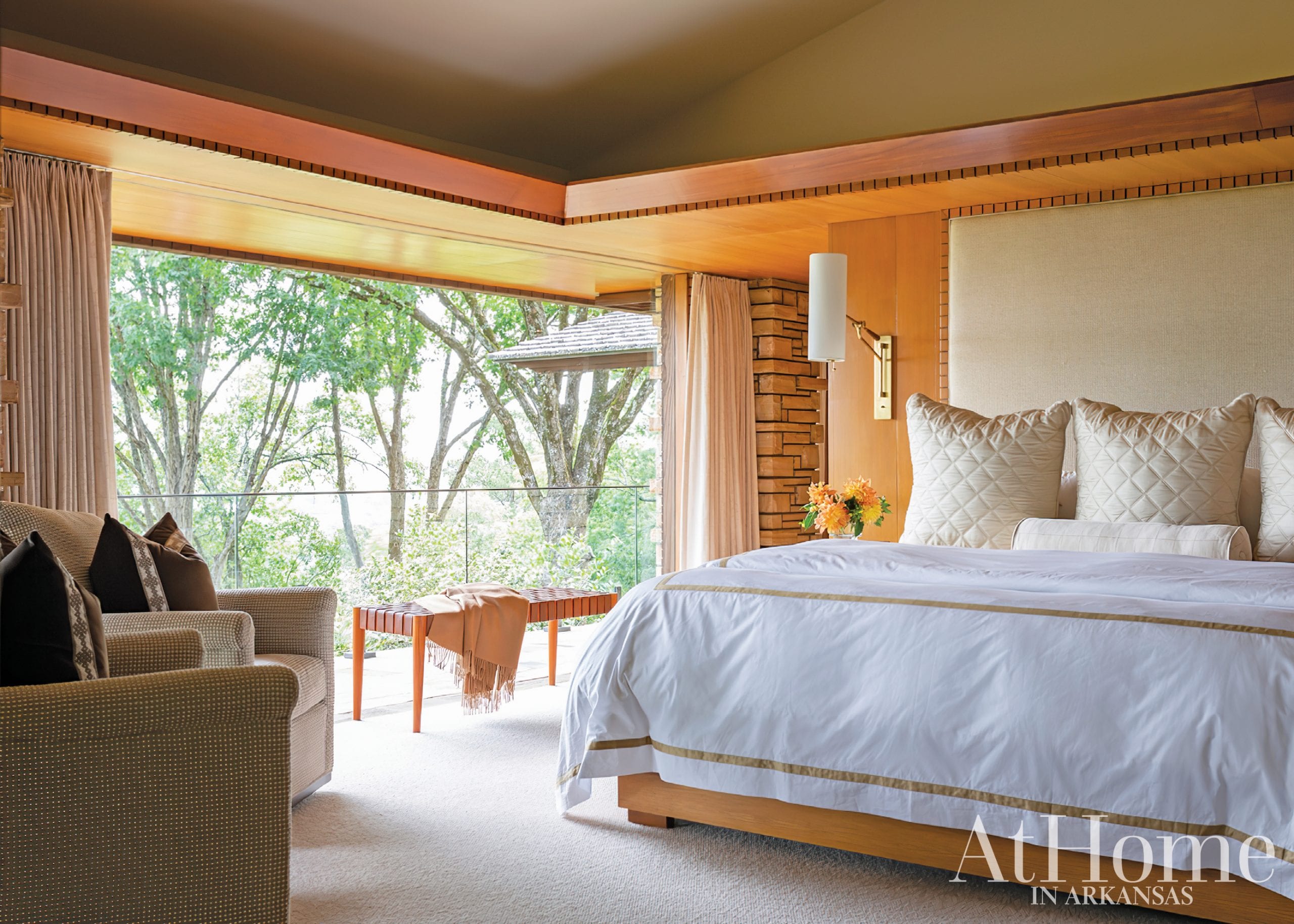 Artful View
Rodney and the owners wrestled with the decision to change the railing outside the master bedroom. Prior to the updates, there was only a 20-inch guard around the perimeter, which was not safe for the couple’s grandchildren and was also not up to current code. During the process, they realized how nice an unobstructed view would be from the bedroom and began to research glass railing options. The solution allows the wooded property to become the room’s artwork. Simple furnishings and neutral bedding complement the original woodwork and direct the focus to the window. “We kept the palette simple and unified so when you look out, the view is what you see,” Brittany says. “This house feels like it’s enveloped in nature. 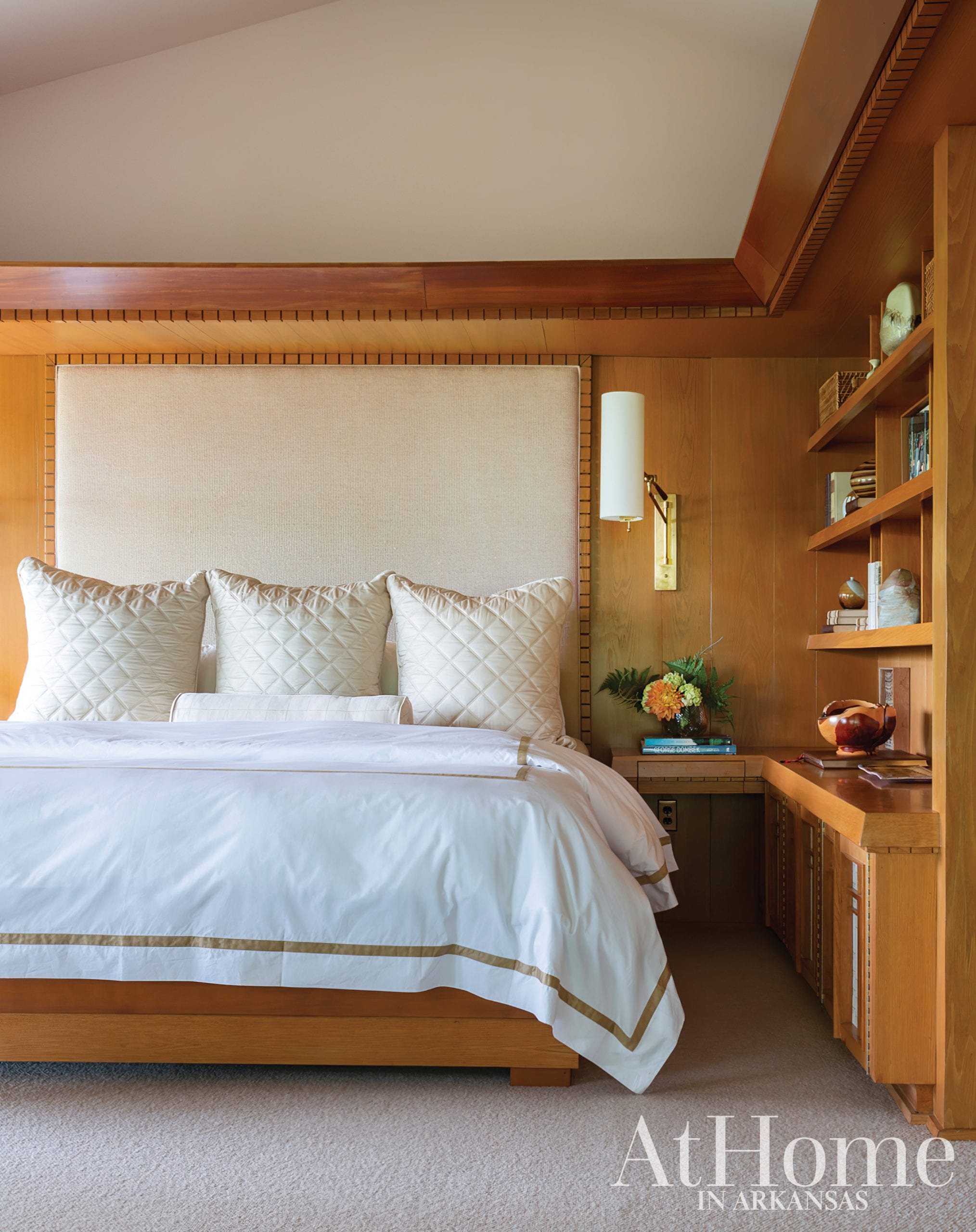