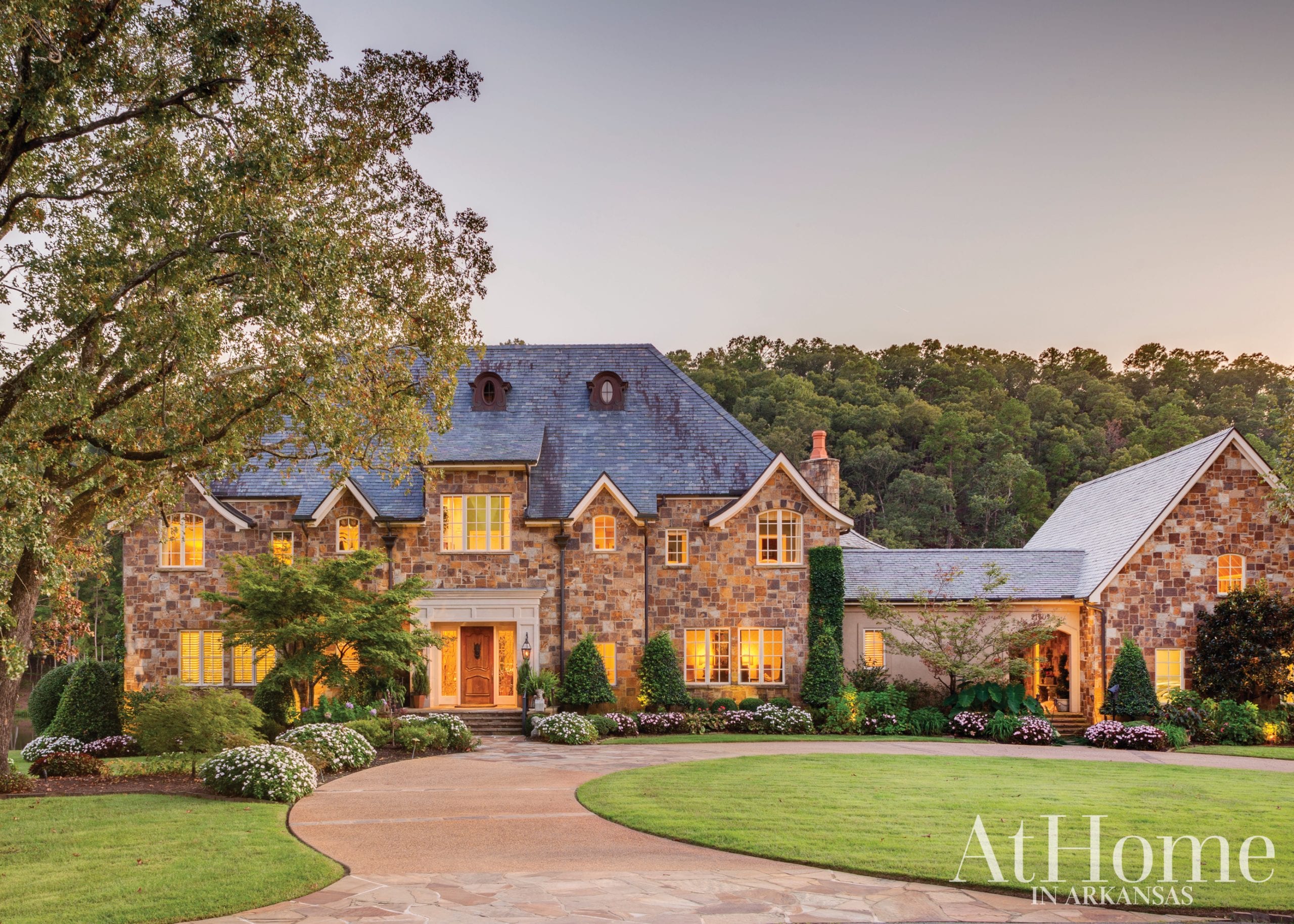 After years of living in a neighborhood near the city’s center and renting a garden plot at Little Rock’s Two Rivers Park, Leslie and Dr. C.D. Williams were thrilled to find a “for sale” sign on 40 acres in west Little Rock. With two houses, a pond, and an abundance of land, they knew their days of hauling shovels and seed to their small community beds were over. “This place really took my breath away when I first saw it,” Leslie recalls.

However, at that time, the grounds were not finished; there was only limited landscape around the main house and guesthouse as well as the pond. “I had great visions for this place, and they grew,” Leslie says. After needed updates, such as paving the road and adding pin oak trees for shade in the backyard, the Williamses installed a raised bed garden. “I spent all my days—probably 40 hours a week—working in the yard,” Leslie says of her drive to bring the vision to life.
Over the past 15 years, one project has led to another and numerous additions have been made to the rolling landscape. For example, almost a decade ago the couple added a large perennial bed, which Leslie says was originally for cut flowers but has taken on a more stately look with the planting of knockout roses. They also worked with landscaper Joel Villa to dig out a marshy creek, which gave them reason to build a bridge over its flowing water as well as waterfalls that feed from the creek. They enjoyed that process so much they decided to make a coop for their chickens with his help. The Williamses also installed an Earth Shelter greenhouse placed down into a dug-out portion of the ground. This offers them a place to plot their next project and pot their next seed year-round. 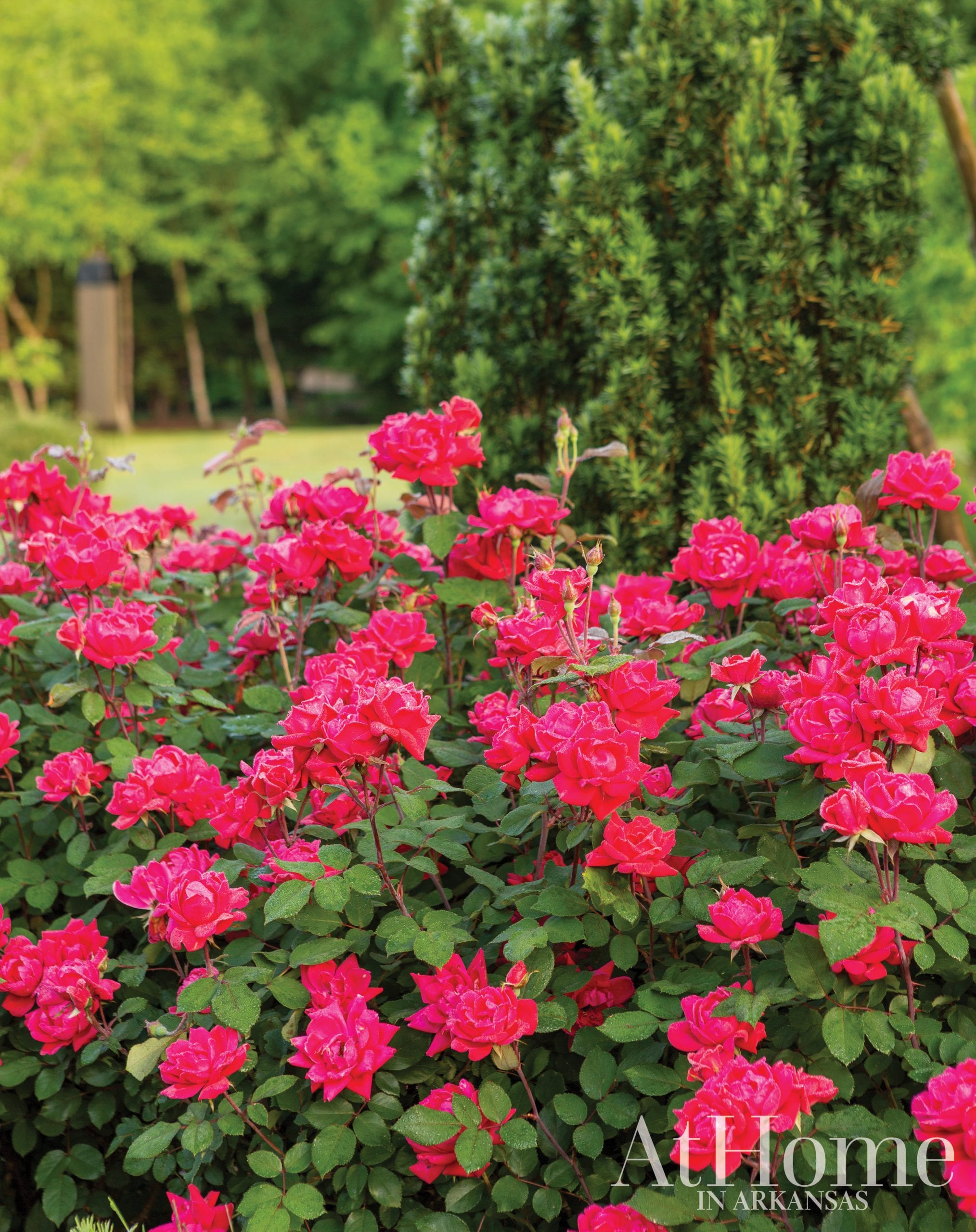 Knockout roses provide color with unparalleled ease of care in an elongated perennial bed on the property. 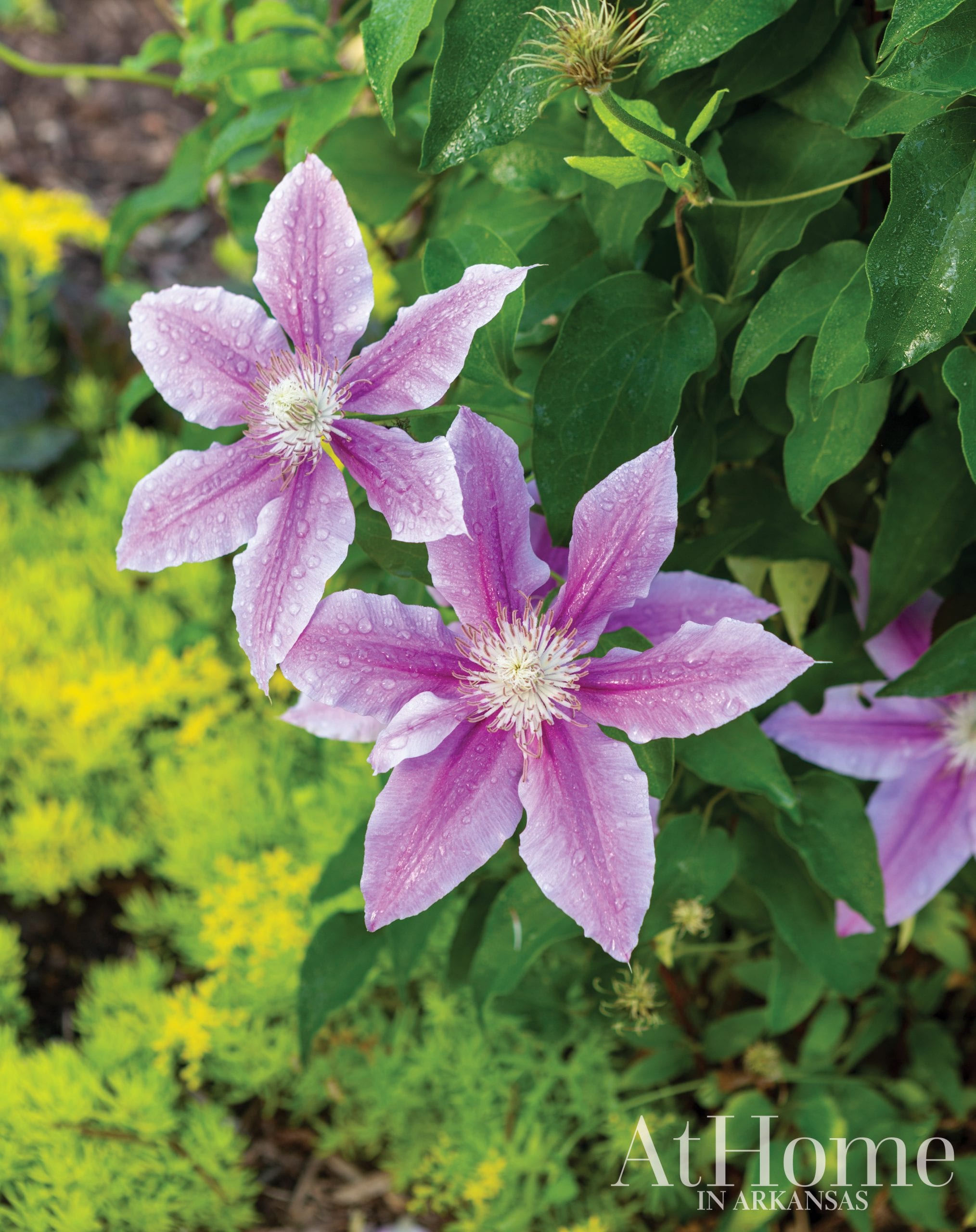 Clematis (above) and peonies (below) are two colorful favorites found in the garden. 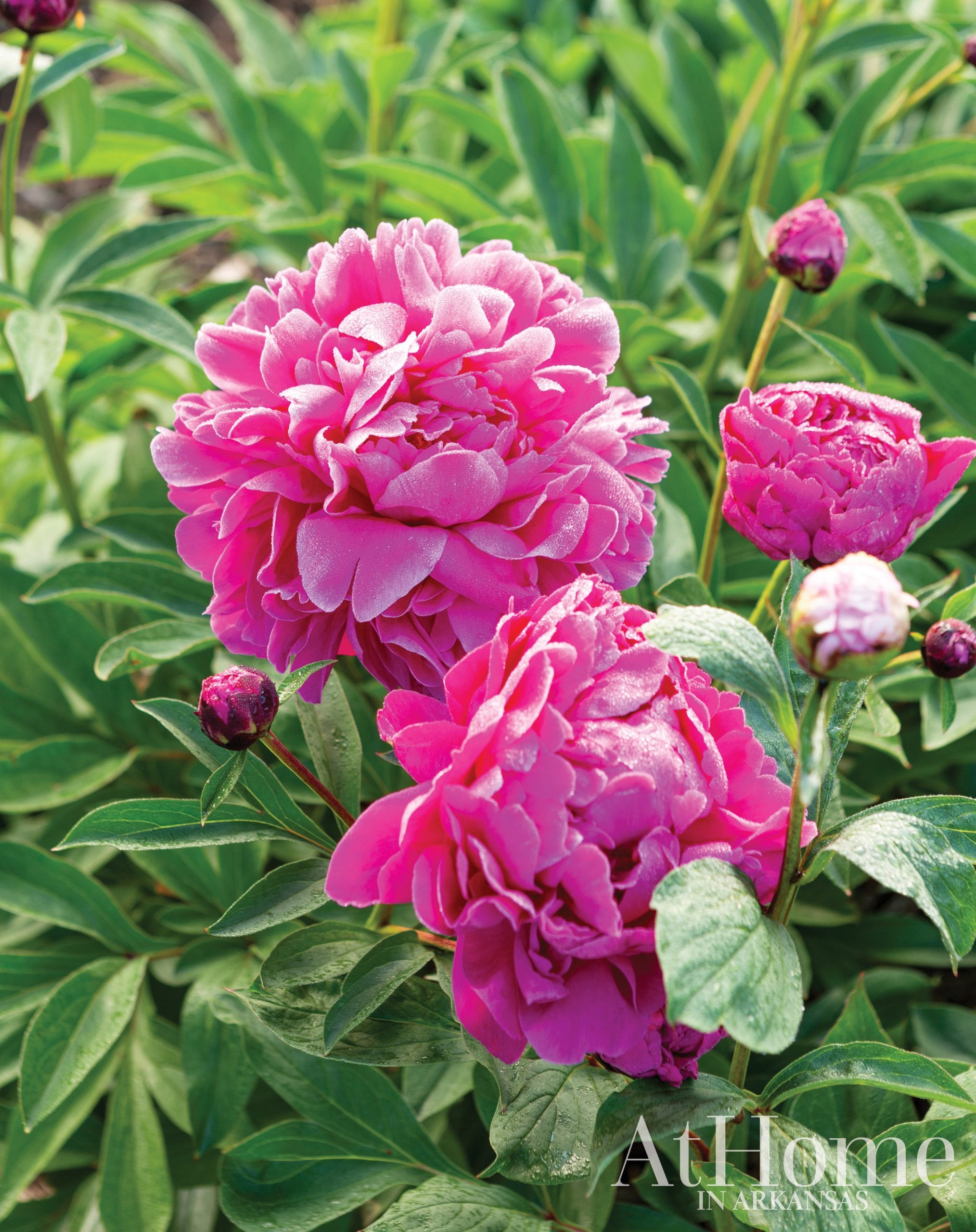 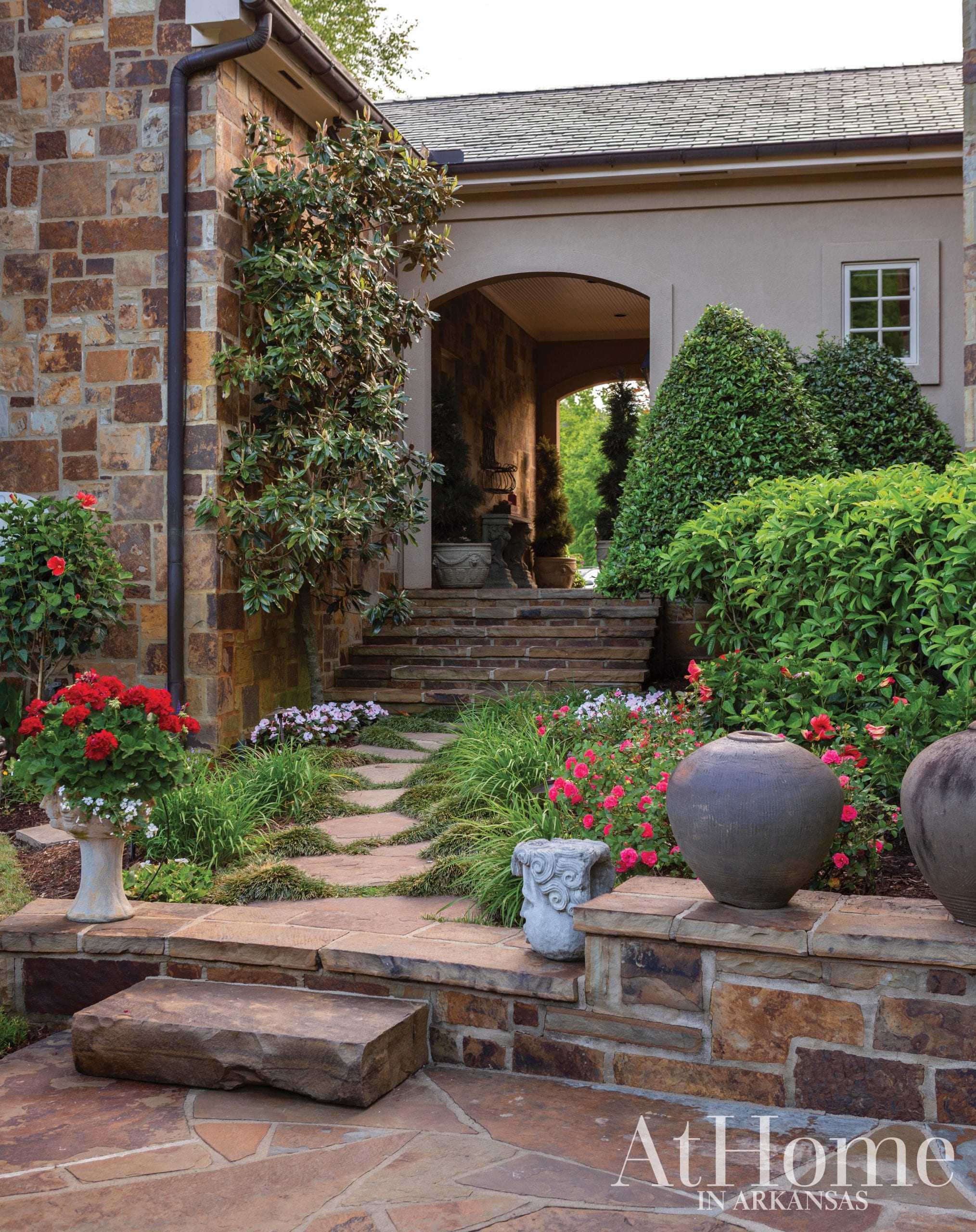 Layered Design
A breezeway between the garage and main house also offers access to both the front and back yards. Since the covered area receives no sunlight, the potted spiral fir trees are artificial. The magnolia tree, seen at left, is an espalier that adds contrasting texture to the stone wall. Coral drift roses,
red geraniums, ‘New Guinea Magnum White Blush’ impatiens, and a coral hibiscus add color in the foreground, while sweet olive trees are a constant evergreen. 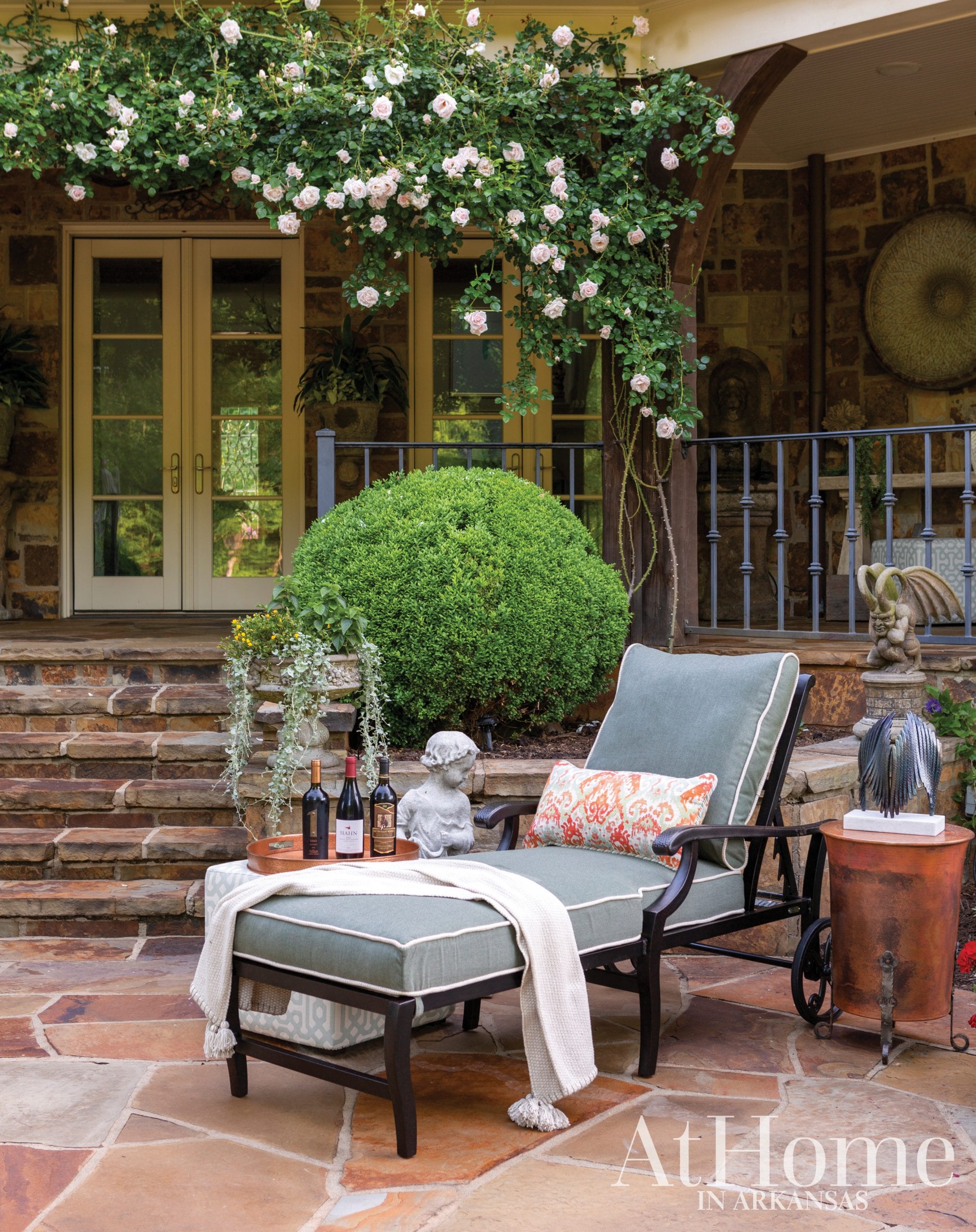 On the Climb
‘New Dawn’ roses (above) span a portion of the covered porch where French doors lead from the living room to the terrace beyond. The concrete statues are part of Leslie’s collection. 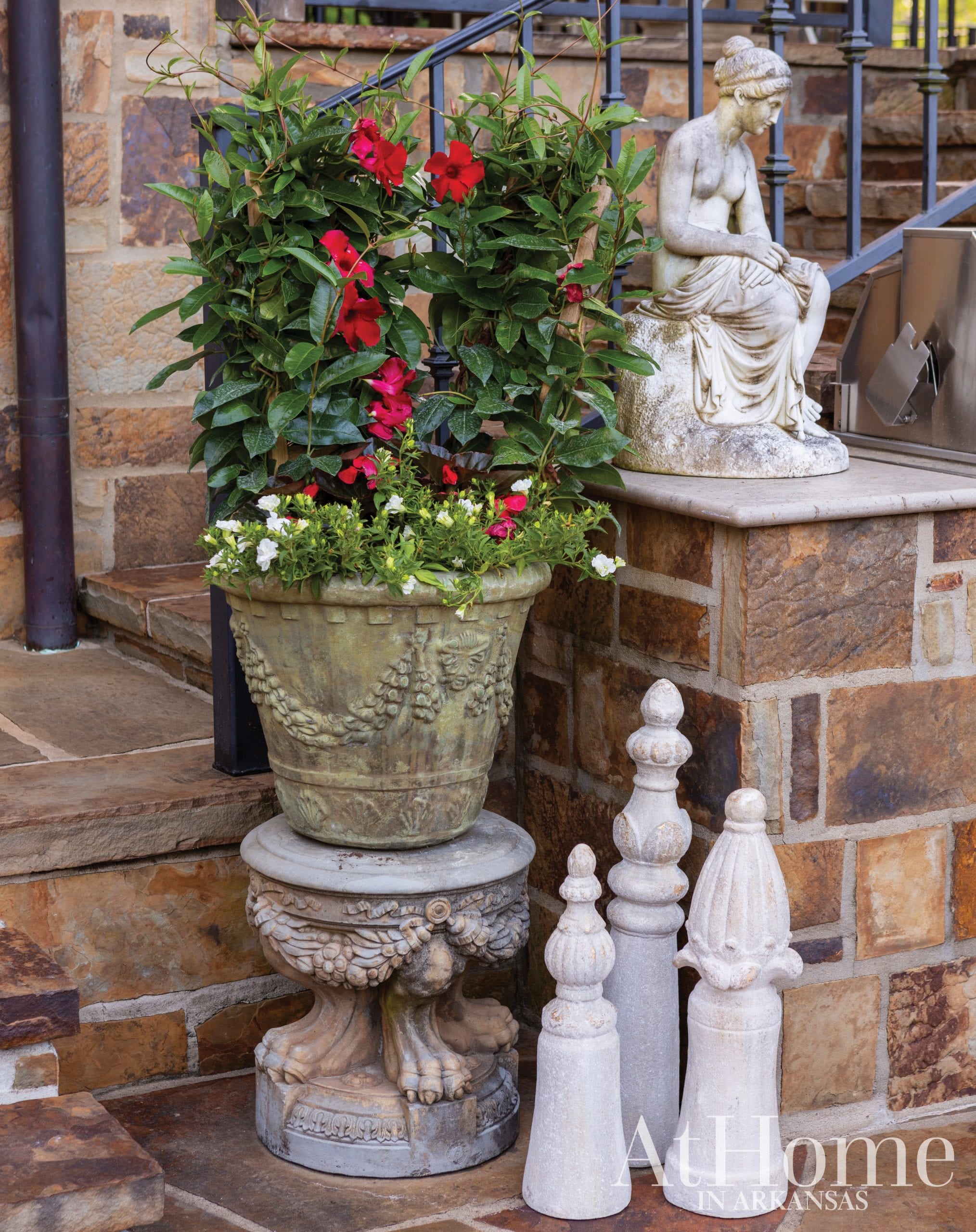 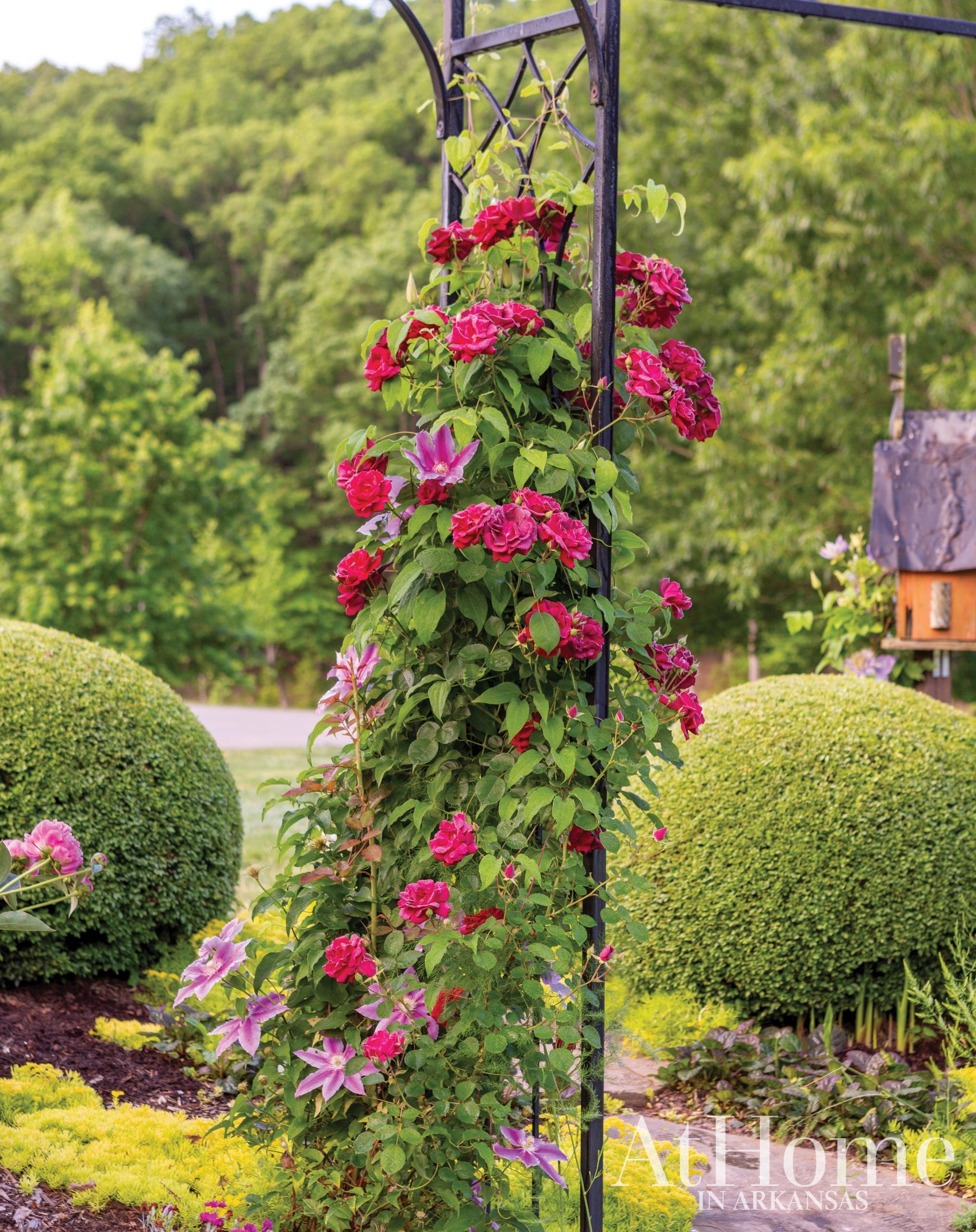 A mix of clematis and ‘Joseph’s Coat’ roses ascend a trellis in the perennial flower bed. 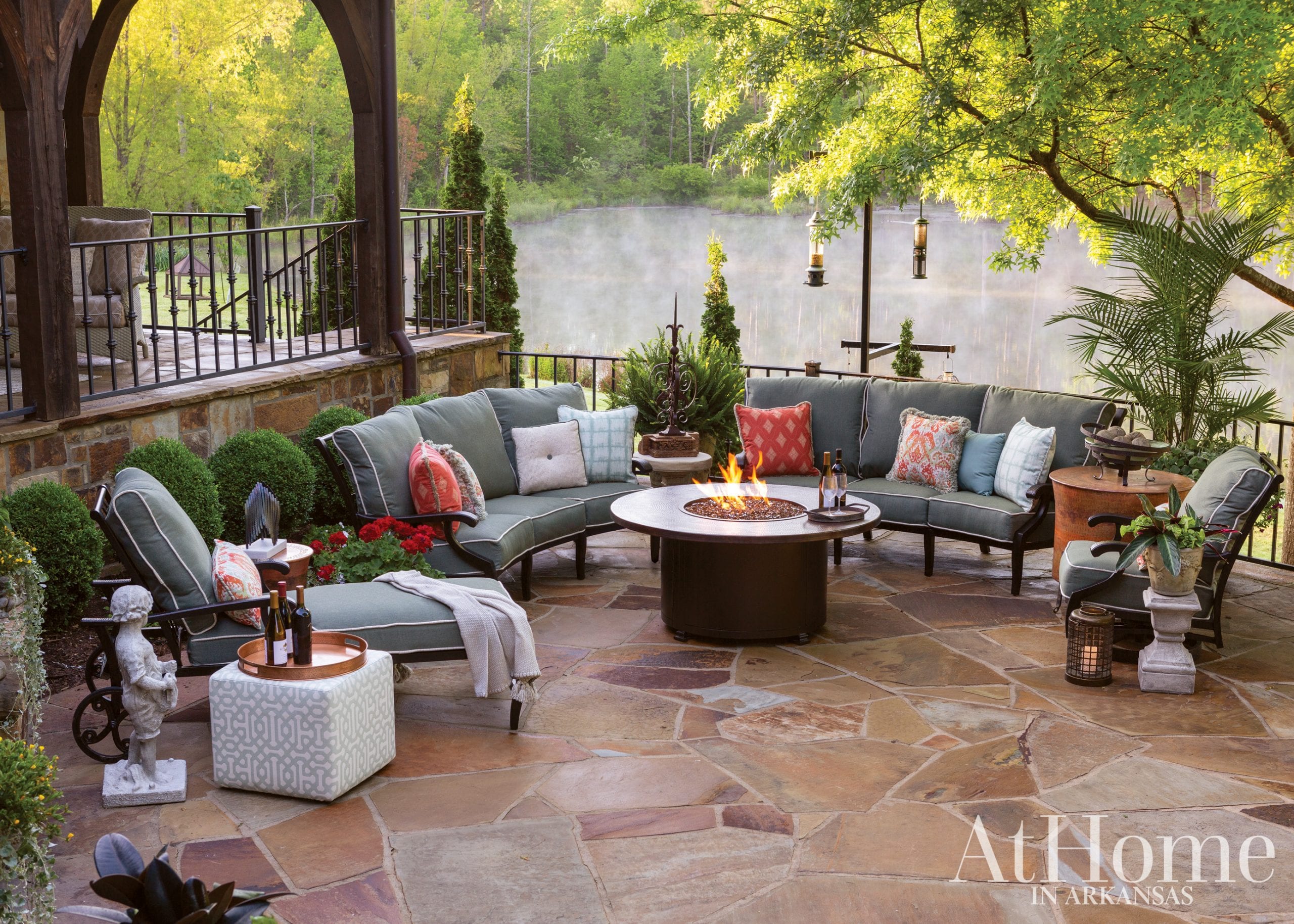 Room to Relax
The back of the home has a dual-level terrace with views of the stocked pond. Outdoor furnishings from Ken Rash’s Arkansas, including a firepit, make it the perfect spot to sip coffee and watch the fog roll on the water in the mornings. 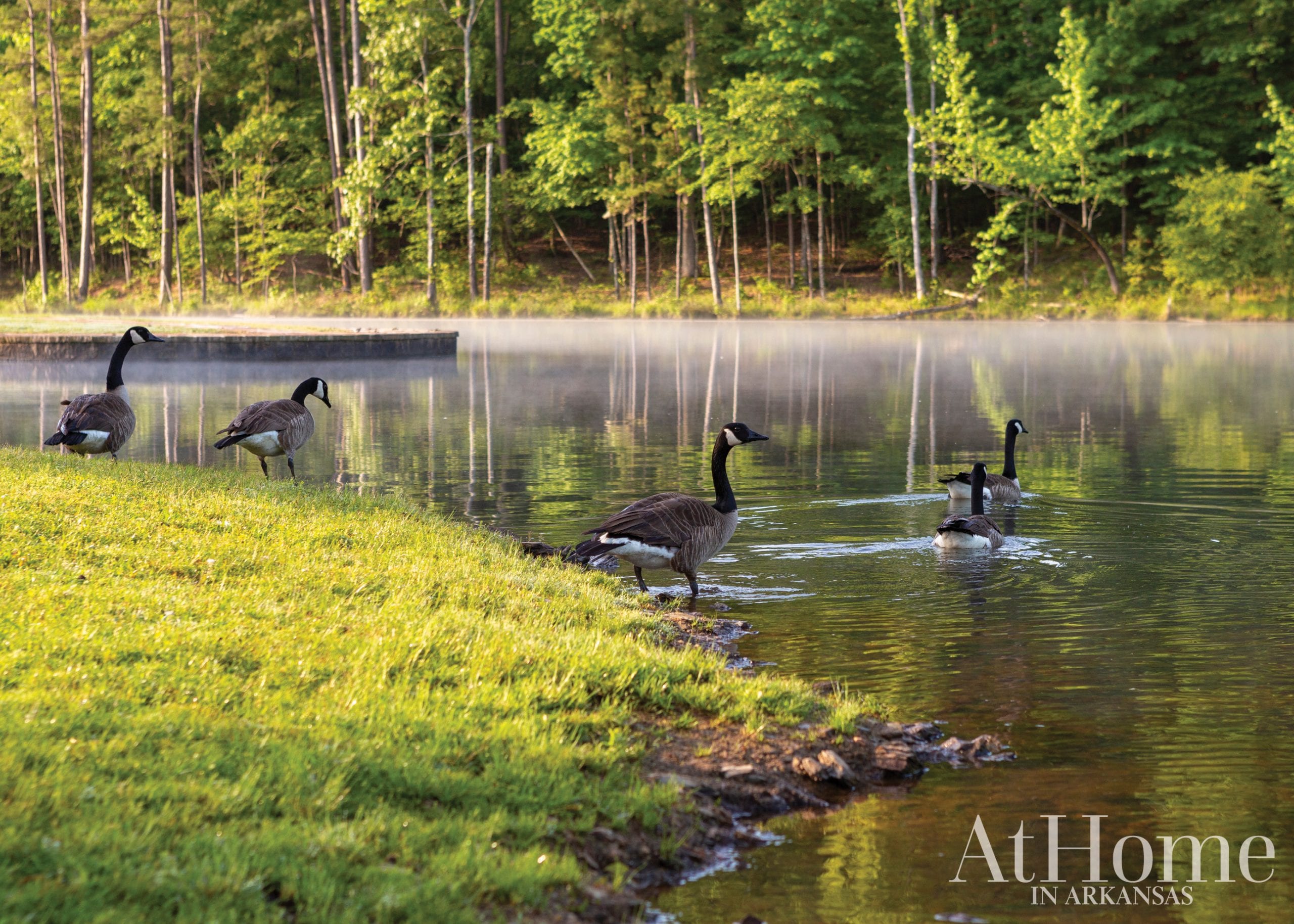 Geese, ducks, turtles, and deer can often be seen at different vantage points on the property. 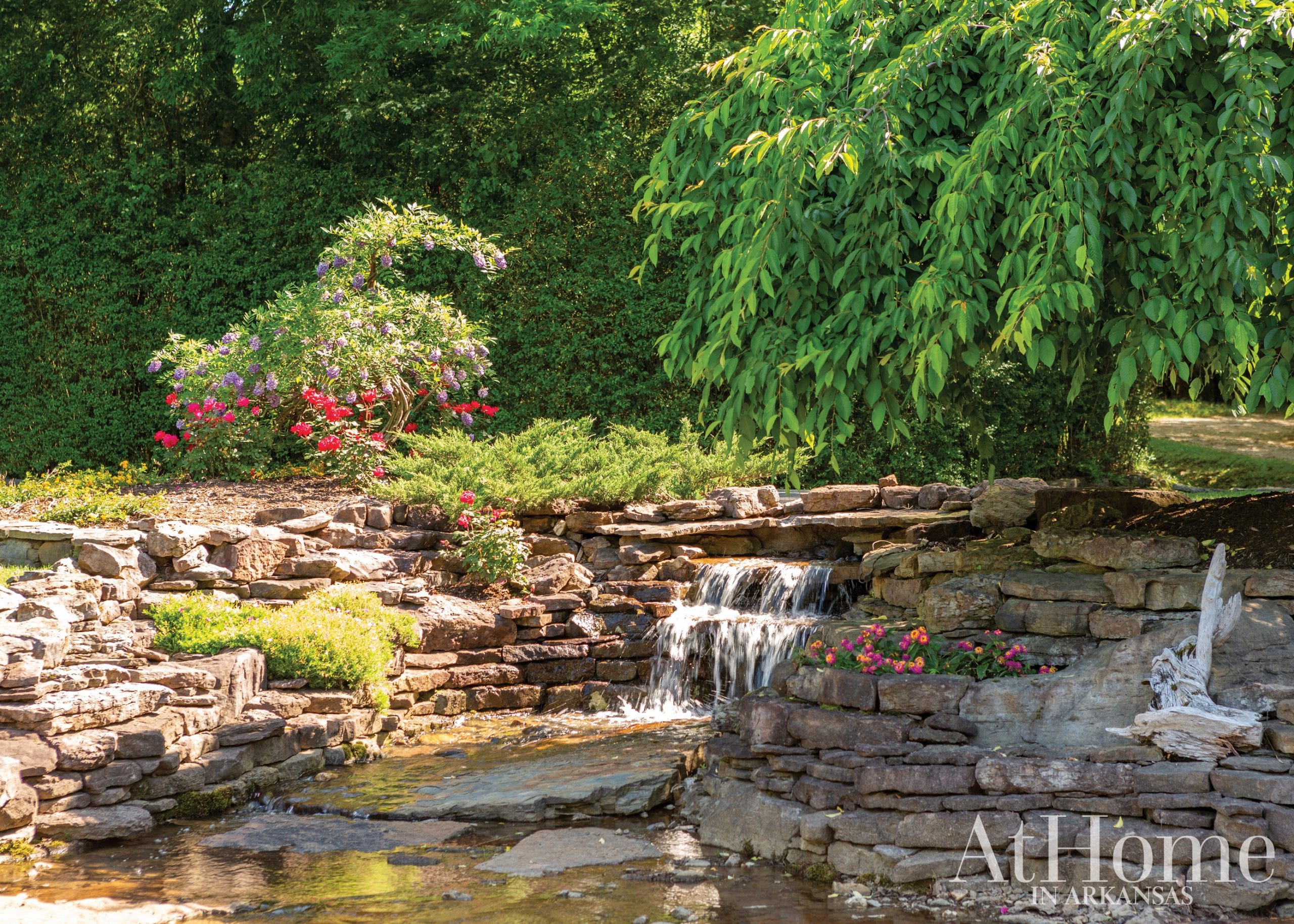 Natural Additions
A waterfall, one of two on the property, is fed from the nearby creek. A weeping cherry tree, wisteria, knockout roses, and small beds filled with lantana highlight its beauty. To provide a clear path from the house to the garden and chicken coop, the Williamses constructed this bridge. Outfitted with roll-down shades, lighting, and comfortable seating, this is also a nice place to enjoy a glass of wine on spring evenings. 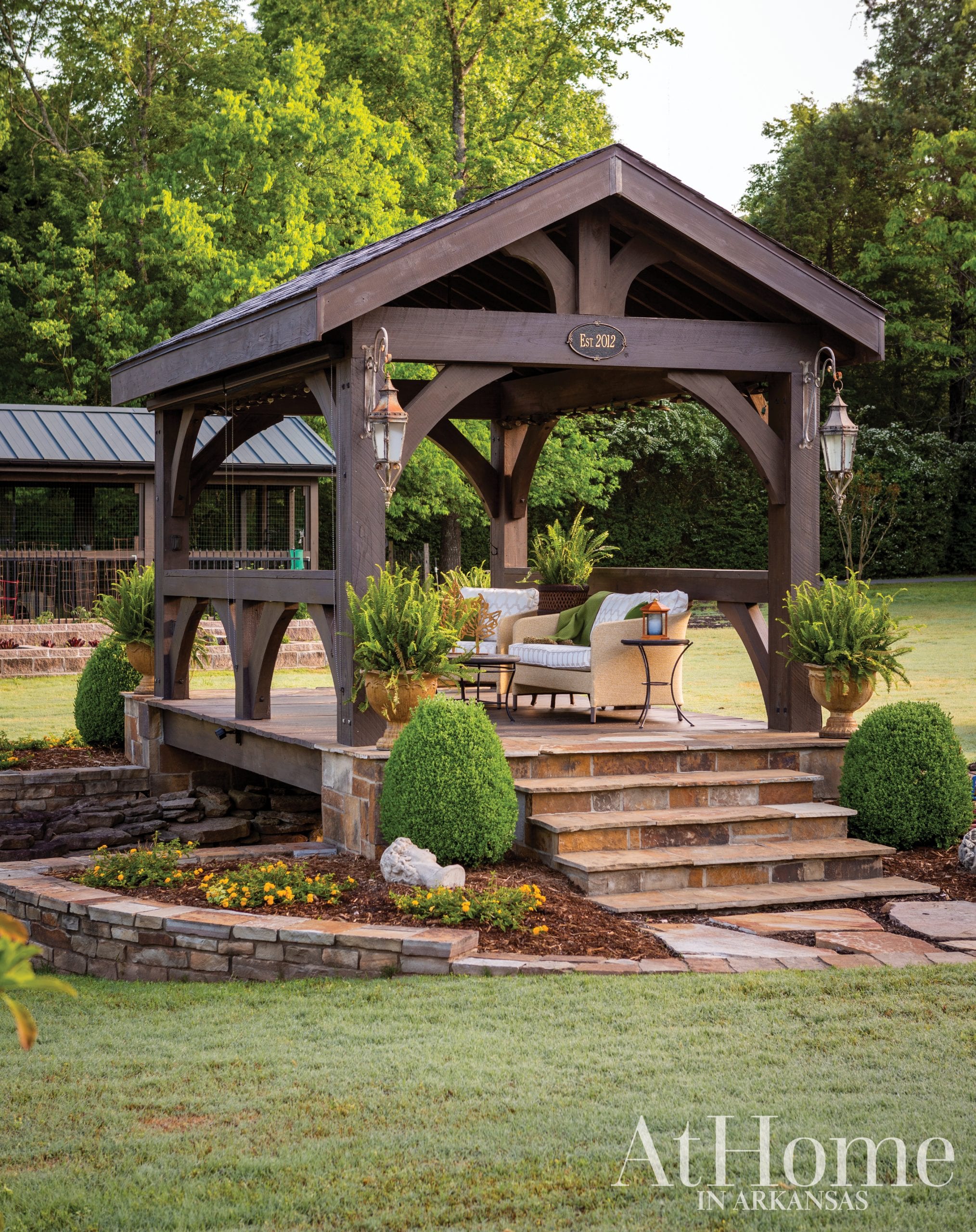 The home and grounds, which the Williamses refer to as Belle Maison, are now available for tours during Symphony Designer House XXV, which runs June 18 to July 19. For more information, visit arsymphonydesignerhouse.com.