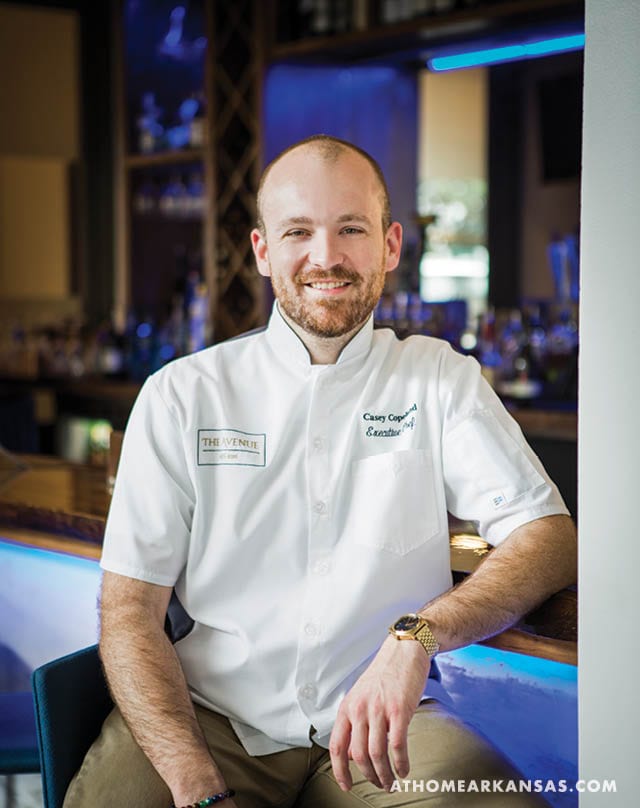 Chef Casey Copeland is carving a new path when it comes to dining in downtown Hot Springs. The Texas native is no stranger to the Arkansas food scene having served as executive chef at Little Rock’s SO and been named the winner of the 2015 Arkansas Hospitality Association’s Iron Chef competition, among other notable posts. Copeland feels as though he has found his niche in The Natural State, and now is hoping to make locally sourced cuisine a favorite for diners at The Avenue, his popular new restaurant located inside The Waters Hotel. “I want to bring a better dining scene to this area. I want to be able to use all the local farms we can and also grow produce onsite here for use,” Copeland says. “I’ve built some relationships with local farmers, and I have transitioned in my cooking. I use less seasoning and instead take these beautiful ingredients and highlight them with just a few notes.” 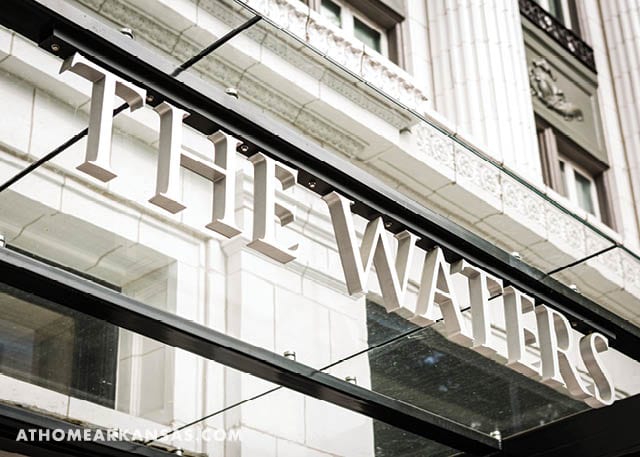 The Avenue currently offers dinner service Wednesday through Saturday with a menu that changes every five to six weeks according to Copeland. “I love to have something new and I don’t let things get stagnant,” he says. Examples from their current offerings include grilled free-range chicken, Southern paella, and duck confit tacos as well as the filet and scallop recipes seen on the following pages. Each dish is served in a tapas or shareable-plate style, encouraging diners to linger, converse, and enjoy the experience. In mid-April, they also began hosting a Sunday brunch which Copeland says allows him to get back to his roots with favorites such as biscuits and gravy, breakfast tacos, and eggs benedict—all at $6-15 per plate.

As for the aforementioned onsite garden, Copeland already hosts hives of bees on the rooftop, allowing him to produce his own honey and he has plans to install tower gardens that will also supply the restaurant. Equally exciting are the owners plans for a rooftop bar, which will allow guests to take in views of the spa city. “There was a rooftop bar near a place I worked in Austin and it was always the place to be,” Copeland says. “I want to be a part of bringing that here. I have some great ideas coming forward; I have a great staff and ownership behind me, and we’re excited about what’s happening here,” the chef says. 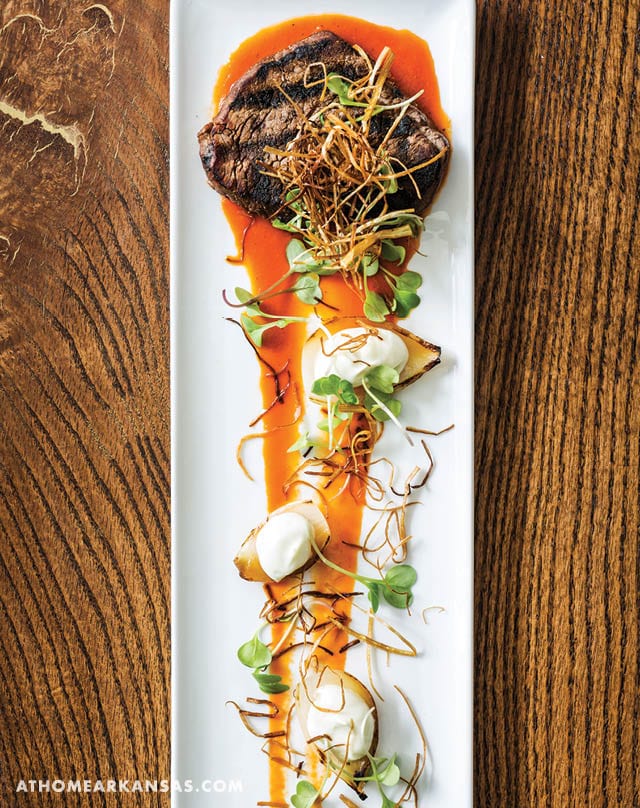 Cold Smoked Filet
PREPARATION
Start smoldering wood chips in a smoker grill without actually starting the fire. Place filets in the grill chamber away from any possible heat, but still allow the smoke to surround them for 3-5 minutes. Remove from grill. Allow the meat to rest in the refrigerator until you are ready to grill it. Grill on an open fire to desired level.

Whipped Cauliflower
INGREDIENTS
3 cups cauliflower florets
heavy cream (enough to cover cauliflower)
¾ tablespoon salt
1 teaspoon granulated garlic
PREPARATION
Cook all ingredients in a pot on medium heat until cauliflower is very tender. Transfer to a blender and puree. Place in a container in refrigerator to cool. You can spoon or pipe onto plate or into charred onions.

Red Pepper Coulis
INGREDIENTS
5 red bell peppers; charred until black on all sides,
and then deseeded
1 carton of chicken stock
½ teaspoon granulated garlic
½ teaspoon onion powder
½ teaspoon smoked paprika
1/8 teaspoon cayenne
zest of one lemon
PREPARATION
Place prepared bell peppers in a large pot; cover with chicken stock and spices and bring to a boil until slightly reduced. Transfer to a blender and puree the bell pepper mixture until smooth. Add the lemon zest and pulse a couple times to finish.

Charred Onions
INGREDIENTS
1 yellow or white onion
olive oil
salt
pepper
PREPARATION
Remove the skin of one yellow or white onion. Rub with olive oil, salt, and pepper. Cut in half and roast in oven at 350°F for 10 minutes. Remove and transfer to a smoking hot pan to char the flat sides and blacken the edges. Cut into strips to act as cups for the cauliflower whip on the plate. 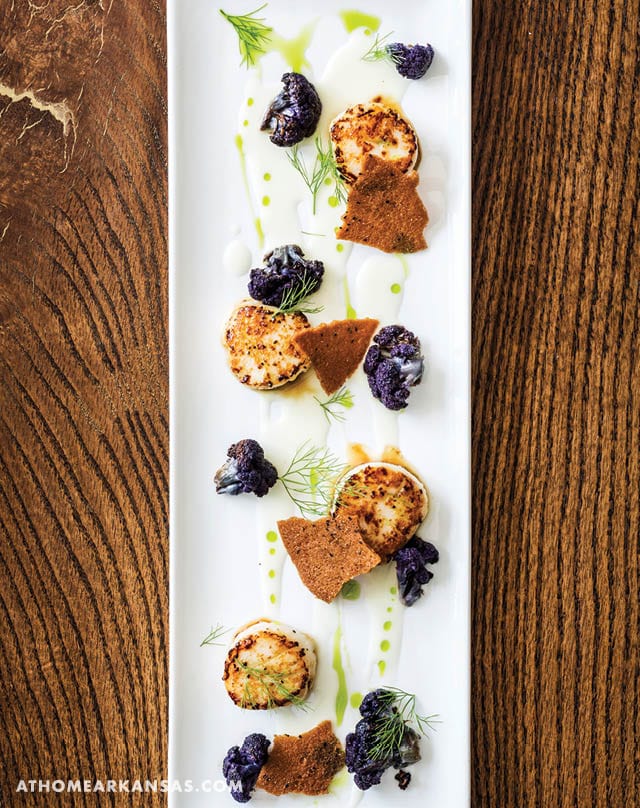 Spinach Oil
INGREDIENTS
6 cups spinach
3 cups canola oil
1 teaspoon salt
cheesecloth
strainer or China cap
PREPARATION
Blanch spinach in boiling water for 45 seconds. Remove and place in an ice water bath to shock, so the bright green color remains. Strain, making sure to remove all ice and water; use your hands to ring remaining water out of spinach. Place in blender with oil and salt. Puree until smooth. Place cheesecloth inside of a strainer, creating a lining through which the spinach oil will pass. Hold the lined strainer over a large bowl or container that can catch the oil, and begin to pour the puree through the strainer. Allow to drip until the beautiful green oil has finished running.

Black Pepper Tuile
INGREDIENTS
¾ cup sugar
3 egg whites
½ cup butter, melted and at room temperature
½ cup flour
coarse ground black pepper, to taste
PREPARATION
Mix all ingredients in bowl, and cool in fridge for two hours. Line a sheet tray with parchment paper. Spread a very thin and consistent layer of the mixture onto the tray. Sprinkle with black pepper. Cook in the oven at 375°F until golden brown. Let cool to room temperature, and then break into bite-size pieces.

Sea Scallops
Note: These should be cooked last.
INGREDIENTS
sea scallops
salt
pepper
melted butter
PREPARATION
Salt and pepper each side of the scallops. Place a non-stick skillet on medium-high heat until very hot, and then coat with melted butter. Sear both the top and bottom of the scallop, but do not flip until the first side has a nice brown crust. Place the scallops on a plate with the tuile, cauliflower, and coulis. Drizzle the spinach oil over the finished plate.