Old world is a term that comes up often in Bruce and Joan Johnson’s line of work. As owners of Fayetteville-based White River Hardwoods, a company known for its embellished moldings and hand-carved architectural elements, understanding classical design is an essential part of their business. To acquire this old world authenticity, the couple frequently travels to Europe—touring, studying and seeking inspiration. Eventually, after years of visiting castles and centuries-old manors, they were inspired to bring the look back home.

“We’d see these castles in mountain towns in Europe, built of natural stone and tucked into the hillside, and that seemed possible to accomplish here in the Ozarks,” says Joan. She and Bruce purchased acreage on a mountainside near Fayetteville and constructed the European-style manor house of their dreams. 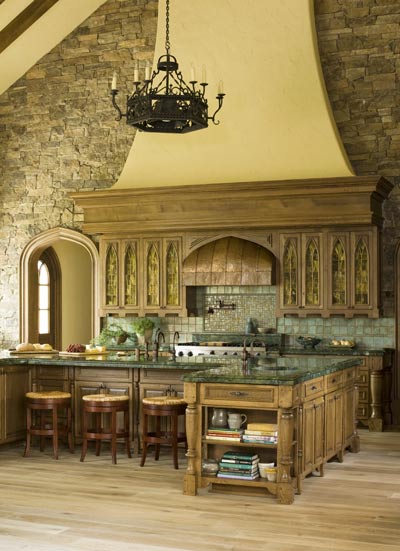 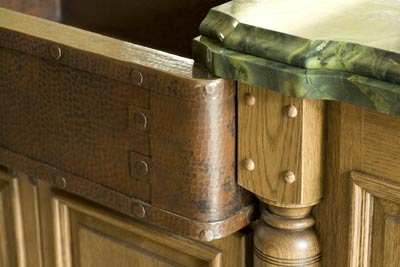 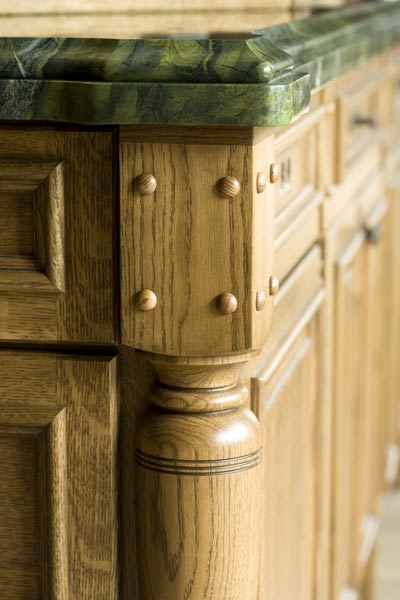 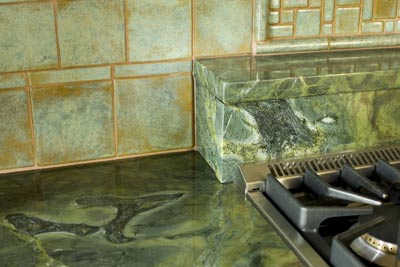 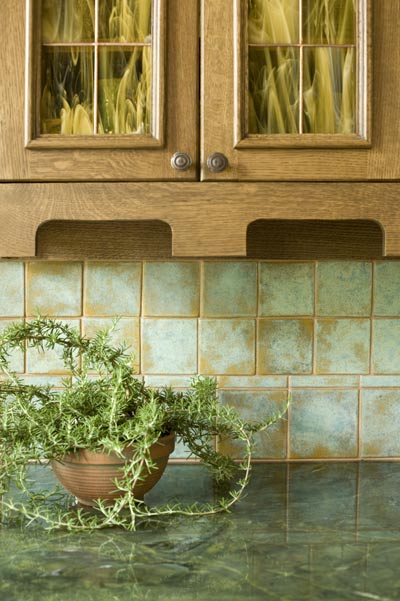 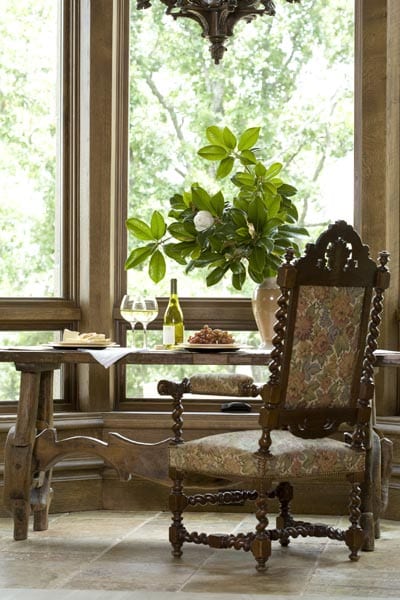 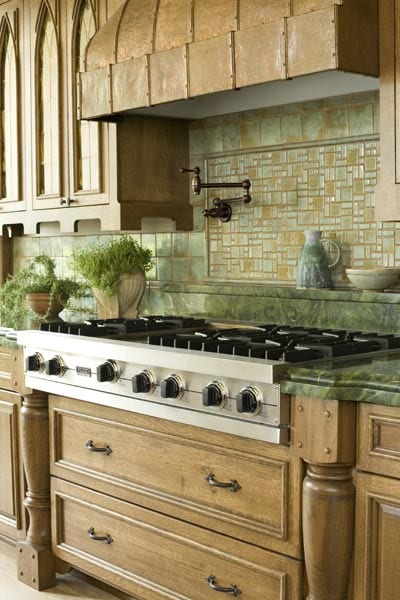 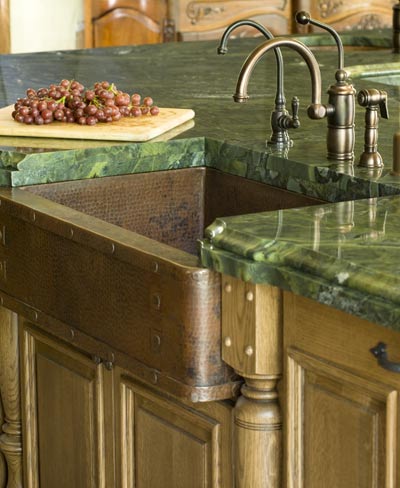 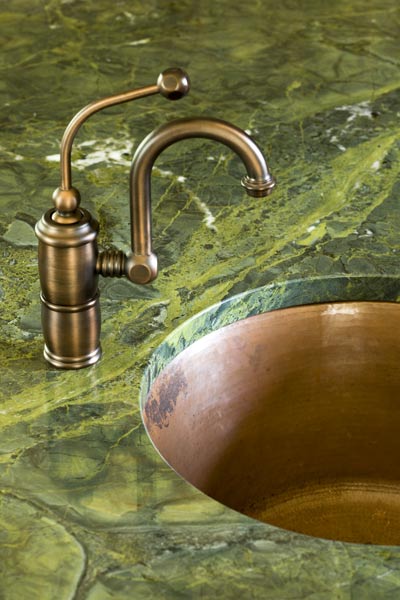 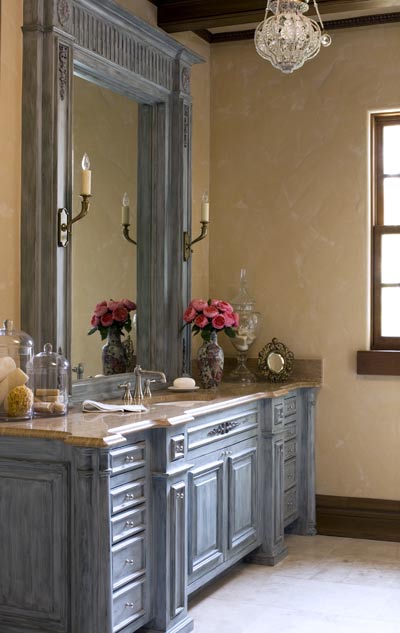 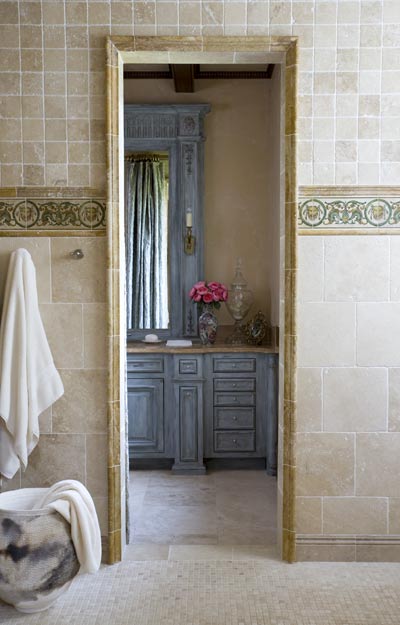 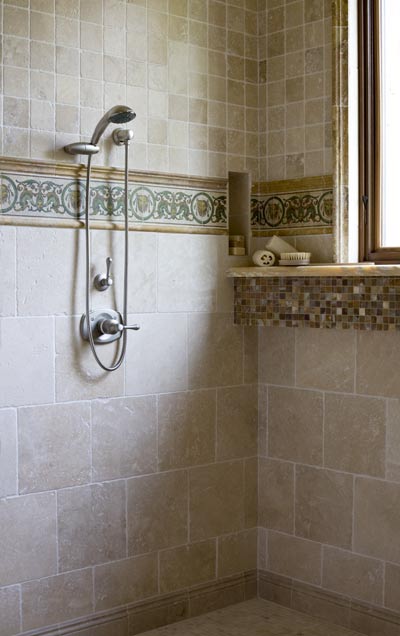 Their travels had also introduced them to a like-minded scholar of classical architecture, Atlanta-based designer David Pearson, whom Joan had met on a drawing tour in Italy. She and Bruce solicited his help in designing the interiors to be authentic but also livable by today’s standards, a concept especially important in the kitchen and bath where modern-day conveniences are essential.

“As in an old English manor house, the kitchen is at one end of the great hall,” says Pearson. “It needed to be functional but it also had to work with the rest of the room.” Since the Johnson’s enjoy entertaining and often share meal times with their grown sons and their families, Pearson devised a large u-shaped island as a gathering place and a central feature in the kitchen area, defining the space yet still allowing open views.

To fit the scale and style of the great hall, Pearson designed the island to look like a grand piece of furniture. “The legs on the island are scaled for the entire room, not just the kitchen,” he says. “And we topped them with thick granite countertops to make the cabinetry feel substantial within the openness of the room.”

Along the kitchen’s back wall, which is made of stone, he added custom cabinetry with inset panes of leaded art glass and topped the range area with a hammered copper hood. Between the two, he worked in a backsplash of handmade ceramic tile in warm shades of blue, green and brown, which both complements the copper and creates an attractive focal point. For consistency, Pearson opted for copper sinks and fixtures as well. And as a final means of fitting modern life within an Old World house, he disguised refrigerator and freezer drawers and other appliances with cabinet panels.

The concept of cabinetry designed to mimic antique furniture carried over to the master bathroom, where Pearson created a vanity that “looks like it could have come out of a farmhouse in Tuscany,” says Joan. Layered with paint and then distressed, buffed and sealed, the vanity combines with the room’s stained ceiling beams, painted and glazed walls, and travertine floors to give the appearance of a softly-worn, aged space.

In an adjacent shower area, Pearson and Bruce worked together to choose a variety of tile colors and patterns to complement the bathroom’s classically inspired look, opting for a mix of warm travertine and onyx inset with a Renaissance Florentine border.

The final effect, says Pearson, is a slight conglomerate of styles similar to how manor houses evolve over centuries. “The impression is that the rooms could have been decorated or redone during different eras,” he says. “It’s reflective of history rather than locked in time.”

END_OF_DOCUMENT_TOKEN_TO_BE_REPLACED 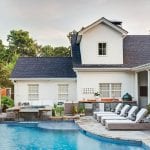