Subscribe Today
Home / Articles / A Garden for All Seasons

On the banks of the Little Red River, Kay Kelley Arnold invites guests to savor the beauty of a year-round garden 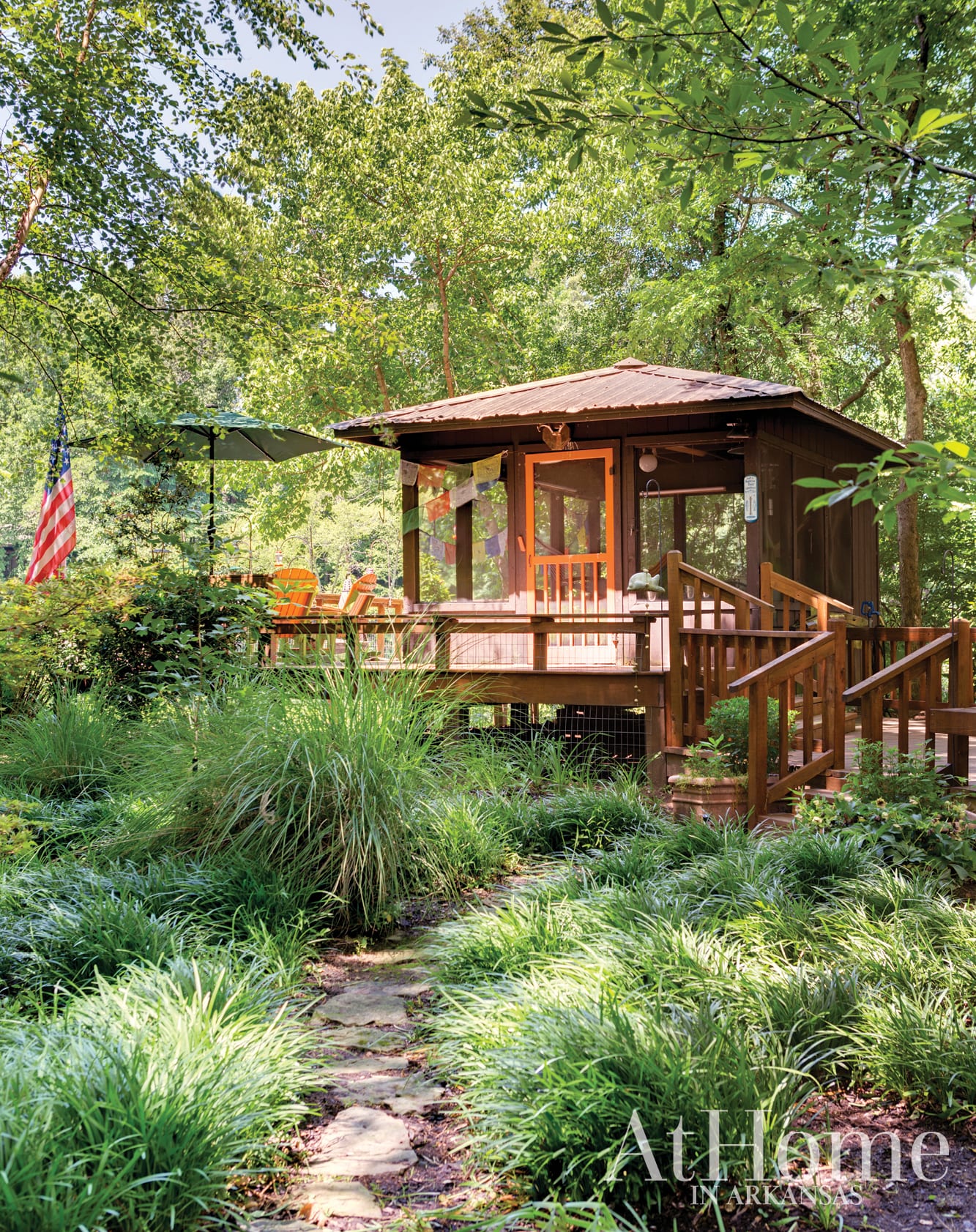 Upon driving up to Kay Kelley Arnold’s Heber Springs getaway, one might assume the landscape is the result of decades of work. The property, which includes a spacious fenced-in garden and greenhouse situated alongside the driveway as well as a pavilion and screened-in sleeping porch overlooking the Little Red River at the back of the site, is bathed in shades of green accented with seasonal color—or lack thereof, depending on the time of year you visit.

However, with the exception of the trees, the majority of the garden has taken root within the past 10 years. After purchasing the property, Kay, along with Wade Rodgers of Heber Springs’s Pro Landscapes, began to select the plantings—starting with the back path, moving to the main beds in the front, and then onto the recently added pavilion—piece by piece and implement their plan accordingly. “It was a yard—not a lawn, if you know what I mean—and it was really just where we parked the cars when we had a big party,” Kay says of the space that is now the front garden. Similarly, the screened porch was in place, but the pavilion and fireplace are two new features Kay dreamed up after hosting gatherings for friends and realizing she could enhance the space for entertaining. 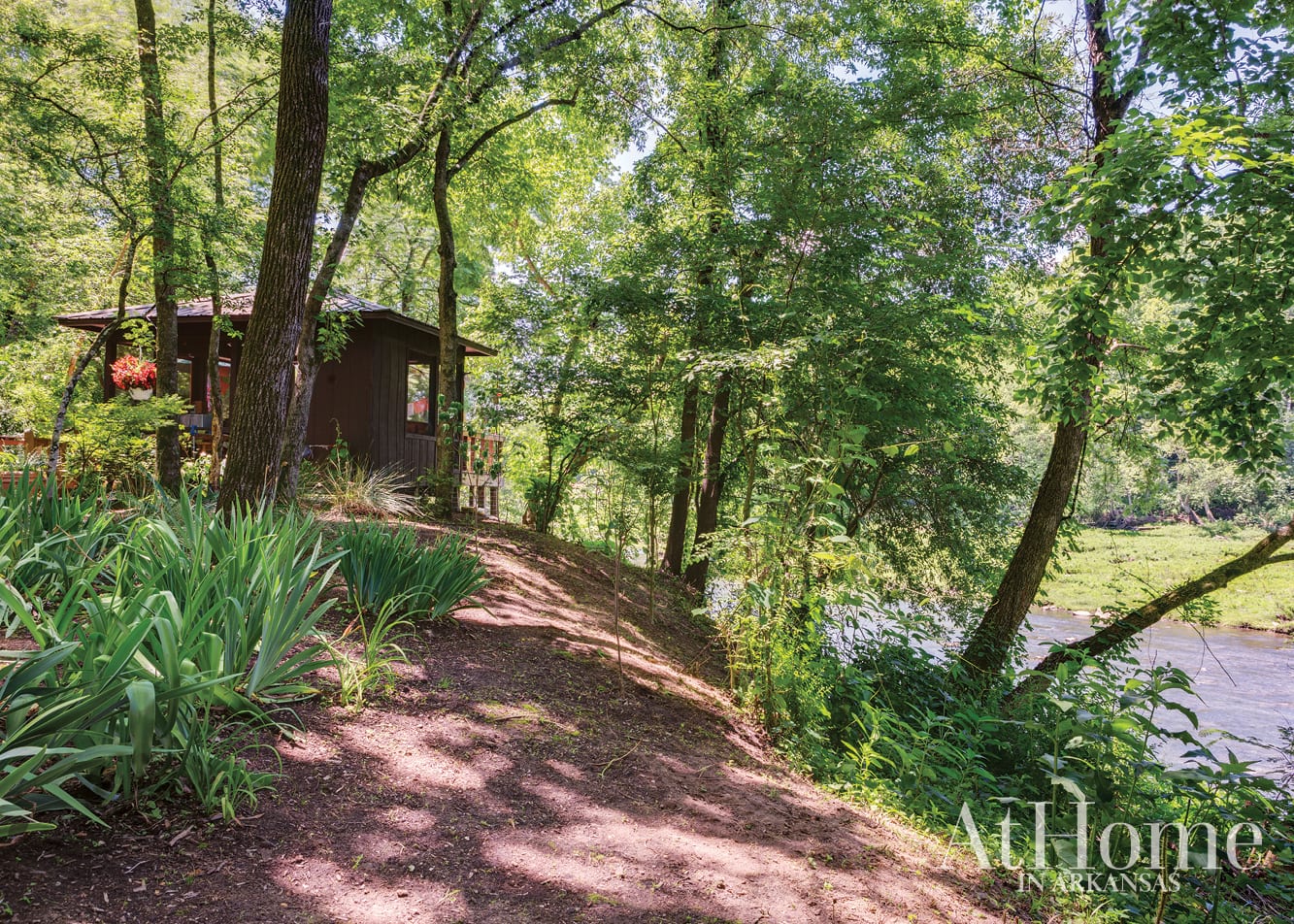 Above: Daylilies line a path that leads from the cottage to a porch overlooking the Little Red River.

Just as it’s now hard to imagine this piece of land without an overflowing garden, it’s difficult to think Kay was new to gardening before this project. “I didn’t know much about it,” she says. “My mother always gardened. We had a big yard growing up, but I was always in school or working and didn’t have the time.” The Heber Springs native, who now splits her time between the river retreat and her condo in Little Rock, was eager to learn once she retired. 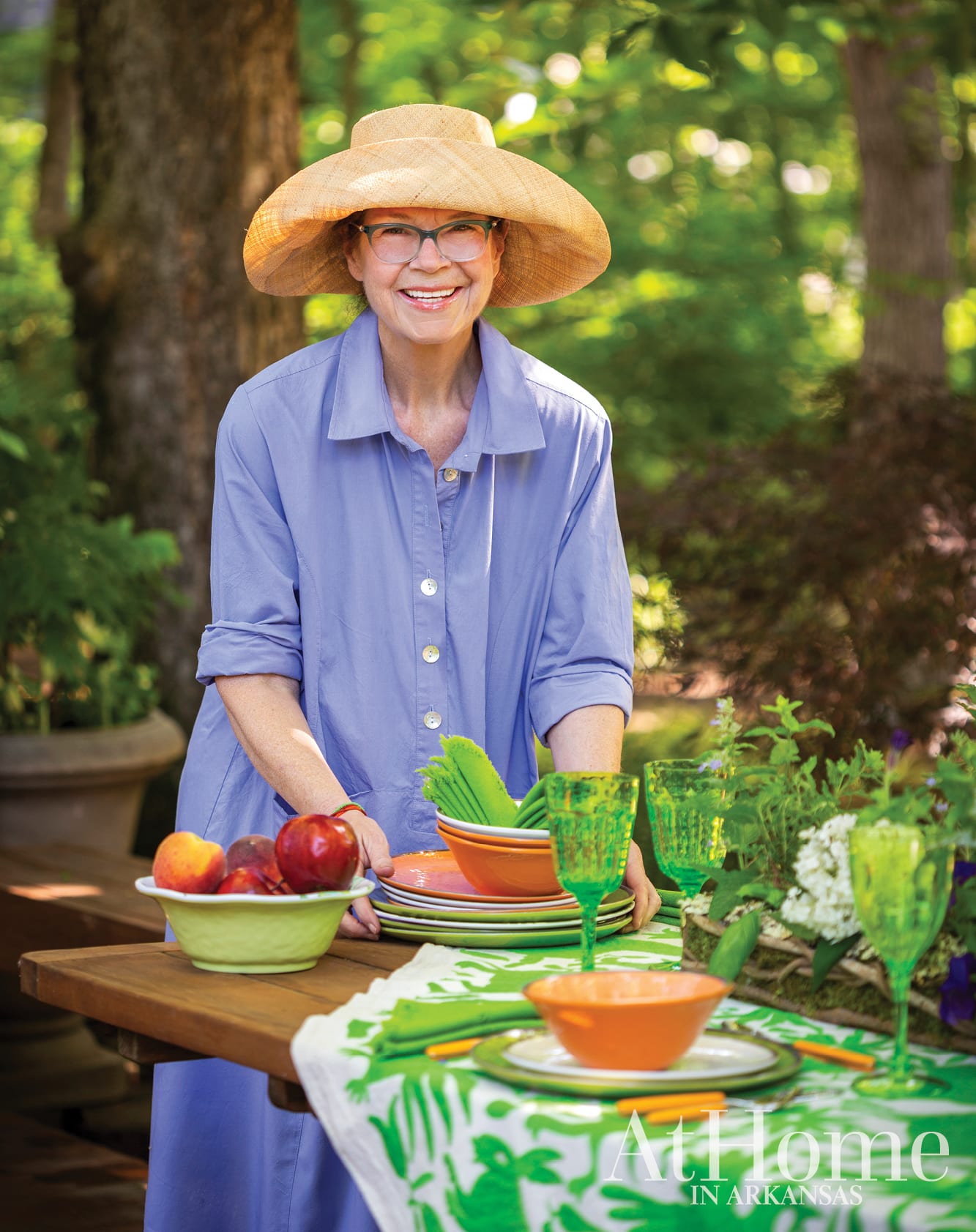 “One of the things I love about gardening is it’s a process. For instance, at the start of the year the seed catalogs come in, and you start looking over those. There’s a structure, and that’s very appealing to me,” she says. “There’s really not instant gratification. You plant things that you may never enjoy, but you know you’re planting for another generation. Learning this type of patience is, I think, helpful. And in a garden you have to be patient; you don’t have a real alternative.”

Approaching her garden from a year-round point of view has inspired Kay to enjoy it at all stages. “In the wintertime, it’s still beautiful to me even though there’s not a leaf or a flower to be found. There’s sort of a bone structure to it that is attractive, and I think, oh, what it’s going to look like, and I get pleasure thinking about that. I feel the plants have a real integrity at every stage.”

Kay also notes she doesn’t do all of the work. “I’m just the beneficiary of it,” she says, pointing to the efforts of Wade and his team as well as the numerous pieces from local artists, including Hank Kaminsky, Michael Reese, and Corky Baker of Urban Forge, scattered throughout the space to bring vitality throughout the year. “I wanted a place with originality and creativity—and I think I got it. Otherwise, I’m known as the crazy old lady with the garden … affectionately, I hope!” she laughs. 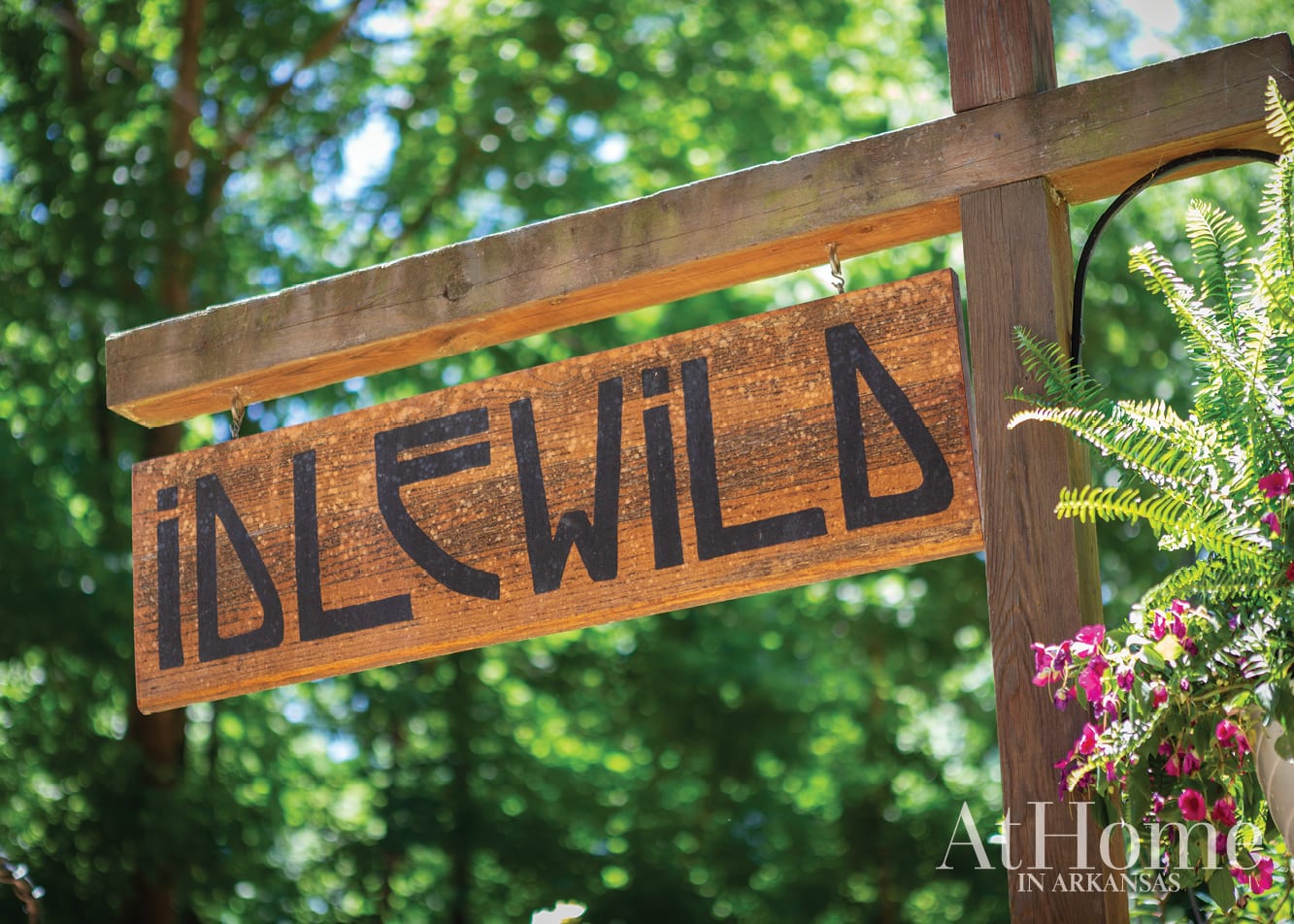 What’s In a Name
Kay is of the belief that all good retreats need a name. Inspired by friends who had a getaway on the Little Maumelle River known as “Idlewild,” she christened her vacation home with the same moniker. “I thought we needed a camp Idlewild for this remote location of the original,” Kay says. “The use of the term Idlewild is also abundant in literature and history, but I just liked the idea of it being both ‘idle’ and ‘wild.’” 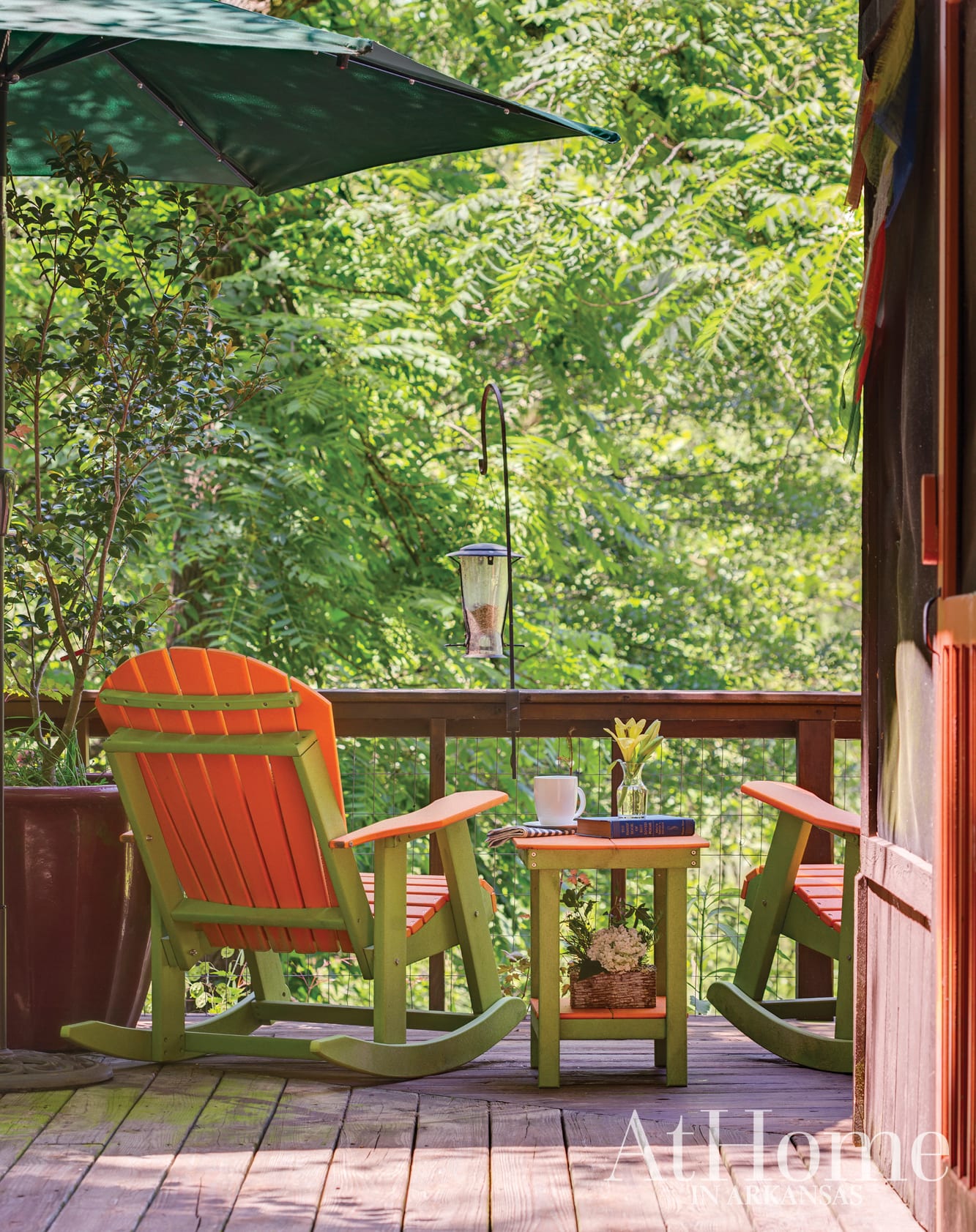 Sit a Spell
A screened-in sleeping porch was pre-existing when Kay purchased the property. It offers the perfect perch to look out over the water and reflect, plus, it’s a great place to post a bird feeder. Orange-and-green Adirondack-style rocking chairs mimic the palette seen throughout the outdoor living spaces. “I like orange; it’s one of my favorite colors, and I thought it would be something different,” Kay says. 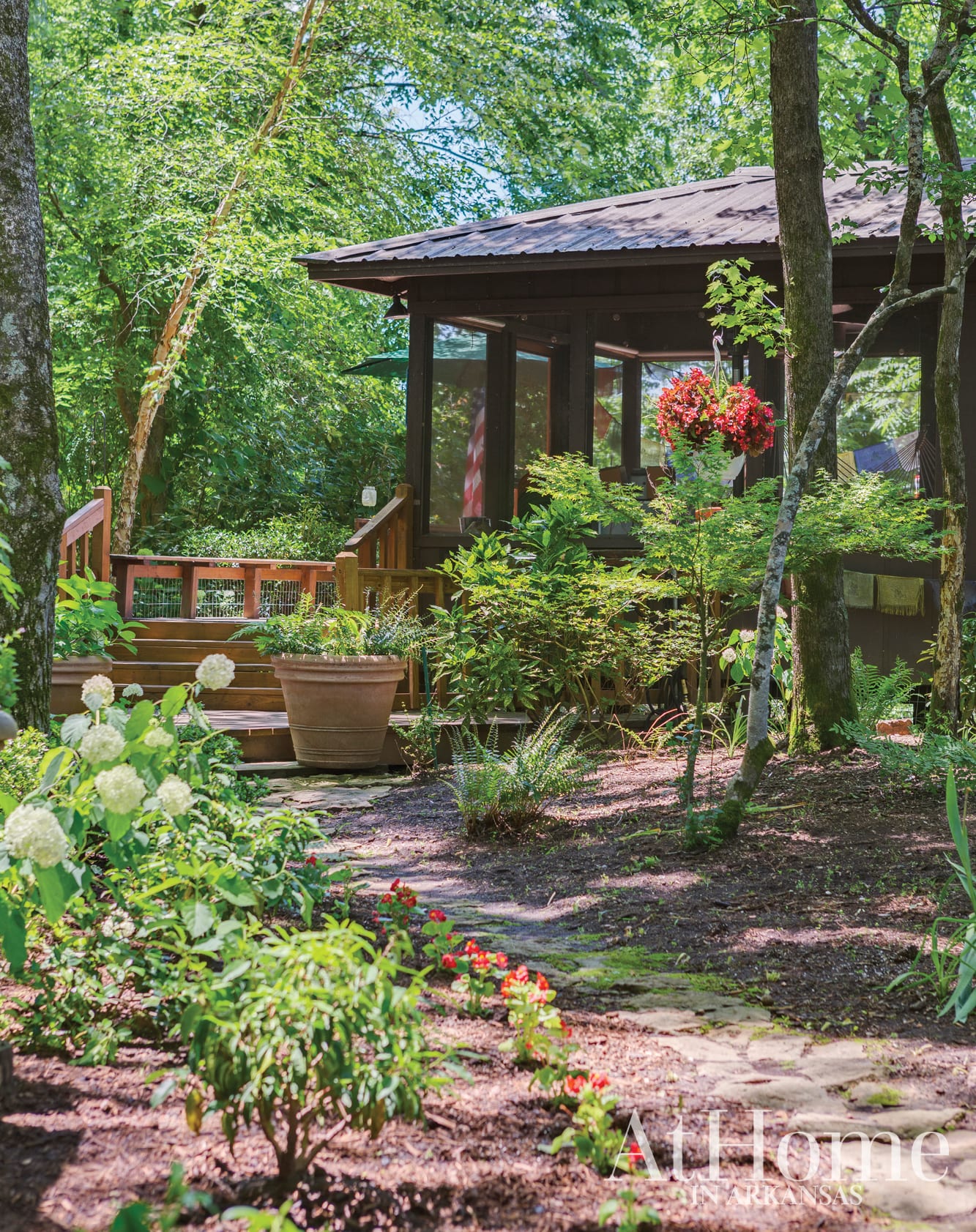 “It’s not a formal garden; it’s just a casual cottage garden so there’s a lot of room for mistakes and room to change to your mind. If you try something and you think, oh, this is going to be perfect, and then it doesn’t work there, it’s OK.”
—Kay Kelley Arnold 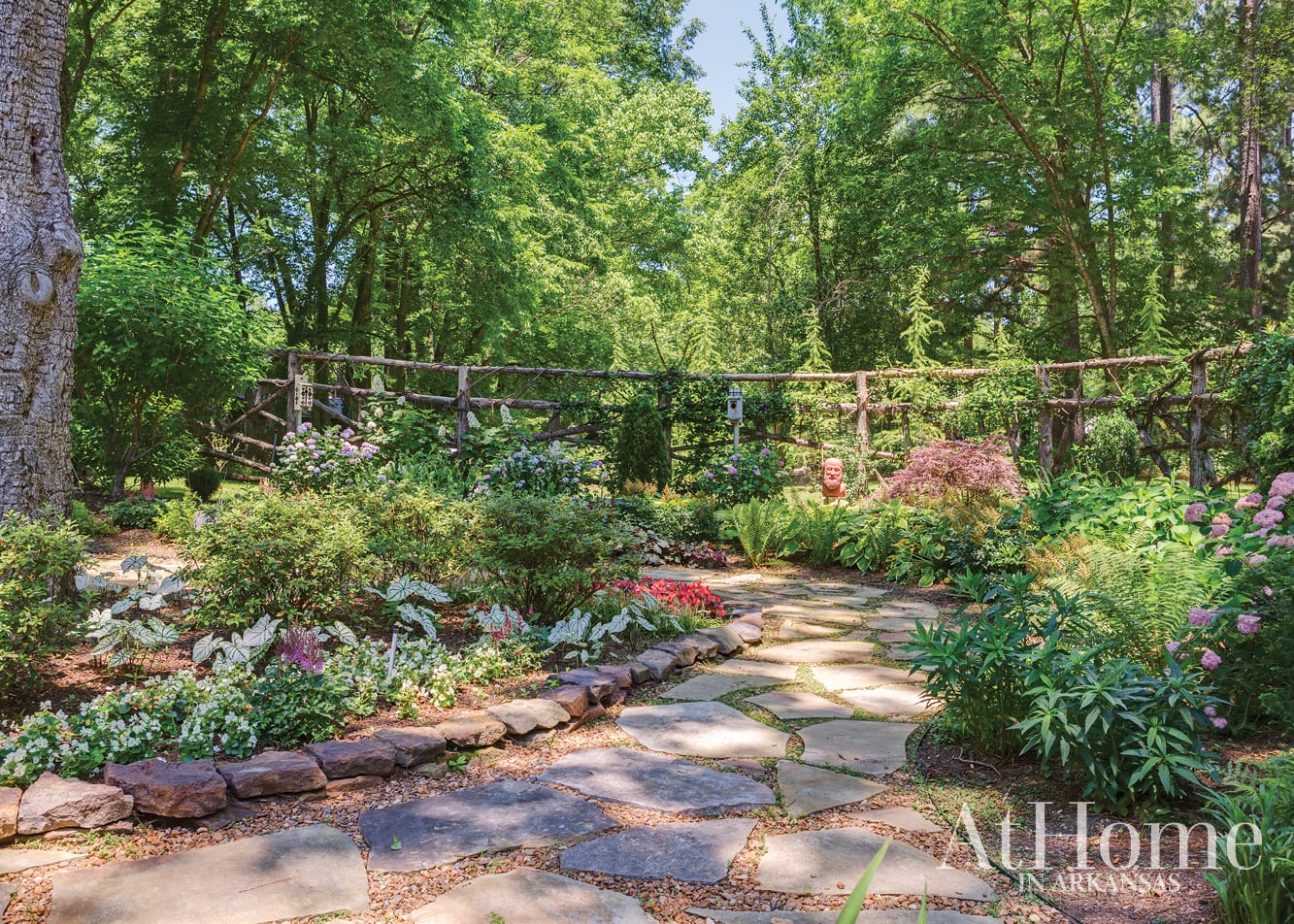 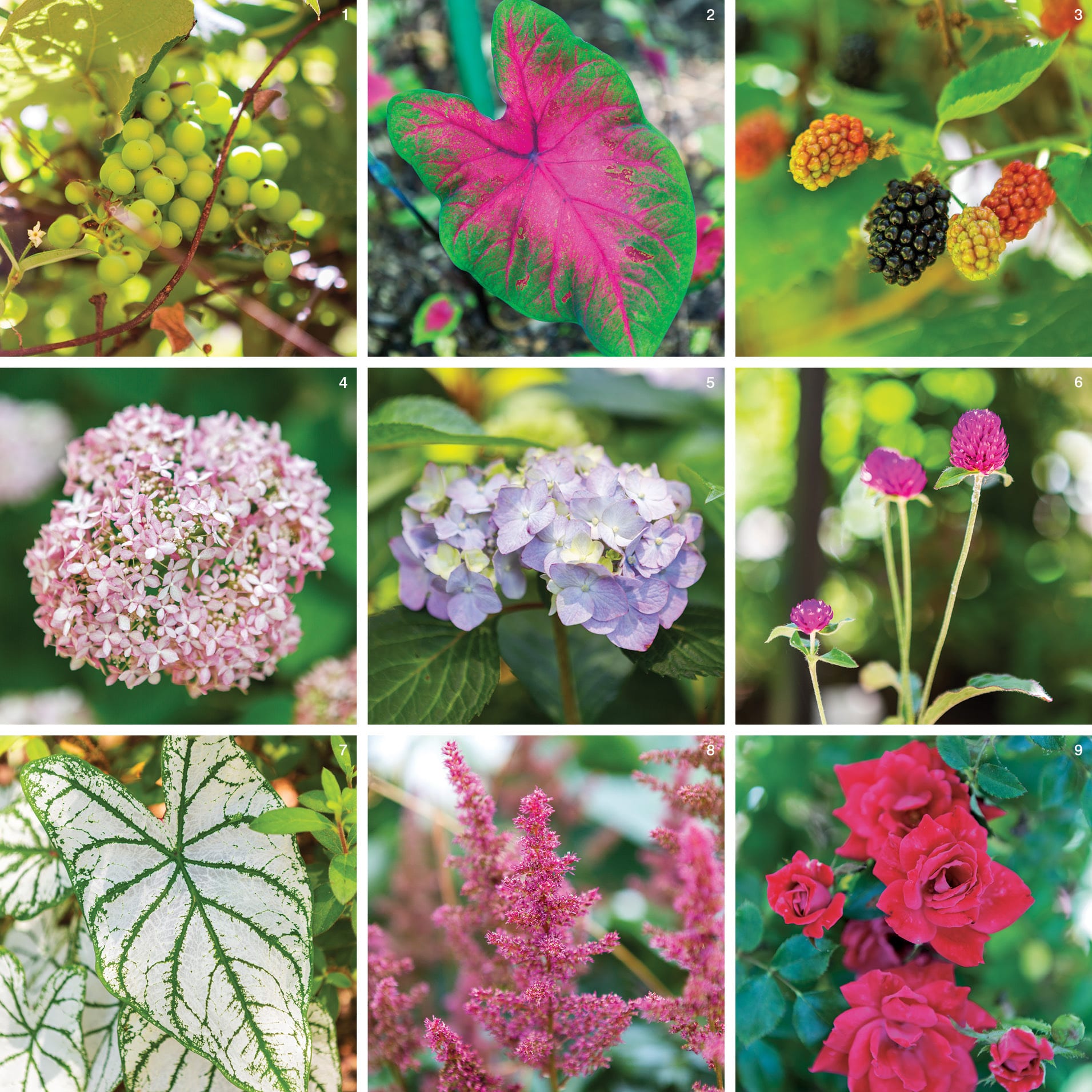 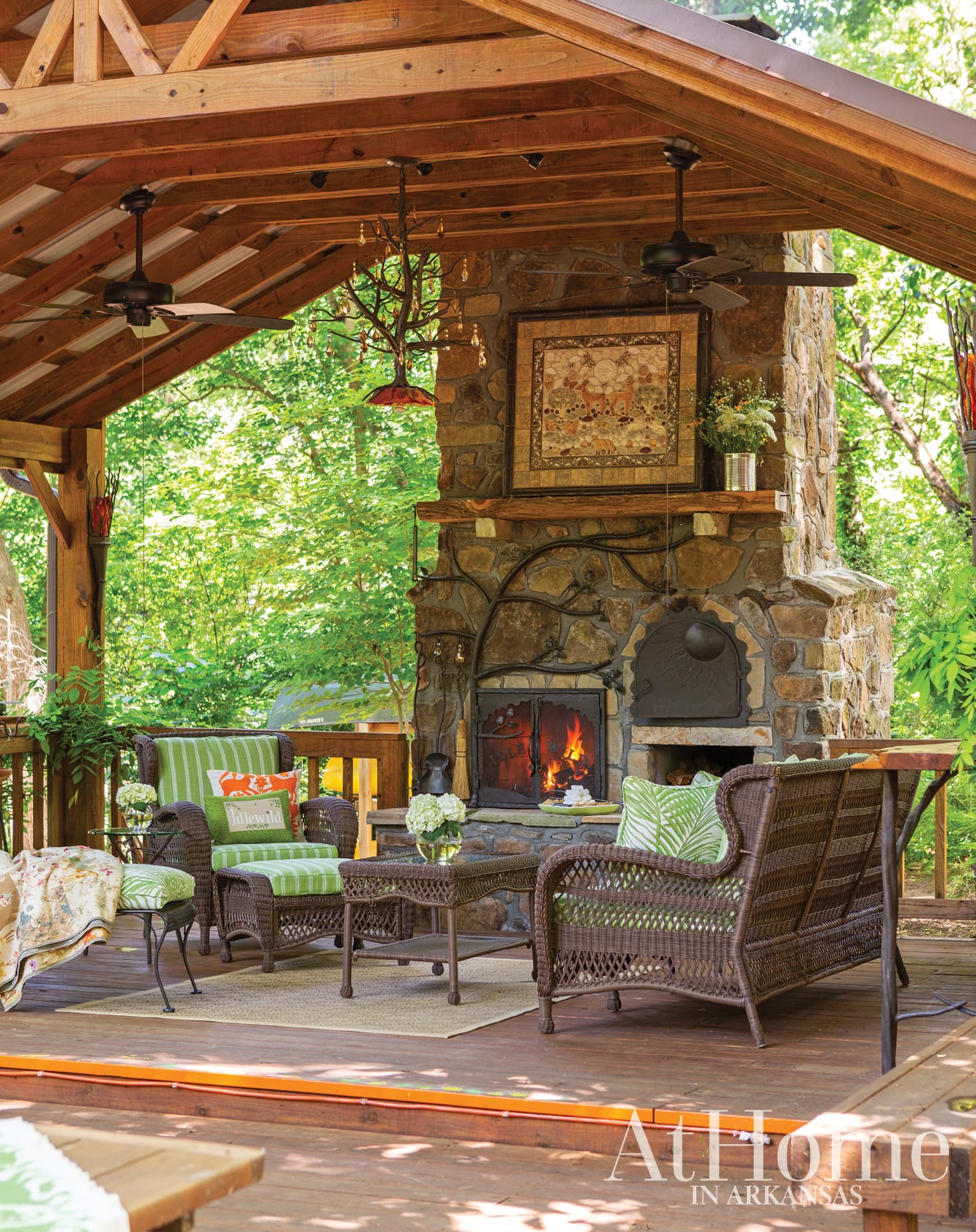 Gathering Place
Situated in between the cottage and the river is the newest addition to the garden, a covered pavilion with a custom outdoor fireplace and wood-fired oven. “I went to cooking classes at the John C. Campbell Folk School in North Carolina and learned to cook in a wood-fired oven. I had to have one of my own when I came back,” Kay says. Architect Bennet Dunkley, a friend of Kay’s who is based in New York, designed the space. The furniture as well as the chandelier and custom ironwork seen around the fireplace were locally made by Urban Forge in Mountain View. On the mantel is a mosaic by North Carolina artist Lisa Tevia Clark, whom Kay met during her time at the folk school. “I went into her studio and this piece had all of the animals I have on the property—deer, red foxes, rabbits, butterflies, and birds. Every animal I see on my property was in there, and I had to have it for the fireplace,” she says. 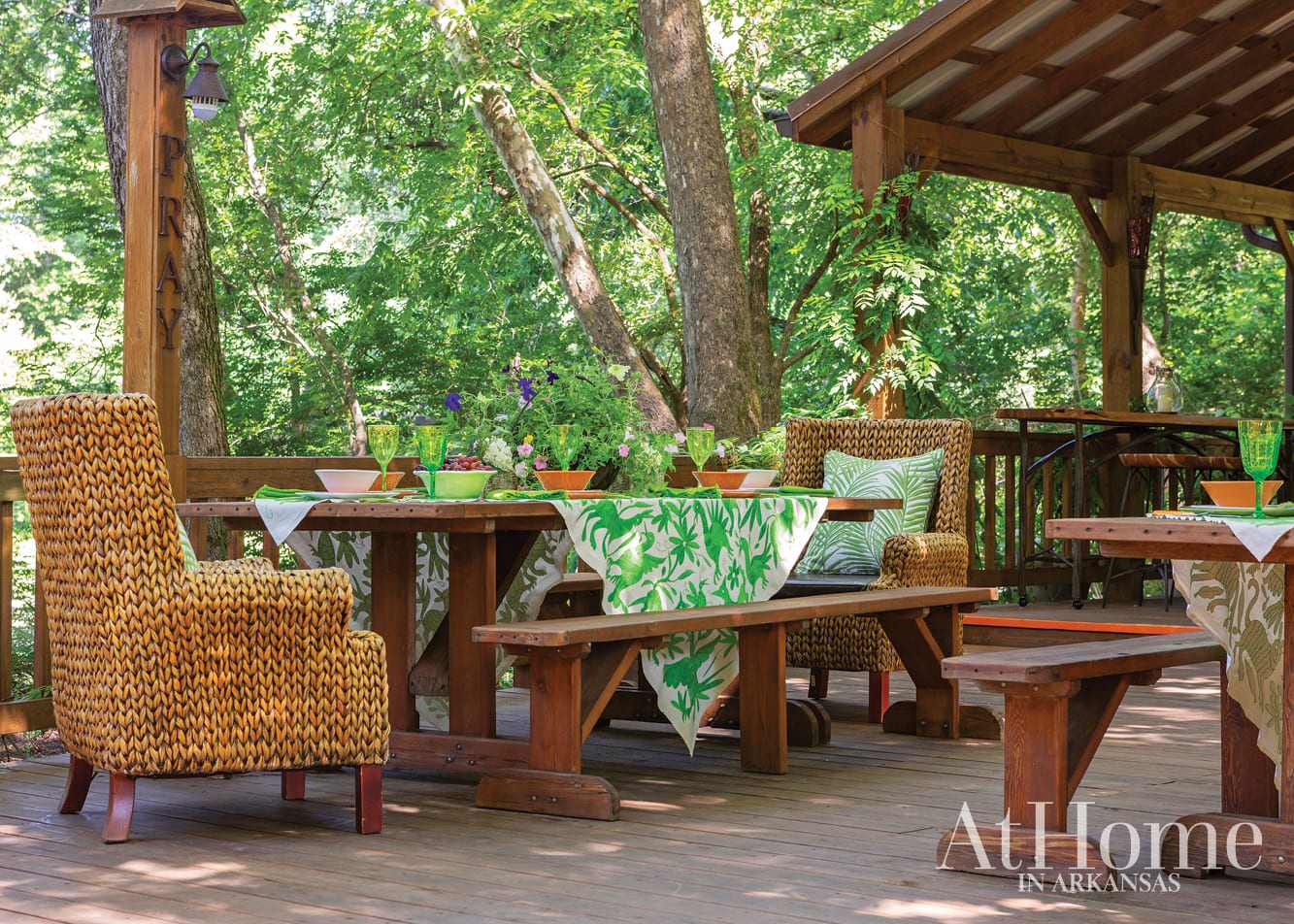 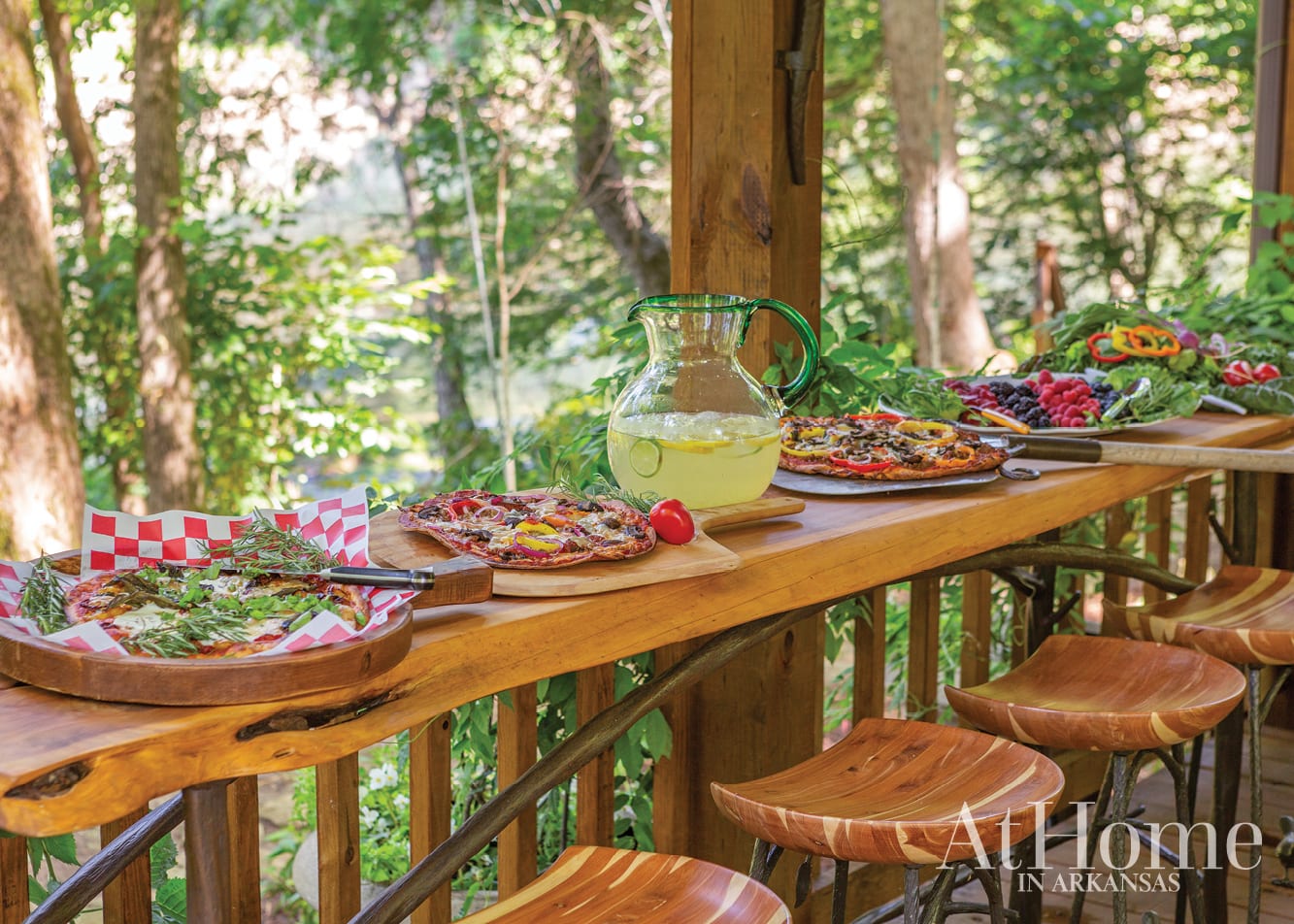 Casual Dining
Guests often dine on pizza from the wood-fired oven while sitting along the bar overlooking the river. “I want this place and the parties I host here to be casual, fun, and easy, so people don’t feel like they have to come at a certain time or leave at a certain time. They can just enjoy themselves,” Kay says. 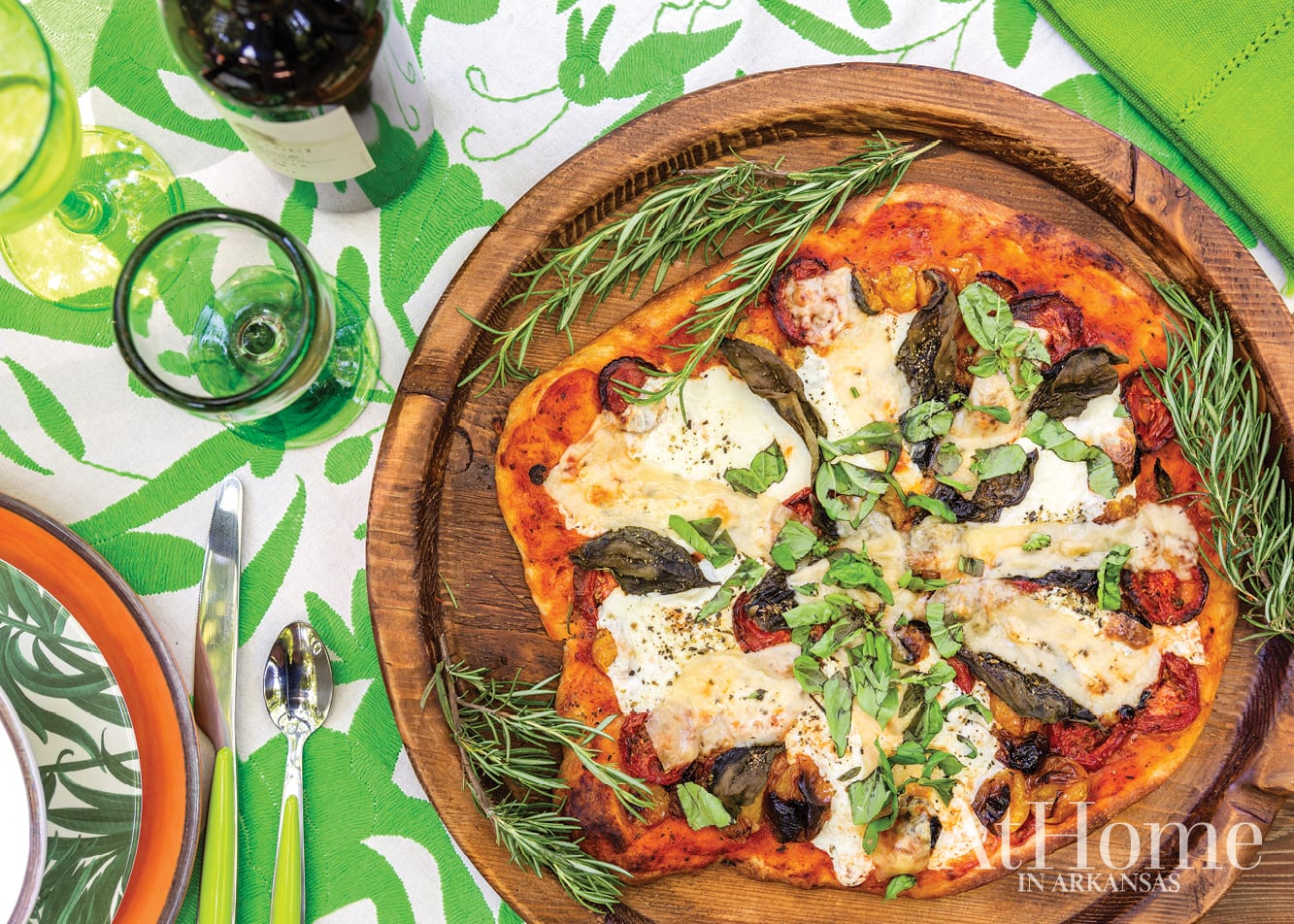 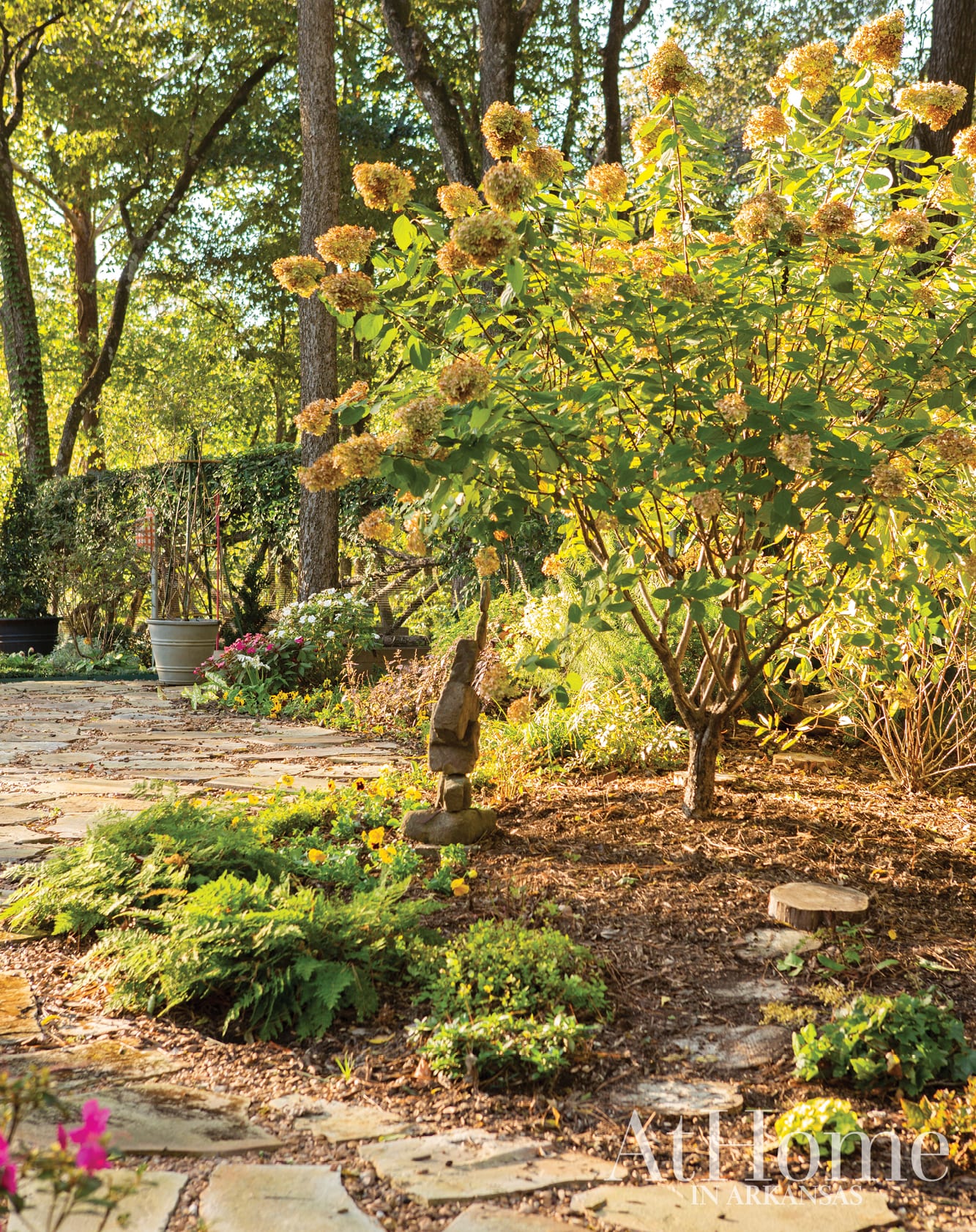 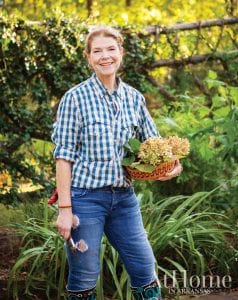 In the ‘Limelight’
Autumn brings the last blooms of the ‘Limelight’ hydrangea tree, which Kay clips to use on her table or give to friends. This tree is special as it came from her parents’ former home. “When they moved we dug up as many of the plants as we could, including some rose bushes my grandmother had grown and this hydrangea tree,” Kay says. “At the time when my mother bought it, she was the only one in town who had one. People would stop to ask, What is that beautiful tree? Where can I get one of those?” she recalls of the shrub, which is now more readily available in local nurseries.

“I’ve learned the garden is a work in progress. There’s never a time when it’s done, and that’s OK because it gives you an opportunity to be creative and do fun things and learn.”
—Kay Kelley Arnold 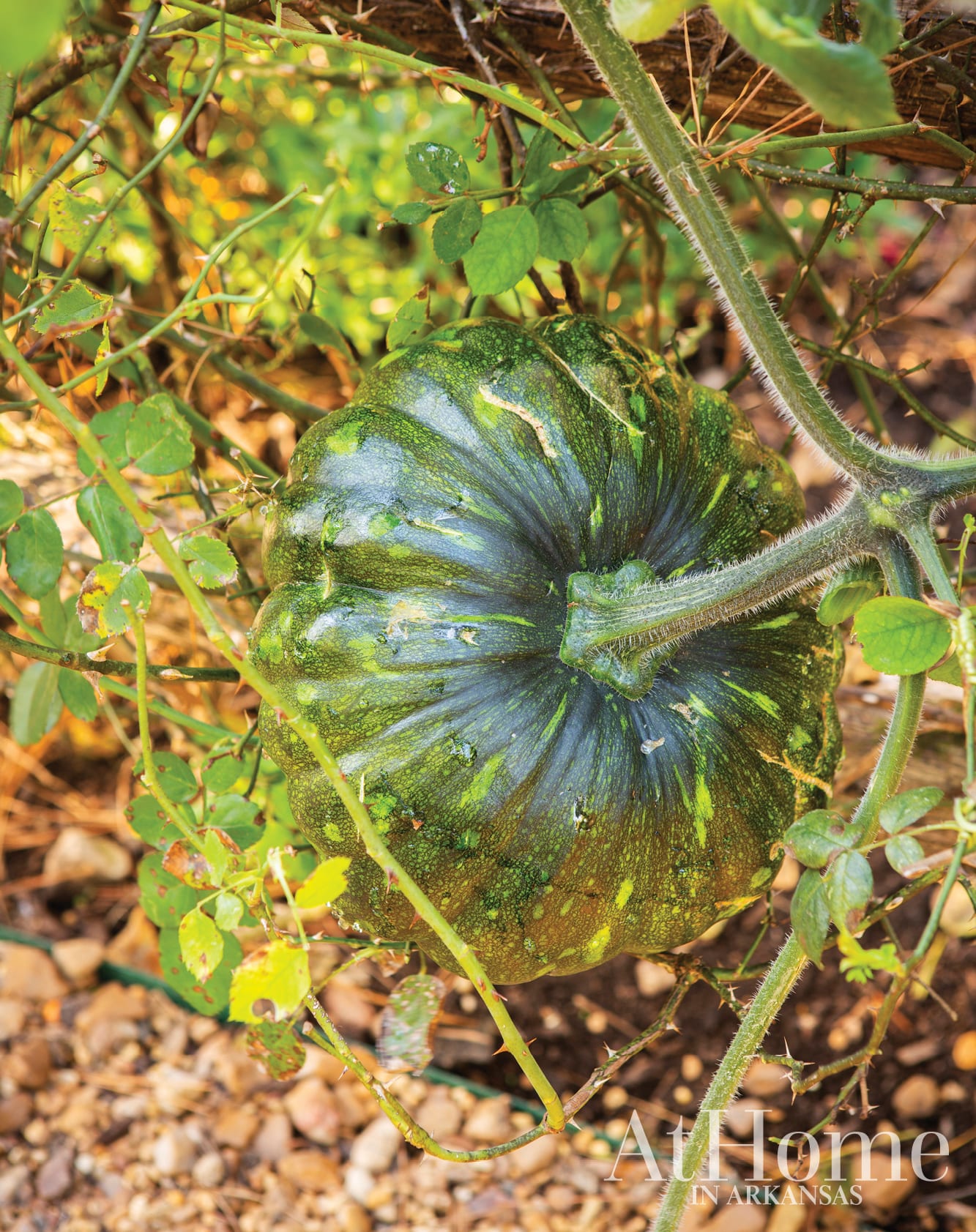 Eat Your Veggies
The garden is home to a variety of gourds during the autumn months. However, Kay admits she doesn’t grow all of her own produce. “I’ve learned there are some things I can buy at the farmers market that taste a lot better and are a lot cheaper than what I could grow,” she says. Aside from gourds, other edible plantings throughout the year often include asparagus, new potatoes (“There’s nothing better than a new potato fresh from the garden,” Kay says), spring peas, lettuces, and herbs. 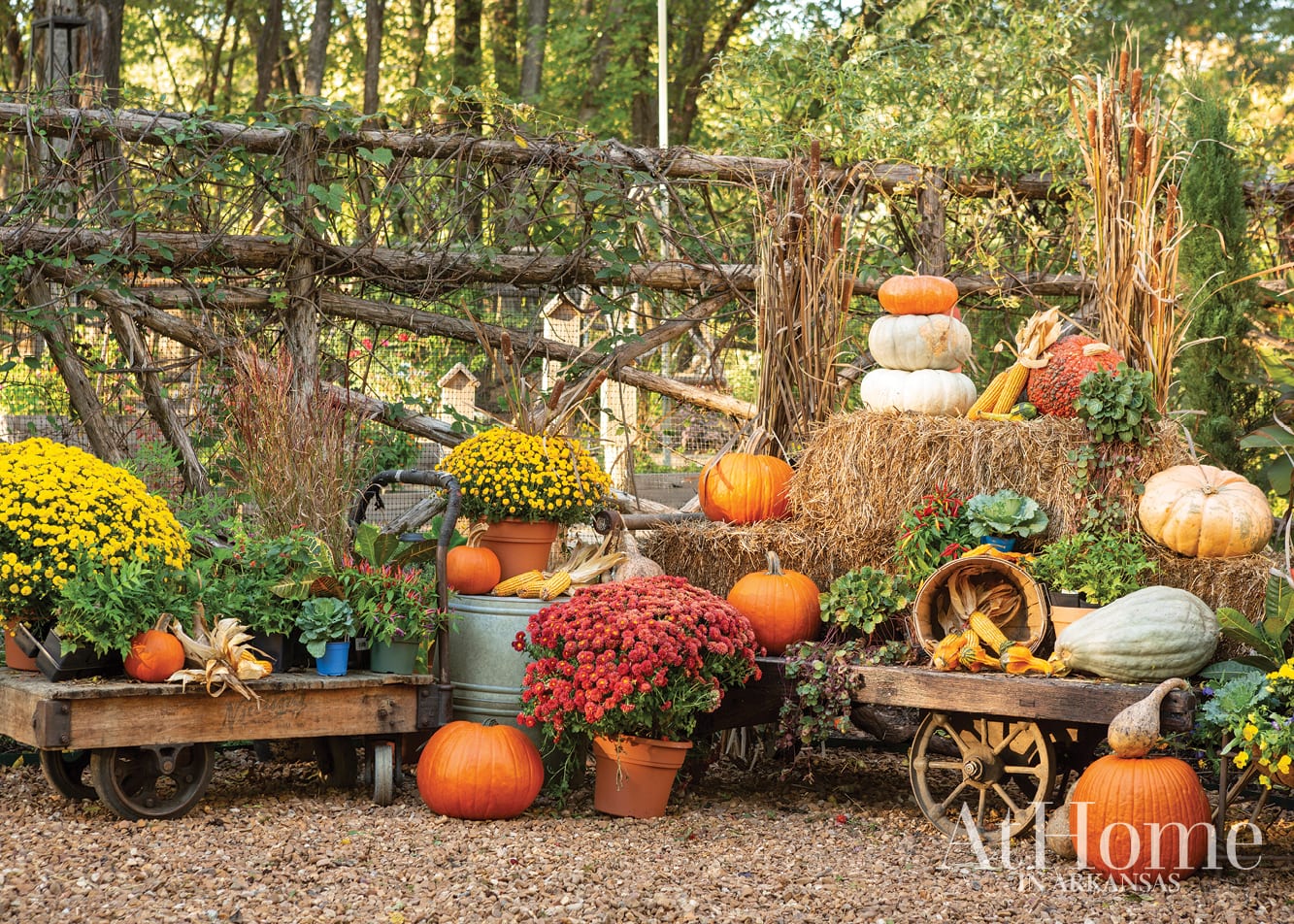 Fall Focus
During autumn, Kay focuses her efforts on cleaning up the garden, pruning anything that needs to be cut back, and pulling out any plants past their peak. She also mulches around plants that need an extra layer to survive the winter. However, the seasonal color is far from gone. “I host a soup party for 75 people in the fall, and I use lots of mums and gourds to decorate for that gathering,” she says. 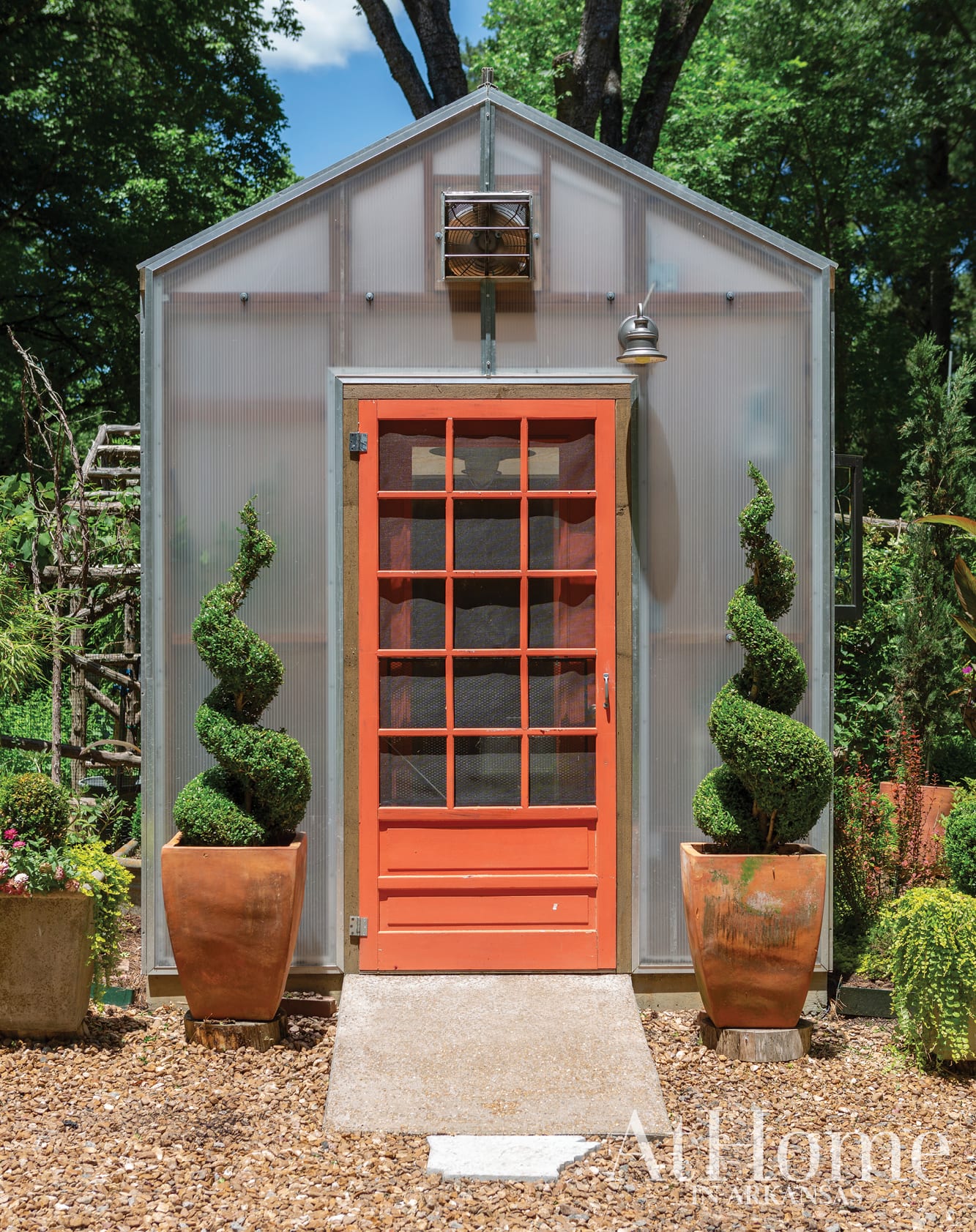 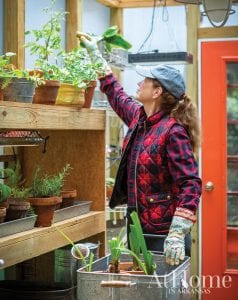 Winter in the Greenhouse
Kay’s friend, architect Bennet Dunkley, also designed the greenhouse, which matches the style of the nearby pavilion. It’s here that the planning and prep work for the year begins. “Wade and I meet to go over everything at the start of the year, thinking about what we want to do again and what we want to change,” Kay says. “In particular, we discuss what we want to put in the greenhouse to get a head start.” In addition to the just-started seedlings, hibiscus, kumquat trees, and even lemon and lime trees are often overwintered in the greenhouse.